by Ana Murcho and Joana Rodrigues 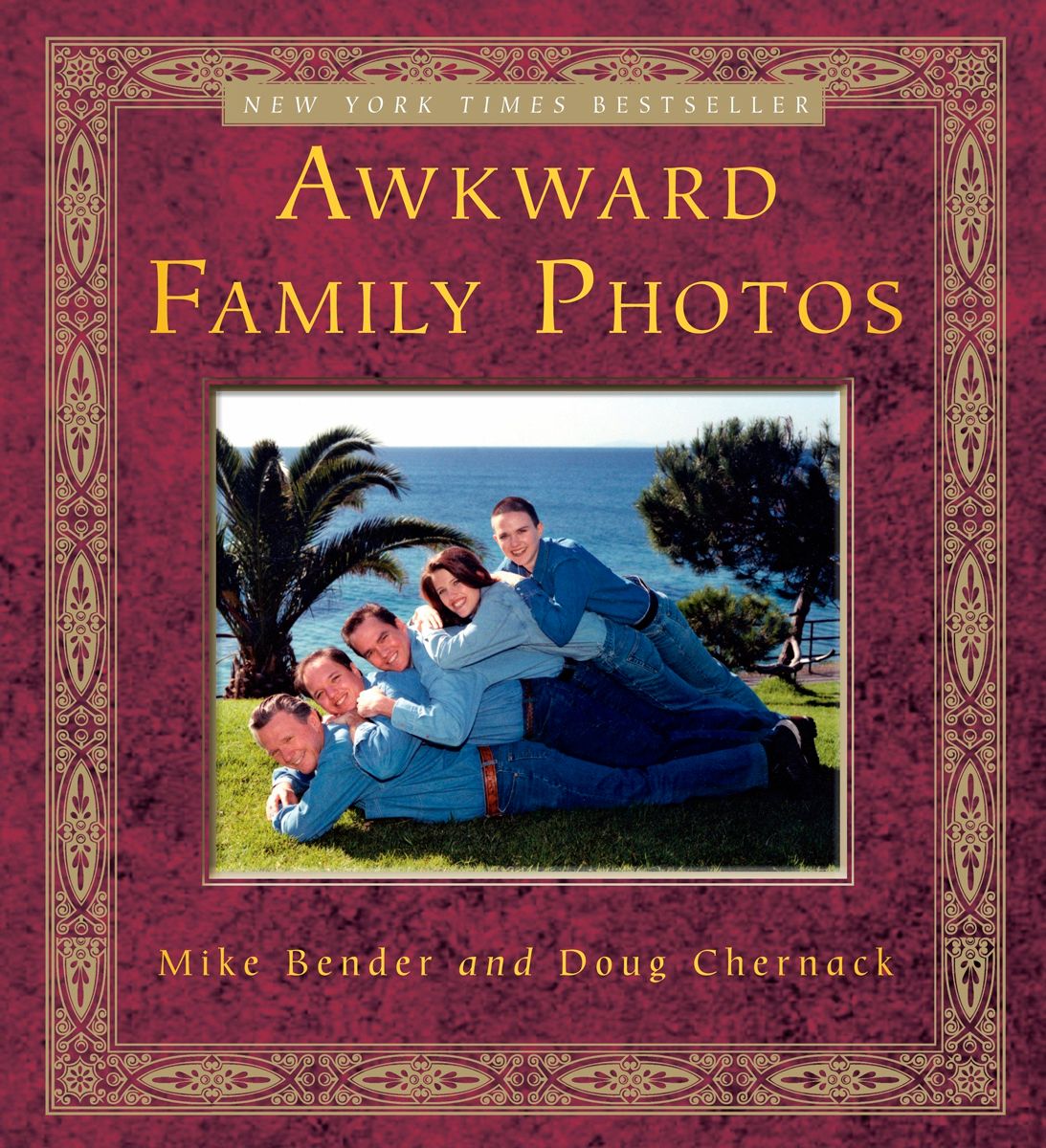 It’s stupid not to read this…

Close your eyes and picture this: it’s more or less 30 degrees and you’re at the beach, a giant Berliner (with cream filling) in hand, there’s no breese, the sound of the waves seems like a Beethoven symphony, the kids are napping. In between a dive and a racquetball game, why not read an (apparently, just apparently) idiot book?

It would be stupid not to watch…

The suggestions we bring you go beyond dumb, mindfuck or idiot. The path through the spectrum of stupidity goes from the purposefully imbecile to the inexplicably good. We promise you’ll cool off, and feel a certain vicarious embarrassment from the stupidest movies and shows from the last 80 years.

We don’t know whether to laugh or cry - that’s how these movies make us feel. Many of us remind us of the dumb jokes our friends’ dads love to make, because they’re “so fun”: they’re so idiotic that they’re kind of funny. Stupidity is everywhere, even in the seventh art. Actually, it may make sense to begin this journey with the productions exclusively dedicated to the cult of the stupid. With that being said, could there be a better starting point than Jackass: the Movie (2002)? The movie follows the same lines as the MTV show that originated it, and it was an astounding world success for elevating stupidity to never before seen levels. In the cinematic version, a kind of homemade documentary with no defined script, the pranks and stunts (“performed by professionals”) are still there, and that’s what makes it a hit. Something similar happened with Sausage Party (2016), which deserves an honorable mention. The cartoon characters deceive the most innocent ones, who certainly did not imagine the mockery and evilness that would be if food had a soul - yes, even processed and canned.

Stupid can also happen accidentaly: a poorly fundamented plot or a result of low budget, our favorite. Attack of the Killer Tomatoes (1978) was made with a budget of about 90 thousand dollars, nothing compared to Hollywood blockbusters, and it’s exactly what the title suggests. In the same vibe, Attack of the Killer Donuts (2016) tells the story of killer mutant donuts transformed by a chemical disaster. But the epitome of five bucks sci-fi, so to speak, is the unheard of and unmistakable Sharknado (2013), which started a series of eight movies about a hurricane that caused a bunch of tornadoes and… sharks, which start falling from the sky. Yes, you read that right. Someone could write more than one version of this “story”. Moving on. Still in the category of gone wrong sci-fi there’s Rubber (2010), the story of a killer tire. The final product is something extraordinary, but probably not in the way it was envisioned.

In what concerns the profoundly idiotic, The Gods Must be Crazy (1980) is, without a shadow of a doubt, the ultimate cult film. It was responsible for changing the narrative of stupidity, and it’s the starting point for productions like Weekend at Bernie’s (1989).

On the other end of the spectrum there’s what, somehow, manages to be quality content, like The Great Dictator (1940), a satire of nazism and one of Charlie Chaplin’s greatest masterpieces, Being John Malkovich (1999), a movie that is too complicated to explain in two lines - but imagine that you’re inside John Malkovich’s head and you’ll be close - The Lobster (2015), a hymn to nonsense and the meaning of life, and Swiss Army Man (2016), in which Daniel Radcliffe - yes, Harry Potter - plays a cadaver. We finish this journey with the most recent stupid production: Inside (2021), by the comedian Bo Burnham, which is an accurate portayal of what the stupidity of the 2020 lockdown did to each of us. We could continue this list indefinitely, but we’re out of space, so we saved the best for last. Monty Python’s Flying Circus (1969-1974), probably one of the most brilliant TV shows of all time, where short episodes are acted in small sketches, with high doses of the most far-fetching and refined dark humor.

It would be stupid not to visit…

Simone de Beauvoir said that “it is in art that man definitely exceeds himself”. If you think about it, it was through artistic expression that many metaphysical reflections started, which lead entire generations to having existential crises - like the absurdity that was nihilism. But what happens when art becomes ludicrous and loses its sense? Is it still art, or is it just stupid?

Have you ever been curious to see what a hamster or a seal’s penis looks like? If your answer is yes, then this museum has to be on your bucket list. In this place, completely dedicated to the male sexual organ, you can see a collection of over 200 phalluses belonging to almost all mammals in Iceland. The assortment includes samples, preserved in formaldehyde, of whales, polar bears and even human, donated by a 95 year old man. Besides the biological exemplars, the Phallological Museum, in Reykjavik, the capital of Iceland, sums up about 350 decorative objects and practical utensils dedicated to the penile universe. More information at www.phallus.is. 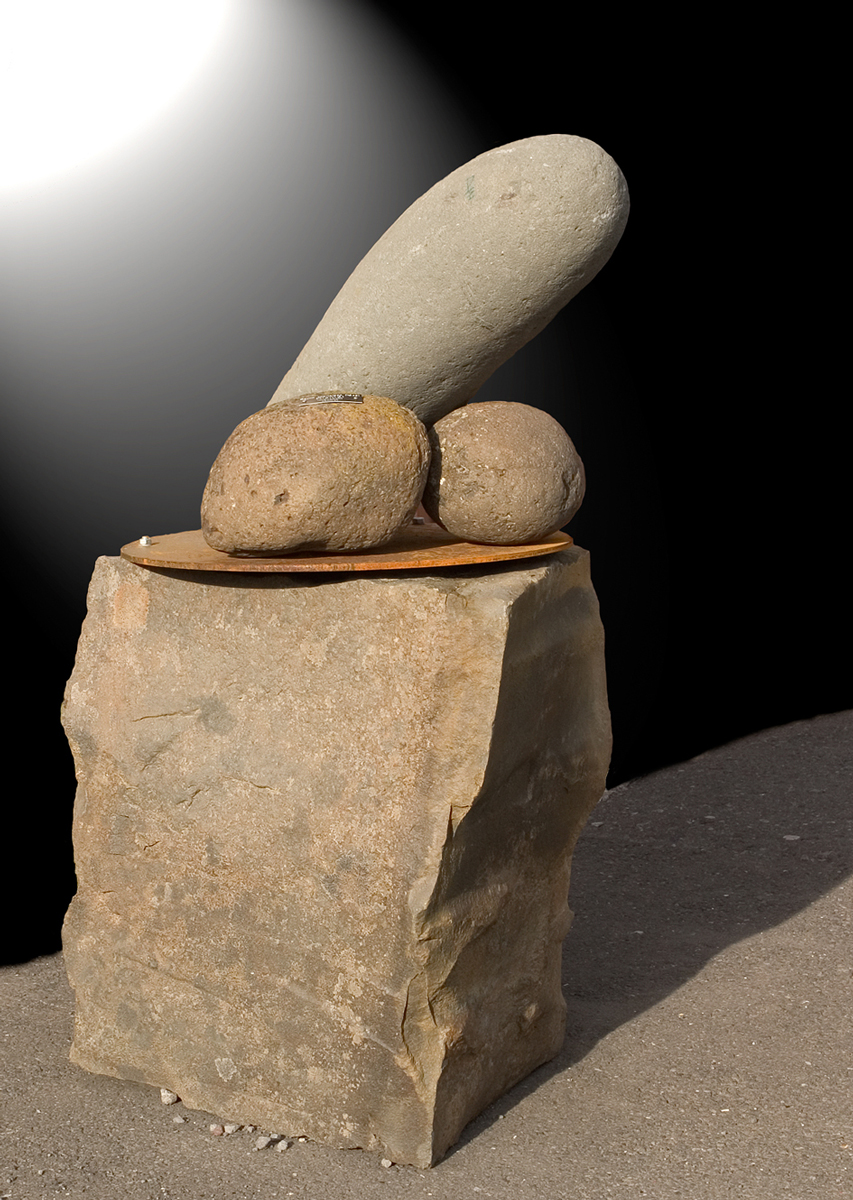 Yes, this museum is just what the name suggests. It’s an opportunity to go down a level and find out what happens underneath the city of light. And no, we’re not talking about the catacombs. Located in the seventh arrondissement, one of the capital’s most elegant neighborhoods, the Sewers Museum will give you the experience of getting to know the history of the metropolis’ sewage system first hand, in a visit with everything you can get - including the characteristic odor. In the end, who never dreamt of going to Paris to see its mysterious underground? More information at www.introducingparis.com/sewers-musem. 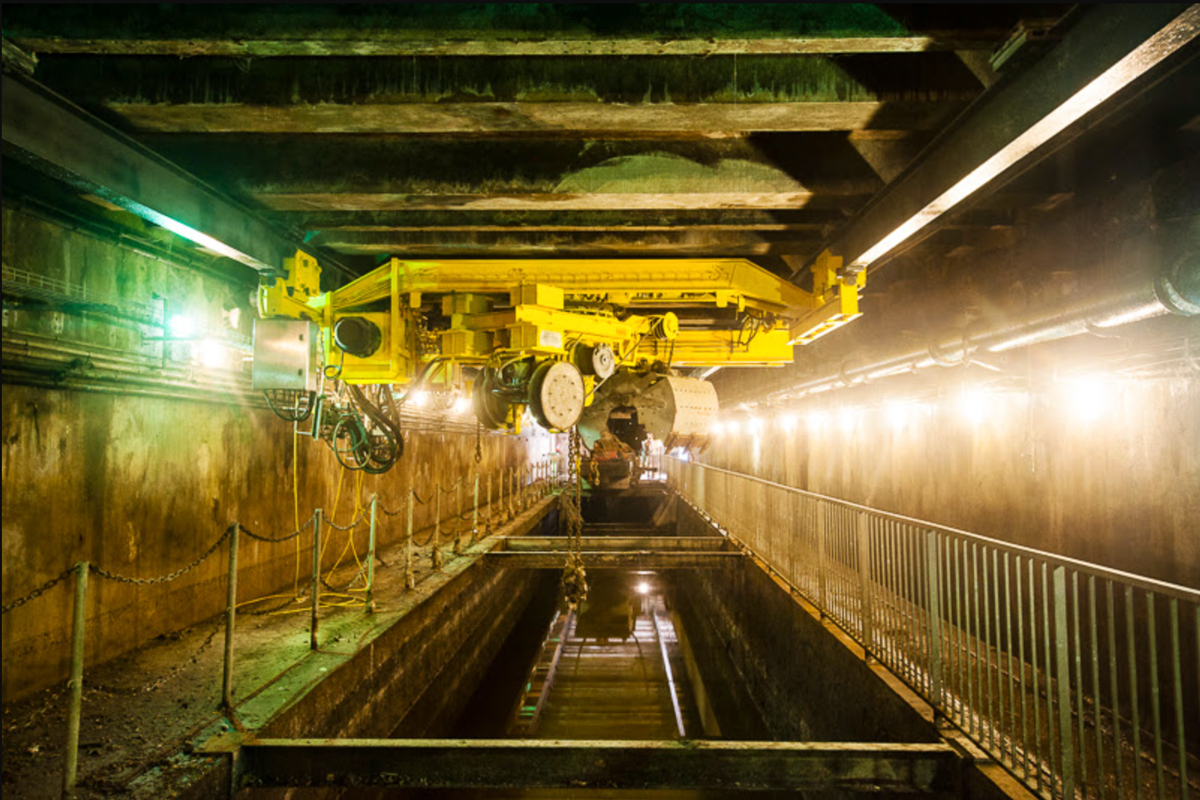 Here, reason is set aside and the absurd is taken literally. Located in Herrnbaumgarten, in Austria, it has a collection of about 487 inventions that have no utility - like a ladder with one step, a deck of see-through cards, or a manual dryer exclusively for socks. If this is one of the points of your itinerary, we suggest you leave the trip to the fall, so that you can participate in the Honor the Sock walk, on october 26th, national Austrian day. The most absurd part of the trail is the single sock memorial, where all widowed socks sent to the museum all throughout the year will be hung. More information at www.nonseum.at.

Museum of the Weird

Everything regarding the bizarre and supernatural is welcome in this establishment in Austin, Texas (USA). In the Museum of the Weird, you’ll be able to see replicas of some nature freaks, like a two headed chicken and several plaster molds of BigFoot. Besides the permanent exhibit of “evidence” of senseless conspiracy theories, the museum periodically holds movie screenings and live performances. It’s not out of the blue that the city’s unofficial motto is “Keep Austin Weird”. More information at www.museumoftheweird.com. 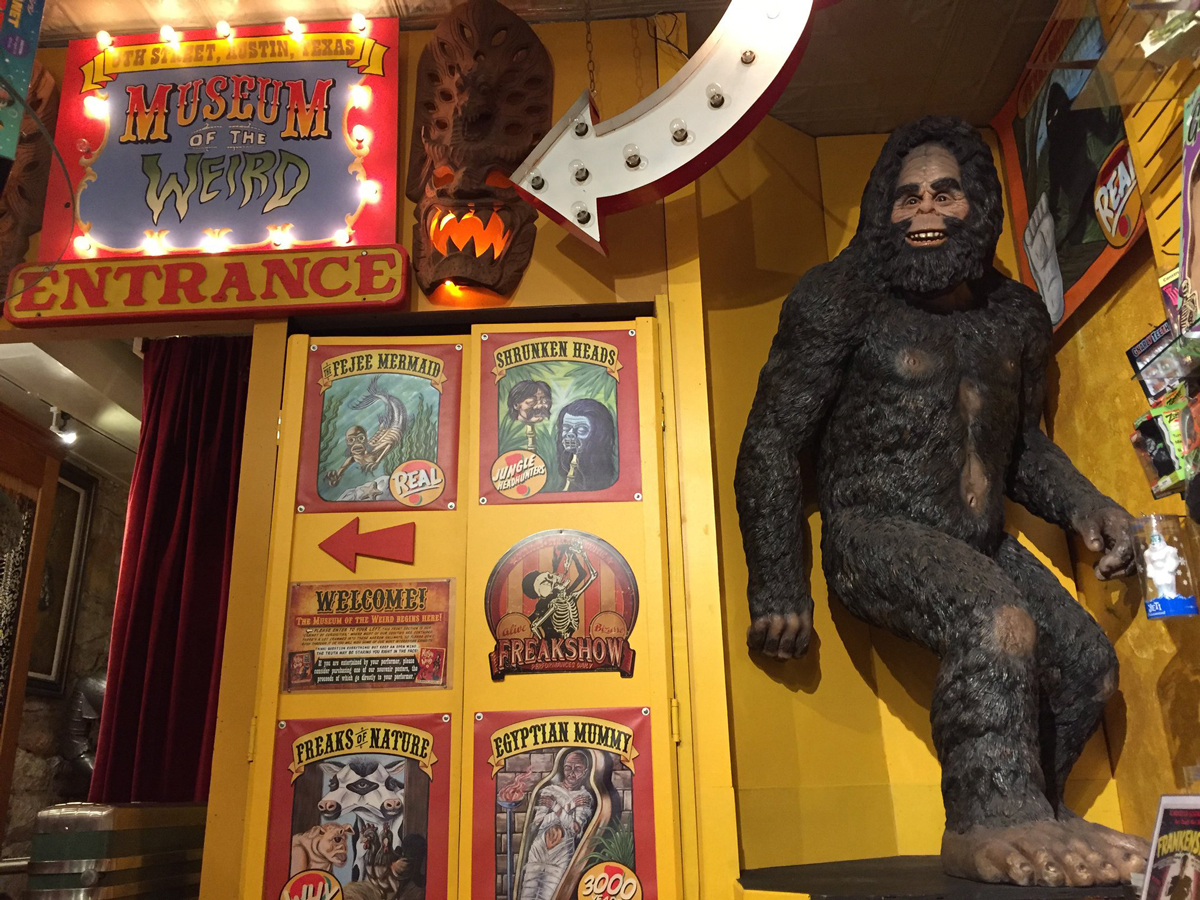 It would be stupid not to stay at…

Don’t you get tired of the everyday routine? Don’t you, every once in a while, think it’s just idiotic and senseless? Even if it’s not possible to travel very far, it’s crucial to take a break. Unplug. Recharge energy and strength. Getting out of the house for a few days might be a good start.

In Praia da Falésia, in Albufeira, this luxury hotel rises above the top of the cliff with a breathtaking view. A well known classic to the lovers of the south of the country, Pine Cliffs Resort offers an enormous variety of choices regarding the kind of stay you’re looking for: scrumptious suites with bold tubs in the middle of the room (which you won’t want to leave, we guarantee), apartments and villas. Everyone has access to the gym, the golf course and the pool(s), where the sunset is legendary. The Serenity spa, one of the largest in the country, offers body and beauty treatments, including new techniques using cannabidiol (CBD). Recharge your energy in this World Luxury Hotel nominated resort, and savor the concept of serenity. More information at www.pinecliffs.com. 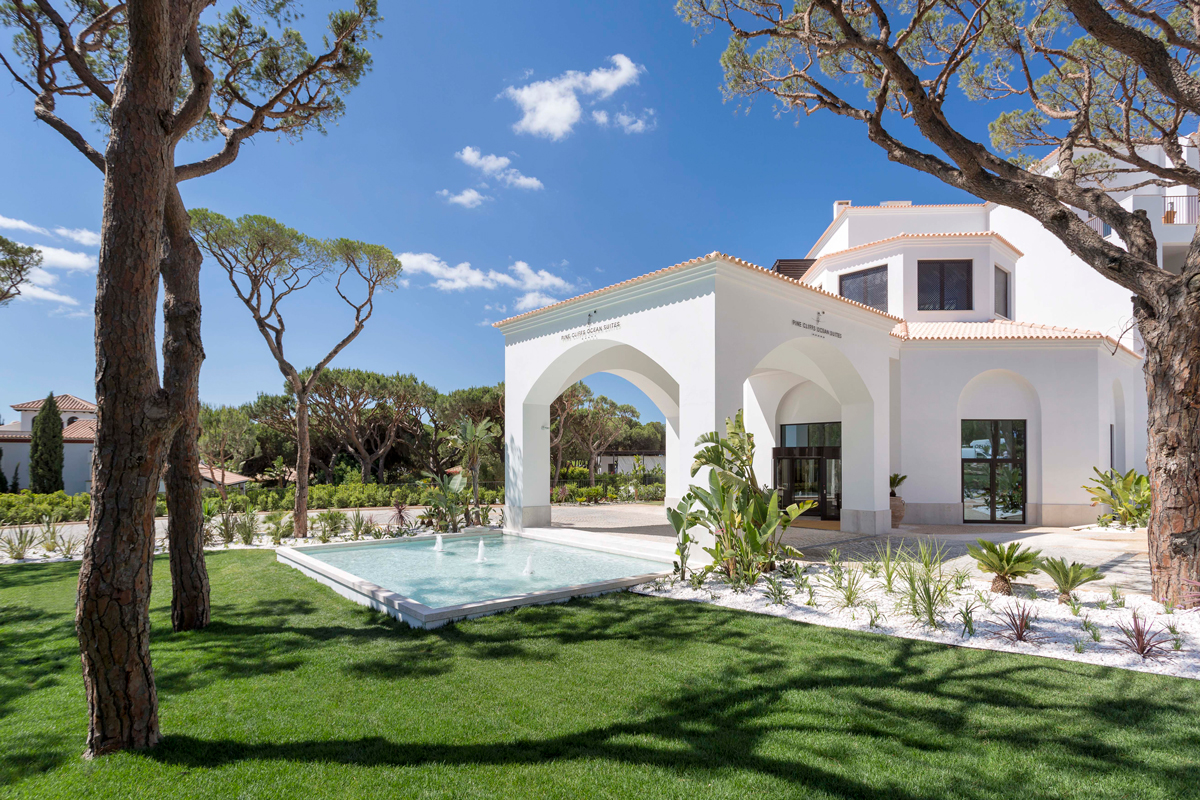 It’s the perfect example of “go out inside”. As soon as you get to this wellness boutique resort, you’ll leave behind each and every problem. Located in a picturesque atmosphere, Quinta da Comporta was thought to provide the most comfort and relaxation to those who seek it - or should we say “find” it? Here there are no clocks and no rush. In the pool villas, with a pool and private garden, townhouses and deluxe rooms, all with a privileged view to the beach or the rice fields, the difficulty will be accepting that, sooner or later, you’ll have to go back to the city. The Oryza Spa offers different body and face treatments, and massages, because health is grown here, the yoga retreats are ideal for a total reset. Besides a restaurant and a bar, Quinta da Comporta also has an exclusive takeaway service, which allows you to enjoy your meal in nature, in the deepest silence. More information at www.quintadacomporta.com.

An 18th century palace is the home of a magical place to escape the routine. More than  a luxurious five star hotel, Tivoli Palácio de Seteais Sintra Hotel is a symbol of the town it’s in, and the decoration (and the rooms) is the mirror to the splendor and romance of another time. All of this was enough for this to be an obvious destination for any travel lover, but there are experiences you’re not gonna want to miss: the Antara Spa has massages and specialized treatments and the Seteais restaurant and Colares DOC room have a rich wine menu. All this in nature, right in the heart of a UNESCO World Heritage site. More information at www.tivoli.com/tivoli-palacio-de-seteais. 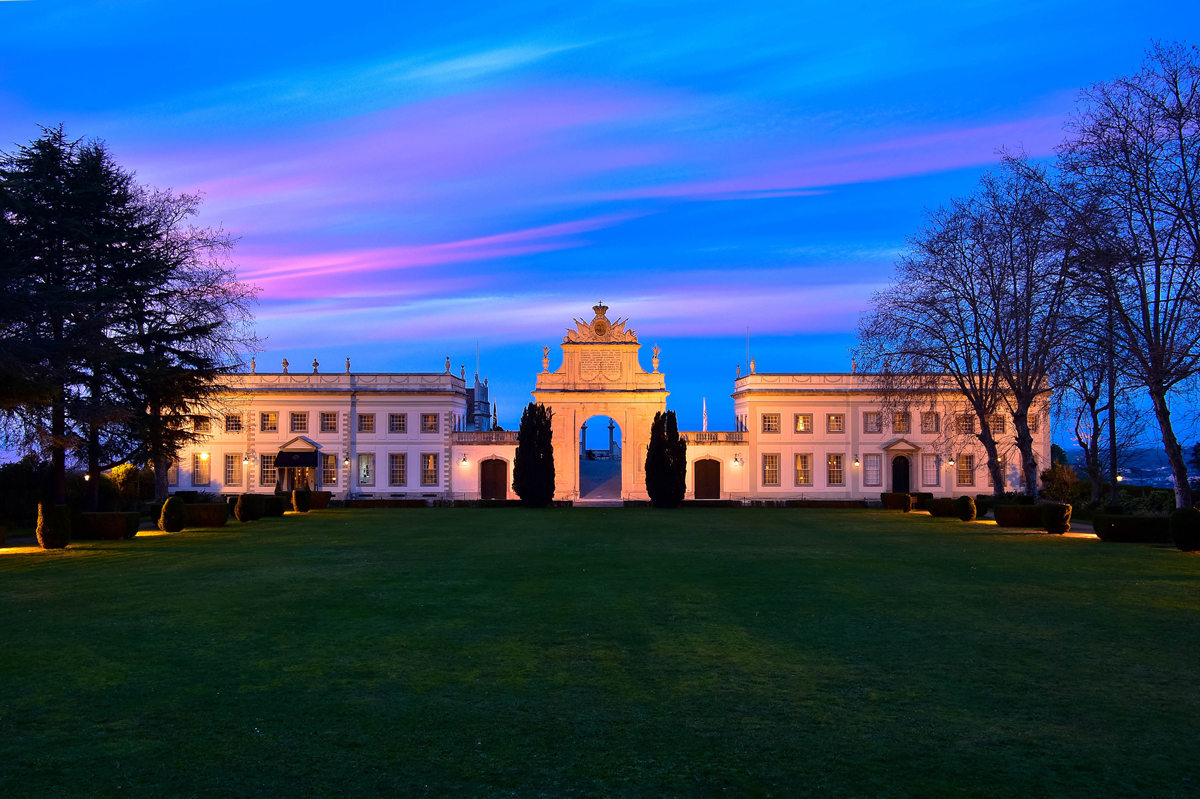 “Welcome to the jewel of Porto”. This is how we are greeted in this historic hotel’s official page. It could be redundant to point it out, but the truth is that Hotel Infante Sagres, which celebrates its 70th anniversary this year, is indeed one of the treasures of the invicta. Founded in 1951, it reopened in 2018 after extensive renovations, to bring out its architectural and cultural heritage. Located in downtown Porto, this is the place to stay in a visit to the city: the rooms and suites are a mix of sophistication and elegance, as per the space’s long tradition, where there have stayed kings, heads of state and world renowned musicians. From the hotel, you can quickly get to the most notable tourist attractions, like bookstore Lello, the basements of Vinho do Porto, and Vogue Café Porto, which now serves brunch every day. More information at www.infantesagres.com. 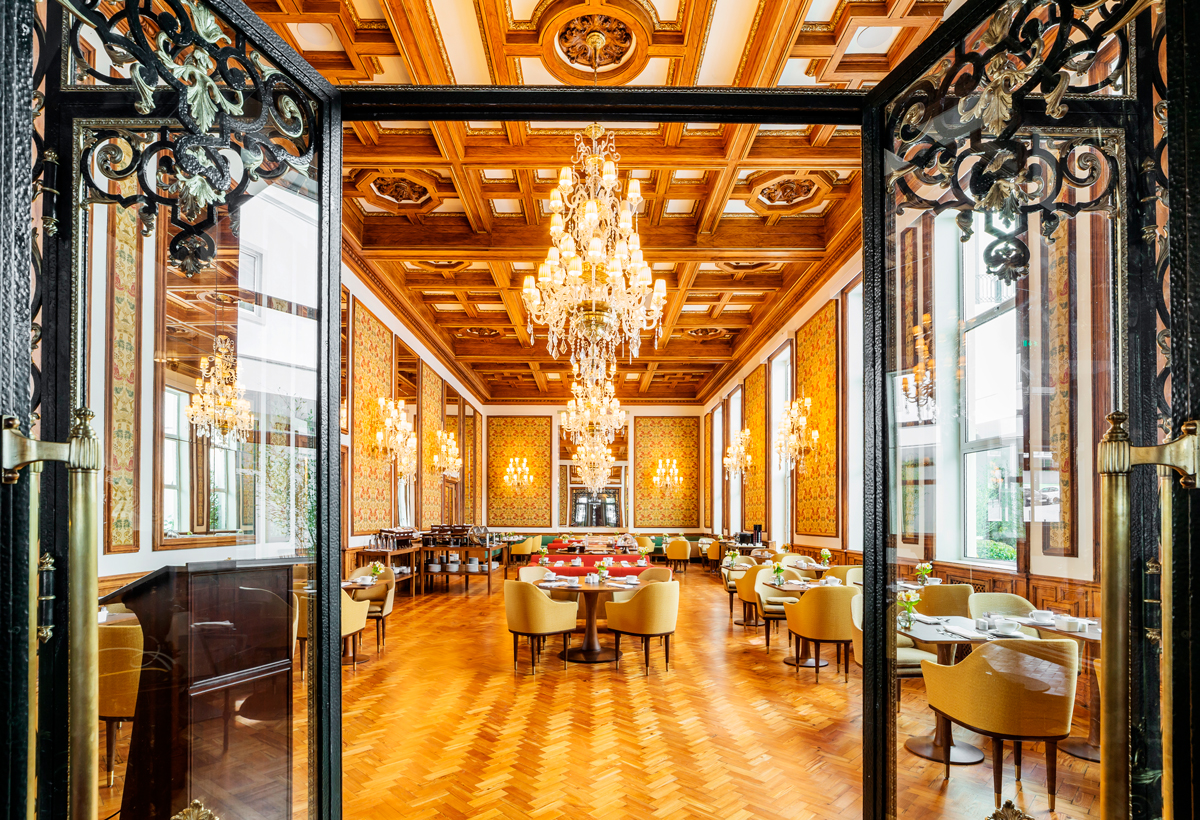 Translated from the original on Vogue Portugal's The Nonsense Issue, from july/august 2021.