English Version | I love fashion but it’s everything I hate

Catherine Deneuve and an Australopithecus with a bone on their head come into a bar. In between six double martinis and twenty cigarettes, they talk a little about rock art, jogging on the beach, laundry machines, surfer boys, Depeche Mode, lice, garbage cans, yacht vacations and good weed. Ah, and about fashion. 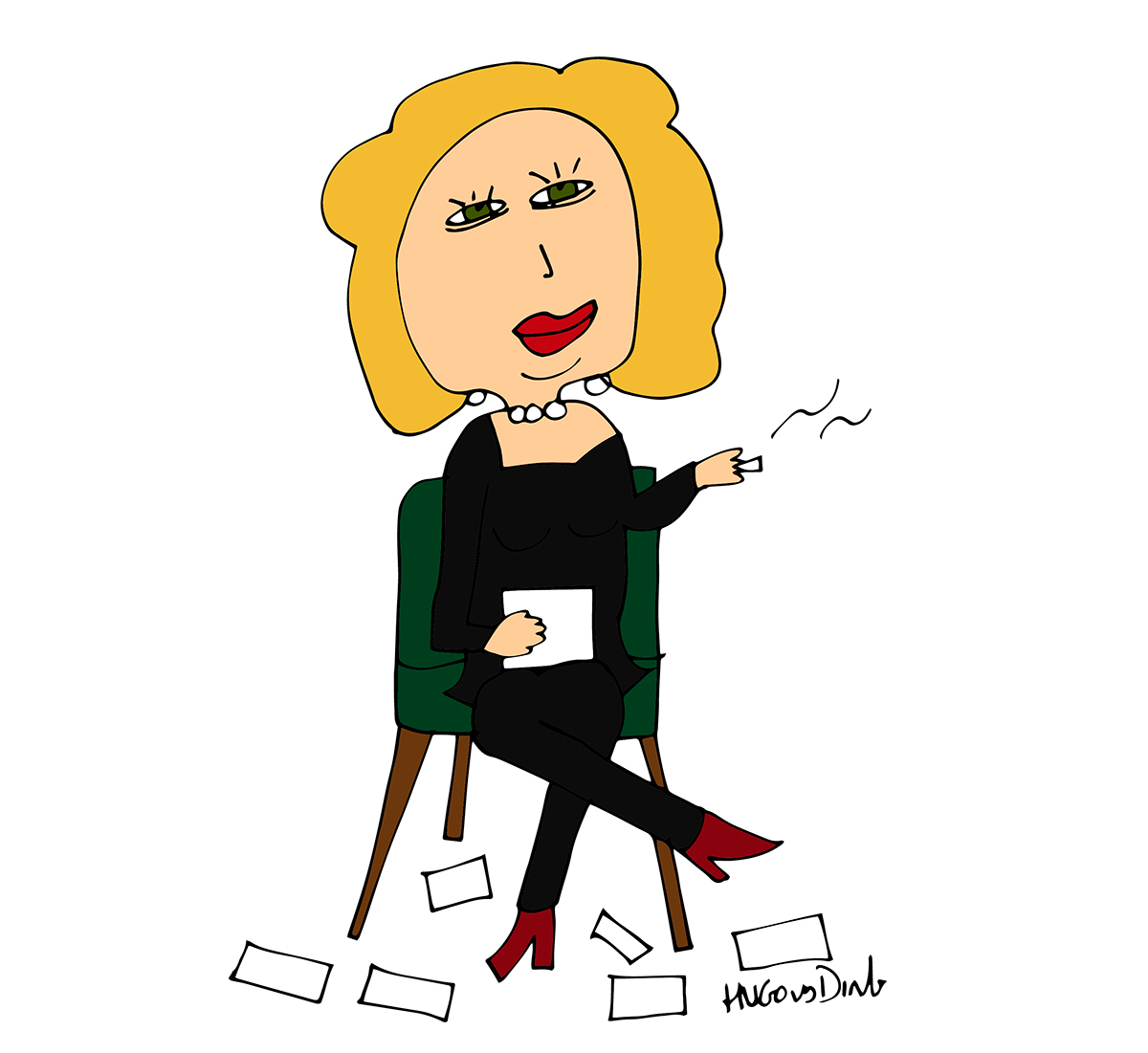 In 2016, the French journalist Loïc Prigent published a book called J’adore la mode mais c’est tout ce que je deteste. Or, in English, “I love fashion but it’s everything I hate”. It is a compilation of some of the best insults, slander and absurd phrases that he has heard throughout the (many) years he has spent backstage of what pitifully we call the “fashion world”. And Loïc knows its insides better than anyone: he writes regularly about the subject for French Vogue and Vanity Fair. And for Numéro and Madame Figaro as well, which are already French in themselves. And has even written for the mythical Dépèche Mode, considered the most avant-garde of all fashion magazines, and that inspired the name of the famous English band. At least according to Wikipedia, for I had never heard of this magazine before. But we can’t always be aware of everything, right? In my defense, I must say that Dépèche Mode was published between 1976 and 2001, precisely during the twenty-five years that I had either just been born or would only read Tintin and Asterix books or was too drugged in Amsterdam to even open a magazine. I know who Depeche Mode are, which is not bad. They sing that one track, Enjoy the Silence.

Let’s get back to Loïc. For someone to write about fashion for the crème de la crème of magazines of the kind, he still somehow finds time to be a movie and advertorial director. And I imagine that – naturally – on top of speaking French he must also play the piano and violin, has a thing for water coloring, knows a lot about gardening, dog breeds and wine casts. I imagine him waking up every day to go run with his dogs on the beach and put two loads of laundry to dry. By ten o’clock he would have had read two books and five newspapers, eaten fruits coming from four different continents, reorganized his socks drawer, this time not by color but by the initial letter of the city where he bought them from. A day filled with runs to the office will office, cultural activities and psychological support visits to many friends. At the end of the day, he will still find time and energy to organize and cook a dinner of five courses and six desserts for twenty intimate guests. Anyways, I love Loïc Prigent, but it’s everything I hate.

It’s worth losing fifteen minutes of your life to see Deneuve read a few cards she then throws behind her back with a look of boredom on her face. I think she only laughs once during the thing. She didn’t laugh, for example, with: “We don’t have a garbage can at the atelier. We couldn’t find one that was pretty enough. And having an ugly garbage can is the beginning of the end.” Nor does she laugh with: “I can’t travel because I accidentally threw my passport away. I thought it was an old invite to a Louis Vuitton show.” Not even with my favorite one of the bunch which, I confess, I’ve referenced multiple times: “The World is filled with problems and we must try to fix them one by one. Let’s start with this one: what is this you are wearing?” Deneuve’s tone is always somewhat tedious with a touch of futility mixed with the ridicule of what she is reading. The futility and ridicule of the “world of fashion”. The fact that she is one of the biggest fashion icons of our time only makes it funnier.

But it remains fascinating how fashion – mankind’s most ancient form of expression – continues, more than a hundred thousand years later, covered by a patina of futility when it is not completely swamped with ridicule. The number is not my own, but of the geneticist Mark Stoneking, from the institute Max Planck, from Leipzig, in Germany, that discovered traces of clothing used by humans on the DNA of lice that were that old. This immediately arose a question in me: if I could only choose between being friends with Loïc Prigent, who writes about fashion for Vogue, or with Mark Stoneking, who studies the DNA of a hundred thousand years-old lice, who would I pick? The answer, inevitably, says more about me than it does about them. But between vacationing in a yacht or good weed, I don’t think twice. One day I will find someone who has both a yacht and good weed.

Speaking of good weed, Stoneking’s lice tell us that, many millenniums before the first rock paintings on the walls of a cavern, a few Australopithecus were already showing some skin. Mixing zebra prints with leopard. Wearing a gazelle’s leg on one ear and a crow feather on the other. Going to a party with a monkey’s head where all you can fit is lipstick and a credit card. Placing a bigger bone on their hair to attend the Mammut races. Recycling a lemur dress from twenty moons ago with a few ostrich feathers. Men would also already be resorting to the classics, from a full bear and striped hyena, and those more savanna wear, with their ass almost all showing and a lion’s tame turned backward. It is possible that it was on the plain fields of Africa that homo sapiens (or a woman sapiens), tired of seeing the men in his tribe covered with dull, monotonous jackal leather and the monochromatic suffragist air of women’s panther skins, decided to create the first fashion collection in History. The first collection showing more noble materials, elephant or rhino skins, also possible to be worn in Prêt-à-Porter. Or that a prairie dog can also be Haute Couture. That a man can also take risks with a giraffe cape tied in the back or with the transparency of a python.

It’s possible that people laughed at that homo or woman sapiens. It that they were stoned to death, as they like to do it during the Pleistocene. But surely, they stopped their giggles after witnessing the success of their Chez Cro-Magnon, the first-ever human label. And humanity soon divided itself into those who wore Cro-Magnon and those who thought the epitome of chic was not to have too many bloodstains on their clothing. Shortly after, quietly at night on a dark cavern, there were those who took it upon themselves to copy Cro-Magnon’s creations, but with slightly less refined materials, like sheep and whatnot. Things were going fine, and then Maison Neandertal was born. From the rivalry between these two pre-historical fashion giants, everything else that we now know as the “world of Fashion” was born. That race to reach something that always seems to slip away. And the fear of arriving at a gnu hunt and hearing: “Look at that! Musky-buffalo is soooooo last ice age.”

But why is it that fashion – despite all the social, cultural and even political revolutions it has caused – still remains so under a cliché lens? Why is it that even inconspicuous people such as Loïc Prigent or Catherine Deneuve point their finger at how ridiculous Fashion is? The answer, after I lit up, seems simple. And it goes beyond the clichés. Fashion is – and is not – within everyone’s reach. I’ll explain. No one is expecting us to have a renaissance painting on our dining room ceiling. But it’s everyone’s prerogative to think we could have been a little bit more original. Or less original. What we’re wearing and how we’re wearing it is our own personal card. No one would say: “Have you seen Teresa’s boyfriend? Jeez, he was reading Teixeira de Pascoaes!” But everyone has a great-aunt that looks down upon our distressed jeans. In the heat of the French revolution, we see Marie Antoinette’s dresses pointed out as the exponent of the court’s excess and the splendor of the palace she lived in. The Smart I drive doesn’t make me belong to any tribe. The same doesn’t go for the t-shirts I wear to look like a surfer (and to get laid with surfers). The movies we’ve never watched are not as part of our biography as the colors we would never wear. Fashionistas and people that say “I don’t care at all about those things” are giving Fashion precisely the same importance. Because “not caring about those things” is in itself a very powerful statement. All this seems rather obvious. But then why is there still this apparent pickle between those who are in and those who are out of it? And why is it that often it all seems laughable from not only the outside but, as Prigent and Deneuve demonstrate, from the inside?

Perhaps because it’s a fundamental part of fashion’s nature to make everybody feel like they’re on the outside of something. While, simultaneously, it opens the door to a place we should all belong to. A place that, as soon as you’re in it, it is gone. Somewhere else. How to not love it? And hate it? Some say that’s wrong, that fashion is not like that at all. That it is the greatest form of expression of our individuality. That it is not imposed. That fashion is not its creators, the runways, mannequins or publications. To these people, I respond: The world has is filled with problems and we must try to fix them one by one. Let’s start with this one: what is this you are wearing?