When we shared on social media the cover of the Freedom on Hold issue on March 30th, we knew it was going to become part of History. Because we knew it was telling a story. 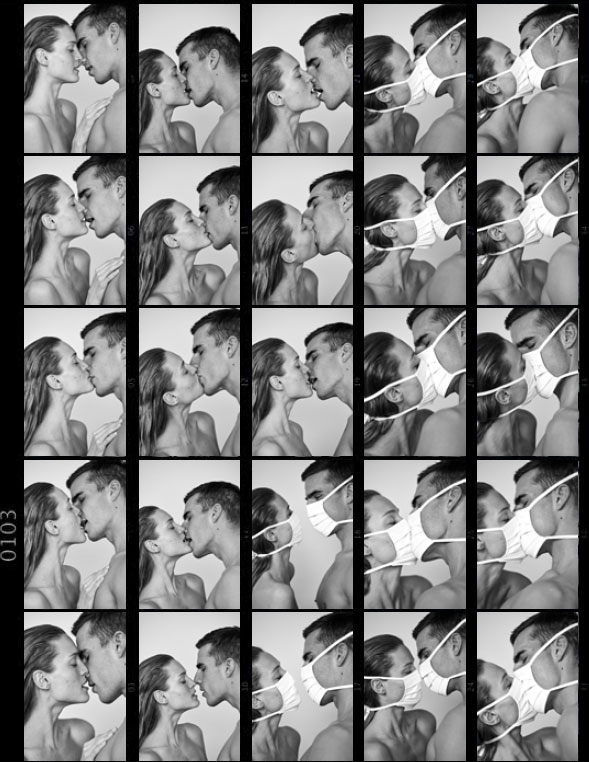 And we knew that it denounced a time that would always be remembered for its lightning arrival and unprecedented changes in our way of being, of living, of relating. Historical, therefore. When we launched the Freedom on Hold issue, published in April, we already called it historic because we knew it addressed a subject that would be reviewed and recalled by it and for generations to come, but we were far from imagining how historic it would also be in terms of impact in society, culture, press, way of communicating. That would put a new focus on the relevance of Fashion magazines and other of its kind, that would resonate an issue that everyone was feeling and few were discussing. We got stuck in the rise of infected people, but we forgot to notice that our own freedom, even if due to a greater good, was suspended. Suddenly, a picture was worth a thousand thoughts and an expression would mean a thousand words - Freedom on Hold: Fear will not stop us. And it didn't. This is the story of that cover for future times.

What’s something that was already historic before anything else?

Our Photography Director, Branislav Simoncik, photographs the cover in Bratislava, Slovakia. He asks the models Bibi Baltovic and Adam Bardy, a couple who already shared the same space in this quarantine, to join him with all the security and protection measures, as well as the required social distance. The goal? A single Image, the one on the cover of Vogue. A single image that needed more than 500 similar clicks for the winning frame to be selected, with masks made in cotton purposely by designer Lukas Kimlicka.

José Santana, responsible for the creative direction of the cover, and Sofia Lucas, director of Vogue, explore the more than 500 options, along with so many others from Renée Parkhurst with Lily Stewart editorial, and select the two covers that would later go on to the newsstands. They can't choose just one, and the team doesn't help, applauding equally the strength of both options. The result is unavoidable: the April issue will have two covers, agreeing that both are a sign of the times, but that they also send a message of hope.

The magazine goes to the printer, in a decision made close to the deadline just in time for it to be out in the beginning of the new month. With the final work done remotely, discussed between messages, e-mails, zooms and quarantined calls, an issue never required such a connection, namely a digital one.

The magazine reaches Vogue's e-shop and, a couple of days later, it hits newsstands - the few that remain open. The impact exceeds all expectations, with the option of downloading the free PDF to reach thousands immediately, while sales continue incessantly, with many of the readers who downloaded the (free) digital version not dismissing the physical object, the touch of the paper, which is seen, read and displayed.

The number of “likes” in the cover post on Instagram continues to rise and remains so, even days after the cover-reveal. It would reach, without difficulty, and with no signs of slowing down, more than 108,000 likes, which continue to count and rise. With a reach of over half a million audience, it didn't take long to sharpen the readers' creativity. The more artistic ones shared illustrated interpretations or interventions on the cover; others, demonstrated love in times of confinement, recreating it as couples.

The national and international press is not indifferent to the impact of the image and coverage of the launch is almost instant, with renowned publications multiplying words and praising its success. “These Vogue coronavirus covers may well be the most iconic ever,” reads Forbes.com; “The April issue [of Vogue Portugal] with a special cover‘ Fear will not stop us ’evokes a sense of positivism and human connection,” adds The Guardian; “A public health crisis that changed society reflected in two covers by Vogue Portugal that will go down in history”, confirms La Vanguardia; and Público ends with “It's the only possible kiss in times of covid-19. The title: Freedom on hold. In the month that Portugal should celebrate it, freedom is suspended. And the mask is the symbol of that.”. Words to which are added articles from publications such as The New York Times and mentions from MoMA - Museum of Modern Art.

A week after the launch and the orders in the Vogue e-shop do not cease to arrive from everywhere: starting with Portugal and with a special demand from our Spanish brothers, there are issues traveling to France, Italy, Sweden, Germany, United Kingdom, Australia, and the United States of America, Colombia, Qatar, Montenegro... to name just a few.

The ‘Kiss’ cover is out of stock on Vogue’s online store. The last issue goes to Granada, Spain, while the national newsstands feel the demand: they ask for reinforcement of the magazines, since they are unable to meet the demand.

Vogue decides to print full-size posters of the ‘kiss’ cover and adds a special pack in the online store: the issue with Lily Stewart illuminated by a ray of light can now be purchased with this emblematic image of Bibi and Adam kissing with a mask - really asking to be framed.

The last copy of this Lily Stewart + poster pack is purchased - it is Brazil that grabs the last issue of a Freedom on Hold issue that is completely sold out. Requests for a reissue now echo more strongly.

That is why, on this day, a reprint of Freedom on Hold covers arrives at Vogue.pt/shop in such a limited number that the cost of production requires a much higher selling price to the public. The issue, available for € 50, runs out in 4 days. Sales of the pack with the 2nd cover + poster also available for € 50 soar, in an eager search for the guarantee of keeping this emblematic image, even in a poster version.

The cost of an issue

Have you ever felt butterflies in your belly from buying a magazine that had that image that caused you such emotion that you got chicken skin? And when you got home, did you take that photo for social media, immortalizing the immaculate object, before holding it with imaginary gloves and leafing it carefully so that it didn't lose its display value? When we sell a magazine, the price you pay for it does not even cover the paper on which it is printed. Sales of the paper press survive not only from its success on newsstands, but from foreign investment. One feeds the other, but making a magazine with quality may not always mean profitability. When you pick up that magazine that gives you a shiver of happiness, know where every euro of your love and applause goes. 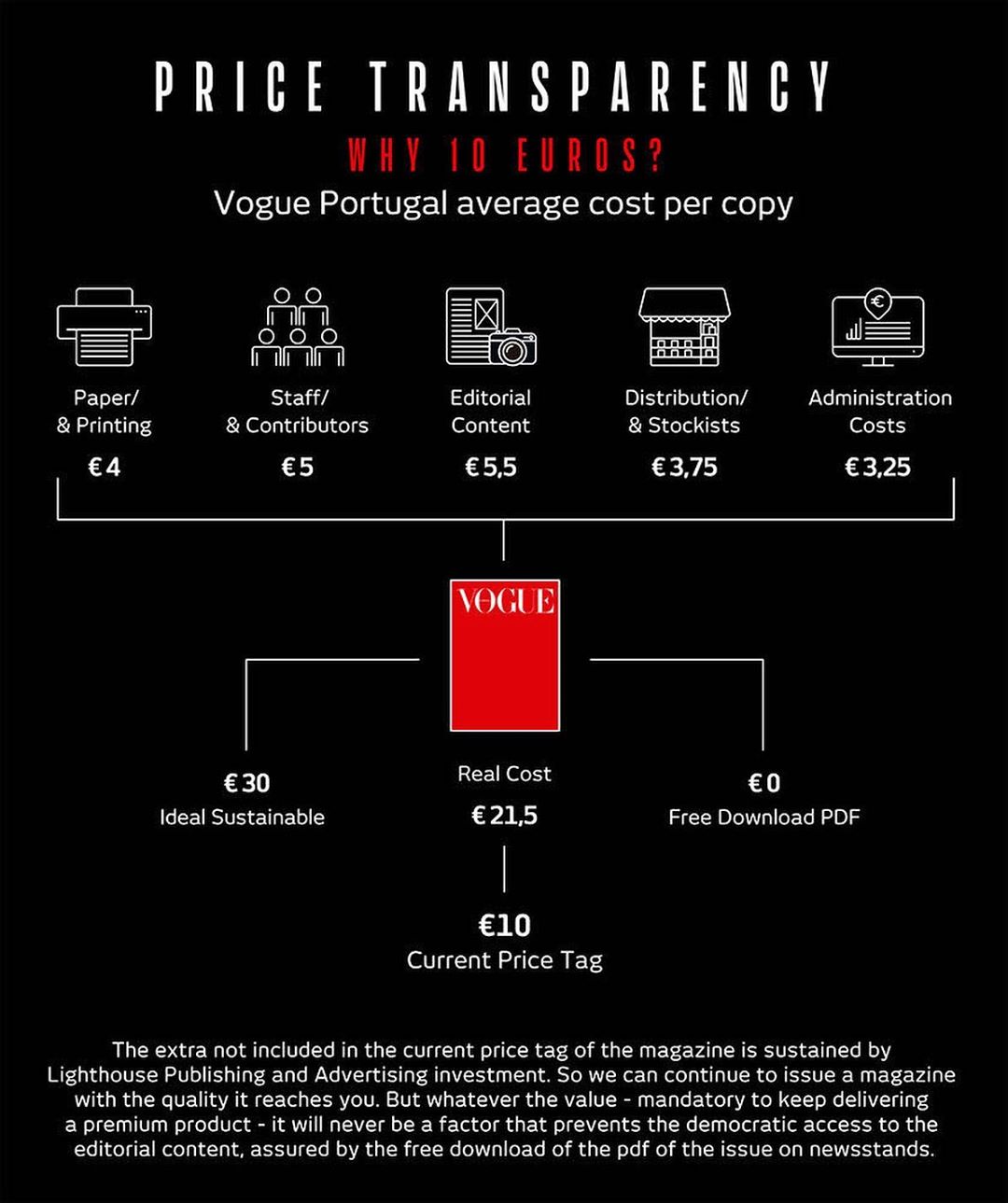