English Version | Thoughts in a thread

Something that, in an issue of no comments, translates into the weave of thoughtfulness that goes into creating the most environmentally friendly knits, yarn and fabrics that have a a smaller carbon footprint, maintaining a comfort that doesn't deplete the planet's natural resources. When the topic is sustainability, there's no need to say much to feel the difference: you just feel the lightness in using materials that don't weigh on the body nor the conscience. Like this selection of fibers and fabrics that are born from the waste of raw materials so unusual in clothing such as apples or algae or pineapples. 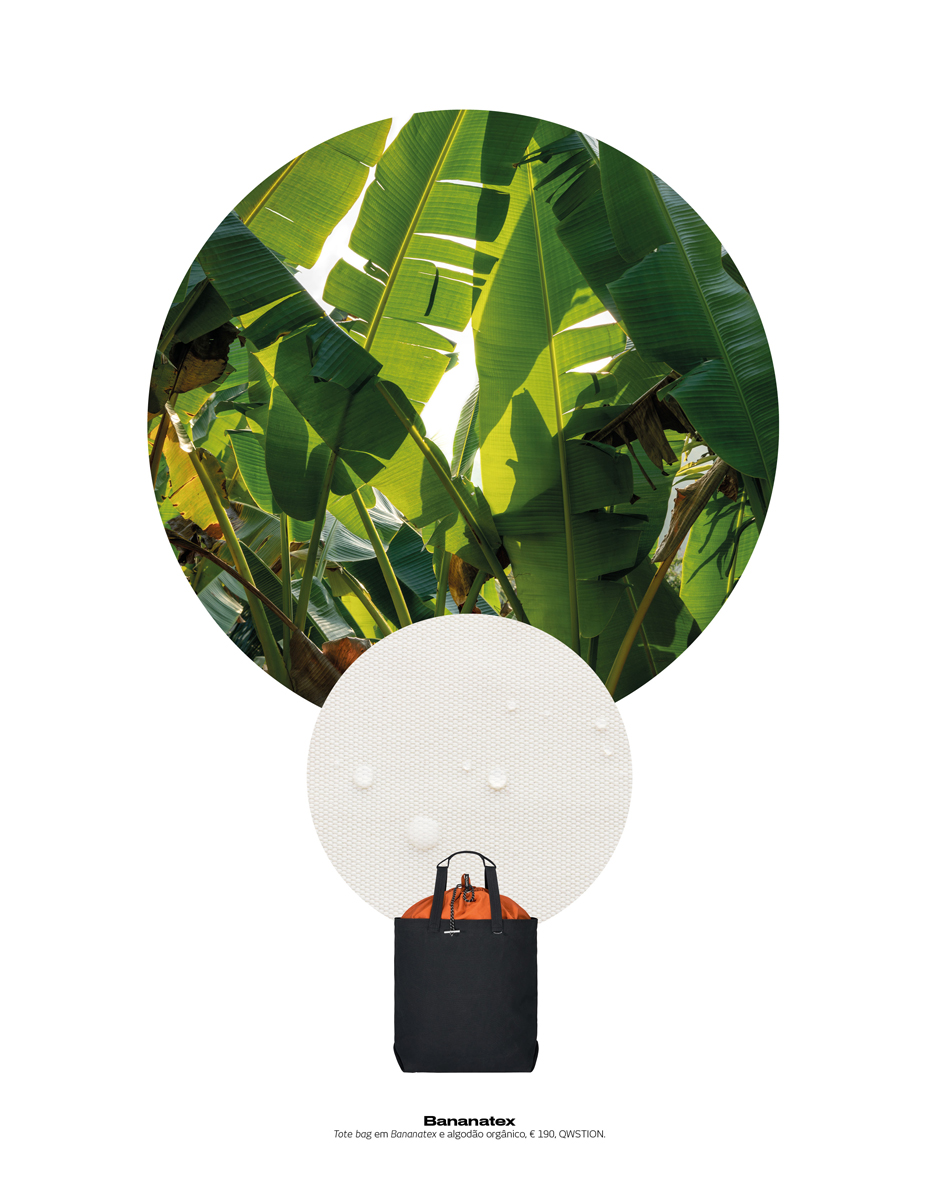 The name says it all: derived from the fibers of the banana plant, a species of banana tree called Abaca, the fabric is a kind of durable and malleable fabric that responds to the demands of environmental, economic and social sustainability awareness, since, in addition to being a natural and biodegradable alternative to synthetic counterparts (which incorporate plastic), it's grown in a sustainable forest ecosystem that does not require additional water and chemical treatments, also contributing to the reforestation of areas devastated by mass plantations and increasing the prosperity of the local workforce. The process involves thinning the leaves of the Abaca plant (which then fertilizes the soil) and separating the outer layer of the trunk/stem to use its primary fibers (the interior contains secondary fibers and the pulp of the plant). The fibers are then “combed” to separate them and are allowed to air dry before being divided by shade (the lighter ones are rarer and therefore more expensive). The development of the material was thought of by Swiss company QWSTION, founded in 2008 to launch itself in the research of renewable materials in order to replace synthetic textiles (and which ended up including this discovery in a variety of its own products). In addition to all the aforementioned advantages, the company wanted to meet usability criteria, that is, aimed to becoming even more pleasurable to wear than, for example, cotton, while at the same time reducing its ecological footprint, by comparison. Available in a variety of colors, Bananatex can also be waterproofed with a layer of beeswax. 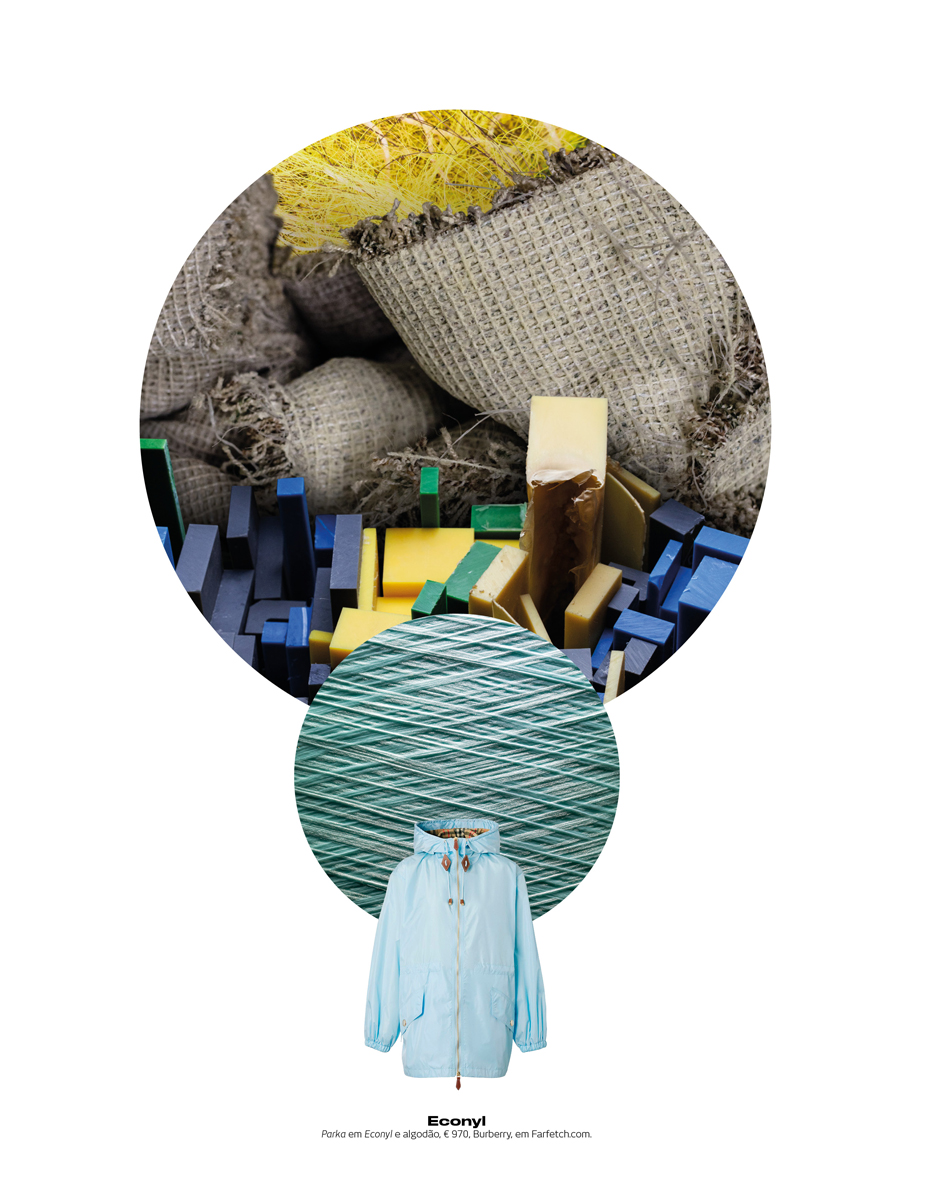 It's ecological and, yes, it's nylon, but above all it's the closing of the circle in full swing: Econyl is nothing more than regenerated nylon, created from the waste of this same fiber (but not only). Infinitely recyclable, the new fiber comes from nylon waste previously used and discarded in different products, such as carpets, fishing nets, fabric scraps, industrial plastic... Its transformation begins with the recovery of the aforementioned materials that would otherwise be just environmental pollution, then radically regenerated and purified to its original essence - which means that this nylon is the same as its fossil counterpart, only its source is more sustainable. The result is transformed into fibers and polymers to feed the different textile industries so that they can then generate new products (which close the circle of waste) for consumption. The company responsible for developing the registered fiber is Aquafil, specializing in synthetic fibers - with its eyes set on sustainability. 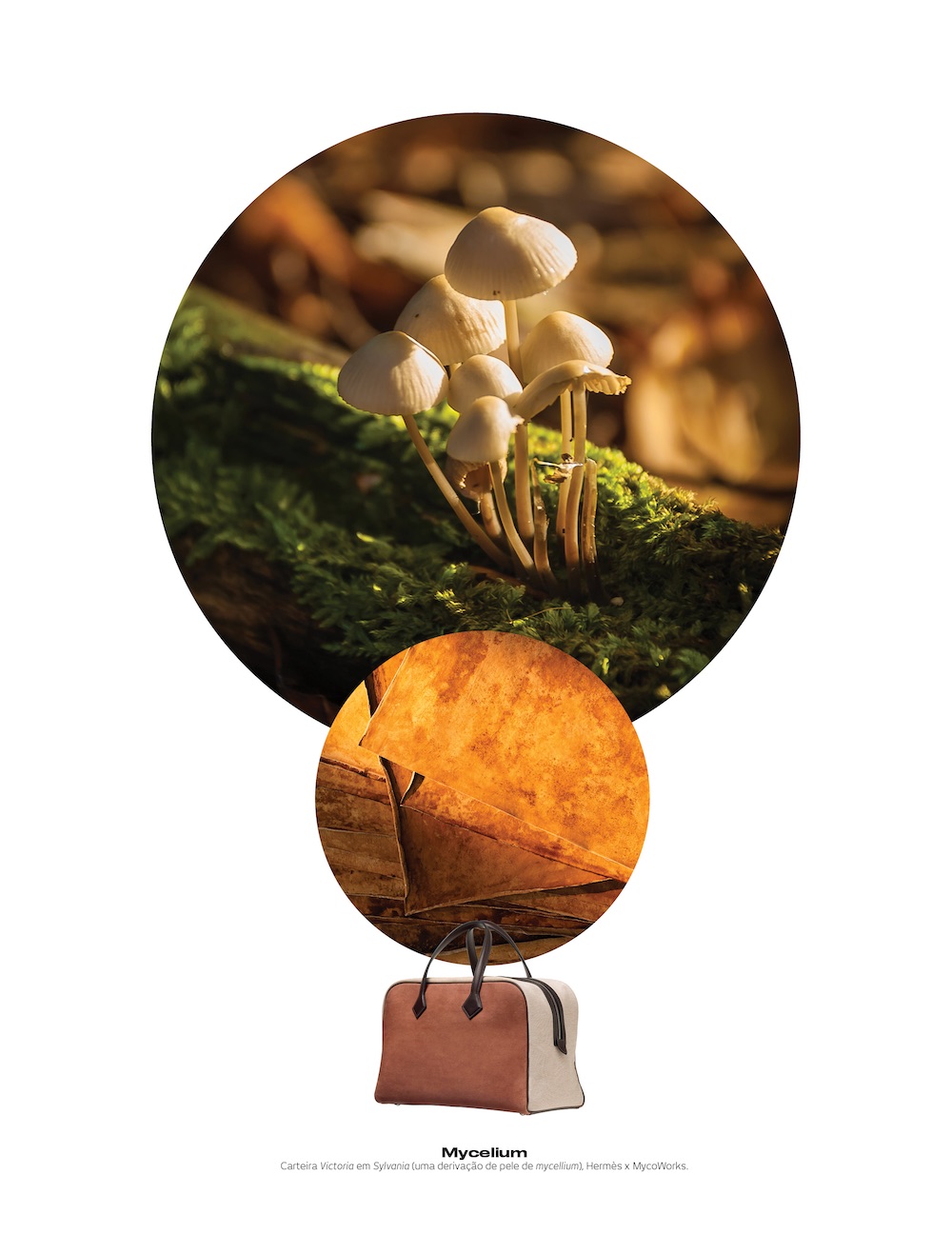 “They grow like mushrooms” is a phrase meaning abundance, so it was bound to happen that someone would create a textile from these fungi - or rather, the net that connects them underground. Someone - or some company - like MycoWorks, a company that takes advantage of this network of mushroom roots, aka mycelium, to create a material similar to leather, but with a much lower impact on the environment. This vegetative part of the fungus - responsible for carrying nutrients between species and also for symbiosis processes between them - is nothing more than a branching mass formed by a set of entangled cells and it is from here that this thick mat can be treated to becomesomething resembling leather. The process has a small carbon footprint because, using the root and not the mushroom itself, it can be carried out virtually anywhere using very little resources: it doesn't require light, plus it converts waste and stores carbon by accumulation in the growing fungus. Furthermore, even though the manufacturing process can be time consuming, it will be much shorter than the livestock's growth span. Already with applications and development in some parts of everyday life, the material still has a way to go until it reaches shops massively, but the prospect of achieving a competitive price tag, as well as the ability to compete in durability and appearance with its animal counterpart, makes it a textile to keep an eye on. 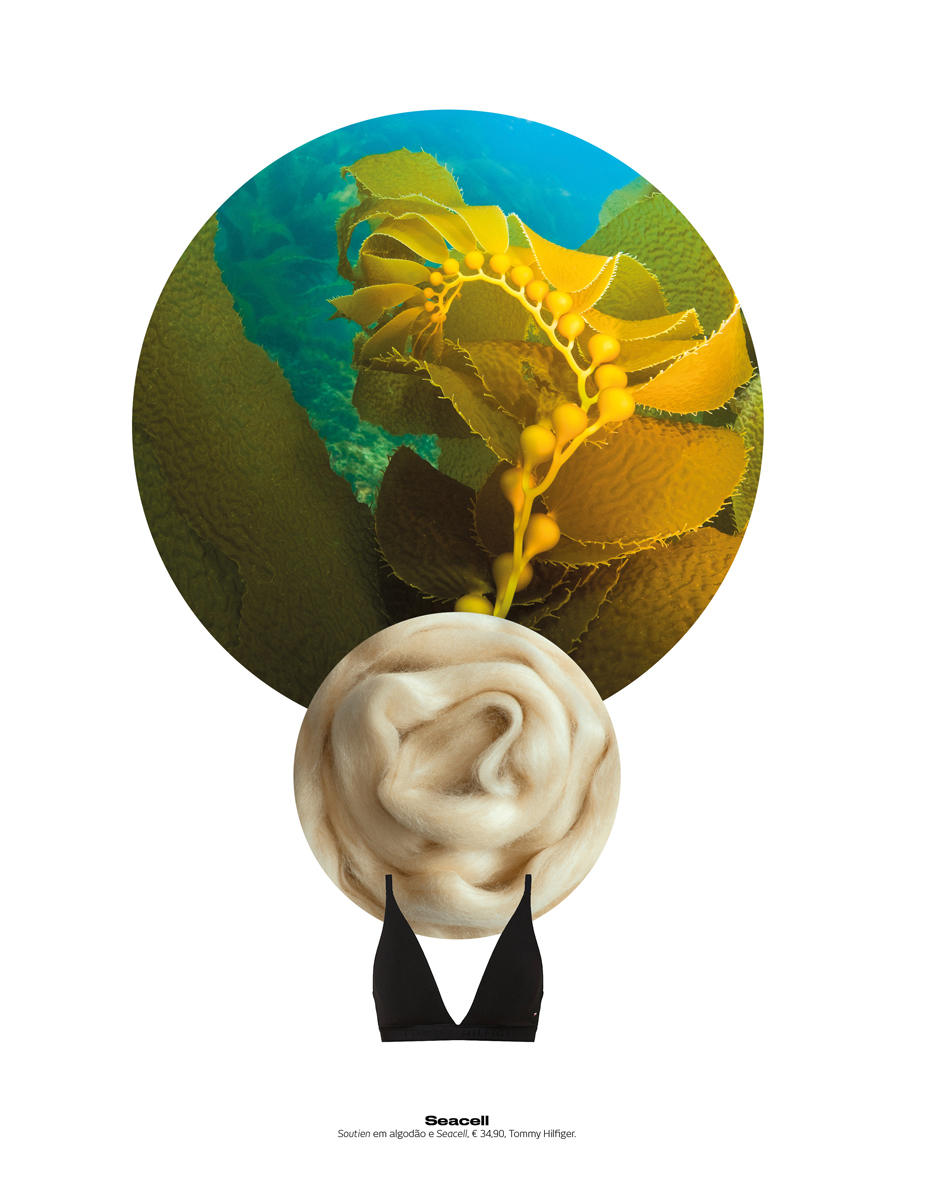 Seaweed is its main element and this sustainable fiber is probablu going to sink in your best wardrobe. Already used in several products (maybe you had no idea, but you can even already have something at home with a percentage of Seacell in its composition), the ecological material - which meets all the practices for such certification in its production process - is composed of seaweed derivatives in a yarn then blended with other components, such as cotton, to create the final textile. This cellulose fiber is manufactured by mixing Lyocell (created from wood pulp) with seaweed extracts and two results can be achieved: a SeaCell Pure version, which does not interfere with the effects and properties of algae, and an Active otion, when fiber is associated with silver - it is said that the fabric has medicinal properties (and that it remains even after washing), such as protecting the skin and releasing active principles that are beneficial for cell renewal and skincare, and that silver is added to it to reinforce the antimicrobial action in a mesh that is soft and flexible, in addition to being light, therefore very popular for children's wear, sportswear (its porous structure is particularly appealing because it facilitates the absorption and release of moisture to the outside), and even underwear. 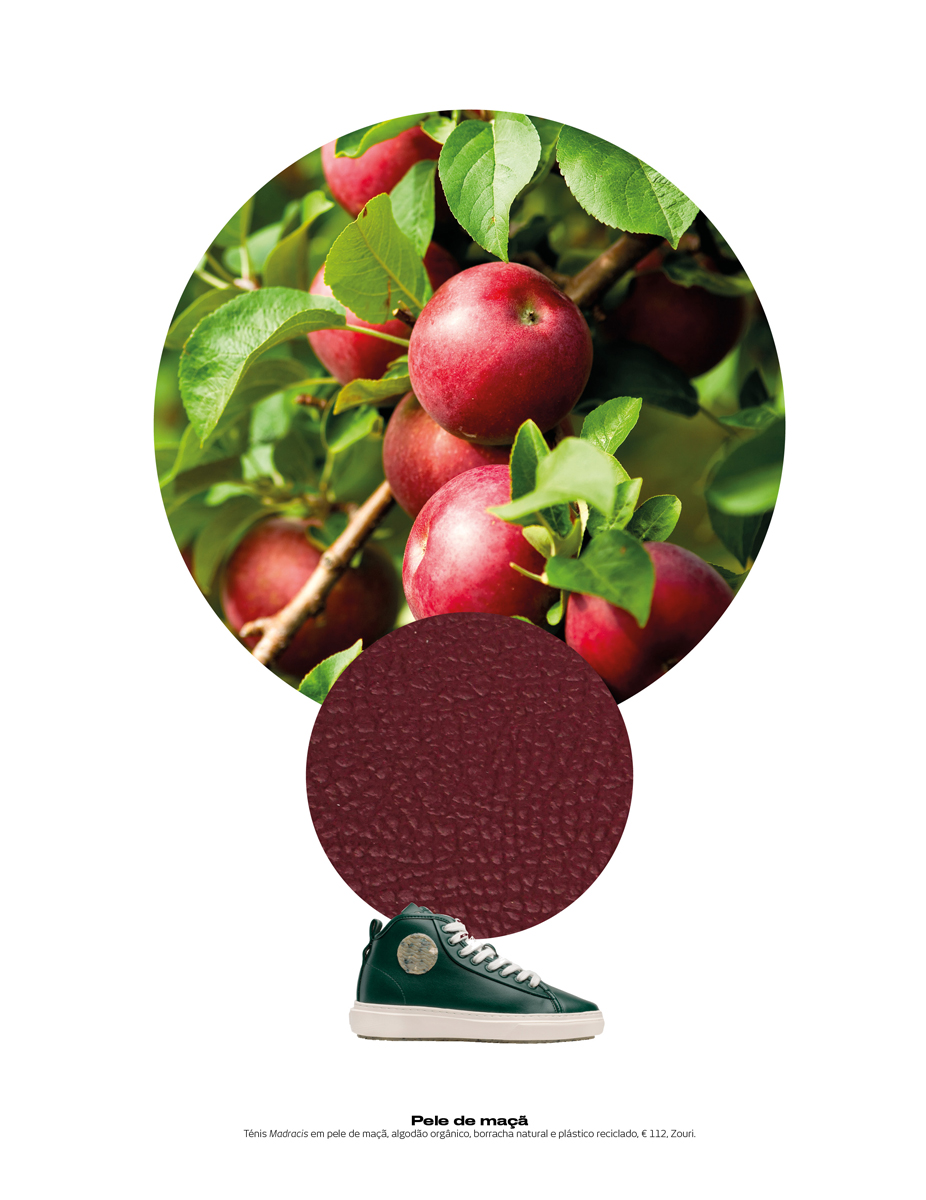 AppleLeather, the brand founded by the Scays Group, is the label responsible for this apple-derived fabric, an alternative to synthetic leather that allows for a variety of textures, while eliminating plastic (and weight on your conscience): by reusing waste from industrial processing of apples for consumption, this option means recycling residue that would otherwise be garbage, while at the same time reducing emissions and energy consumption in production and replacing the need to produce from scratch. How? By reusing the skin, stem and apple fibers discarded by factories - then dehydrated, pulverized and mixed with a biodegradable plastic made from milk protein - meaning that, in this reuse, pesticides and water waste are disregarded. According to the final purpose - shoes, wallets, clothes, furniture… -, the density and thickness of the material is then decided. Different types of apple leather fit in different ways to different consumables, so one kind of this “leather” might be better for footwear, for example, than another. 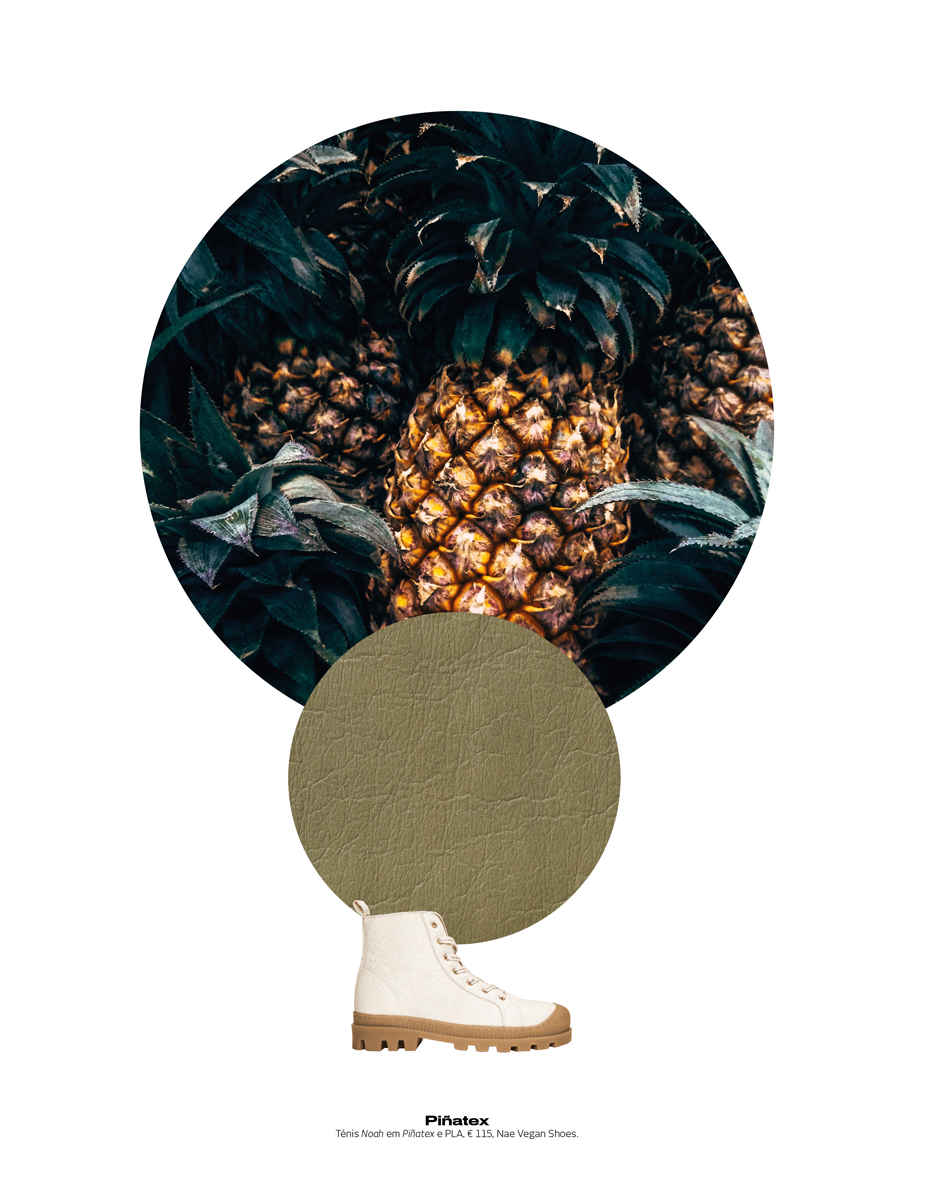 If you like piña colada... you will love piñatex, this textile material made from pineapple - admit it, you were already guessing that the pineapple was behind this. This vegetable leather reuses a by-product of the fruit's harvest - that is, the waste of its cultivation - to transform it into a less impactful alternative for the environment than the animal counterpart. It is from the stem and leaves that the fiber is extracted, through a process called debarking, carried out by the farming communities that the project supports. According to Spanish designer Carmen Hijosa - the name behind the discovery, as well as founder and Chief Creative and Innovation Officer of Ananas Anam, the company that developed and registered the fiber - this leather-like specimen can be treated and dyed to create different textures, thus multiplying the application possibilities to different areas - from Fashion to Lifestyle -, while reducing its environmental impact (in addition to recycling waste, employing local workers and using fewer resources on the planet), all without compromising the quality of the final fabric. 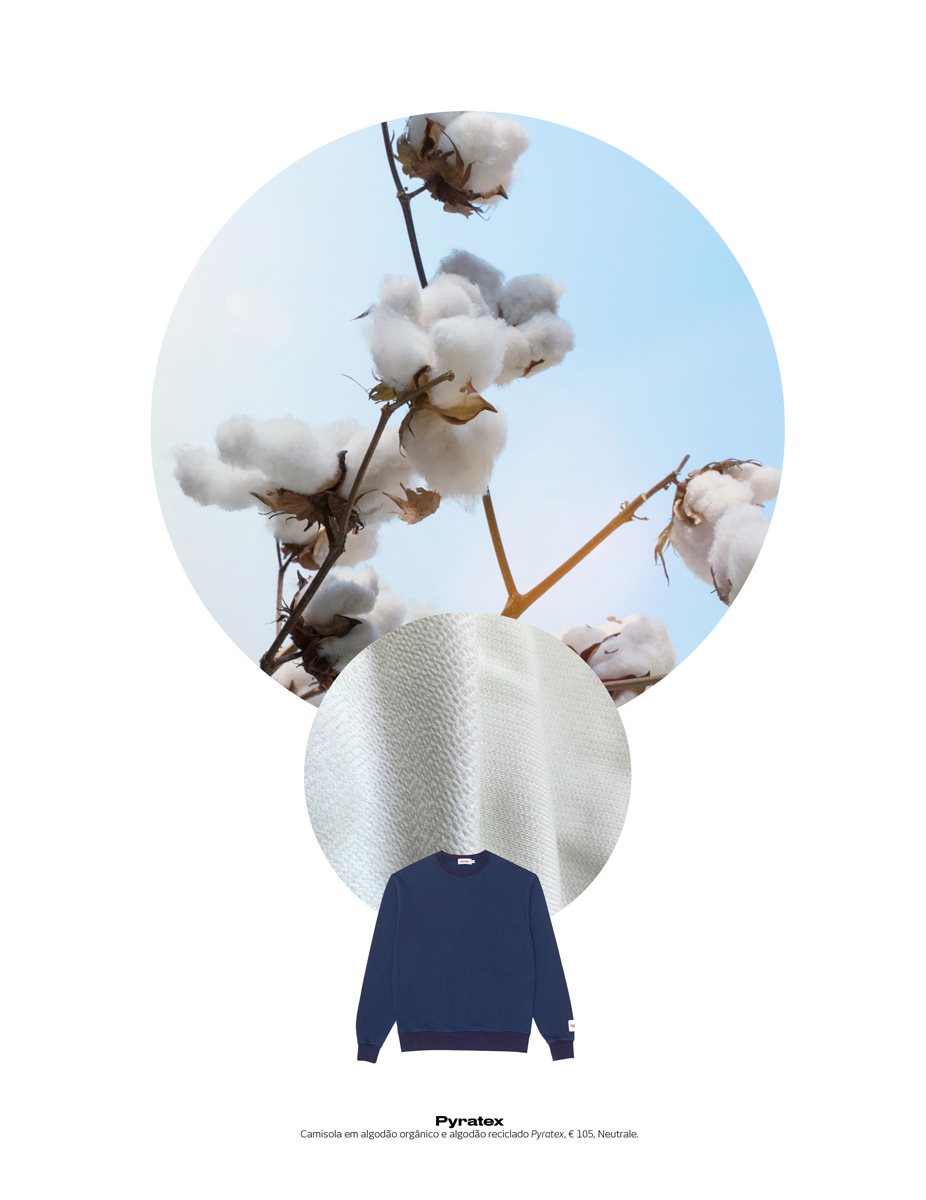 A word that is synonymous with a multiplicity of fibers and origins: what's important to know is that it's created from a plant source that is then transformed, through a patented production process, into a more environmentally friendly fiber - and which may even have different skin-friendly properties such as warmth retention and UV protection. Depending on the origin, the final product acquires the properties of the biological resource that serves as its genesis to reach the market with different characteristics - for example, if bamboo is its raw material, the final textile, in addition to comfort, will enjoy thermo-regulating, anti-perspirant and anti-bacterial properties. From algae and nettle to the reuse of cotton and agricultural waste, Pyratex, more than the fiber, is the process by which environmentally friendly knits are created, with application even in the cosmetics area.

Originally published in the No Comments issue of Vogue Portugal, from November 2021. Full credits and story on the print version.