Can shopping take you over to the point of driving you “crazy”? Know that there is a disturbance of the psyche that justifies this feeling. Vogue investigated with the seriousness that the subject deserves. 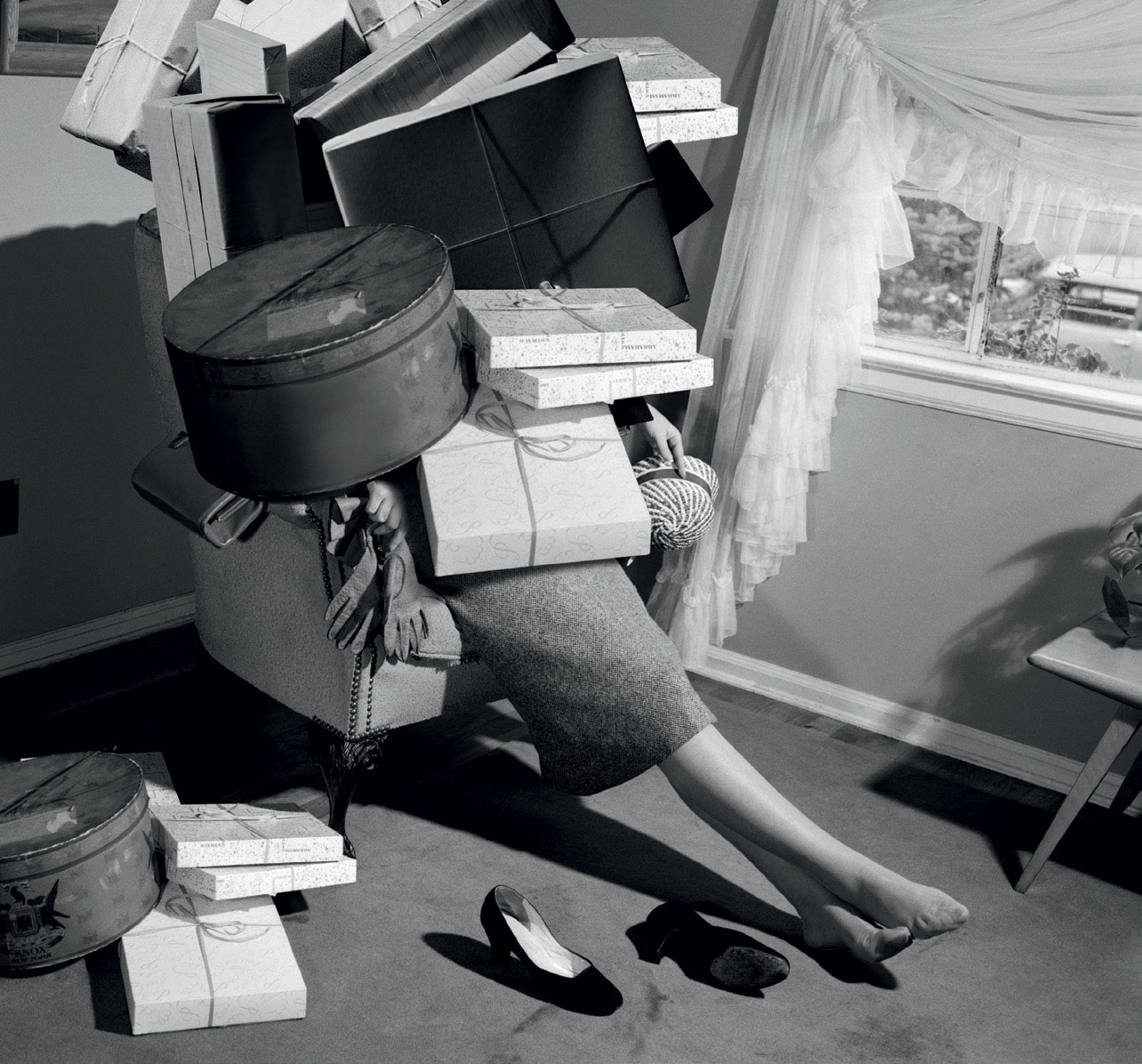 Crazy: “who has an absurd, excessive behavior, contrary to common sense or what is considered reasonable; uncontrolled." in Priberam Dictionary of the Portuguese Language. Why do women play the role of shopaholics? Living in a consumer society, it is reasonable that the individual, regardless of gender, easily succumbs to the desire to buy. In the absence of a unifying religion in society, purchasing has been sacred since the second half of the last century, and as a symbolic social act, it now assumes an almost vital importance for the individual. It is not the need for the object itself, but rather of performing the act. The compulsion for the transaction. Personal fulfillment through this gesture. It has been noted that the need to consume, even during the pandemic, has spurred online sales in a way never seen before. In the midst of concern about wages and unemployment and considering the possibility that workers at the front line become infected by the simple egocentric fact that we want a new shirt (even more so to stay at home), justifying this type of “need” has become rather difficult. The word "essential" has been used so much since the beginning of this situation that buying another dress triggers a dialogue of conscience more or less along these lines: "Is this essential now?" And obviously the answer is always no.

Fashion, according to Gilles Lipovetsky, a philosopher who analyzes it as a historical trend and its long-term effects, is no longer limited to clothes or music. It infiltrated the world of production. Smartphones, automobiles, tourism, or even food products, obey a logic of fashion nowadays. That is, of accelerated and perpetual renewal, of change. In other words, Fashion is today at the heart of consumer capitalism. It is not something peripheral, but something central that transforms our ways of life and consumption. The monotonous is boring so it is necessary to constantly change, produce new and consequently buy new. By renewing the aesthetics of objects, companies stimulate people's desires, the desire to change - to buy. Fashion is everything that brings us a desire to own or a desire to want to live. The question that then arises is to whether or not objects are central in the pursuit of happiness. We live in a society where advertising seems to tell us that our happiness depends on the trip we are going to take, the house we are going to buy, the next car we are going to have, the dress that reflects the latest trend... Objects provide us little moments of happiness. The moment we buy it, we may feel that there is a concern that goes away. There is, for all intents and purposes, a relationship between consumption and satisfaction.  But the illusion lies in the belief that it is in permanent purchase that we fulfill our lives. Objects take on such a proportion in society that the idea of ​​their deprivation makes it impossible for us to live. It is not the simple possession of objects that brings us happiness, but the opposite, that is, the impossibility of acquiring a certain object that can make us unhappy. Capitalism then developed, according to Lipovetsky, what we can call "markets of sensitivity." We see that today's economy is no longer just an economy of useful products, but an economy of sensations. It is evident that the individual is not reduced to a mere consumer, but consumption continues to gain increasing importance in our life - which becomes more and more materialistic, affecting more and more our behavior. “It is true that taking care of ourselves is fundamental in the relationship we establish with ourselves and with others. At certain times, it can be positive to go to the hairdresser, have a massage or buy a piece of clothing”, notes Prof. Dr. Ana Paula Amaral, specialist in clinical and health psychology and cognitive-behavioral psychotherapist. And she adds: “However, self-care is related to our ability to take care of ourselves, in relation to our physical and mental well-being and does not depend, exclusively, on the purchases we make. There are many ways to invest in self-image, some healthy, others less healthy. There are people who go shopping every day and continue to have low self-image and low self-esteem. There are people who only go shopping when they need something specific and have a good self-image and high self-esteem. The perception we have of ourselves and the esteem we have for ourselves depend more on intrinsic than extrinsic factors, such as ‘going shopping’. There are people who never feel good or beautiful, regardless of the clothes they wear!”

When we think of the term shopaholic, it is likely that the image of Isla Fisher performing the character Rebeca in Confessions of a Shopaholic or even a colleague whose desk is always full of boxes will come to mind. One thing is certain, for those who suffer from this behavioral disorder, the reality is much less attractive than the Hollywood version played by Fisher. The so-called shopaholics actually suffer from oniomania or inability to buy moderately. The disorder was first described in 1924 by the German psychiatrist Emil Kraepelin, whom the first clinical reference to shopping maniacs is attributed. In a first approach, this behavior can be seen as a harmless routine, however, it is a disorder that the person cannot deal with alone. Although it may seem like a more trivial addiction, when compared to drugs or alcohol, Ana Paula Amaral emphasizes the importance of seeking specialized help: “In the event that excessive purchases are associated with anxious and / or depressive conditions, it is essential to seek help, as it is essential to treat the associated disorder. Finally, when it comes to compulsive behavior, it is very important that the person seeks specialized professional help, as it is a situation that they cannot sort out on their own. In this situation, the person is not able to control his behavior, buying more than he can or needs and despite the act of compulsive buying momentarily relieving anxiety, it also causes emotional suffering (for example, guilt and shame) and interferes with social and occupational functioning, often resulting in financial problems.”

Usually the purchase serves to mask a negative emotion caused by frustration, it works as a shot of pleasure or “compensation for a feeling of ‘emptiness’ that we can’t fill. Often due to excessive dependence on the opinion of others and low self-esteem, coupled with the ease with which 'one buys and throws away', in the consumer society in which we live", says the specialist. People who suffer from this behavioral disorder go shopping alone, ashamed of their impulsiveness and lie about the amounts spent, hiding the bags to avoid judgments. They are often concerned with shopping in general and devote a significant amount of time to this habit. Many report a sense of urgency, euphoria or anxiety, which can only be lightened at the time of purchase - which causes an intense, almost sexual arousal. What drives the compulsive buyer is not the item purchased, but the act itself. According to the researcher interviewed by Vogue, “when we buy something that satisfies a need, something that we have long wanted (for us or for others), it is normal to feel pleasure with the purchase. When buying is compulsory, like other compulsions (for example, food), it is followed by shame and/or guilt.” The guilt can be so overwhelming that they feel the need to buy again. Living in a world like ours, where shopping is part of life, it is difficult not to feed the addiction - when every day offers a new stimulus in the form of adding more objects to the cart (whether physical or digital). A brief reflection is enough to conclude that, throughout the year, there is not a single pause when it comes to external encouragement for the act of buying - whether for Valentine's Day, father, mother, mid-season promotions, sales, Black Friday, Christmas, Easter, and so on. Brands have invested a lot of money in monitoring our consumption habits, in order to make the act of buying as simple as possible. Whereas before we would have to get inside several stores to find the perfect dress or jacket, in the ideal color and within our budget, brands (especially fast fashion) are now trying to remove any mental effort from the purchase process - which only worsens the situation of people suffering from oniomania.

Is it normal to enjoy buying something? Yes. Buying something you like releases endorphins, which cause a feeling of well-being, just like eating a food you love or having sex. It is important to distinguish excessive behavior from that which occurs within the standards considered normal. The large, but episodic, expenses that occur on special occasions do not necessarily configure this diagnosis, especially if they are not associated with worry or anguish. “Buying without necessity is not healthy, but it may not be pathological, it depends on several factors, among which we highlight the frequency with which this behavior occurs and the resulting disability. In other words, if it is a specific situation that does not bring personal or financial damage to the individual, it is not healthy, but it is not considered pathological”, says Ana Paula Amaral. Money is a feminist issue - and yet women are still reluctant to talk about it. In the patriarchal society in which we live, women are programmed to be more concerned with all purchases in general: for the home or not. Sometimes it is also women who purchase their husband’s and children clothes (until long after they have gained their own financial independence). Enjoying shopping with their mother or friends is transmitted from an early age, transforming consumption into a social event.

It is estimated that this condition of oniomania affects about 6% of the population, with the majority of studies effectively pointing out that 90% of this sample are women. Some researchers associate these results with lower levels of serotonin. Research on brain activity at Utah Valley University in the United States points to a link between serotonin and compulsive behavior. As a neurotransmitter based on amino acids, serotonin helps to relay impulses between neurons in the brain. Low levels of serotonin have been associated with several disorders with regard to impulse control, and treatment with drugs that increase serotonin levels appears to alleviate these disorders in many patients. In addition to these factors, Ana Paula Amaral says that "there are some psychopathological conditions in which the prevalence is higher in females, and this difference may be related to biological and/or socio-environmental factors".

According to the website Psychology Today, women are more susceptible than men to mental health problems, especially anxiety or depression disorders. This may be the result of factors such as genetic vulnerability, the types of traumas that women experience and the way they deal with them and differences in brain processing. Although ‘shopaholic’ and ‘retail therapy’ are very common terms and used casually, in some cases they can trivialize a serious addiction. In fact, one of the most prevalent, if dubious, forms of self-care is precisely the so-called ‘retail therapy’. But the whole treat yourself narrative is designed to convince consumers to buy things they probably don't need or can't afford, all in the name of society's obsession with taking care of ourselves. The message seems to be: buy it so that your pain will disappear. Healthy? Probably not. After all, it is true that capitalism can create or worsen society's most complex problems, but it also promises to solve them - in exchange for a small amount of money, of course.