From misinformation to cancel culture, from the expectations of a post to the pressure of likes, social media has become a place where crazy comes knocking on every door. We’re on the verge of a nervous breakdown – but it’s still possible to find wellness in the midst of insanity. 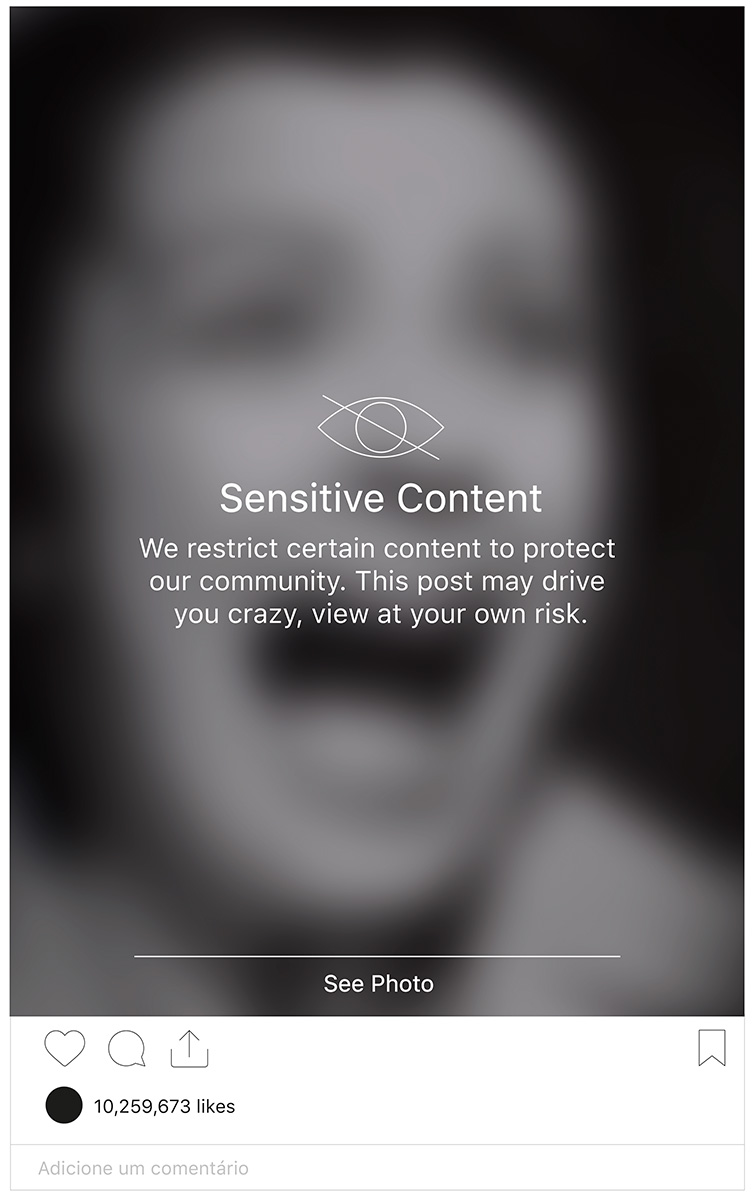 "This is the never-ending story of the good and the bad of social media. It's discussion we can’t seem to stop having."

This is the never-ending story of the good and the bad of social media. It's the discussion we can’t seem to stop having. It's the realization that the worst (that is, everything that affects our mental health) is nothing but a small price to pay for the best (that is, having access to social media). But the question remains: isn’t it “crazy” to stay in a place that defies our sanity? “Amidst the millions of social media users is a sizable chunk well-acquainted with what I’ll call ‘post-post anxiety.’ It’s a dreadful malady, really; with symptoms that come on after you’ve fired off a tweet or pic that is, on second-thought, offensive or unflattering. Once this anxiety has taken hold, even your most haphazardly created content can feel like a stand-alone representation of you. Others may see it that way, too, for social media does not favor nuance, forgiveness, or any sort of holistic picture of its users.” The words belong to Collier Meyerson and were published in the Wired in March. In the article, titled “Is This the End of Oversharing?”, the journalist summarized how the Internet has been shaped by this new anxiety of posting – and revealing – too much. “Peak post-post anxiety occurs in the first moments after the post goes public: It can be paralyzing or, for some, downright nauseating. (…) We could just write it off as another unlikely and unfortunate hazard of the internet. But the condition extends far beyond pedestrian gaffes or bad photos.” This anxiety, as Meyerson puts it, made the Internet wise up – and “while the impulse to share may not have gone away, it has been tempered by consequences”, giving way to protective measures offered by social media companies and an outlet of wellness culture. “Gwyneth Paltrow’s Goop outlines how to do a ‘digital detox’ on its website. ‘Social media made me angry and anxious, and even the digital spaces I once found soothing (group texts, podcasts, YouTube k-holes) weren’t helping,’ wrote New York Times tech reporter Kevin Roose in an essay describing how he ditched his phone and "unbroke" his brain. Even the architects of social media have joined the movement to abandon it for the sake of self-improvement: In 2018 one of Instagram’s original 13 employees, Bailey Richardson, famously quit the app altogether, citing her need to separate from ‘a drug that doesn’t get us high anymore.’”

This feeling that social media is a construct where “crazy” can happen doesn’t stop there. As Eva Wiseman wrote for British Vogue, more precisely in a reflection piece on how to block the noise and find inner piece, “the internet is more than just a place we visit in order to while away a dead morning; it is a crying baby, calling us the second we turn away. And now? God, the cries. The cries!” This idea of “noise” summarizes one of the biggest examples of “insanity” on social media, and one of the hardest to control – the either naïve or malicious spread of false information. “A few months ago, I got angry about something on Twitter. Somebody had tweeted a photo of a paper sign in an apartment building, informing tenants that using the elevator would soon cost $35 a month. It was surprising, but on a gut level, exactly the kind of behavior I’d expect from a greedy landlord – the kind of thing that’s easy to furiously retweet without thinking.” The moment was described by Adi Robertson, senior reporter of The Verge, in an article titled “How to fight lies, tricks, and chaos online”, published on the website on December 2019. All it took was a little research on the topic to realize that the photo had been published on Reddit in 2013, with the author of the post affirming that the notice was quickly removed; the building manager denied having any responsibility on the matter, suggesting that it could have been a prank or a plan that was rapidly dismissed. “Retweeting the photo would have just outraged people about something that had seemingly never happened,” the senior reporter continued. “This kind of viral half-truth is part of the fabric of today’s internet, and the kind of anger it inspired has been turned into a dangerous commodity. It’s cynically exploited by businesses for ad-supported ‘fake news,’ by scammers raising money online, and by authoritarian governments to spread hate and fear.” Even so, as Adi said, the intention was not to blame those who fell for it. “A lot of the problems are exacerbated by companies, governments, and other factors that individuals can’t control. (...) It’s worth slowing down and carefully navigating their traps — to avoid spreading an alarming false rumor, getting angry at a group of people for something they didn’t do, or perpetuating an honest misunderstanding.”

"The internet is more than just a place we visit in order to while away a dead morning; it is a crying baby, calling us the second we turn away. And now? God, the cries. The cries!"

We don’t need to go back 100 years to find signs of this. First came the US elections that put the expression “fake news” on the map of social media – while misinformation and its spread was not exactly new, the digital environment where it prospered, with all its algorithms, publicity systems, trolls and bots, made it more difficult (impossible, almost) to control. Then, the new coronavirus. “First, there were conspiratorial whispers on social media that the coronavirus had been cooked up in a secret government lab in China. Then there were bogus medicines: gels, liquids and powders that immunized against the virus,” the New York Times reported on the increase of misinformation about COVID-19 circulating on Facebook and Twitter. Despite efforts from social media companies, who were identifying and removing false information from its platforms, untrue reports kept spreading like wildfires. The situation was so overwhelming that the WHO named it as an “infodemic” back in February; two months after, the European Commission reported that 2,700 articled with “fake news” related to the new coronavirus were identified on social media daily. More recently, with the death of George Floyd and the global protests demanding the end of racisms, racial injustice and police brutality, the Black Lives Matter movement was hit by the damaging effects of misinformation, namely because of those who were sharing false or misleading information, videos or images to attacks the protesters and turn the public against them.

For every post on Instagram that is identified as false information (a relatively recent feature of the app to reduce the spread of such contents), there is a beam of light at the end of the tunnel – a feeling that, even in a comment section dominated by bots, social media can still function as a platform for public service, a tool to fight for what we believe in, a loudspeaker to amplify our voices and those of others. The only problem is that we don’t seem to reach an understanding on what all this mean – in other words, the “craziness” of others is seen as the “sanity” of others. While some condemn the ease with which an opinion can be repressed, others defend their right to do so. While some read a remark as a bully behavior, other write that there are no more plausible excuses. While some ask for less judgment and more tolerance, others say that the time for that has come and gone. While some implore that 2020 becomes the year when cancel culture gets cancelled for good, others see the cancelled label as the bare minimum. In GQ Australia, more precisely in the article “Have We Taken Cancel Culture Too Far in 2020?”, Jess Campbell left us with the question: “With our lives increasingly played out online, the line between the personal and the political is growing ever more blurry. Mainstream internet activism now seems to involve calling out, blaming and shaming, but what room do we leave for people to be forgiven? And what if we leave it too late?”

"We need to stop cancelling people for their mistakes. Not allowing people to grow from their mistakes is unfair, and not helpful. We were all learning at one point. Give people a chance to grow."

Recently, artist and activist Dom Roberts posted an image on Instagram where the words “cancel cancel culture” could be read. Leaving the disclaimer that the post was not applied to rapists or murderers and defending that people should be held accountable for their actions and crimes, Roberts’ reflection focused on those who were trying or wanted to be antiracist allies, but who were not being given the space to grow. “We need to stop cancelling people for their mistakes. Not allowing people to grow from their mistakes is unfair, and not helpful. We were all learning at one point. Give people a chance to grow.” The sentiment was echoed when Lindsay Peoples Wagner and Sandrine Charles announced the Black in Fashion Council, a group created with the intention of representing and making sure that Black people can advance in the Fashion and Beauty industries. “We want to allow people to rise to the occasion of changing,” Peoples Wagner told Business of Fashion, declaring that the approach of the group is to move beyond “cancel culture” to “accountability culture”. We will hardly find harmony on social media. What some see as “crazy” will remain what others see as the opposite. What some define as “hysteria” or “exaggeration” will remain what others believe to be a legitimate reaction. What some see as a confrontation, a passing of judgment without thinking twice, a meaningless pointing the finger, will remain what others define as a right and a duty. When we connect in a space that is not palpable, it’s very easy to forget that we share with other human beings. We ignore the nuances, we silence the context, we block the emotions, we cancel humanity. We stop seeing what’s in front of us for what it really is – a filtered, tiny, version of who we are. When the scroll is said and done, that may be the big “crazy” of social media.