Could it be that without the help of a mirror as a tool to aid personal expression we would become static and boring creatures - in our eyes and those of others? 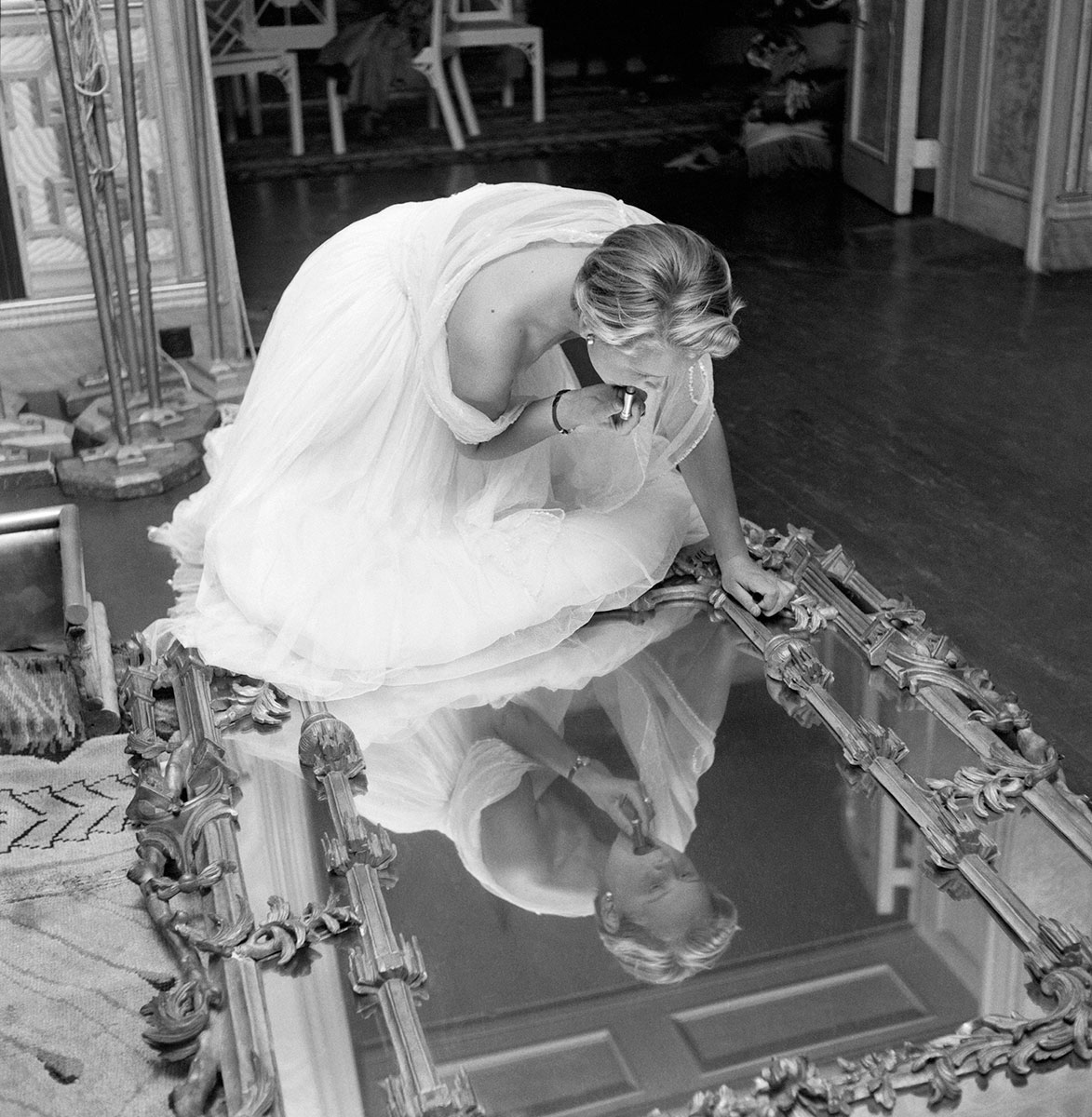 Dressing myself has always been the main vehicle for expressing my identity - mainly (but not only) due to the dialogue it unleashes between me and some (quite some) wide eyes of those who meet me. I am excited about dressing, especially when I know that I will be with someone who will understand what I am trying to say through that same act. Without that, laziness takes hold of me and the result is a pair of tracksuits and a sweatshirt. Everyone feels stimulated by (and fond of) the eyes of others, especially with regard to Fashion. But who is it that genuinely wants to know about what we wear? Probably no one. And yet, all of us, as individuals, want to know, and that's because we use the clothes we wear to communicate something about who we are and also as an armor to protect ourselves from what we think we are. When we wear something that we don't identify with, we feel unprotected, vulnerable, uncomfortable and dissociated from ourselves. It is deeply curious how style and the self characterization intersect, transforming the process of dressing in a powerful vehicle of creative expression. If you agree with the idea that Fashion is rightfully this vehicle of expression, it is easy to see it as something positive, as something that is able to give us courage, to make us feel good and whole. And this is where the paradigm lies. Because sometimes clothes don't look good, or we don't have the resources to buy them or the time to choose them ... and then what? When we turn the pleasure of a pleasant thing into a requirement to feel whole and in tune with ourselves, what happens when, for some reason, that pleasure is taken from us? Is a good outfit a tasteless quest for something bigger? If we dress for ourselves, why the need to see our reflection in a mirror before we leave the house? If Fashion is really that tool of self-expression why do we need to consider the opinions of others to get involved with it? We could simply dress on instinct, believing that all the pieces we wear look just as good in reality as they do in our imagination.

If we are proud of our external appearance, we move differently, aware of the possibility of being observed, aware of the way our body behaves inside a certain piece of clothing that signals a particular occasion. We do not lie, but we are still “acting” in a more natural way, because the look of other people alters our behavior, even if involuntarily. By maintaining, and exposing, that large reflective surface, the mirror - whether or not it being in a common area of ​​the house - is opening up the possibility of constant self-analysis. There are people who simply do not make room for this analysis by eliminating full-length mirrors or choosing not to purchase one for months when they move. The bewilderment in the reader's eyes allows us to guess the surprise: “But how can these people get dressed without a mirror?”, When in fact the question that forays the brain is: “But don't they care about what other people think?” Right. Choosing outfits without the help of a full-length mirror is more or less like needing Google Maps to get by in the street of your own home. We should know how to do it without the help of an app, since for years we have repeatedly stepped on the same square meters of sidewalk. But without that app, without that mirror, we feel lost. What shoes do we normally wear with that dress? What top could balance the fact that those pants are so tight? Does that t-shirt make me look relaxed-cool or relaxed-sloppy? On the other hand, when it comes to what others think of us, we are addicted to having something to say to them. We do it insistently and across all possible platforms. Clothing is no exception. We can put on some baggy pants and tell the world that we know that the silhouette is totally non-flattering and, despite that, we wear it anyway because we don't care what others think. We can wear pink from head to toe and tell the world that we have no intention of going unnoticed. We can dress in suits and ties in the case of women, or with a skirt in the case of men, and thereby tell the world that we have a very defined point of view on gender issues and we know how to express it. We like to think that it is just a body within a fabric, just a layer that does not need to carry implicit meanings. When a simple look in the mirror clears all the positive energy from our body as if we were inside a giant washing machine. What's worse: facing an exhaustive self-analysis and self-criticism at home, within four walls, with the help of a mirror, or later, in an involuntary encounter with a storefront? Or is this a binary that does not actually exist, that of assuming that self-criticism is constant and that it is impossible for it not to happen? Could it be that in the impossibility of verifying that something looks good on us, are we forced to imagine that it does, or are we convinced, on the contrary, that it does not?

In an article published in 2019 on the Repeller website, several people gave their testimonies of a life (or a period of time) without mirrors. For many, there was no need to have a mirror, because they knew exactly which clothes to match and, consequently, they did not need to check whether or not they looked good inside them. The mirror did not work like a cheat sheet, and the absence of it allowed them to save time in the morning - they did not suffer from indecision or were subject to scrutiny, they just planned an outfit inside their heads with which they were excited about and went out the door, full of confidence. Blessed the one who knows all his clothes and knows how they looks on them, since most of us ordinary mortals dress up as if we have never seen or experienced any of our clothes ever in our life. Is our reflection preventing us from maintaining a relationship of closeness and a deeper understanding of our wardrobe, deluding us with an idea of ​​creative expression? We can agree that our external aspect does not define us, but our intellect, generosity, character. And then, we stand in front of a mirror and scold ourselves for not being at our best, for not trying hard enough to wear a piece that we identify with or, worse than that, having the appearance of someone who we are not inside. How can we be aware that the gaze of others in relation to our reflection is a terrible base on which to build our self-esteem, and yet, insist on doing so? In the book Femininity And Domination (1990), by author Sandra Lee Bartky, she reflects on society's obsession with appearance: “The imperative not to neglect our appearance suggests that we can effectively neglect it, that it is within our reach improving our appearance - not just being neat and clean, but more beautiful and attractive. What is assumed is that we still don't look good enough in the eyes of others, that attention to common hygiene standards would be insufficient, that there is something wrong with us as we are. And therefore, not only must we continue to produce ourselves as beautiful bodies, but the bodies 'that we have in hand' are deficient from the start.”

How many hours have you spent criticizing your reflection? Throwing a dress on the ground because it no longer fits you as it did before? Rotating over and over between outfits until you get back to exactly the first one, one that causes you frustration at best and absolute indifference at worst? The mirror and what we choose to wear after having seen our reflection, allows us to assume a persona and, sometimes, frees us from reality itself (which can be a relief) and the absence of a reflection ends up silencing us, preventing us from playing that kind of game, playing a certain role in public. A mirror should not be a source of exhaustion. Instead, it should be a convenient object, a mood booster, a place of neutrality that allows us to enjoy any occasional pleasure. Away from any shame, obsession or superficiality. It is much easier to say that vanity is a distraction than to say that it can be one, but it need not be. We spent so much time between an interest in aesthetics and recognizing the exaggerated and damaging emphasis that aesthetics has on popular culture (and, historically, in our head), that we struggle to believe that the two mutually exclude each other. But perhaps they can coexist. We do not live in an invisible world, which means that characteristics related to appearance have meaning, and the way we present ourselves does to. We can choose to stay out of this narrative, as people who don't have a full-length mirror do, with admirable resourcefulness. But the opposite choice, if made carefully, does not have to be in moral contrast to that. Perhaps a look by another human being can be just a look. A little preamble to what comes next, if we are willing to pay due attention.

Translated from the original on Vogue Portugal's The Mirror issue, published january 2021.
Full credits and spread on the print issue.