English Version | The heritage of creativity

Daciano da Costa described Design as something "ephemeral and theatrical". But the work he left has nothing of ephemeral. His timelessness is too evident. And the proof that creativity can be a family product is in the Atelier Daciano da Costa. 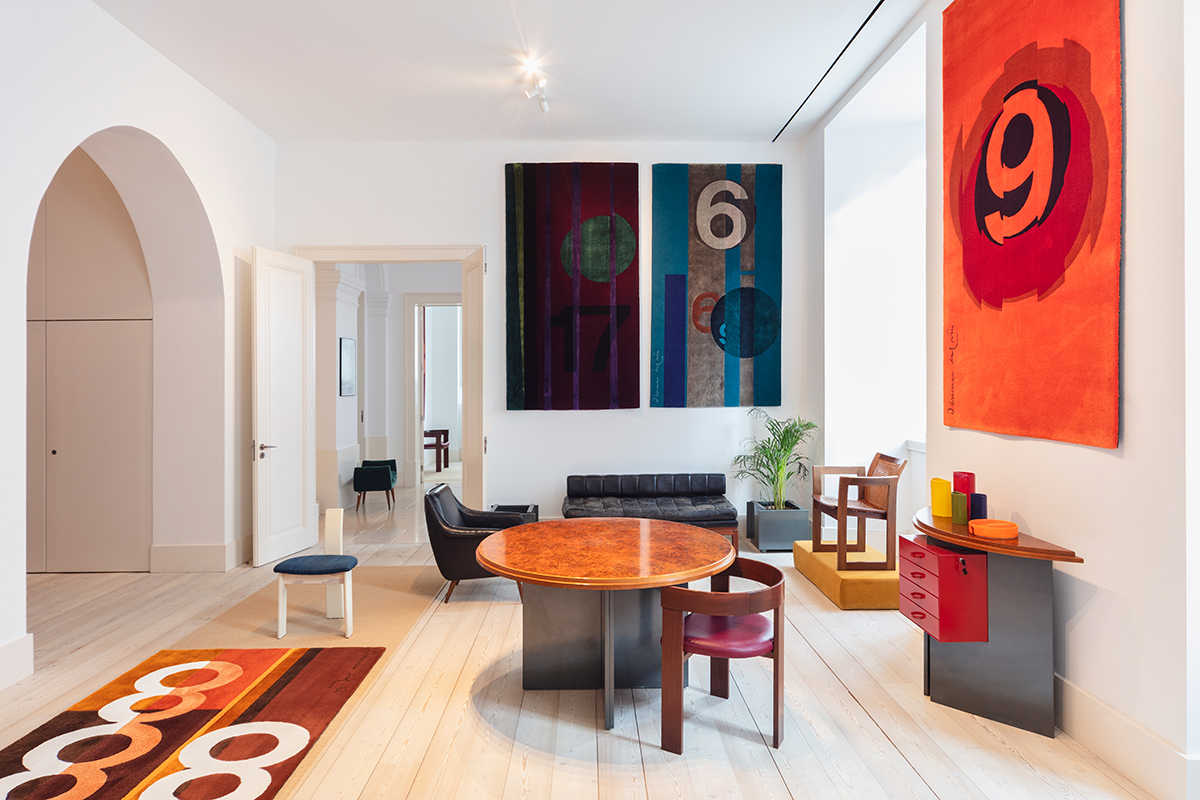 Gallery of the Daciano da Costa Studio in Lisbon

Daciano da Costa (1930-2005), "the father of Portuguese design", was also the father of five daughters. One of them, Inês Cottinelli is now in charge of the Atelier Daciano da Costa, which exhibits and reedits original pieces from his vast archive to share and make his legacy known. Architect, "militant advocate of design", professor, painter, his work has an importance that transcends borders and that has largely contributed to create a "modern landscape in Portugal". In national territory, it is possible to find the memory of Daciano in buildings such as the Calouste Gulbenkian Foundation or the Belém Cultural Centre. It has also reached Paris and is on its way to New York. A world of infinite possibilities, left by an unequalled creator who transmitted his appreciation for creativity and his esteem for genius to all of his family. In conversation with Vogue, Inês Cottinelli assumes that she grew up in a creative, emotional and colourful world. Today, she works to keep his father patrimony alive and to inspire future generations of creators to surpass themselves. Just like he did.

Your father said that "architecture is for people to live." What is your relation to this definition?

The historian Rui Afonso Santos said that my father's work had a very strong ethical conscience and the notion of social performance. My father saw design as a mean of social transformation. He said that the design existed to change the world. He thought that the objects ended only with the use and the fruition of each of us. Architecture was, for him, the interdisciplinarity between the outsider and the inside space.

Did you decide to embark into the world of architecture by the direct influence of your father? How did you establish your personal relationship with this area?

I am one of five sisters and I am a landscaper. I had a very close relationship with my father regarding themes that concerned the countryside. And I got into landscape architecture precisely because there was that will of the outside space, of the architecture of the land. I put my feet in architecture always in the sense of that relationship to the landscape. Every definition comes intuitively and emotionally, not as much as in a rational way. And I was lucky to have that natural familiarity and cultural heritage.

How does it come about this desire to continue your father's legacy?

I didn't agree with the dissociation of the Society without "tidying up the house" first. I wanted to understand if there was a new course to give to that society. Which was, after all, a reference and a name in the Portuguese design of the 20th century. And I assumed the leadership of communicating and enrich my father's work. I registered the brand Daciano da Costa as a design brand with my father's signature. I started to understand his work in much better detail. I have been getting to know him a lot better since he left us and I started this project in 2013.

What does the Atelier Daciano da Costa do?

We have an exhibition space, a workspace and a space to receive people. This project goes through an institutional area, which means, to explain where the work of Daciano can be found. It was essential to arrange his work. Part of his archive is already categorized and available for when I need to consult it. Then, it was necessary to establish and maintain contacts with the institutions that supported the work of Daciano, like the Calouste Gulbenkian Foundation and the CCB. And the human component, people keep giving meaning and are essential to value the work. We are here to listen, receive and understand if it is necessary to recover, repair, disclose. Communication is the base. My father worked a lot, he has extensive work, but the communication was zero. We were in the inverse proportion.

How do you see this experience of influencing other artists?

It was fundamental to understand how other professionals reinterpreted Daciano. It was a very important conducting thread for our project. To perceive how these objects could live in other environments other than those that were projected by Daciano. To see Daciano's pieces populate people's universes is the affective component and one of the engines of this project. To the younger generations, if I don't do this work of communication, they will never know who he was nor the importance he had. There is a will to bring that universe of students and collaborators to this space. We want it to be a creative environment and inspiring to new generations of designers. I need a vehicle that eternalizes his collection, it has to be able to live by itself and become a Foundation. That is a dream a have.

Now that the collection of Daciano da Costa integrates international museums, what do you expect for the future fo the work of Daciano?

I really wanted for the work of Daciano to be in two museums abroad, which were the museums my father said were the museums of reference to him. They were the Centre Pompidou and the MOMA. And, in 2015, it entered the permanent collection of the Pompidou. The entrance to the MOMA was delayed due to the pandemic, but we are still working on it. That communication is part of a curatorial logic to communicate the seriousness of not distorting the author's intention on a certain intervention. We are going to continue to improve the website and launch our online store.

"I defend that teaching is a creative act", stated your father in 1998. Being creativity the theme of this issue, how would you define it? What does creativity mean to you?

Creativity is the mental and manual action of creating something. For me, creativity represents something spontaneous. It would have to be a result of everything that is an inspiration. Creativity is the engine of our lives. Rational creativity is not possible, I don't understand it like that. The minute one is thinking that they have to be creative, they are not. It is an attitude.

Your father was one of the most creative people of his generation. How was he like as a creative person? How was his creative process?

His process was completely manual, it was to draw. He said that drawing was the only way he could think. His inspiration was travelling, he didn't take pictures, he used drawing as a way of seeing. Drawing brought him a unique dimension. He said that people could only do best that which they did every day. And he had to work a lot because he had a family, which was also a motivation for my father. His creativity came from both sides. I believe he began by thinking of the whole and not dissociate the various disciplines.

Did your father promote your creative side? What did he teach you?

He rarely talked of himself and his work. He talked of his work travels, always brought us souvenirs and craftmanship objects which were important to him, and allowed us to be touched by culture. He never imposed architecture. We had liberty and autonomy. We grew up with that. The only time he said no to me was when I said I wanted to be a sculptor. He was afraid that with that choice it would be harder for me to become independent. He very much promoted the creative side, but he also had that caution. He only had daughters and so he had that concern of leaving us with the necessary tools to be self-sufficient and free. He believed a lot in us, he said that the women's world was much more fun and creative.

How is your relationship with creativity, and how is your creative process?

I had the will to combine all of which I thought of sculpture. It was a thing that was part of my day to day life since I was little. And I was pushed by my father for that manually. The way of creating and my creativity also came from that bridge I established between architecture and landscape because I could not separate one thing from the other. I had that urge to create organic spaces. However, there is also the creative side of being a mother. The creative approaches are numerous.

Do you feel that somehow you had difficulty creating your own artistic identity, without influences from your family?

It was very easy to create my personal identity. The search for the exceptional can prove to be disastrous, that pressure to creat to be exceptional. The trivial can also be fantastic. The will to create is to understand which are the needs. The motive can not be ourselves, that is wrong. My biggest creative act was when I decided to go forward with this project in 2013. Every day I feel the urge to create and enable that creation in new generations of designers.

How did you feel being the daughter of Daciano da Costa? Did you feel any added pressure?

We all suffered from the same dilemma: the apple doesn't fall far from the tree. There was that genetic component and we could value it or not. My father used to tell us to never be lazy and be "very serious with your work." That seriousness and that severity were sometimes tiring. He was an intense person. I remember my father giving us exercises in which we had to draw with a motive. We got used to drawing our thoughts. And in those cases, there was the matter of who was going to create the best drawing. They were creative family moments.

In which way being so involved in the work of Daciano da Costa influenced your professional path?

It influenced me a lot. The colour palette with which we lived and the materials. The timelessness of my father's design is evident and for everyone to see. I remember the colours of Hotel Alvor having influenced me, which were the colours of the boats. In our car journeys, we had discussions about colour, light, architecture, landscape, everything. We were that lucky. And they are there, engraved. That critical and aesthetical sense, of the material, the structure and texture.

Being a creative person, how has this new lockdown affected your artistic production?