For more than 20 years she's been the soundtrack for New York, city that turned her into one of the most curious characters for house music. Dj, activist, designer, "black trans woman", that's how Honey Dijon describes herself. Her message leaves the realm of nocturnal underground to reach the minds of a greater audience. Because clubs aren't only places of fun and hedonism. Pacts of freedom, throughout History, have also begun on the dancefloor. 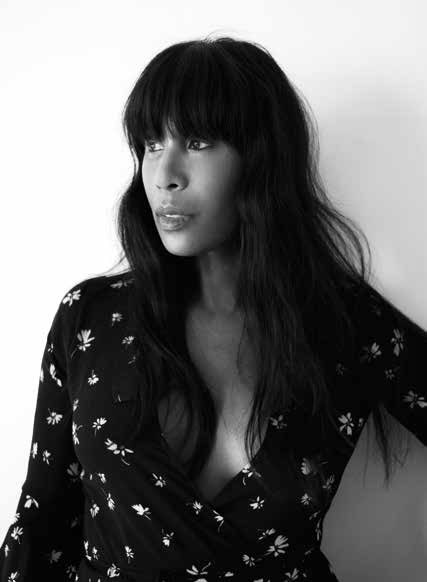 "Are you safe?" It's the first question I ask Honey Dijon. Our phone conversation starts off with a knot in our stomachs. The sentences we say are left mid-way. We recall articles we've read in the past few days. "How did the virus spread so fast, in Italy?", she asks. The country is upside down, thousands of people have died. The strange COVID-19 that tear down Asia, is now advancing fast over Europe and America. In Lisbon, all places open to the public have now been closed. And, at the moment of our conversation, a state of emergency is about to be declared. Only confinement can avoid contamination. Forgetting your sorrows on the dance floor is no longer possible. We've just entered a phase where we can't dance with one another in person. "I just want the world to heal. This virus is affecting everything and everyone, it doesn't discriminate against class or race. It's hard to think that only two weeks ago our lives were so different, everything changed from day to night. When we get through this moment in History, the fact that people are able to be together again will certainly be very spiritual. And, as an artist, I want to be an enabler of it."

The awkwardness on the beginning of our conversation goes away, the voice of Honey gains a renewed reassurance. Her sentences could work as verses of a dancing tune turned hymn, you'd just have to add the right beat. "I want people to be free, sexual, I want them to dress up to go out, want them to laugh and get excited. I want to create environments where it's possible to let things go. It's my purpose as a Dj and it hasn't changed since I started 20 years ago." I've never met Honey Dijon in person, yet I danced to her music until sunrise, near the bank of Tagus River, at Lux in Lisbon. When she's in the Dj booth, her long silhouette moves as much as those of the ones who dance before her. "To make others dance, you have to dance too", she says. In her last performance, unstoppable, the Lisbon crowd was crying out for the music not to stop. Honey, which calls herself "Mama" of all her fans, agreed. She was burning incense within her booth. The sun was way high when she gave it - and all of us - a rest.

The aura of Honey Dijon and the way she entices androginy seems to want to recall Gace Jones' Nightclubbing, from early 80s. Her reputation doesn't cease to grow. It's like a muse that seems to have come from the most outsider basements to save clubbing from a standardization. It is said that she performed with her chest bare at the Berghain's Panorama Bar, in Berlin (where sexual freedom is celebrated and phone cameras are forbidden). In a video for italian Vogue, in which she dresses in Vivienne Westwood clothes, Honey dances doing something similar to it. She is, in fact, celebrating her body. "Nobody talks about trans sexuality, and it is always seen from a heteronormative point of view, nobody ever asks how do we pleasure our bodies. They always reduce it to our genitalia, except people have sex with different kinds of bodies. End of story... There are people who have a penis and boobs, others have muscles and a vagina. And there's always this controversy: it's said that trans women always trick heterossexual men. But... How can you trick someone when attraction is involved?"

The artist resides currently in Berlin, city she traded in New York for. The endless avenues became too corporate and gentrified, the party there no longer tastes the same. "I always say I was born in Chicago and raised in New York, where I moved to by the end of the 90s. I was sucked into the night world, I'd go out to dance and was accepted for who I was." Honey is an advocate for the club culture that existed in the pre-internet age. She feels the conversation coming from that era should continue. "Clubs were a way to have access to your community and also to survive. At the time, most trans lived at night, and were either sex-workers or performers... Clubs allowed outsiders to make money, and survive. There was a network there, of doctors or health professionals that could help someone that had HIV, for instance. Clubs are places very important to me... And, well, at the time we didn't live with this awareness of numbers, we didn't depend on how many followers we had." Honey refers to social media. It was like that already before, but in this quarentine age, it is more than ever a means of communication. "Our vocabulary wasn't tracked. And I may be a part of the last generation whose identity isn't depending on a popularity contest. Now, it's like our lives have gone corporate as well." Honey's age remains a mistery - she must have been born somewhere in the 70s decade, time when she listened to her mother sing gospel every sunday morning. "My parents would throw garage parties and I'd stay at the entrance to hear the laughs and joy of all of it."

At about 13, she started getting fake IDs and adventuring through her first nights out, dressing up to grow her age. Honey starts to describe the magic of the first house music parties, ones that had specific dress codes. "It was through the black kids that imitated the looks they'd see in magazines that I first heard about italian and french fashion. Can you imagine what a black kid does in the suburbs with L'Uomo Vogue at home?", she asks. "People would dress up to dance and dance until their clothes came off", she recalls. History ended up revealing the social importance of house music in the way it democratized the dancefloor. It was the place where outsiders could get together without being judged. It was in those parties, originally from Chicago, that she spent her youth. "You've got to understand, house music was created by black and queer people and mainstream didn't look at those cultures like it does now."

Her first job was at 16 years old. She filled stocks on a pharmacy. "This means that sometimes I would put water on the shelves, sometimes magazines. It was here I discouvered Azzedine Alaia silhouetes and Gilles Bensimon photography. I was obsessed with the images and immediately started trying to figure out who did what in shoots." I ask her if she was popular in her teenage years and Honey reminds me that the term non-binary is relatively recent: "It's like five years old, the concept, no? So I didn't have many friends. There was a lot of misoginy in the male and patriarchical environments. If you were someone that was female and presented yourself as a boy, you'd scare people." Her friends were fashion magazines and records with their credits' list. They gave her what's called an education. Publications that captured her attention on a daily basis whilst growing up, celebrate her now. It's common to see her on the front rows of Burberry or Rick Owens. She signed, multiple times, the soundtrack of Kim Jones' shows for Louis Vuitton.

New York must have worked as a pool of connections. For years, she'd play the nights of the iconic Ladyfag. At 11:11 and Battle Hymn, the party that was revered as a place of resistence when Trump was elected or when, in another part of America, on the nightclub Pulse, a homophobic massacre was comitted in june 2016. Last year, colaborating with Comme des Garçons, she released the capsule Honey Fucking Dijon. "It's a platform where I'll be able to bring back universes of subcultures that disappeared". In these days of isolations, she's working in her second collection. Last summer, Madonna asked her a remix for the song I Don't Search, I Find. "It was deep, she's connected to a moment in History that I love, and involved with Keith Haring and Basquiat. The three are connected to the New York clubs of the beginning of the eighties, it was then she started singing. And she was always so vocal during the AIDS epidemic and defending gays." Honey stresses that she only intends to remix music of artists that share her musical values.

There's a video of a Boiler Room, in Melbourne, in which Honey Dijon puts together the speech I Have a Dream, from activist Martin Luther King, to the beats of her music. It'll give you goose bumps. The speech from 1963 says: "I have a dream that my four little children will one day live in a nation where they will not be judged by the color of their skin but by the content of their character.” It is said that house music isn't groove, but a feeling of freedom. The beats from Honey resemble this with conviction. We dance alone now, in a strange quarentine. When this is all over, what resolutions will you accomplish? When we dance again, how is it going to be?