English Version | Of all, none

He wrote as if he was many. He lived as if he was nobody. Fernando Pessoa unfolded himself in dozens of heteronyms, literary personalities with their own lives, shapes and dreams, who helped him loosing himself from an infinite desire in wanting to be others. The writer, who from an early age was confronted with the anguish inflicted by loneliness and lucidity, never managed to escape the existential boredom caused by the fragmentation of the self - like “a room with innumerable fantastic mirrors that distort by false reflections one single pre-existing reality which is not there in any of them and is there in them all.” 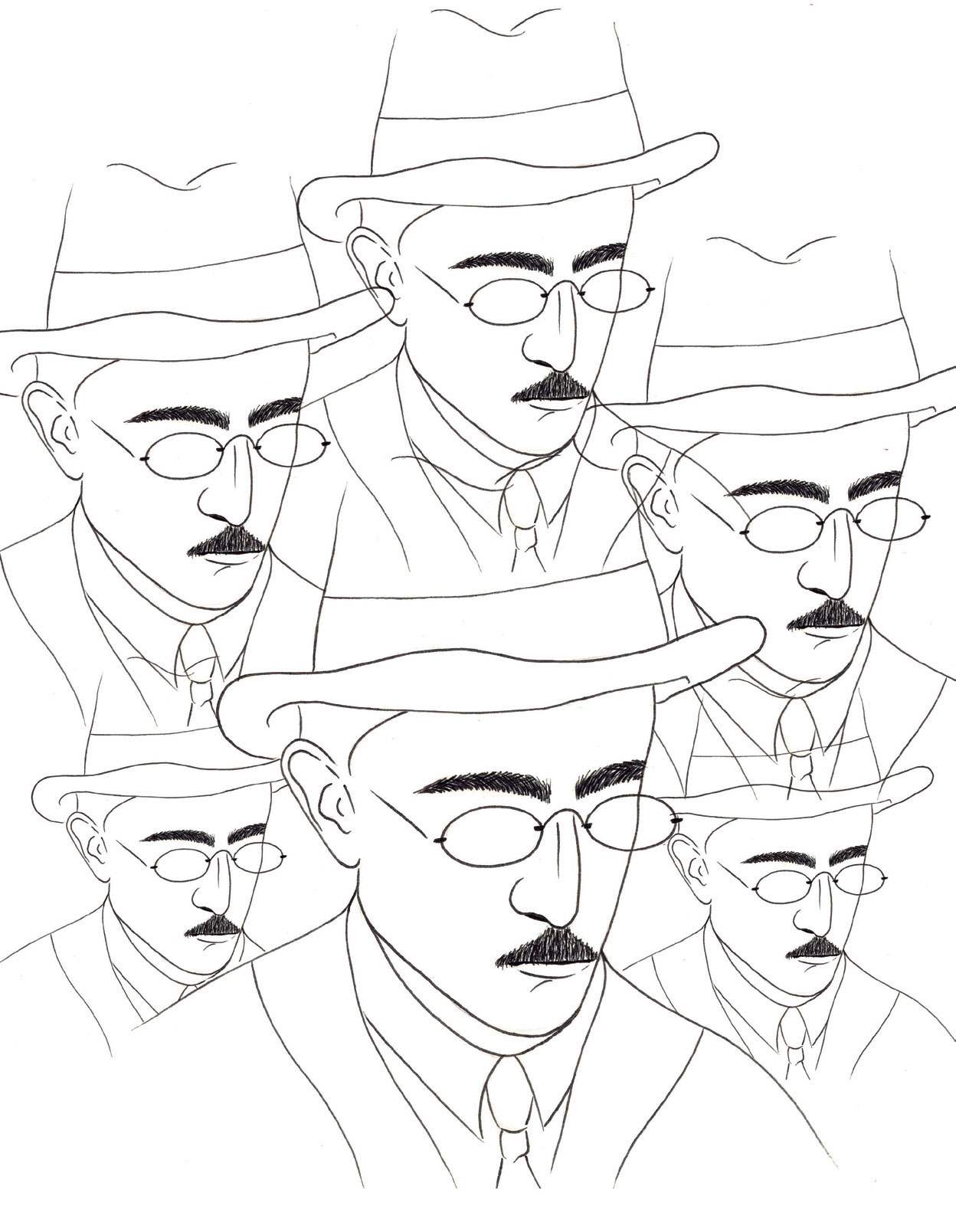 He had in itself all the dreams in the world. And that was, at the same time, his glory and his greatest sin. “He was a man who knew languages and wrote and verses. He won his bread and wine by putting words in place of words, he made verses as verses do, as if it were the first time. He started by calling himself Fernando, a person like everyone else. One day he remembered announcing the imminent appearance of a super-Camões, a Camões much larger than the old one, but, being a known discreet person, who used to walk around the Douradores in a light raincoat, bow tie and hat without feathers, he did not say that the super-Camões was himself. After all, a super-Camões does not go beyond being a bigger camões, and he was in reserve to be Fernando Pessoa, a phenomenon never seen before in Portugal. Naturally, his life was made up of days, and of the days we know that they are the same but do not repeat themselves, so it is not surprising that in one of these, when Fernando was passing in front of a mirror, perceived, at a glance, another person. He thought it was more of an optical illusion, one that is always happening without us paying attention to it, or that the last glass of brandy had made him sick in his liver and head, but, due to the cause, he took a step back to confirm that, as is the current voice, the mirrors are not mistaken when presenting. At least he had been wrong: there was a man looking out of the mirror, and that man was not Fernando Pessoa.” This is how José Saramago (1922-2010), 1998 Nobel Prize for Literature, defined the author of the Book of Disquiet, in an essay published in Cadernos de Saramago. Among the hundreds of studies dedicated to the man who revolutionized the use of heteronyms (which the dictionary defines as a “name and character invented by an author to sign works with different literary styles”), this is perhaps the most sincere and, for this very reason, disconcerting - because it does not pretend to explain who Fernando Pessoa was, it just celebrates the legacy of its existence. “This Fernando Pessoa never really got to be sure of who he was, but because of that doubt, we get to know a little more about who we are.”

Unanimously recognized as the most universal Portuguese poet, Fernando António Nogueira Pessoa was born on June 13, 1888, in Largo de São Carlos, in Lisbon. But the one who wanted to be, at the same time, Alberto Caeiro, Ricardo Reis or Álvaro de Campos (among so many others), was also a philosopher, a playwright, an essayist, a translator, a publicist, an astrologer, a commercial correspondent, a literary critic and a political commentator. Or so his biography, a task impossible to carry out with precision, tells. A discreet man, with a peaceful and mundane existence, he had a modest public life, which contrasts in everything with his impressive, and brilliant, literary production. Fernando Pessoa lived a brief existence, whose highlight, in professional terms, was the launch of the magazine Orpheu, in 1915, and the publication of a book of poems, Mensagem, in 1934. It was precisely his death, at the age of 47, that gave birth to a writer greater than any definition of immortality. The discovery of his “ark”, in the early 1940s, a gigantic trunk that hid more than 25 thousand pages of poetry, short stories, analyzes, outbursts, horoscopes, and an endless number of topics - handwritten, typed or just scribbled in illegible form, in Portuguese, English and French - was the beginning of a long path in trying to uncover the thousand and one pessoas hidden in Pessoa, which include, it is known today, a poor hunchback named Maria José, hopelessly in love with a locksmith who passed the window where she sat every day, listless, watching the city; a tragically lonely French essayist, Jean Seul; or Alexander Search, one of the de facto authors of the poetic work carried out during Fernando Pessoa's youth. Far from being a preciousness, the use of heteronyms was a vital necessity, similar to the relationship of inevitability, and urgency, that he maintained with writing. As you can read on Casa Fernando Pessoa website, “Pessoa wrote in notebooks, on loose sheets, on the back of letters, in advertisements and pamphlets, on the letterheads of the firms he worked for and the cafes he went to, in envelopes, in scraps of paper and in the margins of his ancient texts. To add to the confusion, he wrote under dozens of names, a practice - or compulsion - that started in childhood. He called heteronyms to the most important of these ‘other selves’, endowing them with their own biographies, physical characteristics, personalities, political views, religious attitudes and literary activities.”

Even so, the use of a persona, of an alternative identity, was not unusual in the cultural environments of the early 20th century. Ezra Pound (1885-1972) and T.S. Eliot (1888-1965), two of the greatest figures in the modernist movement, did so. William Butler Yeats (1865-1939), better known as W.B.Yeats, and one of the most prominent Irish poets, too. It would be only natural that Fernando Pessoa, contemporary of all these names, would also do so. In 2015, on RTP’s program A Ronda da Noite, the American writer and translator Richard Zenith made a detailed analysis of Pessoa's use of heteronyms. In the expert's opinion - awarded with the Prémio Pessoa 2012 - this ruse was “more than a literary game, because it started when Pessoa was small, as a child he already fed these other selves, who are quite different facets from Pessoa. He is a multifaceted man, like no other, but he is always Fernando Pessoa. In fact, the heteronyms are all single, more or less the age of Pessoa, and in their biographies they are usually orphans, without a mother, without a father, and have characteristics like Fernando Pessoa himself.” Among his gigantic estate, more than 70 heteronyms were discovered, but, as Zenith emphasized, few ended up having the relevance of Alberto Caeiro, Ricardo Reis or Álvaro de Campos - except perhaps Bernardo Soares. “Pessoa wrote [under] more than 70 names, but sometimes many of those names appeared in only one text, or in a few texts. There will be, perhaps, 15 or 20, of these ‘personalities'", warned Zenith, who sees the creation of heteronyms as a kind of Pessoa's “extended family”. Solitude and melancholy were, from an early age, the great companions of the Portuguese writer. At the age of five he lost his father and brother, victims of tuberculosis, within six months. In the face of the indecipherable enigma of the world, which consumed him, and the unhappiness caused by an extreme lucidity, which he always demonstrated, he took refuge in an intense artistic creation, which only ended with his disappearance.

Or maybe it never ended. The day before he died, Fernando Pessoa wrote what is considered his last sentence, in English: “I know not what tomorrow will bring”. But, in a way, both the next day and the whole future were long defined. Pessoa's intellectual training was stimulated from an early age, both by his father, Joaquim de Seabra Pessoa, a civil servant and music critic at Diário de Notícias newspaper, and by his mother, Maria Madalena Pinheiro Nogueira, who taught him to read and write. The sudden disappearance of his dad, and his mother's marriage to a naval officer, João Miguel Rosa, later deployed to Durban, capital of the English colony of Natal (South Africa), where Pessoa would end up living most of his childhood and adolescence, they would be crucial in defining his personality (personalities?) - Chevalier de Pas, the first heteronym, emerged when he was only six years old. His creation would be explained, decades later, in a letter addressed to the writer Adolfo Casais Monteiro, his personal friend: “Since I was a child I had the tendency to create a fictional world around me, to surround myself with friends and acquaintances that never existed. (I don't know, of course, if they didn't really exist, or if I don't exist. In these things, as in all things, we shouldn't be dogmatic). Since I know myself as being what I call myself, I remember mentally needing, in figure, movements, character and history, several unreal figures that were as visible to me and mine as the things we call, perhaps abusively, the real life. This trend, which comes to me since I remember being myself, has always accompanied me, changing the type of music I love, but never changing its way of enchanting. I thus remember what seems to me to have been my first heteronym, or rather my first nonexistent acquaintance - a certain Chevalier de Pas of my six years, for whom I wrote letters to myself, and whose figure, not entirely vague, still conquers that part of my affection that borders on longing. I remember, with less clarity, another figure, whose name no longer occurs to me but who also had a foreigner, who was, I don't know in what, a rival of that Chevalier de Pas... Things that happen to all children ? Without a doubt - or maybe. But I lived them to such an extent that I still live them, since I remember them in such a way that an effort is needed to let me know that they were not realities.” The grounds of what would become the giants Ricardo Reis and Álvaro de Campos - the first, a doctor, came from Porto but lived in Brazil, expatriated “spontaneously for being monarchical”; the second, a naval engineer, born in Tavira, was tall and had an “ordinary high school education” - were launched. Many more would be born after them. Some are still hiding in a trunk that seems to have no end. In the eagerness in wanting to be others, in wanting want to be everyone, Pessoa may, after all, have been none.