Women’s rights. Female genital mutilation. Abortion. Disform beauty. Looking at Paula Rego’s paintings is like looking at women’s stories, and to understand that Art can simply recreate what the eyes – or the imagination – see. 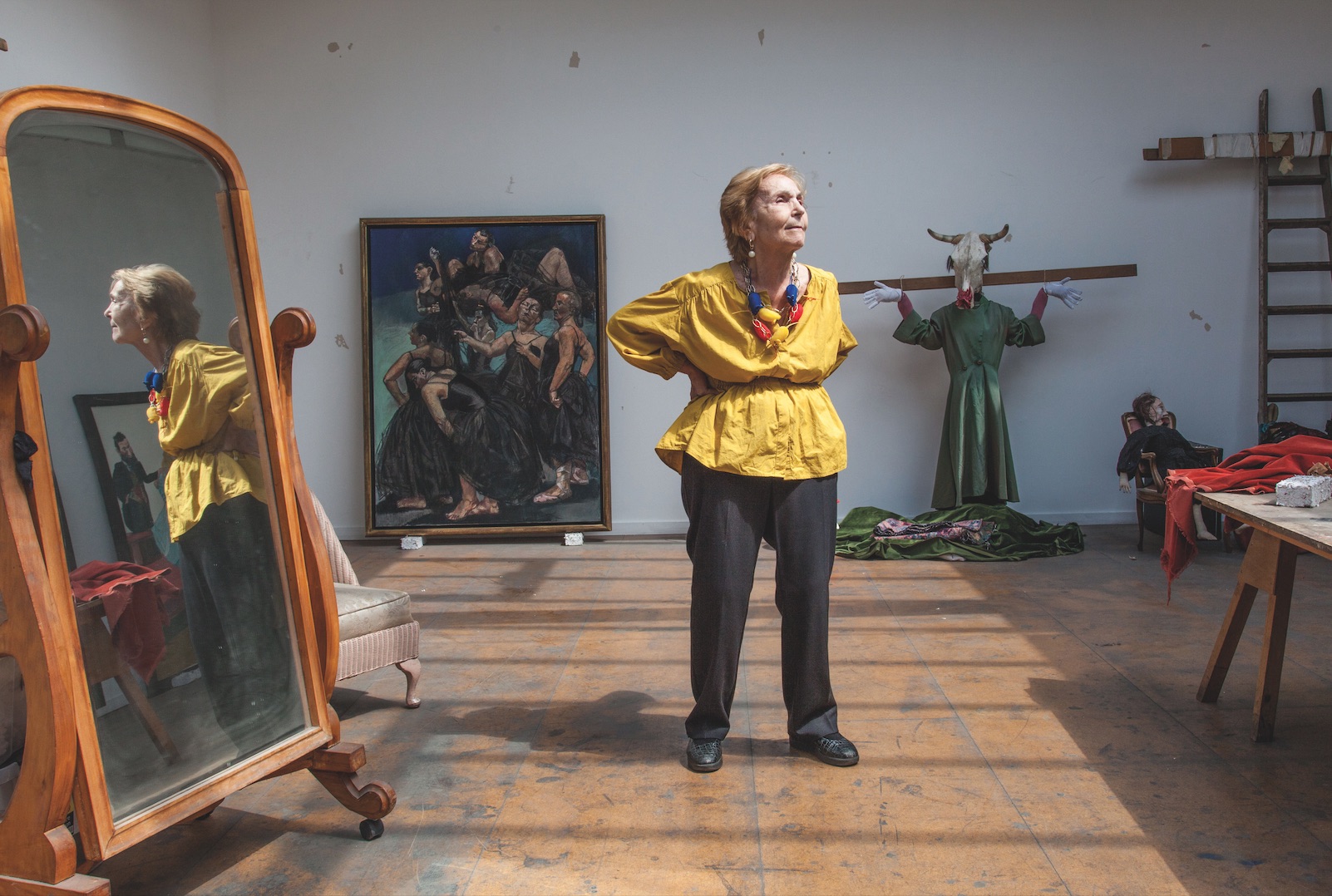 “Maria Paula Quaresma Paiva Figueiroa Rego Willing. That is me. It is a very long name, because it has my mother’s, my mother family’s, and the last one is from my husband. That is me.” Paula Rego described herself like that on an interview to TVI [a portuguese tv channel], in 2011. Paula Rego is the sum of all she has thought, lived, and felt. And so, we are not surprised to know that Paula Rego feels like Portugal. When she was 15 years old, her father told her: “You must leave here, because this [Portugal] is not a country for women. Go away,” she recalled on that same interview. “And he sent me. He sent me away (…). There were no rights, women were not allowed to have bank accounts. They could not have anything. Husbands were their bosses, they would beat them and all that stuff. Or they had to constantly play canastra [portuguese card game]and eat cakes at Garrett. And I hated all those things,” she said. You cannot play canastra?” asked the journalist. “No,” she answered with outrage. “I play poker.”

Today, almost a decade after these extraordinary statements that leave anybody speechless, Paula Rego is not able to talk to Vogue in person, but she keeps her honesty and boldness when she answers each question by email. The portuguese artist, who has just turned 85 years old, admits, with no rodeos, that she feels “very uncomfortable” while painting, and says that she does not want anything but her art to convey “truths”. She is a woman of secrets, but not of silences. Paula listens to music while she works: opera in the morning – La Traviata specifically – and fadoin the afternoon. These are the sounds that accompany her work at the studio, where she lives and does what she cannot do in Portugal: paint. And despite each of her canvas, engravings or drawings depict memories from the time she spent in Portugal, the painter needs physical distance to reproduce the things that are closer to her. To paint in Portugal is “very close to the fears.” But “which fears?” we ask her now. “Fear of the bogeymen,” she writes, with the simplicity of someone who is done with the subject. But those fears that “come from within” are those that often motivate her to paint frantically. An openly scared artist, Rego paints fears and stories, mostly from women. “I am a woman and I tell my stories,” she says, admitting that not everything she paints is forcibly real. “Many paintings came from my imagination. But what I enjoy the most is to draw. And it is more appropriate to do so with models.” That justifies a studio filled with dolls, big, small, animal-like, child-like, whatever her imagination dictates.

An imagination that does not fear reprisals nor feels inhibitions. Looking at her work, the expression “intervention artist” seems to fit her like a glove. The painter, who considers herself a “non-academic” feminist (“I stand for women’s rights”, she clarifies), defines her work as “anti-authoritarian”. Historically, her greatest challenge to authority is not hard to find, thanks to her series dedicated to abortion. It was 2000 when Paula Rego was creating a series of paintings on the subject, two years after the first referendum on the decriminalization of the voluntary termination of pregnancy (VTP) not causing any changes in law – despite the victory of the end of criminalization, the referendum was not binding, since the level of abstention was above 50 percent. It was clearly a statement. The planet kept spinning and abortion ended up needing another referendum, which happened almost ten years later, on February 2007, in order to be decriminalized. Even so, the artist’s contribution would be decisive and essential, not only as a documental record of that moment in time, but also as a flag for the fight for the recognition that women have the right to exercise control over their own bodies. Meanwhile, the rules have changed, and the world has gone backwards. In 2019, several american states approved laws criminalizing abortion. Under Donald Trump’s administration, the state of Alabama was the first to pass a law, as historical as radical, setting severe penalties for women and health professionals involved in voluntary terminations of pregnancy. Other states followed, with a rise of the generally called “pro-life” movement. Paula Rego intervened again, using her voice. She called it a “dangerous setback”, on a text she wrote for the The Art Newspaper. “If a woman needs to have an abortion, she will have it anyway”, she said. “If she is desperate, she will have it at a place without proper sanitation, putting her health at risk, and she will not get a doctor to do it. That is how things have been since the beginning of times. So, if 25 men in Alabama consider her to be a criminal, that will only add to her pain”, she wrote. For the artist, to banish abortion “is cruel and unfair, whether in America or any other country”. Almost a year later she tells Voguethat watching these news makes her feel nothing else than “disgust”. However, she still believes that Art can help change the world. “There is that hope,” she says.

Age brought her “interesting things”, she writes, highlighting “the chapel of Palácio de Belém and a museum in Cascais.” We can say that the painter, who grew up between Ericeira and Estoril, saw her talent be recognized on a late phase of her career. Today she gets medals, mentions, tributes and retrospectives. “I like it, these are great honors,” she admits. With a retrospective of her work scheduled for London’s Tate Britain, in 2021, the last couple of years have been particularly happy for the painter, who in 2019 was considered one of the Women of the Year by Harper’s Bazaar. Also last year, she received a Medal of Cultural Merit. The [portuguese] minister of Culture, Graça Fonseca, said “this recognition was necessary” [by the portuguese government], and highlighted its attribution to an “extraordinary artist, who always sought to transform reality through art.” When she gave her the medal, the minister stressed: “This is the last medal that was missing from our government”. And now, we cannot resist to ask one of the greatest portuguese artists what she misses in 2020. The answer was so surprising as if we had heard it in loco: “Pão de ló.” [special kind of portuguese cake]