During the sixth lockdown that befell Melbourne, Australia, Andrew Rovenko decided to take the camera and turned his daughter, Mia, into an astronaut. The result is a series, The Rocketgirl Chronicles, which is as unexpected as it is endearing. 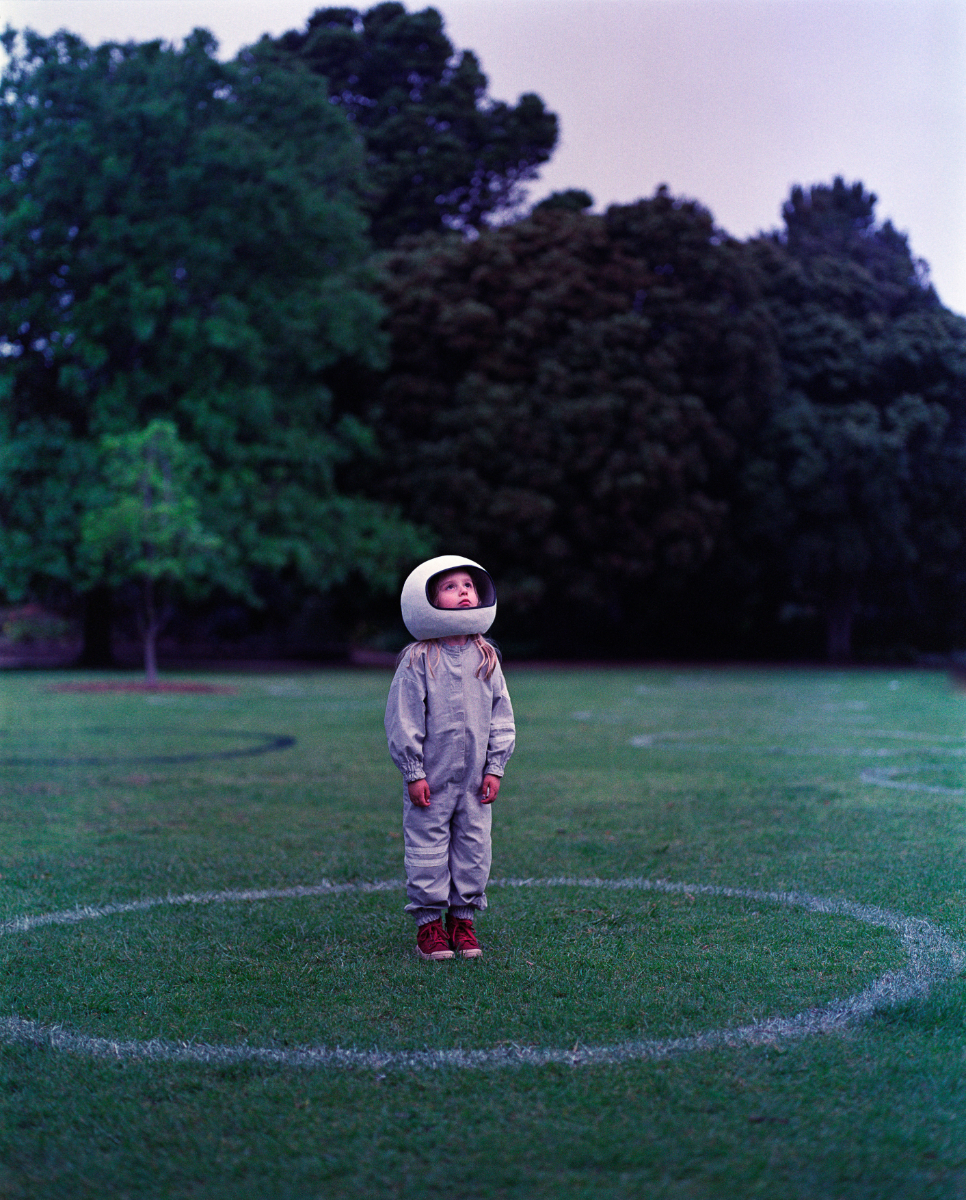 "The funny thing is, this series was never supposed to exist, just adventure time with my daughter. Our hometown of Melbourne now happens to bear the unfortunate title of the world's most locked down city, with a total of over 260 days spent under 'stay at home' orders before we started opening up again in late October. When the latest lockdown (number six) hit at full strength - our four year old was stuck in the same four walls with her two parents. We were allowed two hours of precious outdoor exercise time per day, but since all playgrounds were closed too - all we could really do is to stroll the same familiar streets. We needed to invent something to keep our daughter's curious mind occupied, and give her some new experiences within our 5km allowed travel restriction radius. This is how the idea of 'space explorations' was born." Andrew Rovenko is 43 years-old, a native of Ukraine and has lived in Australia for over 17 years. His life is invariably linked to the space imaginary. "The space theme was somehow always in the background when I was a kid myself - as well as restrictions for overseas travel. Maybe because of that I’ve always had the urge to explore more of the world, and when the opportunity to visit Australia appeared on the radar, we got on the plane and soon after it became the new home." Making The Rocketgirl Chronicles was a form of sharing and evasion. "Like most young children, asking questions about everything in the world is one of Mia's favourite activities. So as soon as she was old enough to recognise the moon and the stars in the night sky - the questions about space started to flow in, and very quickly I was out of my depth to answer them. Thanks to Google, I could pretend to be a smart dad and find explanations about galaxies, nebulas, asteroids, stars, planets... The theme was almost defined for us, as playing to Mia's natural interest seemed like an easy win. Luckily, my wife Mariya has a diploma in theatre costume design." This is how the space suit and the papier-mâché helmet were born. In no time, "the little astronaut appeared in the neighborhood." Did you have a plan? "I've learned not to plan anything too much if it involves activity with your child, as trying to fulfill plans may take away from the joy of improvising and just having fun. So we would usually pick some destination that lets the imagination run wild, even if it's just an empty block of land overgrown with weeds. And more often than not we would get distracted by something else whilst getting there, as even a lone phone booth can be fun when you can call anyone in the universe." And now? Is the series to continue? "I originally thought that Mia will get bored from being an astronaut after the first few outings. Not only have these adventures gotten us through the months of lockdown, she still enjoys them today, even though I'm back working at the office and we can't go nearly as often as before. This showed me that new experiences and stories last way longer than any toy, but I never know when she might grow out of it and which space expedition is going to be our last... And this makes every one of them extra special." Despite photographing for over 20 years, Andrew has not made it his profession. He says he's a creative technologist: "I work in this sweet spot where technology meets creative ideas, which doesn't really make me a specialist in anything in particular, except for being able to 'figure things out'. Photography is just a personal creative outlet, which strangely found a much bigger audience than any of my previous commercial work." With this series, Rovenko invites us to take a break. And to reflect. "With these photographs documenting the time we were given to spend together - in one way they are our family memories from exploring the little world around us. But equally, those memories were made in a very strange time in the big world, so they do go hand in hand. And even though the lockdown served as a trigger for our creativity, these images are not "lockdown chronicles" in my mind, but rather a reflection of time when we were made to look closely and find beauty in everyday things."