It never happened, but it could have had happened. Platonic love can be summed up almost all this way - with an invisible, but always present, “what if”, which conditions the actions, and thoughts, of its protagonists. In the end, what prevails is a gigantic “nim”, which only serves to soften the most innocent hearts - because, in these stories, only one of the actors is available to love. 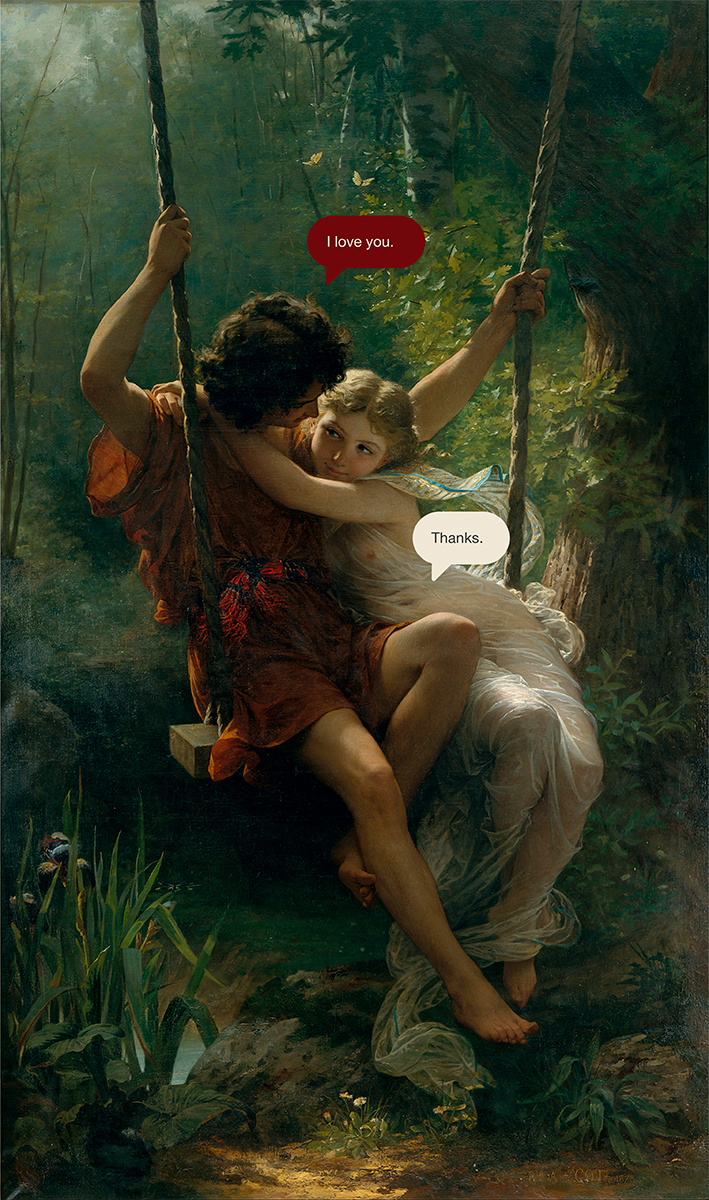 I once had a spectacular relationship - which never happened. In my head, we were striding, but steady, from the altar, even though we were both just over ten years old. It was all right. Our parents were friends. Our friends were friends. We were friends. We met at kindergarten, where we were the “terrorists on duty” and, as we continue our studies to the same school, we spent most of the days together. Nothing was planned, it just happened: he liked to play the marble, me too; he refused to eat the snacks they gave us, me too. It was easy, and simple, to be with each other. It had everything to work. Before we were born, the stars were already conspiring in our favor - he came into the world the day before me. One of our private jokes was to scrutinize how many hours, exactly, he was older than me. We were happy! When it came time to play “the dark room”, which quickly evolved into more bold games, like broom dancing, I never “crossed paths” with him, that is, I was never his obvious choice. It wasn't even necessary, I thought, we were so connected that we didn't need a slow to the sound of Bryan Adams, clinging to each other, our heads intertwined, to confirm something that I was sure of - our love. As later was confirmed, while I watched our photographs over and over again (the few that existed in the 1980’s, usually referring to special events, such as Carnival, or the beginning of the school year), he had other things in mind. And I was not part of any of those things. Because I was just “the friend”, who would stay forever in the friendzone. When he got his first girlfriend - who was, so to speak, the first girl he went hand in hand with - I felt a knife stick in my heart. And it was then that I realized that I had been centuries (when we are younger everything takes centuries) in a relationship that only existed inside my head. He never knew. I never told him that, for me, we were together half of our short existence. Why tell him? Why talk about an illusion that was only mine, and that never became real?

Today I know that this was my first Platonic relationship. “Platonic love”, an expression often used in popular vocabulary to refer to an impossible or unattainable, non-sexual love, owes its name to Plato (350 BC), a Greek philosopher who examined this type of relationship in his work The Banquet. However, the famous thinker never used the term himself. The "platonic love" defended by Plato, pass the redundancy, would be an essentially pure love, which is not based on any interest (rather in virtue) and is devoid of passions - which, according to him, are blind, material, ephemeral and false. Only in the 15th century did “platonicus love” be used for the first time by Marsilio Ficino, an Italian philosopher, when referring to a love centered on the beauty of someone's character at the expense of their physical attributes. With the publication, in 1936, of Platonic Lovers, by the English poet and playwright Sir William Davenant, the expression spread, again carrying with it the nature of virtue and empathy that had been originally given to him by Plato. In the modern world, “platonic love” is diffuse, and few can define it - but almost everyone has already experienced it. The expression serves both for relationships that exist only on a friendship level, and for those that never materialize physically. The Portuguese dictionary Priberam defines "platonic" as being an adjective "relating to Plato's school and philosophy; spiritual in character, without sexual desire, chaste; without material or worldly interests; ideal." Any of these things is practically impossible to achieve. Hence the perfect marriage with the word "love."

According to Bernardo Coelho, sociologist, researcher and university professor, “a love never lived is an idealization. We have an idealized view of the other person. A love never lived can be a tough opponent to live any [other] love. Because never loses that aura, never descends from idealization and fable we make of it.” But on what level, after all, does “platonic love” exist? What does he tell us about us, and of our way to love - and to feel? “The idea of​​unrealized love refers to two different levels. This situation implies, in some way, an imbalance of power between the people involved: the one who would like to go further (romanticizing, eroticizing and sexualizing the existing relationship), and the other one who is satisfied with the non-loving, non-erotic and non-romantic nature. sexual, of the current relationship.” That said, platonic love can take on different guises. “It can be a (cynical) game of seduction that is eternal: a permanent oscillation between yes and no, a roller coaster between light and dark, between the possibility and the impossibility of a romantic, erotic and sexual future. In this game, there are those who can be comfortable - and there are even those who look for it openly, as it is enough - but there is the possibility of a profound inequality: that which separates frustration from satisfaction, that which separates those who have the power to say to each instant yes or no, of the other who just wants. Whoever wishes to reveal, or run the risk of exposing, their vulnerability. Whoever is on the other side has the power to decide, not only their life, but also that of the other - without ever revealing what they feel.”

At a certain point in the film The Purple Rose Of Cairo (1985), directed by Woody Allen - who, by the way, appears as one of the most capable human beings with the mindset to analyze all the particularities of platonic relations - the character Cecilia, interpreted by Mia Farrow, has the following outburst: “I just met a wonderful new man! He’s fictional, but you can’t have everything.” What she says, in her innocent voice, is what many of us think. The phrase sums up what, nowadays, is commonly understood as “platonic love.” One that never gets to be. The love of the posters of our favorite actors that we have (or had) in the bedroom. The love of cassettes with romantic songs that, as covered with shame, we never delivered to "someone." The love of letters that never got written. The love of complicit looks that never turn into kisses. Or, then, the love that does not blossom for fear of rejection, that expletive that hangs, like a ghost, over the 21st century. Back to Bernardo Coelho: “Loves may not be experienced or realized because one of the people (or both) is afraid of being rejected. In this regard, it is interesting to see how meeting applications hide the rejections and only show the matches. Or how, in other cases, they only reveal secret crushes if they are matched. All of this so that people minimize the risk of rejection. Why all this fear? The answer will not be simple. But we can think that this fear is so deep because it has the capacity to shake the idea that we have of ourselves and that we want others to validate. That is, it can potentially affect our idea of ​​ourselves and how others see us as men or women. In other words, rejection has an impact on our identity as women and men. We are afraid of falling into disrepute with others for failing in cultural and social demands about what a woman and a man should be (in terms of love and sexuality).”

But is an unlived love really love? That is what we ask the sociologist, because if anyone can help us in this demand, it’s him. There are several things to consider, he stresses: “Assuming that in contemporary societies love is a permanent construction, which is a result the permanent confluence (or assessment of the confluence) of the individual projects of the people involved; starting from the idea that, nowadays, relationships are increasingly built, in equality, and in a less institutionalized way (opening doors to different ways of living love)... Bearing this in mind... I would risk saying that a love that never came to be experienced or lived, was a love that was never built or even started. So, I venture, it won't be love. Because love implies construction and confluence. It implies the management and articulation of each one's projects, it implies the articulation of the scripts that each has for their lives, it implies exposure to the demanding and permanent assessment that the other makes of us and of our role in their life and happiness (deep down, if we still make sense of the other's individual project). Ultimately, love implies that we can love and be loved equally and openly. Now, a love that has never been lived, never lived any of this. It never was. It didn't come to be.” How do we characterize, then, what we call “platonic love”? This relationship can be many things: it can be of friendship and unconditional solidarity. It can be of profound intimacy (there is even mutual disclosure of potentially embarrassing information from each person, as well as sharing unique and intense and remarkable events). It can be a profound attraction never realized because of the fears already mentioned. It can also be a lukewarm thing and not lived to not jeopardize the relationship that has already been achieved with the desired person, or to not risk the right (a stable loving relationship that you have with someone else) for the uncertainty of a new relationship that is not known what future it will have. It can be infatuation [to the letter, an irrational passion] without ever ceasing to be that eternal game of seduction, manipulation and power - also already mentioned. But it will not be love, it will not be love in construction, it will not be love in equality, it will not be love in everyday life. It won't be love. Because love demands to be lived. It is not a suspension. Although it is always a question, but a question that is answered with life.” There is a popular saying that "when one does not want, two do not dance." Neither love, we add. There it is: it never happened, but it could have had happened.