English Version | I kissed myself and Iiked it 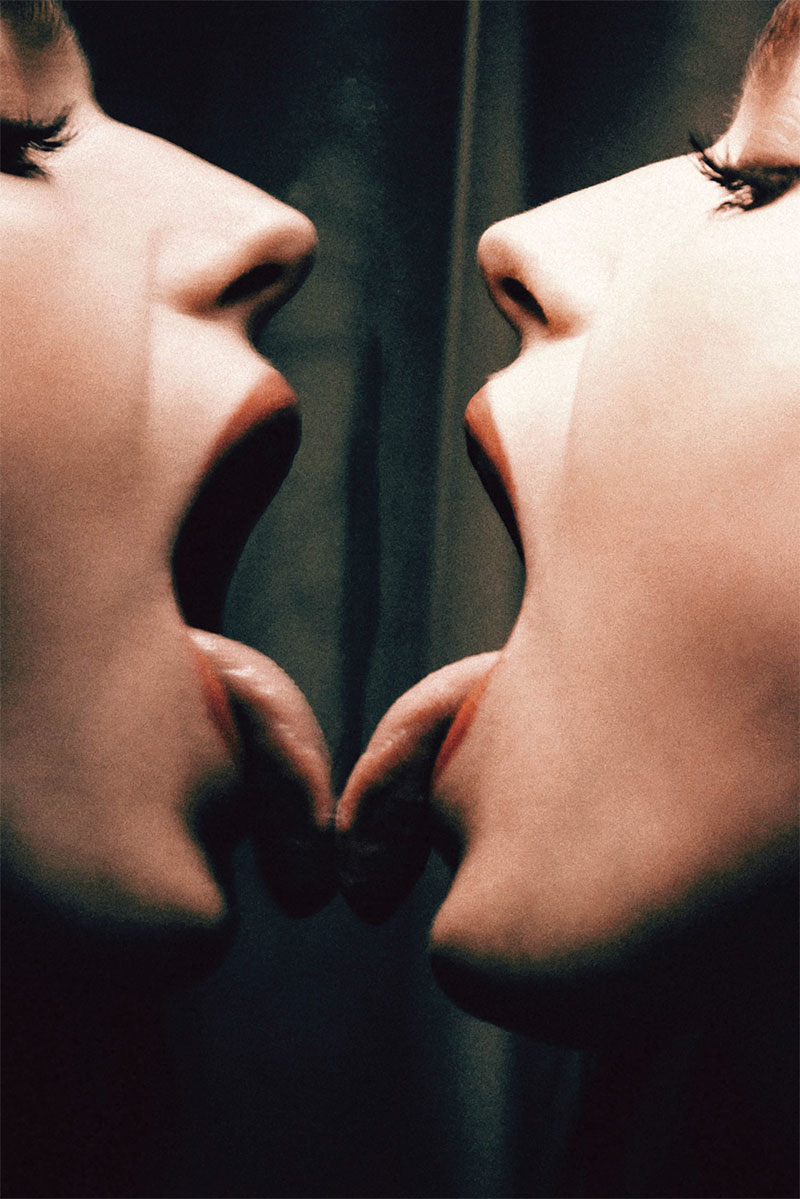 Once upon a time there was a man called Narcissus. He comes from Greek mythology, in fables and stories of poets like the Roman Ovid. A hunter from Thespias, Boeotia [Greece], Narcissus was a hero famous for his unparalleled beauty and pride in equal measure. Son of Cefiso, god of the river, and the nymph Liriope, it is said that the prophet Tiresias decreed, when he was born, that he would live a long life, as long as he never contemplated his own image. Narcissus was so beautiful that he aroused passions in both men and women alike and was equally arrogant to the point that he thought that none of these suitors, male or female, were comparable to his excellence, often refusing their affections. This overbearing arrogance caused unrequited lovers to ask the gods to avenge them. Case in point: Echo, a forest nymph who fell madly in love with the young man, though he despised her. The nymph's broken heart made her slowly disappear in anguish until there was nothing left but her echo. As a punishment, Nemesis, goddess of retribution and vengeance and, here, a sort of alter ego of Aphrodite, condemned Narcissus to fall in love with his own reflection in the lagoon of Echo. Enchanted by his own image, Narcissus lay on the edge of the water and languished while admiring himself. The nuances of the myth vary: in some, it is said that he commits suicide when he realizes that he cannot have his reflection as his better half. Others say it was young Aminias who committed suicide at Narcissus' door, asking the gods to punish him, and not Echo. In yet another hypothesis, for Pausânias, Narcissus falls in love not with his reflection, but with his twin sister, and looking at his image was the way to console himself after his sister's death, seeing her in his features drawn in the water. In any of the variants, the end is always its tragic disappearance, a consequence of the obsession with beauty itself (some argue that it arises from the ancient Greek superstition that advocated being fatal, and unlucky, seeing oneself in the mirror). After his death, Aphrodite transformed Narcissus into a flower that was then born in the place where the character perishes.

Once upon a time there was a man called Narcissus. Only it was not “once upon a time”, it continues to be so. Narcissus' character continues to live on not only through the numerous representations in Art, but also through a pathology that steals his name and arrogance, but not so much its beauty. Narcissus shows his ugliest face when narcissism manifests itself in an exaggerated way: “Narcissism corresponds to self-love and, as such, is not only a natural dimension, but also desirable; after all, it is important and necessary to like ourselves, invest and take care of ourselves in the various dimensions of our life (taking care of our appearance, physical, emotional health ...) ”, Filipe Albuquerque, clinical psychologist, explains. “Of course (...) its most exacerbated manifestations may correspond to aspects that are not so healthy. We are used to hearing the words ‘narcissism’ and ‘narcissistic’ and giving them predominantly negative connotations; this is because some so-called narcissistic traits may, in some people, correspond to more or less consolidated manifestations as traits of character and predominantly negative expression that, in the most serious forms, fit into the Narcissistic Personality Disorder. We speak here of people who show a global pattern of grandiosity, manifested in their own behavior or in the fantasies they build about themselves, who have a constant need for admiration, constantly devaluing others, who often treat them with arrogance and contempt (but who, deep down, feel intense envy). They are people unable to establish quality relationships, due to the inability to put themselves in the other's place and perceive the needs and feelings of others (they are unable to empathize) and live the relationships on a basis of superficiality and functionality, that is, they use others for what interests them (to achieve a certain goal, to gain admiration, etc.). ”

A description that matches the mythological character that remains in these traits until today. With an etymological origin in narke, which means “numb” (and where, in addition to narcissus and narcissism, the word “narcotic” also comes from), Narcissus symbolized vanity and insensitivity to the Greeks, since he was completely indifferent to advances of those who fell in love with her beauty. One of the consequences of this Narcissus-like behavior is not only linked to an extreme arrogance, inevitably related to dissatisfaction because nothing around seems to meet the demands of those who are overly narcissistic, but also to a progressive isolation of the person - but not total, since it needs its daily dose of flattery: “The narcissistic person always needs others,” corrects Filipe. “To inflate an ego always eager to be praised and admired, to achieve certain goals, to gratify your own needs (so the relationships established are always with a tendency to exploit others), you need others to devalue them and thus feel more important ... now, from an affective point of view, they are very lonely individuals, as they do not have the capacity to establish full love relationships, respect for the other, affective involvement. They have a real inability to love; the others are just objects and quickly discarded, hence the narcissistic individual has difficulty maintaining long relationships, as soon as their own wills and the other's place begin to gain or demand more space, the relationship is discarded. ” Even if the physical isolation is not total, the emotional one is. Always masked by the way he seeks the admiration and applause of others.

It is not surprising, therefore, that parallelism can be drawn between the times nowadays, in an era of social networks and likes, and the propensity to manifest this narcissistic personality. We live in a society that enjoys scrutiny and where social media promote it, giving us a window to show both our achievements and weaknesses, even inadvertently: “Undoubtedly, it is a society based on a very marked competitive record, in which what matters is to be successful, to be the best, often due to the failure and exploitation of others”, confirms the psychologist. “It is a society that is not based on principles of cooperation and mutual aid, to which only results are important (be they economic, sports, number of likes and views on social networks ...) and which is satisfied by the superficial in detriment of what is substantial and has content. We live a lot in a certain superficiality, with all the implications and consequences that this has in the relationships that are established, which often lack a deeper experience, a true connection, a concern and genuine interest and love for the other. The ostentation prevails and social networks and the phenomenon of selfies are proof and consequence of this. What matters is showing yourself, the places you have traveled, the purchases you have made ... Narcissus looked at his reflection in the water, admiring himself. It was, therefore, something closed in on itself. Now we can look at a screen to appreciate, capture and share our image and this last aspect seems to me to be relevant, since sharing through social networks what one has, conquers or displays is a form of ostentation in relation to others, to arouse the admiration and even the envy of others. Feeling admired and envied in his supposed grandiosity is the goal of the narcissist. ” But, says Albuquerque, social networks are not the root of all evil: “On the other hand, it is also important to reflect on how parents and society organize children's lives. From a very early age, they are formatted in the competitive register, either in the school context, or in the multiple activities in which they are inserted in their daily lives, and often have their time excessively filled, because being good is not enough, you have to be the best. (...) The essentials are lacking: more quality time with peers, with parents, the experience of experiences abroad, contact with nature, the affective availability of parents and significant figures, their genuine recognition of their achievements of children, the serene acceptance of their difficulties and limitations....”

So, are we created to be - or try to be - the best, often at unhealthy levels that make this ambitious a misfit within a community? Perhaps. But is it also possible to fight against this exaggeration, or not? "From a clinical point of view, a person with pathological narcissistic traits would benefit from specialized psychotherapeutic support. At a more general level, the predominantly narcissistic culture of our society would have to undergo substantial transformations, creating a space of greater tolerance and acceptance of weaknesses, limitations and imperfections, becoming more cooperative than competitive and not only concerned with profits, results, successes... (...) If we think that, deep down, the great problem of narcissism (and narcissistic aspects of society in general) is their tremendous insecurity and fragility and inability to love fully, the 'cure' would always involve genuine love, respect, interest and empathy for others, availability and acceptance of fragility, limits and imperfections, for the ability to plunge into the depth of things, instead of dwelling only on its surface ", says the psychologist. The ideal is to grow to like ourselves, but like others too, might we add.

Perhaps we are created to like the self and to win, and that is not necessarily a bad thing, as long as we do not do it at any cost (meaning, at the expense of others). Perhaps, like of genius and of madness, we all have a little of Narcissus in us. And having a little Narcissus is not necessarily a bad thing. “In the same way [that we invest and take care of ourselves in the various dimensions of our life], valuing our skills and achievements with pleasure and satisfaction also converges in the establishment of a positive self-esteem, which also depends, equally, on a healthy capacity to like ourselves ”- underline healthy in this answer by Filipe Albuquerque. “Another important aspect is that only by liking ourselves will we be able to genuinely like others, to love, and to be able to establish good quality relationships (of friendship, love, family ...), sharing and genuinely investing, being then capable to withstand and overcome the ambivalences that relationships naturally and inevitably bring, from deep down, living with the necessary fullness the connections we establish with others, in a healthy mutuality.” We repeat: having a little - a little - Narcissus is not a mad concept. “As in everything, there is virtue in balance”, concludes Albuquerque. Once upon a time there was a man named Narcissus who lived happily ever after in small doses of the self-love we each find within us. And that's how we look in the mirror and like than we see. But are not obsessed with our own reflection.

Translated from the original on the Mirror issue, published on january 2021.