English version | Lado B: As Good as It Gets

You can call them perfectionists, methodical. Write them off as “pussies” (pardon my French). As long as you don’t reference the OCD cleaning freaks. Which in English, translates to Obsessive-Compulsive Disorder. Because this is serious matter – a very serious matter. 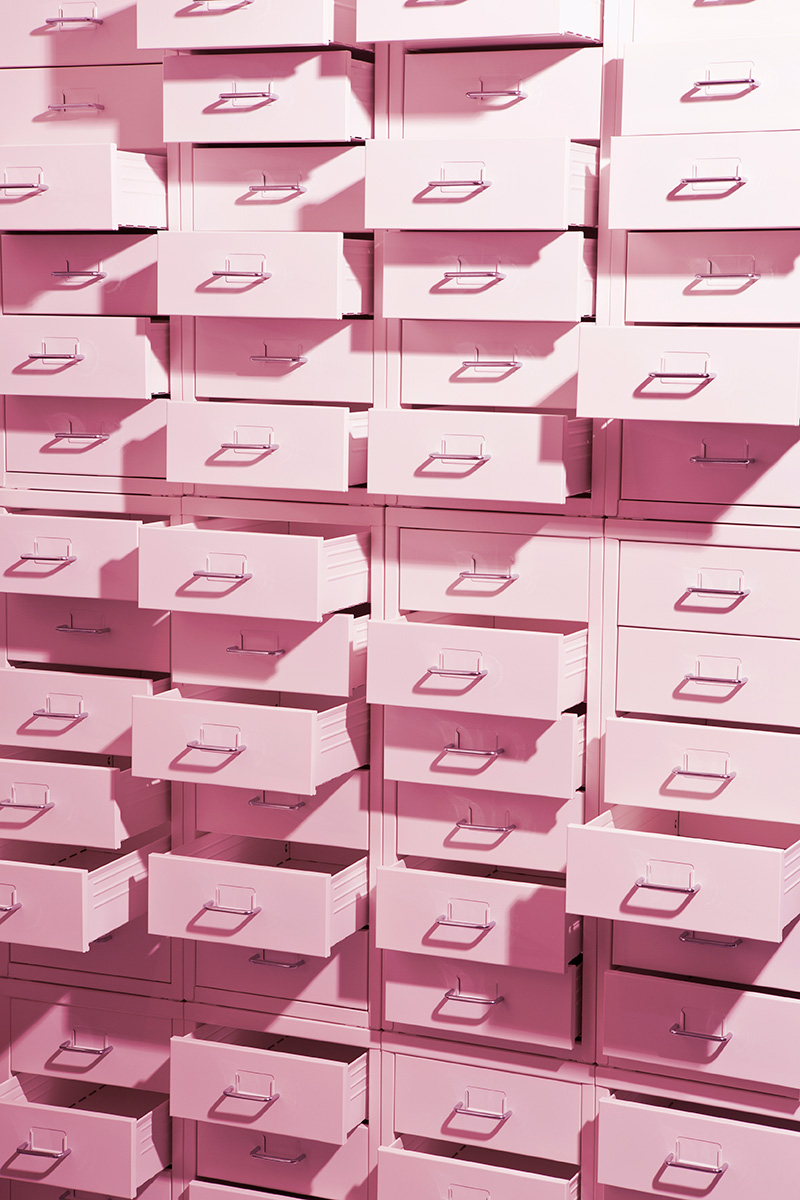 It's something that happens, on a daily basis, back home. I’m the one doing the dishes almost every single day. Since I’m a perfectionist to the point of obsession, I would rather do it myself, because I know everything will be tidier – better is always possible, of course. Everything exquisitely laid out, neat, organized. When I was younger and living with my parents, I remember that, after doing the dishes (the task rotated between me and my three siblings), my dad would go over to the kitchen, open the washing machine and rearrange everything that one of us had previously put away. He knew what he wanted. And how he wanted it. In the end, it was stronger than him not to. Today, I’ve come to realize I became just like him. And the funny thing is, I’m living with my sister, who’s the precise opposite of that. “Chaos” is her middle name. I found myself wondering if my obsession with keeping things perfectly aligned was normal at all. And why it bothered me so much if they weren’t. Why that plate must be put on that specific side of the washing machine and not thrown somewhere else, where nothing would make any sense. Indeed, just like my father before me, even if I wasn’t the one cleaning up that day, I would always end up re-doing it myself. As I got around to doing, eventually, every day. I never dug too deep into this subject, even though, lightheartedly, I have multiple times fooled around saying “I totally have OCD” – the abbreviation is so much cooler.

Not only until this moment, when I find myself writing about Obsessive-Compulsive Disorder. And then, I realized that: firstly, no, I luckily do not suffer from this condition; secondly: it is way more serious than it looks. And those who suffer from it, live tormented by its effects. It’s not something you should make fun of, no matter how funny Jack Nicholson looks in As Good As It Gets (1997), roaming around the sidewalks of New York City, pushing away everything and everyone around him while refusing to step on the lines on the pavement (fact: today, with COVID-19, pushing people away would not be that weird at all). “Studies demonstrate that at least 80% of people have strange intrusive thoughts, that are out of context and send shivers down their spine. But only 1,2% of them have OCD”, clarifies Madalena Lobo, Clinical Psychologist and CEO of the Oficina de Psicologia. And she continues: “These mental episodes are not voluntary at all. In fact, people with OCD do everything in their power to avoid and prevent them, what ends up being one of the great problems of this condition, since it aggravates and worsens its incidence. People that suffer from OCD tend to be somewhat allergic to the natural uncertainty of life.” The specialist explains to Vogue that “Obsessive-Compulsive Disorder is devastating – it represents the third most incapacitating mental health condition that exists. Almost as bad as the condition itself, is the intense shame that usually goes hand-in-hand with it. The insurgent behaviors and ideas are bizarre, weird and people diagnosed with OCD can’t even explain them properly to themselves, let alone to others.”

That’s not what Neil Hilborn, a 30-year-old American did though. A writer and a poet, Neil is part of the poetry group Button Poetry, and is the published author of four books. However, that’s not the reason he is known for. What catapulted him to success was his Obsessive-Compulsive Disorder, as well as the way he exposed it. In 2013, Neil Hilborn published a YouTube video reporting on the process of how a person suffering from OCD falls in love. And how the pain of a breakup – from which common mortals ultimately can’t run away from – grows into something not only unbearable, but almost impossible to process. Afterall, we are talking about a condition that comes from a familiar adaption of the word “obsession”. The title of the video is simply, Neil Hilborn – TOC. And it starts with: “The first time I saw her… Everything that usually goes on inside my head went mute. Every tic, every image constantly on loop, they simply disappeared. When you have Obsessive-Compulsive Disorder, these moments of peace don’t happen. Even when I’m already lying in bed, I can’t stop thinking: ‘Did I lock the door? Yes’. ‘Did I wash my hands? Yes’. ‘Did I lock the door? Yes’. ‘Did I wash my hands? Yes’”. And no, dear reader, the repetition was not a text editing error. The mind of someone suffering from this condition works exactly in this manner: it’s tiresome, draining, exhausting, extenuating and some other infinite roll of adjectives, because one sole word is not enough to portrait the fatigue this disorder entails for those who have to live with it. Every doubt or question play into this accelerated and obsessive role. One, two, three times. Ten times. A sick amount of times. As many as the equivalent level of despair that accompanies them. Nonetheless, when Neil Hilborn fell in love – and we’ll bow down to love once again for how it can solve everything (or almost everything) -, the disorder shifted a little. Neil then began to change “the locks on doors”, “the locks on doors”, for “the curve of her lips”, and “the eyelash on her cheek”, “the eyelash on her cheek”, and so on. On that same poem, the young man realizes it was due to his disorder – and the repetition that follows it – that he managed to get the girl to go out with him.

Persistence worked: “I asked her to go out six times in 30 seconds”, he proclaimed, in a very satisfied manner. The young lady accepted at the third invitation – the other three times corresponded to his condition going further, getting carried away. Until – because there’s always an “until” moment when it comes to love -, the girl confessed to Neil that “it had all been a mistake”. In the poem, Neil explores how love made him feel and we see as his obsession resurges, numbed by his feelings, along with the questions: “How come that relationship was a mistake, if I didn’t feel the need to wash my hands after touching her?”. “I can’t, I can’t, I simply cannot be without her. Usually, when I obsess over something, all I can see are the germs penetrating my skin. Then she was the first beautiful thing I tied myself to”. The end of the poem is heartbreaking and, for anyone who’s soul has the bare minimum sensibility, the despair of someone living with this condition becomes visible. In Neil’s case, the danger this derangement represented when the obsession went from things and thoughts, to being put towards a normal human being. A person who, when confronted with insanity, ran. “Having an obsession is, practically and following its Latin root (obsidere), to be surrounded, fenced – and we could even say, crushed – by something that, in this case, is an internal occurrence of cognitive nature (opposed to emotional). These are thoughts, mental images, ideas, anguishes, doubts, impulses, or a combination of all of the above, that come out of nowhere, they barge into the consciousness field, hitting the individual violently, with a feeling of eminence, truth and possibility”, Madalena Lobo explains to Vogue.

The psychologist continues: “Imagine the worse, whatever would affect you the most, whatever would fill you with troublesome – think about those things that only require a slight look at the beginning of the thought to make us shiver trying to push away the idea, repudiating it from our mind. Now picture yourself having that thought sneak up on you when you least expect it, multiple times a day, sometimes staying glued to your head for hours. Something you try to remove yourself from, but with no success whatsoever. And this leaves you stuck in that unbearable, never-ending distress.” It’s not easy finding someone suffering from this. Especially due to how, in the majority of times, people aren’t aware they have the disorder, or simply won’t admit it. Studies confirm that, on average, someone with POC only seeks out help 12 years after having experienced the first symptoms. What constitutes a problem: “Apart from certain exceptions, OCD tends to aggravate with the passage of time when it isn’t effectively treated. And it’s also not hard to understand why OCD is usually accompanied by a bigger sort of depression – which complicates even further what was an already complex treatment to begin with”, the specialist states.

As in many other mental health related issues, this disorder can derivate from a number of factors (or none of them at all): neurobiological, genetic (a study refers that those who suffer from OCD have four times more chances of having another family member also suffering from OCD), it can come from a chemical unbalance, or even be related to behavioral theories, psychoanalytical and, of course, the good old stress, besides depression. To sum it all up: why does someone suffer from OCD? “It isn’t known for sure”, the phycologist reassures. And treatment isn’t linear. Often the proposal are consultations “that are mostly moments of open discussion, explanation about what’s going on, exercises and monitoring of exercises done in between sessions, of agreement upon what each patient and psychologist decide for each step, and the resolution of difficulties that appear along the way.” And adds one final note: “OCD is an anxiety illness with very high levels of specificity and technically, it is very demanding. It’s crucial that the clinical psychologist has specialized in this disorder in order to know how to intervene – being a good psychologist is not enough, nor is it having a ton of general experience.” Regarding the line that separates being diagnosed with OCD and just being aware of your surroundings, detail-oriented or liking things to be clean and fresh, Madalena Lobo took a weight off my shoulders, and probably of a lot of other cleaning freaks’ out there: “It just means that those people have life preferences and a way of functioning that is more to the right instead of to the left.” To make things clear, I wondered: “Is it really?”. “It is”, she assures. “But for real, for real?”. “For real, for real”.