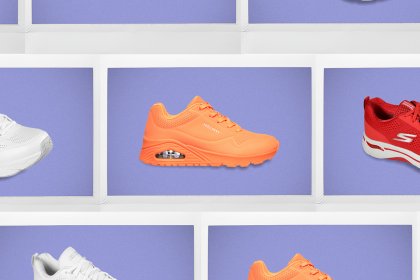 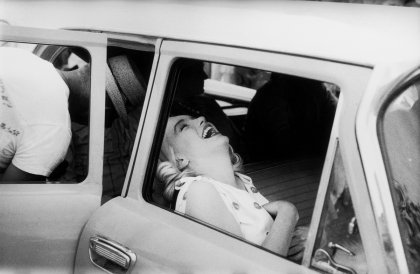 It can be any of us. Just the fact that you exist is extraordinary enough to justify leaving our mark in the world. But one doesn’t need to be a world leader or a renown artist: one can become memorable in the WC. 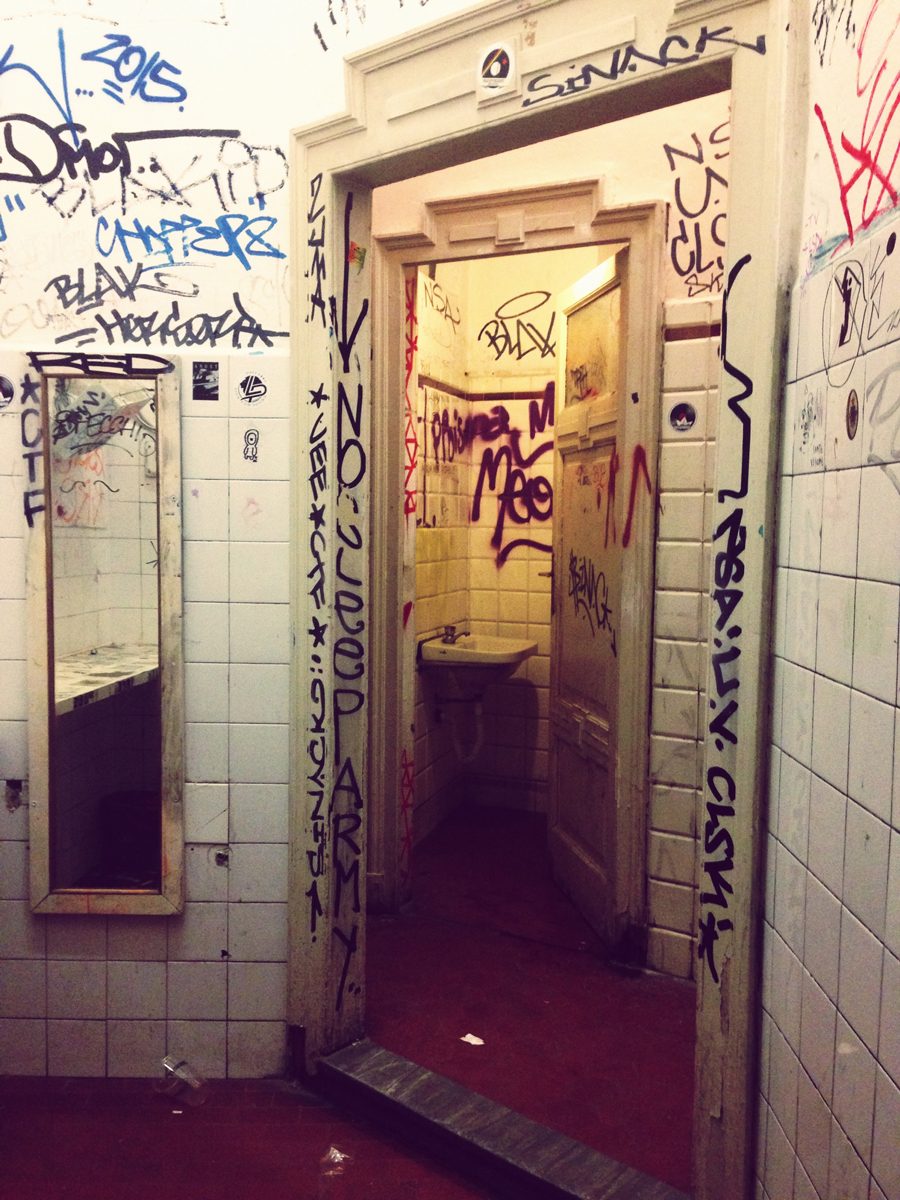 Somewhere in Lisbon, perhaps at a restaurant in Entrecampos or in the main tower of the Humanities college, there’s a public bathroom that, just like any other, is filled with drawings, phrases or just doodles. From the moment you walk in, the tiles on the wall are like pages from a notebook, but it’s inside the stall that we have the feeling of being in some kind of an art gallery. Maybe gallery is too far-fetched, because the reality is that the content surrounding isn’t exactly the refinement one usually imagines in an exhibition. Anyway, as soon as you close the door behind you, you enter a world of confessions, declarations of love, but also obscene comments that, even when you’re alone, give you a feeling of discomfort. In that fateful bathroom, I read the inscriptions as if they were literature and there was a bit of everything, but that stall door was much more poetic than the usual WC. In that small room of shared filth you could read “everyone would be better off without me”. Such an intense, intimate and catastrophic confession was in what was probably the least appropriate place to share this tragically deep thought, since there’s not much beauty in a bathroom. Or not? Maybe beauty isn’t the right word. But you can’t deny it’s a universally private spot, where one hopes to feel comfortable. Deep down, it’s a place destined for intimacy. In this line of thought, it becomes less strange to understand why it is practically guaranteed to find some kind of confession in these public spaces. And, among them, the doodles they hide or reveal, like a canvas for some artists - bathroom or not - that find an exhibition wall with no bureaucracy to let their “art” be.

Art. No quotation marks. Because we can call it art. Actually, this artistic expression even has its own name: latrinalia. A kind of street art you can find exclusively in public latrines - a more underground version of this urban art, in which artists tend to get into “a commercial logic with less modesty than graffiti artists”, as Pedro Neves explains to Vogue, an investigator in the Faculty of Fine Arts of the University of Lisbon and urban art booster through the Urban Creativity platform. One thing is for sure, latrinalia is a form of expression, whether through words or drawings. But is it art? For the investigator, it’s clear: “What is art isn’t the process of recording those inscriptions, what is art is the look from who sets that reality apart”.

Bathrooms aren’t strange to artistic creation, actually, it was over a century ago, in 1917, that Marcel Duchamp submitted to the New York Society of Independent Artists a work of art that changed the game in the art world: Fountain. That’s what he called the urinol he signed under the pseudonym “R. Mutt” that has been exhibited in some of the most important museums all over the world, like the MoMA in New York, Tate Gallery in London and Centre Pompidou in Paris. If the bathroom goes to the museum, can’t the museum be in the bathroom? Marcel Duchamp is one of the pioneers of Dadaism, an anti art movement in which revolutionary artworks are developed, for going against the convention. Pedro Neves describes the movement, that still exists today through forms like latrinalia, as a “critique to the deification of the artistic process”. That is, we generally tend to conceive the creation of art as something transcendent and divine. According to the investigator, the goal of antiart is precisely to take it off its pedestal, “pair art with life. What they wanted was to value the process of life, everything that surrounds us”. In the case of latrinalia, that seems to be exactly what it’s wanted and achieved: is there anything more frivolous than a bathroom? What is desired is precisely to “draw people’s attention to the fact that it’s in the mundane that is the supreme work of art”. Despite the power that antiart can have in the redesign of what we consider art, the truth is that “latrinalia and other artistic movements were limited to a period of time and wore themselves out in that reflection, even though they persist - urinals still exist and bathroom doors still exist”.

Assuming that this practice - which can be interpreted as vandalism at first - can be considered a form of art, maybe in the street art genre, we get to the most curious part: anyone who has, at some point in their academic career, studied any kind of art (whether it’s visual, plastic or even literary) understands that what we seek in artistic creation is nothing other than its meaning. It’s undeniable that what goes on in the mind in the moment of who creates is probably the most intriguing aspect of the entire analysis process - what was Edvard Munch thinking about when he painted The Scream or Albert Camus when he wrote The Stranger? To Pedro Neves, “those doodles express a need of whoever was inside the bathroom”. Despite “being considered art, vandalism or just signs of usage”, more than an artistic expression, the phrases that can be read in doors, walls and even mirrors are “sources of information” about how and who uses these locations. In a more practical point of view, the doodles and drawings “are incredibly valuable sources of information for who has the responsibility of creating these spaces”. According to the investigator, this is “data that can and should be interpreted by designers to improve the next project”. But, more important than being information with a practical and critical value, they are personal manifestations of who wants to make an impact one way or another - by making an anonymous confession, a declaration of love, a thought discharge or even trying to create discomfort in whoever is lucky enough to find that signal. To this purge of ideas or feelings, Pedro Neves calls “the art of simply existing, the art of being present in reality”.

The idea of considering doodles on public bathroom doors art may be strange, maybe even absurd, but the truth is that there’s something especially intimate in a context of a WC, in having a moment where privacy is a requirement - and, therefore, we are obligated to be only with ourselves. Even more curious is that, despite these being personal reflections, latrinalia is a movement that exists in shared spaces: “it’s not in the bathroom of their own homes that people put these inscriptions, it’s in the bathroom where there will be an audience”. Does it seem somewhat paradoxical? It’s an expression of private thoughts done in a place meant for moments of the kind, but they are destined for someone. The investigator agrees that “it’s a fact that people who are in a bathroom have their privacy in the moment they’re there”, the point is that in public places where latrinalia can be found “there are moments of privacy, but one at a time and of many people”. In the context of such a personal expression, the process of writing in the walls of a stall “is an intimate act in the sense that you can write whatever you want from your darkest inside, but you know someone will read it, it will be contacted by someone. It’s not intimate as something you do for yourself”, like it happened with many works by Van Gogh, that only saw daylight after the painter’s death. In the case of latrinalia, “there’s an inherent exposure to the act of scribbling on a bathroom”, because, writing in a place where it is guaranteed someone will see, there’s “a search for the contact with the other”.

No matter how poetic this all sounds, it’s also true that those who have dedicated their time to appreciating the inscriptions in public bathrooms know it’s far more likely to find obscene phrases and drawings, and not a sonnet - but this kind of findings are not impossible. When we walk into a WC, we have to be prepared for anything: from phone numbers to political caricatures. Pedro Neves explains that the great variety of content in latrinalia “is related to the intimacy of the function of the bathroom and the fact that it’s associated with physiological needs”. So, because it’s a kind of “communication from people who are giving vent to other people who will go through the same kind of process”, it ends up being “very focused on physiological needs, which can have more repugnant or sensual aspects, related to genitals”. So it makes some sense that a great part of latrinalia content is related to sexuality, in a more rough or delicate way, because, deep down, the bathroom is exactly to provide a moment of privacy for that bodily function. “This space of intimate communication from someone who writes with their genitals in hand to another with their genitals in hand is indeed something very deep”, admits the investigator. Even if indirectly, the relationship established between who writes and who reads a sentence on the door is something truly intimate - even if this is all done anonymously on both ends. Raise a hand those who have never imagined what the author was doing in the moment they left their mark in a public bathroom.

At first sight, these kinds of interactions seem empty of any meaning, even just considered vandalism with no value. But the truth is that latrinalia has captured the attention of those who study urban art and even those whose job is to use communication for other purposes. Maybe you’ve come across, mainly in bars, signs - whether they’re publicity or just for fun - strategically placed above or directly in front of the toilet. Pedro Neves explains that “latrinalia itself has created the kind of communication that happens in bathrooms and that space has been captured by non artistic communication”. Actually, even though this expression happens naturally and spontaneously, it seems like we are before its intentional creation. According to the investigator, “there’s an urban art museum in Berlin that, at its own opening, the bathroom was already filled with content of that nature - stickers, scribbles, tags”. In the same way some anticipate the creative process, some prefer to believe that latrinalia in public spaces is avoidable - it’s not. Pedro Neves explains that “it makes no sense to design a public restroom at an airport or bar and expect the walls to be spotless, because they won’t be”. In any public WC, especially when we refer to places where a lot of people pass through, “it’s a matter of time until there’s communication spontaneously developing in that space”.

It’s undeniable how unusual this dissertation seems to be - some doodles made by some stranger in a theater or restaurant bathroom shouldn’t be art, some may say. But, deep down they are, as long as they’re seen and understood as such. And, let’s be honest, there is something deeply intimate in the share of any thought that comes to mind in our most vulnerable moments, even if they are in the bathroom.