Not as scary as Gollum, from The Lord of the Rings, but with the same insatiable passion, Reverso One Precious Flowers watches are so precious that grabbing one of the 40 specimens has just made it into our top ten priorities. 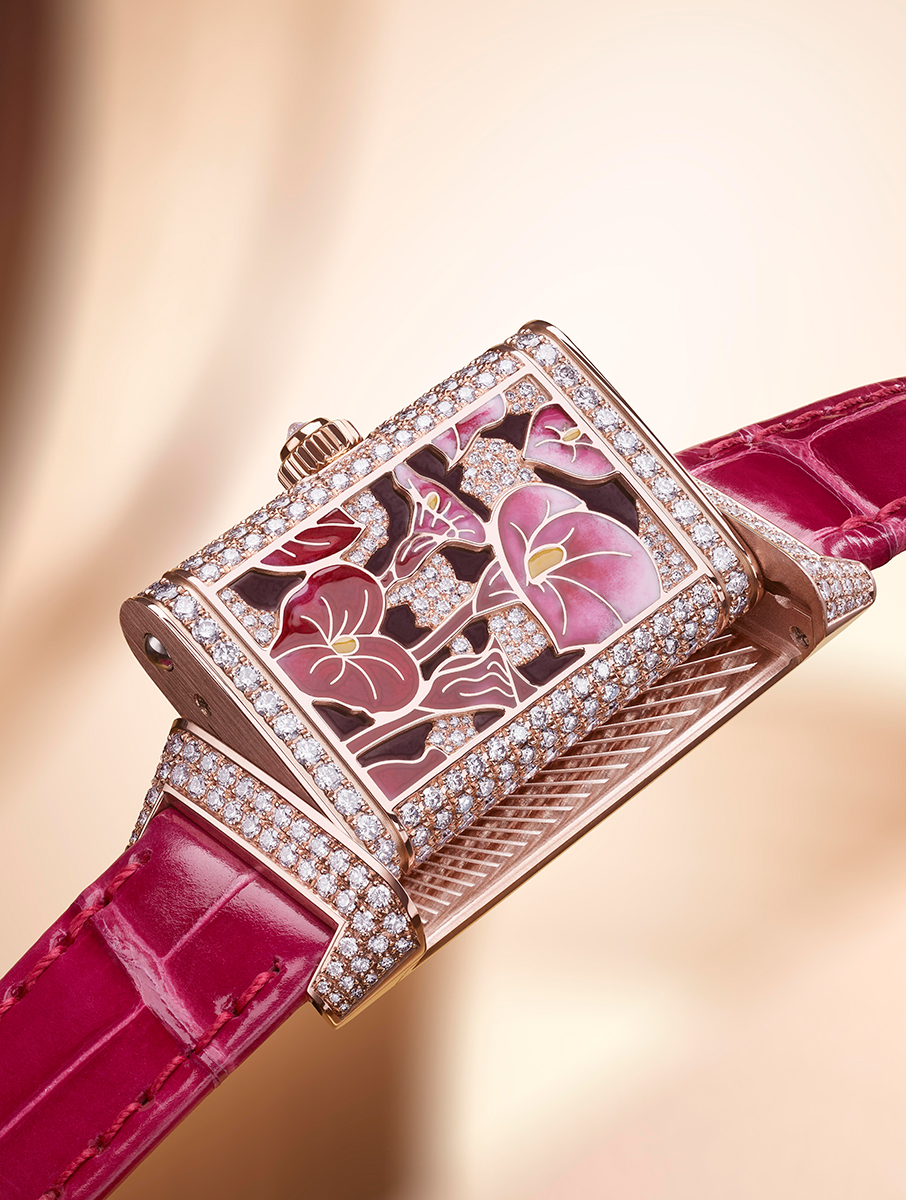 It is right to say that we did not even know that we needed it until we put our eyes on it. And, at this point, the reader must be asking: “Why?” We go on to explain: when the codes of Haute Horlogerie are combined with artisanal crafts (which involve the work of enameling, engraving and crimping) and High Jewelery, the result could only be a true object of desire, one of those we buy today and wear forever. Jaeger-LeCoultre, who does everything with intention, introduced a new member in the Reverso family, Reverso One Precious Flowers, which comes in four exclusive versions with floral motifs, which celebrate the poetry of flowers. “We were inspired by the nécessaires of the 20s / 30s with floral patterns, engravings and precious stones. The inspiration comes, above all, from the floral universe and the techniques used in these pochettes”, confides in Lionel Favre, director of product design. “The designers chose the lilies and the jars, since they were the flowers used during the art nouveau and art deco period. They have a meaning and a poetic symbology. The pink jars: admiration and appreciation. White lilies: purity and honor. The blue jars: grace and refinement. And the violet jars: passion and charm.”

In an issue entirely dedicated to pink, it is clear that as soon as we came across the Reverso One Precious Flowers brushed with the color pink, we wanted to know more about its creation. And here's what we discovered: the pink jars, which symbolize admiration and recognition, complement the warm tones of the rose gold case. These enameled flowers with nuances in pink gradient, the foliage entirely studded with diamonds, offer a well-marked contrast with the black lacquered background. And just this brief description has already made us pick up our wallet. Both the pink version and the rest have an elongated case and all leather bracelets are colorful and shiny, a materialization of feminine elegance. Taking into account the mastery of the watchmaking technique, the maison did not hesitate with regard to movement, and all Reverso One Precious Flowers were equipped with the Jaeger-LeCoultre Caliber 846 with manual winding, a movement specially developed for Reverso. Okay, we are ready to leave the house. And if all this seems exclusive, believe it because it is: in the world there are only 40 copies, ten for each version. “We are very proud of our own Métiers Rares artisans who are able to reproduce pieces of art on such small surfaces on the dials or on the back of our watches,” Favre tells us. “We highlight their savoir-faire as much as we can in our high-end pieces and we want our customers to understand the dexterity and hours of work behind such exceptional pieces.” It is now that we go out the door looking for one of those (rare) specimens.

In 2021, Reverso completes its 90th anniversary and, over the past nine decades, not even for a second did its place at the top collapse. “For nine decades, Reverso has continuously reinvented itself without ever compromising its identity: it housed more than 50 different gauges, while its reverse side of white metal became a canvas for creative expression, decorated with enamel, engravings or precious stones,”says the product design director. "We hope that Reverso continues to symbolize the spirit of modernity that inspired its creation, now and another 90 years on." That’s what Lionel Favre hopes and we all do, because there may be many watches, but few are able to capture our attention. And when that happens, if necessary, we turn into Gollum until we have one of the models on our wrist.