Dr. Biscaia Fraga has been tracing angles and frames for the past 30 years to achieve the culmination of symmetry. 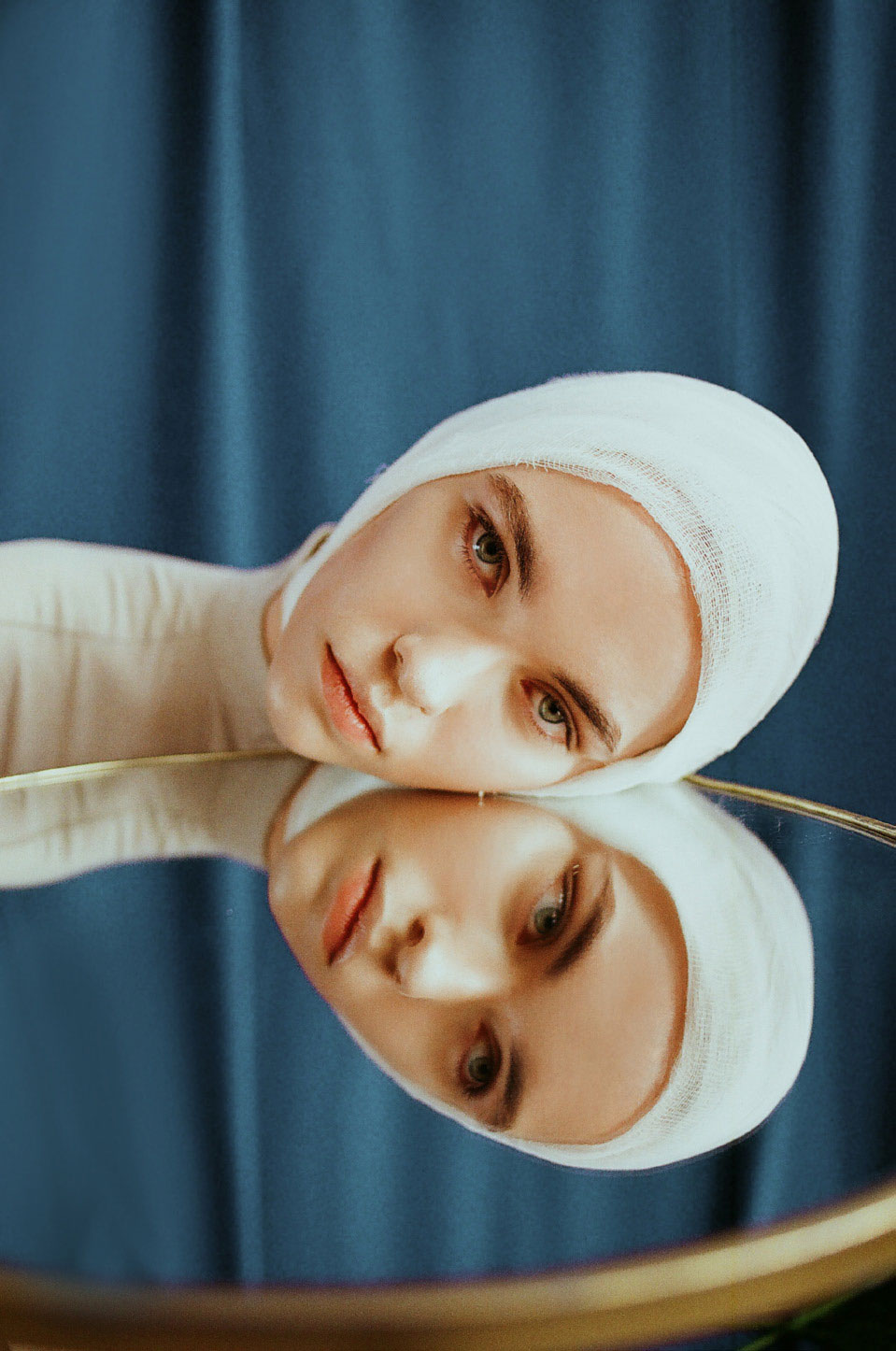 “People's relationship with surgery has changed very much. Nowadays, cosmetic surgery is highly democratized. At the time, 30 years ago, surgery was only for an elite, a very restricted nucleus, and there was still a big taboo, something that nowadays does not exist". In an issue about mirrors, it would be more than appropriate to sit with Biscaia Fraga, doctor, and specialist in plastic, aesthetic, and reconstructive surgery, in his mirror room - which is a way to name the office where he receives patients and sits them in front of a mirror that takes up the entire the wall to talk about the image you are trying to achieve. But first, let’s go back in history. Zeferino Biscaia Fraga, born in Manteigas, Guarda district, graduated from medical school in 1973, against his father's will, since he envisioned for the fifth of his six children, all men, a future as a lawyer. “I am a doctor against my family's will. It seems absurd nowadays, doesn't it? I lived in a patriarchal family regime in which the patriarch was the powerful lord who decided everything that happened inside and outside the house, and even determined the future of the children. I was the fifth and I had to follow his desire for me to be a lawyer. But I told him I was not going to do that - and he wasn't used to someone saying no to him. And it was very dramatic, this happened 400 kilometers away from Lisbon, in the interior of the country... It was not easy ”, confesses the surgeon. Among the reasons that led Zeferino’s father to think he did not have the conditions to be was the fact that he was not the son of a doctor and, therefore, wouldn’t have patients to inherit, and the fact that the medical school was the most expensive at the time, especially for someone who already had four children going to college. “I was very lucky because at the time an Education Minister called Veiga Simão established that students who had high grades and were selected by the board could be paid assistants. And since I had an excellent grade in Anatomy in my first year of school, the teacher came to talk to me and I became the first paid assistant of that department... And just to paint the picture: my parent patriarch gave me 600 escudos [the currency at that time] and I paid 350 for my room. Then I started to receive 2600 escudos. I became completely independent” he says. As an assistant, he taught classes to younger students who were studying medicine, but in the third year, there was an opening for an internship at the Oncology Institute, where they did the big amputations. It was there that he began to study cases that would show him the way to cosmetic surgery since one of his tasks as an intern was to write the clinical history of the patients. “When I did the clinical stories, I was impressed with the way those girls sometimes very young, at 20, 30 years old, had their breasts removed. He thought about their social, family, and emotional problems ... And there was no reconstructive surgery being done at the time. That's when the idea came to me and I decided that once I finished my degree I would pursue reconstructive surgery. So I started as a reconstructive surgeon and then, later, I got to the aesthetic surgery”, he tells us.

He has been in the world of plastic surgery for a few decades and already has witnessed trends and that go in and out of fashion. “It is an abysmal difference, 25 years ago I made four times more breast reductions than breast augmentation surgeries. Now it's just the opposite: I do four, five times more augmentations than reductions. And this has to do with the trends, of course” he says. Times change, taste changes, and the references that patients bring to the office also change. “25 years ago, for example, the beauty goals were Brigitte Bardot's lips [because of the central part of the lip, the cupid’s bow], Sophia Loren... They were the beauty pattern to follow. Not anymore. Here in Portugal we now have Júlia Palha, some American actresses”, he reveals. “For women, the cause [that leads them to the office] is, fundamentally, age. In statistical terms, the most sought after surgeries continue to be body reshaping through liposculpture, breast augmentation, and facial rejuvenation. Men look for three things: hair because there are about two and a half million men with getting bald; the abdomen, which increases around 30, 40 years of age; and genital augmentation”. Along with the evolution of trends, Biscaia Fraga mentions also the great technological and scientific evolution “in both the reconstructive and aesthetic fields ”. The surgeon explains: “At the aesthetic field, for example, there was the appearance of the laser, which was very important in the beauty world, and the appearance of the procedure where we prepare the plasma. Nowadays, plastic surgery is much less evasive on all terms. Whether in terms of physical trauma, surgical trauma, or anesthetic aggression. And why? Because the vast majority of cosmetic surgery - here in our clinic it reaches 95% of the procedures - is an outpatient treatment. The patient is operated with local or regional anesthesia and moderate sedation and after two to five hours, he leaves. This was totally unthinkable 20 years ago. In the past, liposuction required general anesthesia and hospitalization. Nowadays, even the most extensive liposuction is done on an outpatient basis and hospitalization is only for large breast reductions, major abdominoplasties in which it is necessary to make a great intervention ... It was an impressive revolution impressive". The surgeon then grabs a folder filled with photographs where he documents his cases and keeps, for reference, images of before and after surgery. He opens it in a section and points out: “For example, this lady here smoked three packs of cigarettes a day for 30 years. Her skin looked almost smoked. With her own tissues, we made an entire outline of her face and. This used to be done with silicone prostheses. Nowadays the tissue is centrifuged and the plasma is applied. I am a great advocate for this technique because it revitalizes: the person gets better quality skin and can we can reshape what in the past, had to be done with a prosthesis. The rejuvenation we do now is more natural, but there are still people who are shocked when they came here and I don’t propose a facelift. But the quality of the skin sometimes allows these pro-aging interventions, application of plasma and multivitamin complexes that give results of shiny, smoother, more harmonious skin”. In fact, the results the doctor pointed out are impressive. Speaking of trends, the specialist concludes: “In terms of predictions, I think what will be in fashion is the revitalization of the tissues and skin. To take advantage of the plasma to revitalize."

The trends also undergo mutations, changing according to times and states of the world. And even in surgery, lockdown and the use of protective masks changed the order of things regarding aesthetic interventions. To Vogue, Dr. Biscaia Fraga confides that patients who complain about weight tell him they have increased six to eight kilos as a consequence of lockdown - which brought together stress, physical inactivity, closed gyms, and concerns that overlapped self-care. "And with that comes liposculpture or liposuction ”, says the surgeon. Using masks, contrary to what we may think, did not translate to a search for adjustments in the eye area, which is what the mask leaves uncovered. On the contrary, "people have taken advantage of the use of the mask to go for the rejuvenation of the mouth and the face - because they can hide it. We have done many face rejuvenation procedures precisely because of the use of the mask. Some people don't like others to know, but there is also a significant number that couldn’t care less and even keeps going to work. Today we can easily hide a bruise with makeup but even so, there are people who have to work, whether it is remotely or in person and they prefer not to have to explain what procedures they were getting done. Therefore, people have been taking advantage of this to have work done on the middle and lower part of the face” he reveals. But in a conversation that went on for almost an hour and that was spent in front of the mirror, it becomes hard not to mention the dark side of cosmetic surgery, the one in which the mirror is the evil ally. Although the percentage is small, some people visit this office with misconceptions about their reflection. “Fortunately, the vast majority of patients know what they want, have read all about it, and come here to ask a few questions and get to know the details. But then there is a small percentage of people whose body image does not match the reality. That is, they have completely misplaced expectations and never reach the concept of perfection he is looking for. And that is why the first consultation is very important, to understand very well what the person wants. For example, a 19-year-old girl sat here and said 'I want to get my pharmacist’s breasts '. And she showed up with the pharmacist after a few weeks and she had an immensely large chest, what we call mammary gigantism. I explained that if she pushed the skin, it could start streaking and the elastic fibers would burst. And I had to tell her I wasn’t doing this surgery. I wouldn’t do it because I would be creating an anomaly. My role as a doctor and plastic surgeon is to create harmony. And in this case, it took two months of negotiation and dialogue, to reach a point of balance - which for me was already too big of a chest but that was what she intended. But in this case, only after I was convinced that she had a stable psychological structure I was comfortable to go forward. Fortunately, there are few cases in which body image does not correspond to reality. But these are the cases that raise the most problems. And I already have refused cases for that reason. Not many, but I have to refuse when I see that there is no emotional balance and psychological stability. And in some cases, I even asked for a psychologist’s perspective, which is something that people don't like because they say 'I came here to see a surgeon not to be called crazy.’ And that's why I have a mirror here, for the person to see herself, for and point out what she thinks isn’t right”, he concludes.