From collaborations to drops, the most wanted (and frequently limited) items in fashion are sold out in a matter of seconds. Hype has become the new exclusive, but is there a future for it? 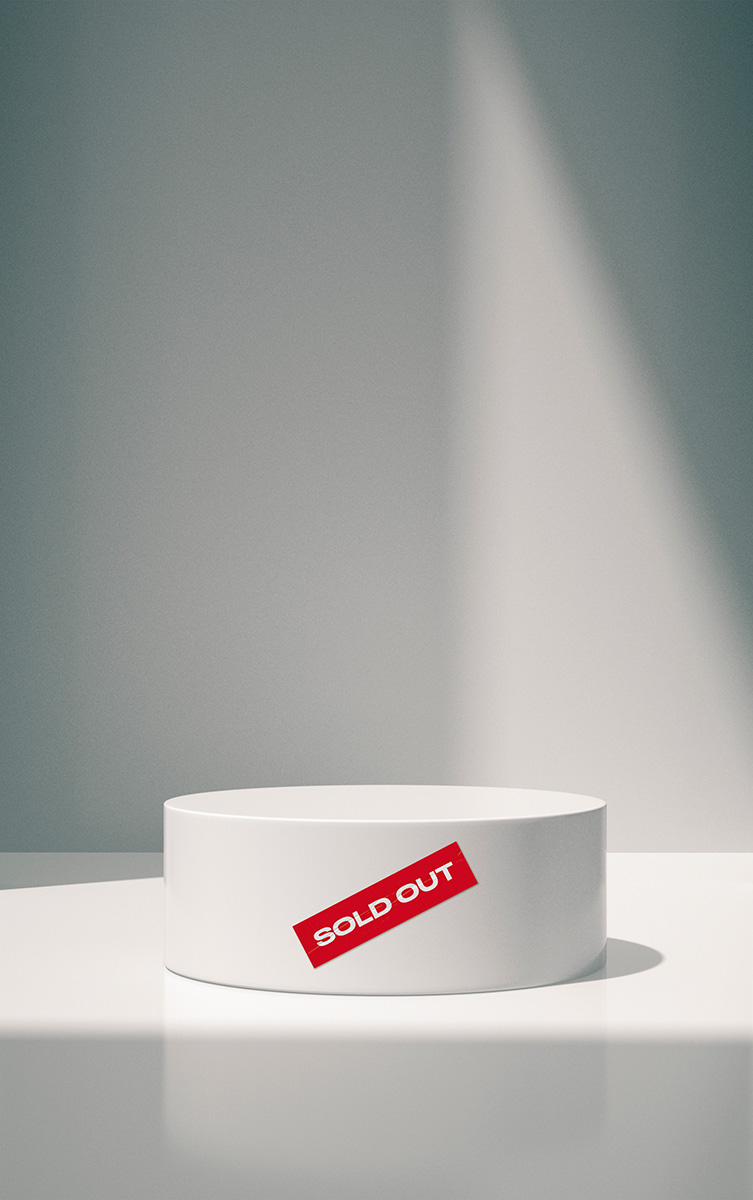 I can count all the crazy things I’ve done in the name of fashion on one hand, and I can say that all of them involved an alarm and a short-lived feeling of “am I really doing this?” The first one I can remember was in 2015, when Olivier Rousteing’s Balmain took over H&M with highlights of the creative director’s first eight seasons, creating what was named as luxe-meets-mass. “Each year H&M announces a new collaboration and each year our inner serial shopper is put to the test. Hysteria and early wake up call for those brave enough to face the queues in front of the H&M stores at the crack of dawn. Pressure and a headache for those who will attempt to shop directly at H&M online before the inevitable crash, which will put an end to your dream of joining the Balmain nation. Perhaps a slight feeling of injustice for those who will attempt to bag a few pieces on e-bay and realize they will have to pay double the price. As you will have understood, shopping the Balmain x H&M collection is a real marathon, and just like a real marathon, you should come prepared” This post taken from what-to-where.com is the perfect summary of what a person is capable of doing to get her hands on a black and green fur coat. My adventure was the second. The website crashed. I had an ally on standby ready to take action if needed. The coat arrived. I vowed to never do something like this again. The hype is not worth it. And then came quarantine. I found myself waking up earlier than usual, with high hopes of buying a pair of Nike’s Chunky Dunky (a reimagination of the SB Dunk Low made in collaboration with Ben & Jerry’s) and copping one of the Cactus Trail (another Nike collaboration, this time around with Travis Scott, for the Air Max 270). There was no luck that could match the speed with which these highly wanted, and equally limited, sneakers get sold out. Buying from resale is also a lost case – when it comes to the insane resale market of hyped sneakers, and depending on the size you’re looking for, buying a pair of Chunky Dunky on StockX means paying something like 1,500 euros. If you visit Farfetch’s website, for example, a pair of the Cactus Trail goes beyond the 1,300 euros mark and can go up to 1,600 euros. The original price of both sneakers? 100 euros and 170 euros, respectively. While the rise of the sneaker has tracked the steady surge of streetwear and "ironic" style in fashion, the resale market for sneakers has boomed. Brands take advantage of the wildfires of social media and collaborations to grow demand for their products. Cynics will scoff at the hot air, but there's no denying that hype is a winning strategy for both brands and resellers alike,” the Business Times reported in January, citing that Investment bank Cowen & Co put the global sneaker resale market at US$2 billion in July 2019, and projected that by 2025, the value of the market could triple to US$6 billion.

The most wanted sneakers may be one of the most preeminent manifestations of thus hype culture – essentially, a “culture” that can be defined by the obsession of finding the next big thing, inciting high levels of excitement and adrenaline – but there is more to the hype than brand new Yeezys, fresh Balenciagas or a pair of Virgil Abloh’s magic touch. “This obsession, something I have had ever since I could tie my own Converse Chuck Taylor All Stars (high tops in salmon pink, natch) is about finding the ultimate ‘thing’ (…) I am a slave to consumerism’s ‘most-wanted lists’ and nothing will stop me from copping that drop,” wrote Jonathan Heaf, chief content officer at British GQ, in the article ‘How Old Is Too Old For The Latest “Hype” Trends?’, published in the Evening Standard in 2019. “A Virgil Abloh ‘remixed’ Ikea ‘Wet Grass’ rug on the resale market for quadruple the RRP? I’ll take two! Loewe x Paula’s Ibiza appliquéd striped cotton terry zip up sweatshirt (£1,000), dry clean only and totally impractical for anywhere other than, well, Ibiza in mid-July? Sold! Pharrell Williams-endorsed Billionaire Boys Club panelled, tufted ‘spaceman’ wool rug (£250) so minuscule as to be no use to anyone except perhaps the family of hedgehogs that lives in my youngest daughter’s Sylvanian Family dolls house? Bingo! Balenciaga track nylon mesh and rubber trainers in shark grey and canary yellow that may make the wearer look like the guy from Free Solo (£575)? Gimme, gimme, gimme!” And he went on, stating that hype is, in fact, “a word that can be affixed to pretty much anything to give it a younger, edgier slant: people nowadays talk about hype brands, hype cars, hype scent, hype merch, the hype effect, there’s even a hype coffee.” Between the hype and the drops – in other words, limited edition merch releases, frequently used by streetwear brands as a marketing strategy –, and as I would later discover during lockdown, hype culture can be a serious force to reckon with. As Instagram was flooded with pictures of influencers wearing sets by Pangaia, t-shirts and logo caps by Sporty & Rich and sweatshirts by Suspicious Antwerp or Museum of Peace & Quiet, my desire of owning this “cool” new sportswear grew stronger by the minute. It’s no secret that Instagram has changed (really changed) the way that we consume – and in the midst of all the chaos, I found myself looking for drop dates, stalking European retailers with the hope of finding when (and if) my size was going to be restoked. Priorities ended up winning and desires where left in the cart. That is, when they made it to the cart. The hype is real. But can we say the same about its future?

Right now, there is no one in the Fashion industry who’s not feeling the negative impacts of the new coronavirus. From creatives to consumers, from luxury groups to independent brands, there is a lingering cloud of uncertainty in the air, asking for some kind of change – and that includes a change in hype culture. Amongst fashion insiders, the coronavirus crisis has also given rise to a lot of soul-searching and prognosticating, ranging from hopeful to preposterous,” wrote Eugene Rabkin in a piece for Highsnobiety, published back in April. “And, in this time of navel-gazing, it becomes fair to ask whether the coronavirus will — among its many casualties, human and corporate — also kill hype culture. Will people lining up in the wee hours of the morning for a Supreme drop or salivating over another meaningless collab realize just how daft it all is? The short answer is: probably not.” He continued, stating that every time a crisis hit humanity, satisfying emotional needs grew in importance. “And that’s where fashion, along with hype culture, comes in — it speaks to human emotion, mostly that of satisfying desire or quenching aspirational thirst,” he wrote. “In my quest to understand why people consume hype, I have yet to see a better theory than one of conspicuous consumption the sociologist Thorstein Veblen offered over 120 years ago. His basic postulate was that people consume in order to signal their status to the rest of society. (...) If all of this is making you sick right now, as you watch humanity’s existential struggle and are wondering at the utter pointlessness of your overflowing, futile closet, don’t worry — this feeling will pass, and you may find yourself salivating at the next Sacai x Nike sneaker sooner than you think. We’ve been here before.”

Even so, there were others that looked at the question with more optimistic lenses. “We need to dismantle fashion’s addiction to hype. It’s easy to point the finger at Instagram or the kids queuing up outside Supreme, but the truth is that it’s an inescapable problem that’s infected the entire industry,” wrote Alec Leach in and i-D piece. “Hype is the relentless cycle of drops, collabs, pop-ups, cruise shows and designer appointments. It’s the idea that everything needs to be viral, shareable, a ‘moment’. It’s newness for the sake of newness, buying for the sake of buying. It never stops: even now, in the midst of a global pandemic, we’re told that this is the time to upgrade our loungewear and perfect our working from home looks.” As the journalist pointed out, “the problem with the hype carousel is that the more people ride it, the faster it spins,” raising questions that go from sustainability to overconsumption. “We need to understand that whether we like it or not, everything we buy has an impact on our lives.” And that’s the filter free truth. Whether we like it or not, each buy is a political act. In a time when consumers are hyper aware of that, and if we look at hype for what it is – a situation where something is promoted and discussed in public spaces, in part to attract someone’s attention – it’s possible that many find themselves channeling what is called hype culture not in a new drop, but rather in a message, a movement. If we question the need for a material next big thing, for something that is new but not necessarily innovative, the attention we give to the hype may possibly be used for something more beneficial than for something with no benefits. If we question the reason behind something being sold out in a matter of seconds, we may find an “uglier” truth than the one we imagine. If we question why we give in to the hype, we may realize that it’s nothing more than a little foolishness. Be it what may be, with no cynicism or ingenuity, hype will always exist. As Eugene Rabkin mentioned in his article, hype has been around since the times of economist and sociologist Thorstein Veblen. Even though the model can be traced back to 1899, in its genesis, it’s the same one we see every time a new drop falls on our laps. Investing in hype is, somehow, investing on something exclusive, limited, hard to find. Even if the price doesn’t reflect it, the feeling is there. In the end, that means that investing in hype is investing on a social status, a kind of image, influential in a kind of culture and community. Be it what may be, with no cynicism or ingenuity, hype will always exist. With the pros and cons on the table, and in a moment where everything can change, we just have to decide: what do we want hype to be?

*Originally published in Vogue Portugal's The Madness Issue, from July 2020.