Let us embark on a blue dream to find characters that make color their characteristic traits, that define them and distinguish them, and that is part of their brand image, if not even of their essence. 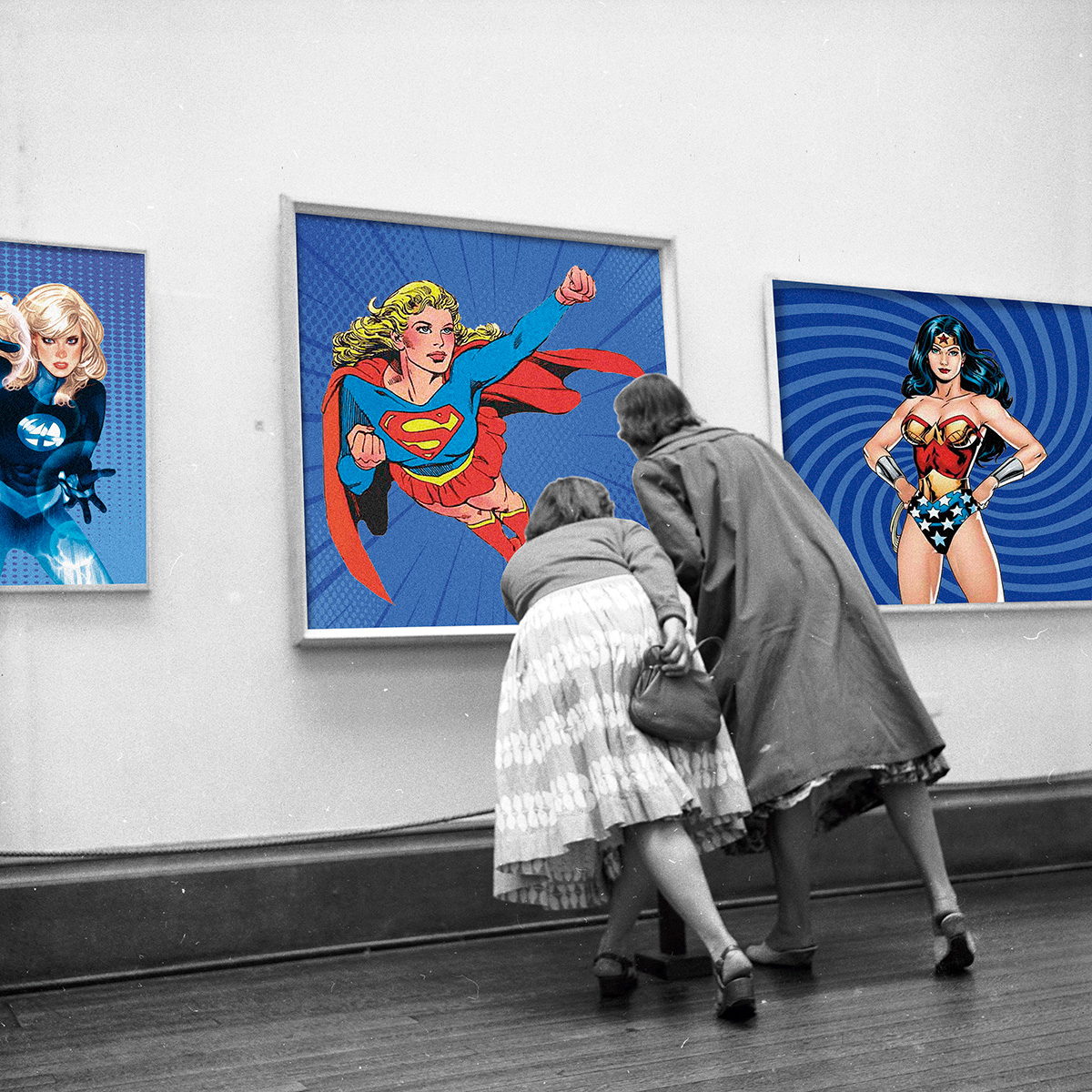 I had never realized how blue the world is. Not the real world, which seems invested in an inexorable journey towards an absolute, irreversible grayness, in such a way that even the metaphor of the Blue Planet, that vision of a fortunate cosmonaut, cannot disguise the colors that paint reality. However, the use of humans to their strongest superpower comes from time immemorial: whenever reality fails them, they turn to fantasy, they lie down to imagine, they let themselves be carried away by fiction (and what’s wrong with fiction if it saves us all?). And it is in this fantastic vision, in this wonderful construction of the imagination drawn on paper and so often transposed to the screens, that blue is revealed as a strong color. The blue universe of comics, that's what we talk about, is vast and there are countless heroes painted in that primary color. Be they blue from birth, configuration or wardrobe, these imaginary friends of ours, so different from each other, have a lot in common.

What blue says
Whoever creates a cartoon character does so by building complexities and resorting to nuances. There are many possible readings, many legitimate interpretations and a lot to look for among the information - sometimes more, sometimes less - explicit in the tables we are faced with. If the artifacts they use, the place they come from or the friends they surround themselves with (or not) help to characterize these characters, the colors they wear or the color of their skin can also help decipher them. To better understand the meaning and depth of blue, I decided to browse the Internet and consult some sites that specialize in reading colors. The “therapeutic properties of the waters” or the “power of the stormy seas” often appear to help define the common concept of blue, or at least to build the commonplace in which the interpretation of this color is so often transformed. The truth is that blue is statistically the color most often chosen by most people as being their favorite. Why so? Apparently, the psychological effect of blue, that is, what it subliminally suggests, is related to tranquility, strength, loyalty and fidelity.

These suggestions and interpretations may vary from person to person, and even from culture to culture, but there is a more or less unanimous aspect: blue refers to something positive, either because it is balsamic or agile. And the reasons are not exclusively psychological: there is, in fact, an effect related to our pituitary gland, what causes it to influence from sleep patterns to metabolism, including body temperature. The fact that blue refers to the sea and the sky makes color associated with calm, as opposed to the passion suggested by warm and emotional colors, such as red. Color is also seen as a symbol of bravery, courage, wisdom, or serenity. It is no coincidence that it is often used, for example, by police forces in various parts of the world. In the negative, blue can refer to the depth of the oceans, to the mysterious and the unknown, or to a stormy character. In other words, even when viewed from a negative perspective, blue is quite positive - it is more or less like those people whose luck has blown and whose worst defect is being "determined" and "sure of themselves."

The nation’s heroes
Let us set aside the skies and the oceans, plus the more or less mystical interpretations of what they mean and suggest, and the hypotheses and metabolisms. Let us focus again on action, fantasy, comics and the colors of superheroes and more normal heroes (and others not even that), which are, after all, what brings us here. And look at the blue that so many of these characters have, and in the most varied ways. According to some pages of the specialty - and using common sense and common knowledge to confirm -, blue is a color often associated with the good, the heroes, the protagonists. On the other hand, very dark blue is, as a rule, a brand of sinister characters, who can be antagonistic villains or simply obscure, possibly toxic characters. The case of Mystique, from the X-Men universe, is a good example of an obscure character. Sometimes villain, sometimes heroin, is untimely and unpredictable - just like the deep oceans and storms on the high seas that I talked about in the previous chapter. In most cases, the interpretation and suggestion of blue corresponds to what the characters embody, although in the case of Mystique we cannot speak of stability or ability.

Spider-Man, Superman, Wonder Woman, Captain America, Captain Planet, or Superwoman are some examples in which blue appears in clothing as the main color. If there is a main color, it is because there is a complementary color. In the cases mentioned, this color is always red. This is a characteristic that cuts across characters and even universes of comics, as the list above includes heroes from both Marvel and rival DC Comics. Apparently, this combination of colors results from an elaborate interpretation, and at the same time so mundane, of what heroes would be at the beginning of the 20th century: circus artists, namely trapeze artists who played risky numbers during the shows. The norm was that they wore blue uniforms with overlapping red elements, whether these boots or elastic shorts. Another more or less obvious explanation for this combination of colors, namely in the Marvel and DC Comics universes, is related to patriotic sentiments: blue and red (and white) are the colors of the flag of the United States of America, so it makes sense for the nation's heroes to dress in a way that automatically connects them with the homeland.

Blue, blue everywhere
A while ago New Musical Express released an article about yellow in cartoons that highlighted The Simpsons and its ostensibly yellow condition. However, even the yellow Simpsons deal with a constant blue presence: in Homer's pants, in Maggie's dress and hair tie, in Bart's shorts and, of course, in Marge's unruly hair. Only Lisa Simpson escapes the blue in the family. The thing is that blue extends throughout BD in such an omnipresent way that it ends up overflowing: even Sesame Street’s Cookie Monster is blue. Why? Perhaps the correct question is "why not?" Everyone in Avatar (2009) is blue, as are Nathan W. Pyle's wonderful extraterrestrials on his Strange Planet, who left behind the green traditionally associated with Mars to present themselves, sophisticated and indefinite, in blue on pink. All the elements of the Fantastic Four are also dressed in blue, although The Thing, which is half man, half rock, cannot wear more than his pants - there are similarities between the thing and the Incredible Hulk that range from physical portent to shape irascible, going through the difficulty of conserving clothes, therefore, it is important that blue does not prevail so that it is properly distinguished from the other, which is green. Watchmen's Doctor Manhattan is a metaphysical blue.

Bob, the Builder, puts the physicist into action always dressed in blue and no less blue is the hedgehog Sonic, born to be a symbol of Sega. Let us not forget the intense and exotic blue bird Blu, from the film Rio (2011). In this dimension that is the fantasy of blue, it is not only the heroes and protagonists who display the color. Sidekicks also reveal themselves: Nemo's Dory, Lilo's Stitch, Jerry's Tom in the original movie, everyone from the Smurfs village (except Gargamel) who are not the main characters, Aladdin's Genius (1992 version), Alice in Wonderland, Sulley de Monsters, Inc.(2001), or the Sadness from Inside Out (2015). As you can see, in the world of cartoons and fantasy, blue is much more than a color, a condition and an affirmation. It would be perfect if Buzz Lightyear was also blue, to end with an emphatic "we could continue to infinity and beyond", but unfortunately even fantasy, even if bluish, sometimes comes up against reality.