Human blood is undeniably red, yet some say it can be blue. There are also those who believe that the truth is an illusion or that certain illusions are true. Blue, that color that has always been evident in nature, has been the subject of some myths, with results that go against common sense. One, scientific, is that our blood may be blue; the other, mythological, is that blue blood is a sign of nobility. In bloody stories, the boundaries of the imagination are vast! 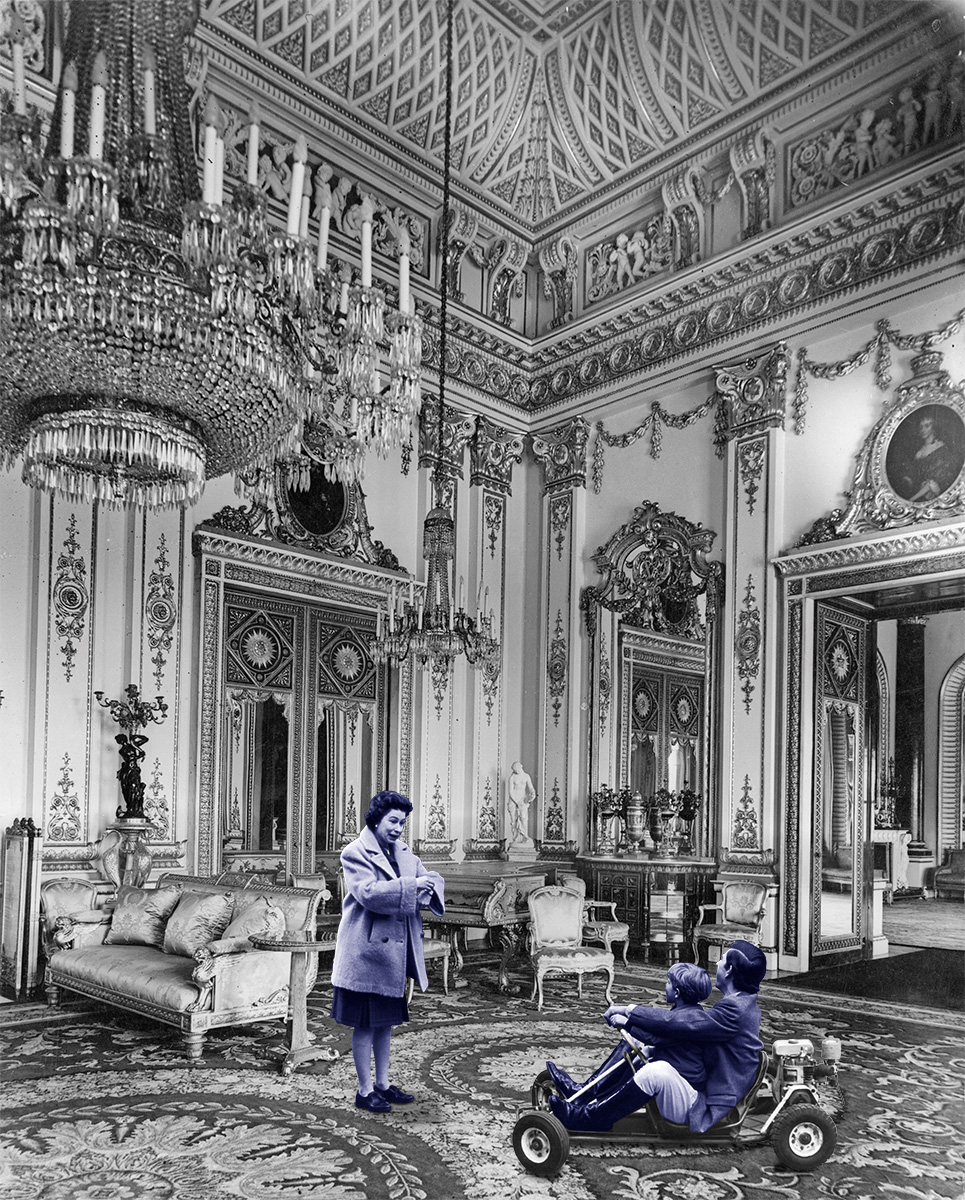 Is there blue blood? Yes, there is, sir. Certain spiders, snails and lobsters - yes, lobsters, so red - have blue blood. But the most unusual is the crab, also known as the Atlantic horseshoe crab. It is a Jurassic creature - unchanged in 500 million years - with the unattractive appearance of a brownish shell from where thorns and a thin, hard tail come out. It has a mouth and tentacles on the bottom, can reach 50 centimeters and lasts between 20 to 40 years. Spawning in the Gulf of Mexico and elsewhere, all over the planet. The Japanese, always original, eat it, as we eat lobsters and snails, and therefore it spent millennia just as another victim of the food chain. For 499,999,944 years, nobody cared about it, until it was discovered in 1964 that his blood could be used to make an endotoxin that cures various diseases caused by bacteria. It is possible to extract its blood without killing it, that is, to bleed it indefinitely. It is in danger of extinction, of course. As far as anyone knows, no one has ever tried to transfuse blood from the lymph to a human, thus giving him noble scrolls, but that's another story ... Our blood, and that of all living beings that have blood, is always red. The reason it looks blue in the visible veins of the body has to do with the fact that the skin reflects the blue wavelength and absorbs red. As anyone who knows the physics of colors knows - and those who don't know, are not missing out - the color that we see on a surface is the color that the surface reflects. A color that the surface absorbs, we are not able to see. So the red blood looks blue in the veins that run through the skin. For a long time, that is, until in scientific medicine, it was thought that oxygenated blood, which ran through the deepest arteries, was red, and that which returned to the heart, without oxygen, turned blue. When a vein was cut, the immediate contact with the oxygen in the air instantly turned it red. But it is nothing like that. Arterial blood is darker and venous blood is brighter, but it is always red. By the way, just to impress friends over dinner, our red comes from ferrous hemoglobin, while the blue of other creatures is from a substance called cuprous hemocyanin. And let’s move on, because there is a fine difference between curious information and boring wisdom.

So where does the idea come from that people from royal and aristocratic families have blue blood? For a start, blue has always been considered a “noble” color, because it was very difficult to obtain artificially. During the centuries of Egyptian civilization and classical cultures, the only sources were a plant, indigo, a stone, lapis lazuli, and a mineral, azurite. They came from the East, in small quantities, and their permanent application on cloth was not easy. The great question of dyeing is how to fix the color, that is, to prevent it from disappearing with light and washing, secrets jealously kept by painters and weavers. Artificial blues were also made, based on filings of copper, sand and potassium, but they were not as lively or luminous as the natural ones. In Europe, from the 11th century onwards, blue comes into fashion as an elegant color, and the French kings adopt the golden fleur de lis on a blue background as a symbol. In France, above all, this color becomes associated with everything that is real - the Musketeers of Louis XII wore blue capes and the guards of Cardinal de Richelieu wore red ones, who doesn't remember the movies? The Church, which was the omnipresent power, on the other hand, had a less clear attitude towards blue. Some popes saw it with appreciation, others thought it was somber. The blue of the sky was seen as light, not as color. The cloak of Nossa Senhora (de Fátima, de Aparecida, do Carmo and da Trindade), although already showing up in pre-Renaissance paintings, would only become a permanent accessory much later. But we digress. This is not where the blue blood concept comes from yet. Nor is it from the Blue Bloods television series, with a mature and patriarchal Tom Seleck, which had ten seasons between 2010 and 2019. Americans do not have an aristocracy, in the European sense, of course. The first white Americans were the Mayflower immigrants in 1620, Puritan commoners, who fled the English blue bloods of King James VI. Certain rich and chic American families are sometimes considered blue-blooded, like the Kennedys, but the term is not widely used and is more linked to money than ancestry. The "blue bloods" of the series are the policemen of New York, so called because of the uniform, a very dark blue, almost black. However, the Reagan family, a Catholic of Irish origin, can be considered an authentic police aristocracy, which takes family and corporate traditions seriously.

The concept of blue blood is born from a much more prosaic observation. It is used in the sense of royalty and aristocracy by English, French and others with scrolls, but, surprisingly, it comes from Spain. It started to be used in the Middle Ages. What happens is that, until the invention of “healthy outdoor life”, a concept derived from the discovery of hygiene in the 19th century, poor people needed to work from sunrise to sunset and had tanned skin. The nobles did not work and the paid ones stayed in their manor, always in the shade. The very white skin was a sign of “pedigree”. Women, then covered with veils, hats and others, did not touch the raw light of the open air, nor the need to expose themselves to the elements. They had very white skin, “alabaster”, where the veins stood out as marks of environmental modesty. Blue veins, of course. The men might even go to inspect their properties, or travel on business, but always dressed from head to toe. It should be remembered that they slept dressed in a kind of coveralls that were tight at the wrists and ankles, to avoid “pestilences” and that, when they woke up, they wore the luxurious clothes over that “pajamas”.

An inherent concept of "blue blood" is that the qualities are transmitted from parents to their children through blood - flaws are not talked about ... "Blood from my blood", "It's in your blood" and other similar expressions show this belief that it was the blue liquid that passed from generation to generation. Today we know that all this is nothing but meaningless nonsense. Blood is not transmitted, each body produces its own; what passes from parents to children is the DNA (short for deoxyribonucleic acid), the molecule of genetic information. Red blood cells do not have DNA and white ones do, but it is not through blood that genetic transmission occurs. If so, when a person received large blood transfusions, they would have the donor's DNA. Many characteristics pass through DNA, such as eye color or physical structure, but, as we know from the practical observation of families that are close to us, transmission is random. Sometimes it's the shape of the feet, sometimes the size of the ears. As for the mental and psychological characteristics, they are equally random. Sometimes they do not show up in children, but do so in grandchildren, or in cousins, or several generations later. Although genetic inheritance is a fact, it is not possible to predict it or change it - for now. Therefore, a social situation based on heredity is basically a convention of power. That is, to believe that the king's son, or the aristocrat, has the same qualities - and flaws - as the father, it is the same thing as believing in Santa Claus, in miracles, in the geocentric theory (that the Earth is the center of the universe), or in eternal life. A question of faith, worthy of respect, but no scientific basis.

In fact, the proposal for genetic heredity was (instead) an excuse to accept material heredity, privileges and assets. The duke's son was entitled to be a duke because he was a new copy of his father; the banker's son inherited his fortune because he had the same blood. Other reasons were used, and still are, but they have nothing to do with this "blood" issue. We all know the bad result of these myths and conventions: geniuses that generate idiots, good people who have twisted descendants, incompetents raised to important positions, intelligences destined for manual labor. In more petty terms, it was said that the mixture between blue and plebeian blood fueled the beautiful qualities attributed to the aristocracy. This concept led to a world of injustices and barbarities: bastard children were hidden, banned, even murdered. Powerful families needed to maintain their power at all costs, not to mix with the disadvantaged. And they wanted to marry only among themselves, to add goods and perquisites. Very material needs were justified with pseudoscience. In exceptional, historically known cases, red bloods rose in life and became blue. For their intelligence, because they sized opportunities, service provided to the so-called “blue bloods” who had no merit of their own. New wealthy for one generation, turned to established powers in the next generation. One example, among thousands: the Marquis of Pombal. A biography, just published, is called From Almost Nothing to Almost King. The title says it all. In the 19th century, the poor immigrants who made a fortune in Brazil, returned, paid the king's favors and were noble. The old aristocrats despised them, forgetting that their grandparents too had changed the color of their blood by some merit. In the UK, aristocracy on merit is ascended, a way to create fresh blue blood and maintain the myth. Every year, until today, there are new nobitals, some even from foreign origins.

The idea of ​​better and worse bloods is yet another variant of racism. Just as in a tribe there are finer families and less so, there are also upper and lower tribes. The determining factor is the color of the skin, because it is more evident, but the concept of blood is underlying. People from different tribes, “mestizos”, are ostracized, despised. The idea that blood is decisive persists today and will probably never disappear. Of course, in civilizational terms, we have come a long way from the Middle Ages to the 19th century. The Modern Age, which began in the 18th century with the ideas of the philosophers that led to the United States Constitution (1776) and the French Revolution (1789), completely changed the concept of hereditary power and, in part, the transmission of material goods. Blue blood lost its prestige and, in some cases, became anathema. History is much more complicated, certainly. There were, and there still are, advances and setbacks, compensations and injustices. Blue blood continues to be valid in many societies, and in others different colors of blood have been invented, perhaps even more unjust, prejudiced and segregating. The nobility of blood blue is a myth, but the selfishness of red blood is a fact. Now, if it weren’t for the myths, how could we justify realities? Since science is always evolving, we can very well believe that in the future there will be an ethical and compassionate blood. The color will be invented by scientists, the status on the mundane scale by sociologists; the name it’s the designers’ choice.