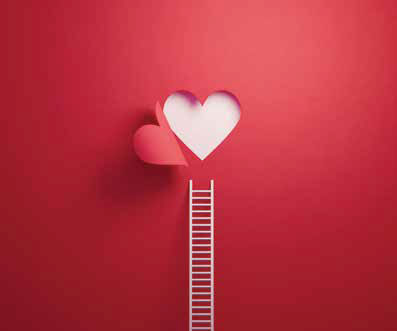 Love in 3D
Love is… continuously giving new experiences that go beyond paper. In previous issues, we drew a new dimension - and interaction - to our covers. This one is not an exception. To get access, just download the Lighthouse Publishing AR app for free, via the QR Code, point to this cover photographed by Jamie Nelson and watch it come to life. Because love is also creating new experiences for our readers.

Did you know that…
Falling in love is similar to the feeling of being high on drugs? According to a published study in The Journal of Sexual Medicine, being in love, like an addiction, awakens the release of “happy” hormones like dopamine, oxytocin and adrenaline, generating a feeling of a natural high. “Love can also be a very strong addiction when things are going well”, said Helen E. Fisher, an anthropologist, in a TED Talk, since the hormones released by the brain when you fall in love are such that generate a kind of addiction. Fun facts only to make this disclaimer: this issue may be addictive. Proceed at your own risk.

Love in times of Covid, part II
To begin a December issue with a second outbreak of the new coronavirus in full swing, in Portugal and in the world, means a sort of sequel to the quarantine that was felt particularly in the edition of Freedom on Hold. Confinement in countries where many of the teams we work with, and restrictions on movements across borders, meant that many of the plans that we had for this magazine had to be readjusted. Some stories couldn't be followed through, some articles have been added righ as we were finishing up the magazine. Still, the effort was worth it: the end result is a high quality issue, as usual, made with blood, sweat and tears, but also with a lot - a LOT - of love and affection.

Spread the love
We were already sharing the love before dedicating a whole issue to it. In past magazines - you maybe even have them at home, love has been a common theme in many articles and, though there was a lack of physical space on these pages, there is always more room in the heart - and in your readings - for more love.