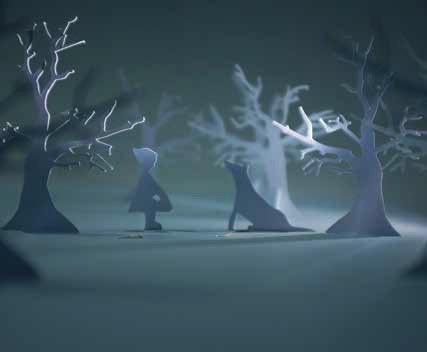 Elementary, my dear Watson
Not so much: no one would find elementary to do an interview with one of the most iconic photographers in the world and, within a moment of conversation, end up with a Fashion story by said photographer, perfect for the issue at hand. But that's what happened: when we sat down to chat with Albert Watson and the theme of fairy tales came up in the dialogue, Watson revealed that he had made a personal fashion spread never before published in magazines, between 2017 and 2018, inspired by Shakespeare's Midsummer Night's Dream, and that fit the magazine like a glove. We don't know which fairy godmother managed to arrange for this spell, but the result ican be seen and read in Rumpelstiltskin, on page 284.

Fairy tale office
There is also a fairytale component here in our newsroom. Here an there and everywhere, there are nooks punctuated by the occasional figurine, collectible, paintings or dolls with some reference to enchanted worlds or childhood memories, albeit with a hint of adult sophistication. From Yoda to Pinocchio, from rockets to winged figures, the element of fantasy is central to creativity, we are the first ones to underline i - and so do our shelves.

We are magic
Princesses are overrated, what the world needs is more fairy godmothers - and we don't need stories to become one: there are endless organizations and charities that need help to make dreams come true and change lives, and it takes no magical intervention to make it happen. All you have to do is help with what you can. Being the fairy godmother who makes a difference is just a decision away: the decision to contribute to one or more solidarities of your choice.

…the iconic expression “Once upon a time” dates from the 14th century, back to Geoffrey Chaucer, but the term fairy tale only appeared in the 17th century?
…the oldest version of the Cinderella story appears in a Chinese book dated circa 850? The oldest European version was published in Italy in 1634, later popularized by Charles Perrault in 1697 with Cinderella, Or The Tale Of The Glass Slipper.
…the evil stepmothers in Hansel and Gretel and Snow White were the birth mothers in the original stories? It was later modified to maintain maternal sanctity.
…the older version of Goldilocks and the Three Bears spoke of a very foul mouth older woman instead of a blonde girl? Also, the bears were three males and later became mother, father and son.
…fairy tales were originally written by adults for adults, and they only took on more childish contours in the 19th century, with the publication of the collection from the Brothers Grimm, in 1812? They were also very violent - even in Jacob and Wilhelm's versions for the younger ones, the Brothers say that Snow White's jealous mother plans to cook and eat her lungs and liver, and Charles Perrault, in Little Red Riding Hood, includes the main character as the wolf's meal, not just the grandmother.
…it is said that the story of Beauty and the Beast was originally intended to soften the idea of ​​arranged marriages, especially if the groom was not pleasant to look at?
…in 2012, The Guardian ran an ad inspired by the story of The Three Little Pigs as if it were current news? The advertisement revealed that the piggies had wrongly accused the asthmatic wolf of tearing down the house, because they were actually trying to defraud the insurance.