We’d risk saying that writing about beauty is mandatorily writing about creativity (and vice versa). Perhaps the first common touchpoint of these two universes is their infinitude of possibilities, the idea that the limits and labels we so quickly impose on everything around us aren’t compatible with that attempt of definition. The concept of appearance, of well-being from inside out, is nothing but a means to an end – the one of personal, collective and artistical elevation – and is as encompassing as the reach of one’s individuality. 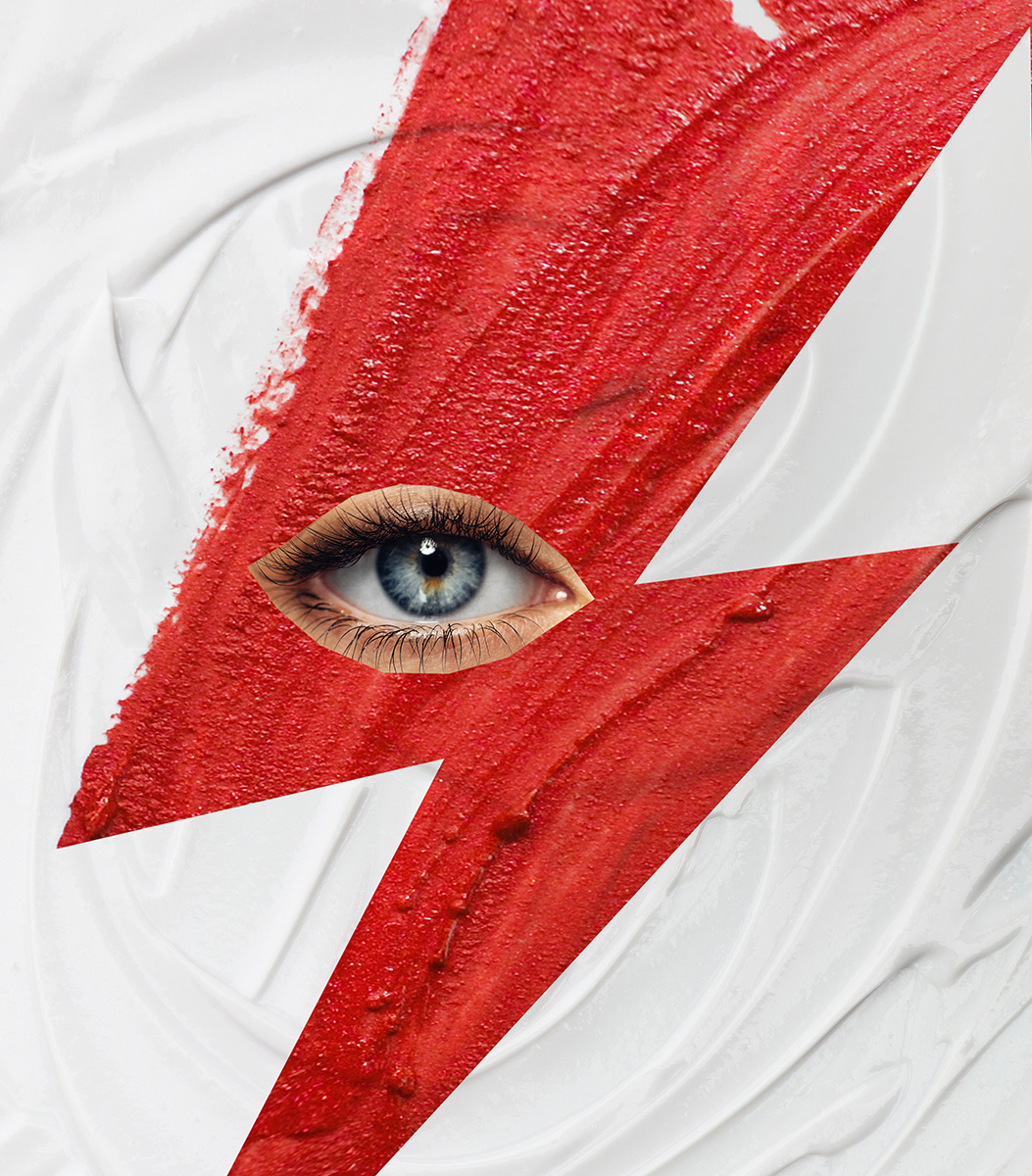 He will forever be remembered as “The Man Who Fell To Earth”. And that affirmation, not hyperbolic in the slightest, is filled with relevancy – were that not the name of one of the movies he starred in in 1976. Hence why it makes perfect sense to start with Bowie, David Bowie, when talking of that tireless search for absolute freedom: of expression, of thought, creation and discovery. Born in 1947 in Brixton, London (United Kingdom), David Robert Jones demonstrated, throughout his entire career, he was the master of a sixth sense, a non-corruptible clarity that shed light on everything around him – as an artist, but mostly, as an individual. His place in history as one of the most influential personalities of all time is carved on a road of reinvention every step of the way – he studied art, music, and design, participated in many productions as an actor, defined the glam rock musical genre as we know it today, and left behind a legacy across fashion, culture and gender issues that transcends generations. And in 69 years on this earth, he proved that immortality is possible to be achieved. Ziggy Stardust, the alter-ego David created at the beginning of the 70s, took us to Mars, opening up the gates into a universe where the only limit is creativity, and where beauty rules as a perspective instead of part of the criteria. For most of his life, Bowie was the target of a level of scrutiny that characterizes celebrity culture as we know it today. In parallel with the admiration of those that recognized in his music the value of something new, different, special, others downplayed his success merely to the visual shock of his appearance, as if it could ever be something that empty. In fact, the way he chose to dress and do his makeup contributed just as much (or even more) to his success and projection as his music did, because it was through those undeniably big-small gestures that he mapped out a new territory of expression that transcended what until then crowds regarded as “expectable” – of a rock star, of manhood itself, of the boxes we tick as F or M.

Bowie’s very own physical appearance added to the myth we now call androgyny, a concept of fluidity where one same person expresses both feminine and masculine characteristics, creating an ambiguous form: his heterochromia (the product of a fight that left his left eye permanently damaged, and whose dilated pupil granted it a darker tone, contrasting with the natural blue color of his eyes), his slim figure, his angular features, all were “prime materials” the singer knew how to explore – and expand – as few others did. He realized that, besides fashion, makeup also gave him the power to find the truest version of himself. Keyword: expression. The glitter, the metallic eyeshadows, the blusher shade fuchsia with which he carved the first steps of the infamous contour technique, the shag haircut (we now worship as a trend), the pink and ginger highlights, the unmissable lightning bolt across the eye…. Small steps for Bowie, but huge, giant leaps to the artistic and individual forms of expression that millions craved as a way to own their identity. As Thomas Newton in the aforementioned motion picture, the artist once said: “Oh I’m just visiting”. And if among us the feeling that he left us too soon still lingers, his mark was so deep and indelible, that even if “just visiting”, nothing would ever be the same since. The world of beauty was profoundly changed by the mirage of Bowie’s influence, and in our humble opinion, it was definitely for the better.

It's important to reiterate how the narrative between beauty, creativity and gender, with all its limitations, and despite them, could never be reduced to one single example, decade or trend. The topic’s ancestry makes it evident that the purge of definitions we observe today is a result of the search for a sense of normality that had been kept under wraps, confined to the corners of society, away from the furtive looks of those who didn’t understand it. This reality, we innocently enjoy thinking of as completely outdated, demands agility, a fierce adaptation in order to change the status quo – in other words, it demands creativity. In this context, the role of beauty is nothing but crucial: with its arsenal of brushes and pigments, the promised land of a borderless individuality becomes accessible, substantial, allowing for the celebration of communities that fight for freedom and that have become real ecosystems, as it is the case for drag culture. Given that these are not subjects upon which many limits apply, let’s start by trying to understand the terminology employed in the next few paragraphs. According to the National Center for Transgender Equality, drag can be defined as a form of entertainment where the people involved perform in highly styled ways. Typically, and historically, men dress and put on makeup to mimic and, at times, exaggerate the feminine gender indicators, whom we call drag queens. However, following the absence of impositions that characterize this art form, and especially considering gender norms, women also have their place in drag, called drag kings, whose interpretation of the male gender indicators is equally accepted. We could say that this apparently small detail resumes the essence of what would be an attempt to define the concept of freedom of expression where beauty takes on a paramount role – one that allows for a physical metamorphosis that accompanies the interior transformation.

“We’re all born naked, the rest is drag”. Famous words by the queen of drag herself, RuPaul Andre Charles. Through a broad career as a supermodel, actor and television star, the North American became one of the most important symbols of what we understand today as drag culture, whose influence peaked in the reality show RuPaul’s Drag Race, where the entire process that goes into this collective and individual form of expression is celebrated with a competition for the Drag Queen Superstar title. The show became one of the biggest, most relevant television phenomena when it comes to the communication and comprehension of drag culture’s values, putting beauty even more at the epicenter of this individual transcendency. Let’s not forget drag is based, above all, on the art of entertainment, and therefore, elevates beauty and makeup for their power to determine the success or failure of this reincarnation, which requires the utmost dedication. We could be once again tempted to assume none of this has any impact on our personal sphere, given that we (for the grand majority, let’s say, as a safeguard) don’t spend hours on end sitting at our vanity trying to build a new persona, and because of that, the relevancy of the topic is reduced to mere curiosity. In this case, to assume would be wrong, since so many (lots, really) trends and rituals we keep as integral parts of our favorite beauty routines came from these queens’ tenacity, though their influence is, too many times, wrongfully overlooked. Have you ever heard of baking? That one trend that swept the beauty world off its feet a couple of years back, which involved setting concealer and foundation to create a general illusion of shadow and light that redefines the face, all due to translucent powder? And what about the incredibly famous contour, one of the most talked-about techniques of manipulation of the bone structure of the face, making noses thinner, cheekbones higher, and foreheads shorter, all with the touch of a brush? Cut creases, ombre eyebrows, fake lashes, the overboard consumption of highlighter, the concept of beat face… The list goes on, so many were the developments and skills brought to the masses by drag. And all of this thanks to the courage of a group of people that were not afraid to pick up their brushes and fight against the old oppression that dictated we shouldn’t be more than what our bodies might have determined – it’s not by chance that we call them queens and kings.

In 2021, absorbed by influencer culture and so incredibly spoiled to think we have seen and done it all, we could perhaps be tempted to believe that using beauty, makeup, the way we present ourselves to the world, as tools to break gender norms, is something completely radical and new, for which our generation can collect all the credit for. Once again, we’d be mistaken, for the same (somewhat concerning) reasons that lead us to recognize more easily Kanye West than Paul McCartney on the cover of an album. What we’re witnessing today, is a growing mediatic focus on the topic which promotes overture to dialogue, granting it importance, at least part of what it deserves. As in any attempt to shift social perspectives, this is a battle filled with silent heroes, so often forgotten, but whose impact manifests every time someone is inspired by their bravery. The freedom we enjoy today, to our own extent, is built upon a fight against the right to unlimited expression that is not yet won – but if creativity is the battlefield, then beauty is the armor, the war paint that unites us, uplifts our moral and shoes the world that being true to who we are will always be worth it… And all this without saying a single word.