English version | A Park for the world

It’s one of the eight finalists of the prestigious World Architecture News Awards, in the landscape architecture category. And it is signed by a Portuguese studio: Topiaris. 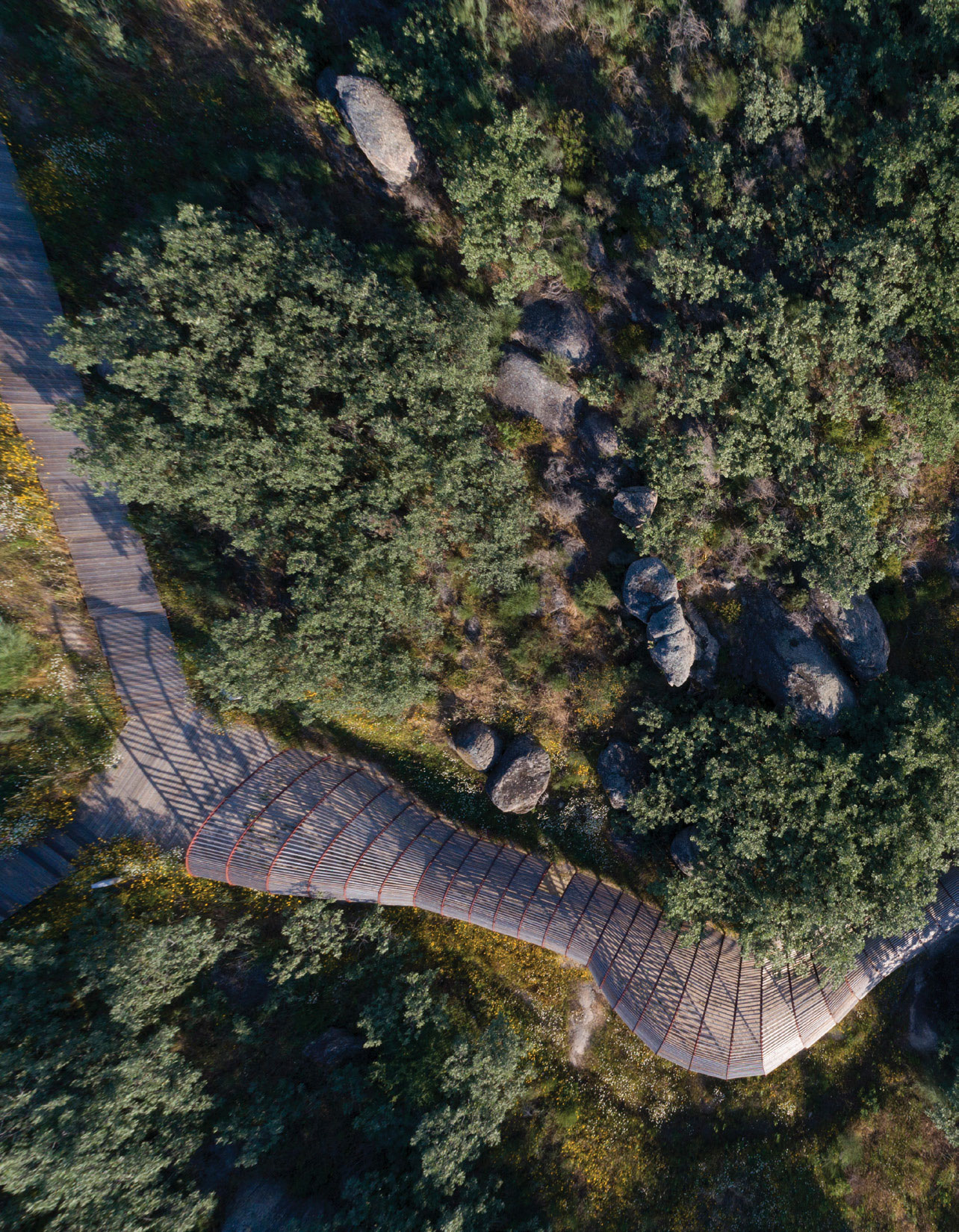 “The Parque do Barrocal project started in 2016, following the Topiaris atelier having won the contest launched by the Castelo Branco City Council with the objective of building a recreational and leisure unit in the Barrocal and, simultaneously, nature conservation." This is how the monograph, where the phenomenal and impressive history of this unique enterprise is presented, begins. Here nothing has been left to chance. As mentioned by two of the architects involved, Catarina Viana and Teresa Barão, to intervene in 40 hectares of such a unique landscape, integrated in classified territories of the UNESCO Naturtejo Geopark and the Tejo Transboundary Biosphere Reserve | Tajo Internacional, a kind of “island of nature between anthropomorphic spaces, the Urbe and the Arge, which are linked to singular and collective memories of its inhabitants”, was one of the atelier's greatest challenges ever. A challenge that was worth it, since it is in the shortlist of the biggest international architecture award, World Achievement News Awards - WAN Awards - in the Urban Landscapes category. The winners will be announced in November, in a ceremony that, given the current situation, will take place in a digital version. But getting here is already a triumph that few can boast about - although Topiaris has already collected, in 2016, this same prize with the project of the Parque Linear Ribeirinho do Estuário do Tejo, in Póvoa de Santa Iria.

In view of an extensive area, which seemed to refer in an obvious way to the universe of natural parks, the proximity of the city forced the thinking of new typologies that would combine recreation, sustainability, leisure, and nature. The first step, then, was to "open up" the area, walk it from wire to wire, and discover its corners. The Barrocal trails, one of its most valuable assets, already existed, but needed to be restored. They were the ones who guided the way to the geodesic landmark, the highest point in the area, where it is possible to have another perception of time - and of space. Because, around here, what existed were kilometers and kilometers of vegetation, rocks and cliffs, leaves of all shapes and forms, unknown (or unexpected?) fauna and flora, and colors, many colors, that change with the rhythm of the seasons. It was crucial to get to know Barrocal, to know its evolution over time, and the role it played, and still plays, in the city and the region. As you can read in the monograph that presents the project, “with about 425 meters of altitude, varying about 30 meters in relation to the more flattened areas of Castelo Branco, the Barrocal is, in essence, a place of interest geological." But that is not all.

The study process revealed the existence of past human occupation, and proof of that “there are fragments of ceramic and flint and polished stone artifacts, from the late Bronze Age, found in the Santuário Rupestre in the southern part of the Barrocal, 200 meters from the geodetic landmark. The human presence in Barrocal is revealed in other situations, such as the existence of clearings with low meadows, probably associated with grazing and agriculture in more leveled areas, than the presence of small olive groves confirms.” In view of all these contingencies, it was important to set goals, among them: respect, safeguard and value the place; promote the deepening of scientific knowledge and the dissemination of natural and landscape heritage in its different areas and dimensions; constitute a typology of “Nature Park” in the middle of the city, something innovative, and unique, due to its natural characteristics in an urban environment, and prepare it to be visited in order to guarantee its enjoyment in conditions of comfort and safety, without jeopardizing the protection and sustainability of the resources and systems that integrate it; promote a rational management of the park, with a view to its sustainability over time, based on a balanced use, compatible with the conservation and enhancement of existing resources. How to do it, considering the geomorphology of the site? That was the biggest challenge.

Topiaris decided that “the character of Barrocal required a sense of minimalist, poetic intervention, and respectful of the present resources and values, which are the main actors in this unique landscape. Almost immediately, the idea of ​​creating walking paths and observation points for the study and interpretation of the landscape, the elements that compose it and its evolution, was integrated into an organized unit, prepared to comfortably and safely welcome visitors. On the other hand, the project would have to ensure the maximum protection of these same values​​and their natural dynamics, since these are intrinsically fragile resources for trampling and intensive human uses. For this reason, and to safeguard the park from vandalism and less appropriate uses that occurred in the past, the installation of a peripheral fence with a solid, but transparent railing, was recommended. It was not thought of as a barrier between the Barrocal and the city, but as an act aimed at the protection and security of the Barrocal.” This is a park where everyone is welcome. “Access to the paths that make up the Park's main structure was designed on a metal walkway. With about 180 meters in length, this element was designated as Chave do Barrocal, due to its particular zigzag shape, necessary to attenuate the slopes associated with a difference in level of about 16 meters. This element, which is imposed by form and materialization, was imagined as a gesture of invitation to enter and discover the upper part of the park. Because parks - and here gardens and other types of green areas are included - as the architects refer, are increasingly relevant in the current post-pandemic context in which we live, and are places that are increasingly sought after by city dwellers. And these spaces are “increasingly democratic and transversal”, explains Catarina Viana.

Back to Barrocal. It is from here that you can access the Parque Infantil and Clareira do Olival (parking lot), “through a gravel path that starts on a small wooden bridge over a temporary water line. From here it will also be possible to reach the picnic areas planned for the second phase [of construction] of the park. The inclusion of a playground appears as a way to integrate uses strongly associated with the daily life of the city and with easy access from the outside. Parque do Barrocal is, in addition to being a space for education and science, a playful and recreational area where children have a privileged place.” One of the ex-libris of the project will be the Mirante do Barrocal, the highest point in the Park. This competes, neck to neck, with the Túnel do Lagarto, “due to its serpentine layout, adapted to the geomorphology of the place, and also, by the wooden slat that covers it in a particular way. This structure provides a very special game of light and shadows, projected on the gravel floor, which changes throughout the day and the seasons. The Túnel do Lagarto constitutes, like the Chave do Barrocal, an invitation to explore areas beyond the Park and through it you can access the Caminho dos Penedos.” There would be much more to tell, and to discover, about this magical place, built with the conservation of nature in mind, but for everyone to enjoy. For the world to enjoy. Let the most curious ones go visit it, so that, with their own eyes, they can see the immensity of this masterpiece.