“I think everything in life is art. What you do. How you dress. The way you love someone, and how you talk. Your smile and your personality. What you believe in, and all your dreams. The way you drink your tea. How you decorate your home. Or party. Your grocery list. The food you make. How your writing looks. And the way you feel. Life is art.” - Helena Bonham Carter

If life is art, we're all artists. Maybe all of this "journey" isn't about us becoming great painters, writers or designers. Maybe it's about finding a tool, something that gives meaning to the darker side of life, something we can throw back to the universe so we can feel we matter, that we make a difference. But, in the end, maybe it's just about being alive, about really being bold enough to live - not just spending our time here, but to sing it, paint it, dancing it or writing it, to transform it into our own masterpiece. To create moves us. Noone that creates can remain stagnated. And, one day at a time, from small to great gestures, Art can invade our life in all magical forms, ones that make us go through the most upsetting battlefields as well as double as safe harbours, where we can rest.

Whilst this issue is focused on Art as its theme, each one of our other issues, and correspondent themes, are always thought of, treated as and designed with a common thread, bigger than the theme itself - the art and creativity of all elements that are a part of each issue. From photography to styling, from design to writing, from make up to illustration, from creative direction to the way it is perceived and read, there is a common link - the need for creativity, for an artistic language in our lives, one that surpasses linguistic, geographical and cultural barriers, is as universal as the emotions that define us as human beings.

When LightHouse Publishing relaunched Vogue Portugal, exactly 30 issues ago, the biggest challenge, the greater responsibility was making sure we were at the same level of these two words: Vogue and Portugal. And making them one, true to itself and to the DNA of each one of them. The heritage of a historical and international title like Vogue couldn't limit itself to being a local magazine. This Vogue, made in Portugal, by a portuguese team, has this added responsability. And also has an immense pride in national and international talent which makes it much more than a monthly magazine, but and artistic and timeless platform, in the two ways that makes the most sense: show the world the best that's made in Portugal and the best that's done in the world, in Portugal. Less than two month in after that relaunch, Vogue Portugal started establishing itself international, with a big circulation in Brazil, selling out in London, Paris, Milan, conquering subscribers all over the world, like Spain, Germany, Russia, China, Japan, Australia, USA.

Covers, fashion stories, investigations and interviews done by Vogue Portugal are headlining international media, month after month. And it's inevitable to feel a sense of pride when you see Portugal quoted as a reference or source - at the opening of a news primetime program in RTL or in many late night shows in the US, in newspapers, magazines and hundreds of sites all over the world, or even in the many, many shares in social media of readers holding the magazine, all over the planet. The growing amount of messages that come from these totally different countries, asking how they can access copies of Vogue Portugal inevitably led to the creation of our online store (vogue.pt/shop), where all the issues on stands, previous ones and limited editions can now be ordered and sent to anywhere in the planet, at the click of a button.

Realizing a magazine, written in portuguese, overcomes so many of the predictable barriers makes me be sure that the artistic language and way are universal, that the power of covers and images created, by all talents, emerging and established, involved in each and every issue, are the bridge. That art and creativity are ambassadors of Portugal, the true influencers in a planet that needs much more than beautiful images void of content. Because Art is not always about pretty things, or just a pretty picture. It's about who we are, about what happens to us, about how our lives are affected. Life is experience and Art is the expression of that experience.

P.S.: And because richness and creativity in words also don't deserve to have borders, from now on, and already throughout this issue, you'll find several articles with a QR Code, signaled with the notice "English Version", so most of our texts can be read by a vast part of our audience unable to read portuguese. Yet. 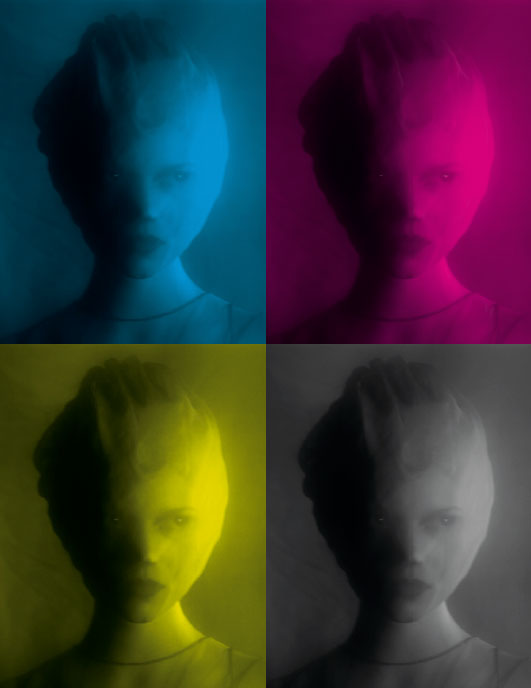 Although rich and diverse artistically and picture-wise throughout the issue, our cover reflects a simple and minimal image, clear in its message. One picture, four different covers, in the four-color palette CMYK (Cian, Magenta, Yellow and Black), chromatic base for the Graphic Arts and Painting itself which, combined with white, allow the almost limitless creation of tones, as limitless as our imagination. So it is Art. So it is a magazine, each issue always starting off with a blank canvas. The model, Ola Rudnicka, photographed by Guillhaume Roemaet, is part of one of our Haute Couture shootings, created exclusively for Vogue Portugal.