English Version | The Art of Fashion

The world has grown accustomed to accepting a white porcelain urinal as one of the greatest expressions of Dadaism, and that a banana duct-shaped to a wall can be sold for 108,000 Euros. However, it is still having some difficulties accepting that a dress with 6,000 meters of embroidered tulle, resembling a pile of vaporous clouds and demanding a centenary savoir-faire, is called “Art”. Why? 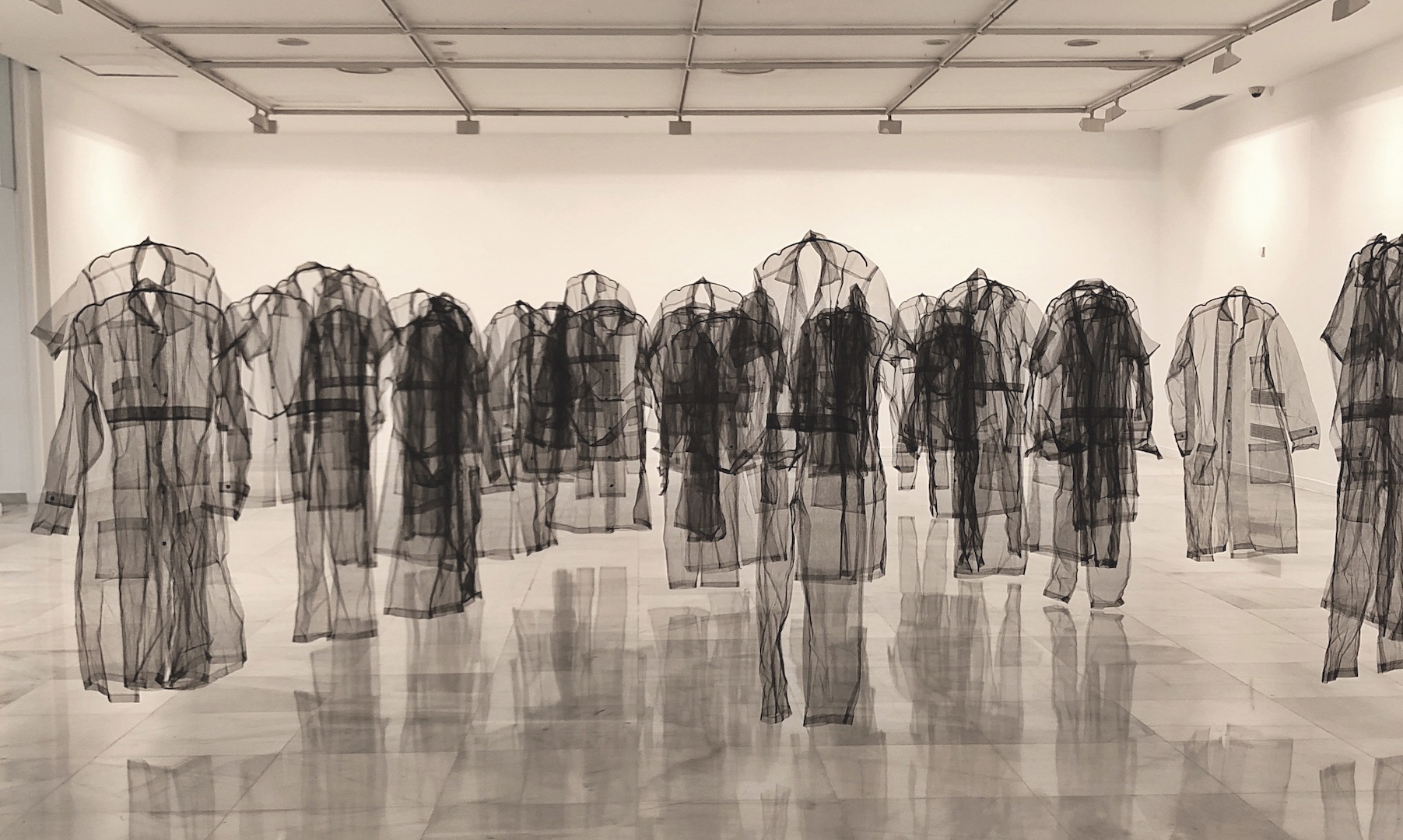 It is a sign of the times. It is a blow of beauty. It is a mix of everything that is real and imaginary. It is the mirror of a culture, the portrait of a society. It is a dream come true. It is the word that occupies the silence. It is the action before the awe. It is the mix of possible and impossible, of the past and the future, of desire and will. Fashion is all this. And more. It is the cotton onesiethat protects in our first days of life, the vichy uniform we wear to kindergarten, the waterproof kispo that keeps the rain way during school breaks. It is the tweed skirt in the afternoon movies, the wool sweater we got for Christmas, the chiffon dress we wear to birthday parties. It is the denim trousers we covet in our teenage years, the lurex leggings we worship when wisdom has not yet overcome taste, the lace bra we try with traces of innocence. It is the velvet blazer we covet after we are 30, the leather jacket we cannot abandon due to our love for the big screen icons, the felt hat that states a relaxed personality. Fashion is all this. And much, much more. Apparently, fashion can be anything. It just cannot be art. Not even the great shows of Alexander McQueen, the luxurious extravagance of John Galliano’s creations for Dior, the greater than life presentations of Karl Lagerfeld for Chanel and Fendi. Not even the artsy looks of Rei Kawakubo. But if none of this is art, how do we explain the emotions all of this awakes in us?

Coco Chanel joined Picasso to draw the wardrobe for Ballet Russes. Elsa Schiaparelli used Dalí to create lobster-dress. Yves Saint Laurent devoted an entire collection to Mondrian. Gianni Versace stamped Andy Warhol’s Pop Art on tight jumpsuits. Marc Jacobs used Jeff Koons’s genius to elevate Louis Vuitton’s hype. We cannot escape it. No matter how many encyclopedias we turn upside down, fashion and art have been walking hand in hand since humanity became conscious that the act of getting dressed is more than a superfluous need. However, and historically speaking, fashion is usually not considered at the same level of other artistic expressions, such as painting, music, sculpture or architecture. Why? We asked Alexander Fury, fashion features directorof Another Magazine, men’s fashion critic of Financial Times, and author of countless books and essays. “I believe there are several reasons. On one hand, there is a hierarchy even in those arts – painting is considered a purer art form than sculpture, for instance. The pragmatism of fashion (the fact that it covers a body) often diminishes it, just like a great chair or a beautiful porcelain piece are also utilitarian objects, not mere decoration features. There is also a connection between fashion and vanity, which is a sin – and the persistent feeling of a certain Anglo-Saxon puritanism about praising Fashion lingers due to that context (that is why Fashion seems to be more defended and valued in Catholic countries, in my opinion). And then, there is also some misogyny – for many, fashion is considered a ‘feminine’ interest, and thus less serious and meaningful.”

Less seriousness and meaning, or more prejudice and ignorance. Because the relationship between them is, no doubt, symbiotic: we can say as much about a culture looking at its paintings as its clothes. Or is this an overstatement? “For me, the fundamental difference between art and fashion is that fashion is equalitarian. Although it is often seen as a symbol of elitism, it is really democratic – at any social level, people need to get dress, and usually they try to adorn themselves. So, fashion itself is present even where Art is absent. The tension between dream and reality – between the person you are and the person you want to be, between the pragmatic requirements of clothes, and the image they wish to convey – is universal.” This idea is supported by Graziela Sousa, professor and researcher of the Faculty of Architecture of the University of Lisbon and responsible for the Special Projects of Associação ModaLisboa: “Fashion has a very strong social representation. Whether it is high street or couture. It says something about where we are, how we think, and the choices we make to live, or to co-exist, socially.” And she highlights: “Fashion is art and it also design. A few days ago, I read something the director of Parsons School of Design said, and it was something like this: We will always have two arms and two legs do dress; the body needs to move and to be covered. And I think that is what makes fashion special – we cannot wear a painting. But Fashion, that covers you and says so much about you, is itself a celebration, and as a social, psychological and human reflexion, it offers some sort of added value – because you can also live it.” But how does art, so indecipherable and unattainable translate into our daily wardrobe? Graziela has an optimistic stance on this, but Fury does not: “It is often in a simplistic way – and that is the problem of putting fashion and art at the same level,” explains the journalist. “To be honest, quite often the inspiration is plain and superficial. A painting becomes an illustration that is, in a way, a prostitution of its original intention and a commercialization. High Fashion is closest to art in its singularity, the idea of a singular creation. That said, we can see something from Vivienne Westwood’s fall/winter 1990 collections and realize that the entire aesthetic proposal of the season is centered on spreading the wealth found in baroque and rococo paintings, not just reproducing its graphics.”

Is fashion an art expression, and one of its purest, because it can be experienced daily? Since it relies in an actor to perform it, is it a sort of performance art? “Historically, the [notion] of fashion evolved from ‘applied or decorative art’ to ‘artistic product’. Not just due to the inherent plasticity of the work itself or the heritage it represents”, highlights Graziela Sousa, adding, “But also because it is aligned with other types of cultural representations and an artistic vision”. Alexander Fury does not recognize the need of such an association. “I do not think we are making fashion a great favor by calling it art. Just like a great chair – a Prouvé, for instance – great fashion is a great design piece. It does not need art to be valued.” And yet, these days, just like art, Fashion is an industry that is ruled by supply and demand. “Now we have artists like Jeff Koons or Damien Hirst, who employ hundreds of people – it is a normal model for artists. And there are people is some areas of fashion, such as Marc Jacobs, who have that type of entrepreneurial sensibility”, said the writer Glenn O’Brien, as quoted by the website Not Just A Label. The parallel explored by the American is a curious one since these are industries that follow the same rules. The difference is that the validation of its final products is completely different. It is easier to say that a Francis Bacon painting is art than to agreed that an Iris van Harpen dress can belong to that same category. Maybe that is why many designersuse their shows and presentations to convey their imaginaries. “Sometimes, a fashion show can be confused with performance art– but that depends on the designer’s intention. Alexander McQueen had artistic intentions when he created many of his clothes, not just by imitating art, but also by aiming to evoke a similar emotional response.” Almost every Alexander McQueen show was a challenge to eternity. The presentation of the spring/summer 1999 collection (when two robots spray-painted Shalom Harlow’s white dress) was a divine act. Commenting these memories, Graziela adds: “I always remember Henrik Vibskov [a Danish designer] or the last Marc Jacobs show at New York Fashion Week. I also remember everything by Balenciaga and Gucci. And those rooms where Moncler presents its collaborations – special applauses for Pierpaolo Piccioli. It is Fashion as art with every inspiration it has to give. I still believe that is the last fulfilment of the work of art – the human emotion and contemplation on the other side.”

The impact of fashion is both its strength and its salvation. Although rejected as art, it has many ways to express its creativity. An example? The "Savage Beauty" exhibition, held at the Metropolitan Museum of Art, in 2011, as a retrospective of McQueen’s work, was one of the most visited of that New York institution. And it generated a run to the museums. Not just to admire paintings, but to admire clothes. “A museum executive told me that fashion was the new Picasso – that fashion exhibitions now attract the same number of visitors that used to be exclusive of world-famous artists. I think that changed the way fashion is seen in the museum context – but it is still part of decorative arts. That said, fashion exhibitions in museums have completely changed over the last 50 years and will, undoubtedly, change again.” Where does that leave us? Can we say, loud and clear, that fashion is itself an art form? “Fashion is not art: fashion is fashion. And fashion is fabulous,” says Alexander Fury. “Fashion is many things – and art is one of them,” says Graziela Sousa. And where does that leave us? All this is art. All this is fashion. And, if not, may it be a nice dream come true. A dream as nice as a porcelain urinal or a banana duct-taped to the wall.

Talking about art, fashion and the art that is fashion is also talking about - and talking to - Andrew Bolton, the man behind some of the biggest art exhibitions dedicated to fashion. We don't want to spoil anything, but that's exactly what we did.