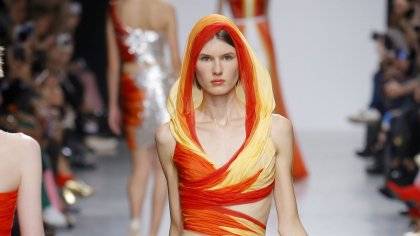 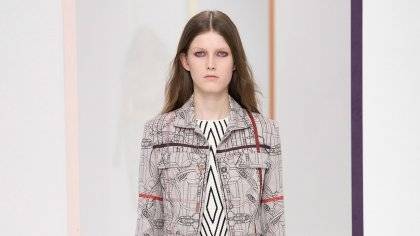 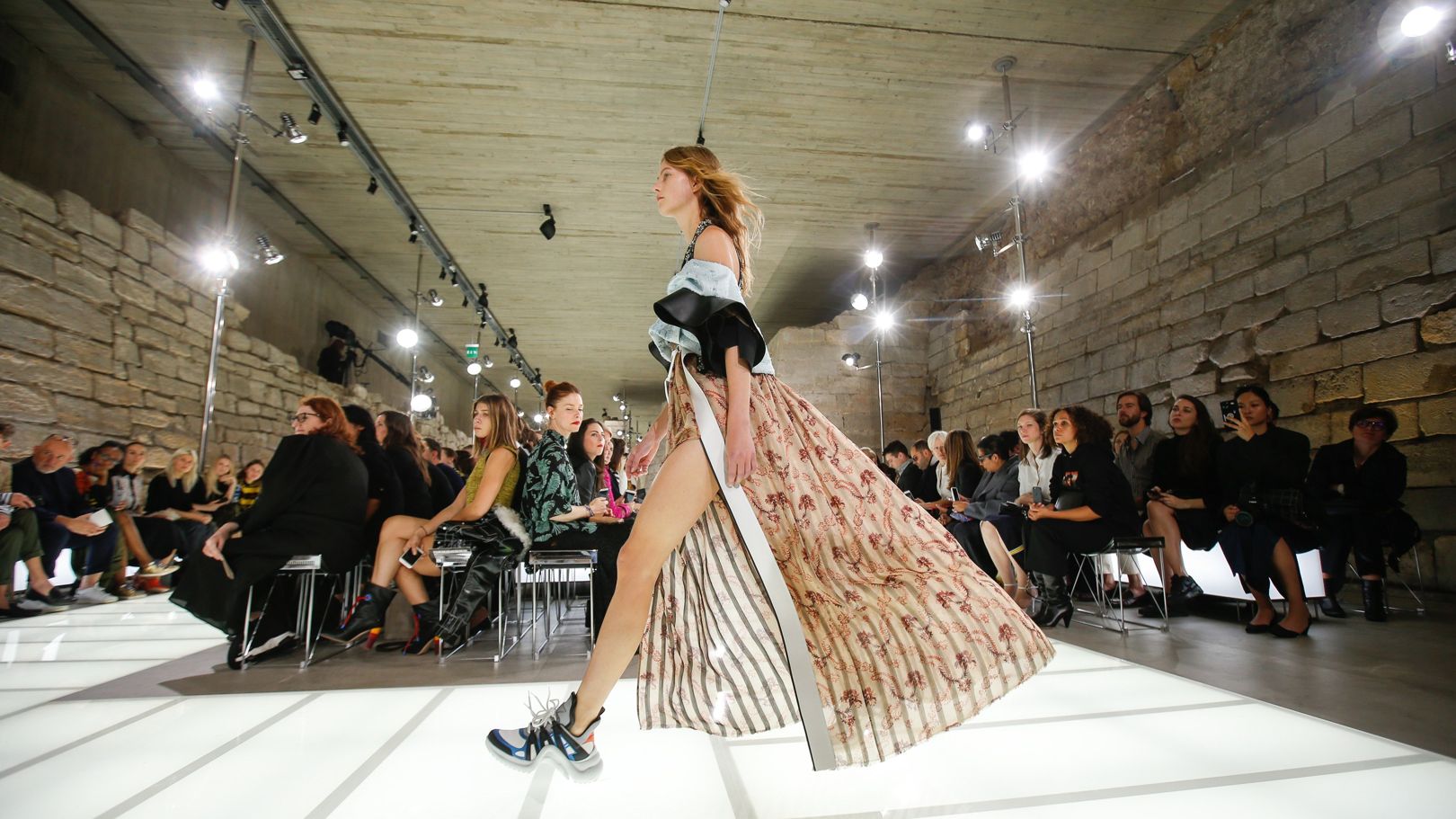 With 18th-century decorative grandeur and sportswear from the new millennium, Louis Vuitton closed the four-week fashion marathon on a high note. As the models powered through the 11th–century dungeon under the Louvre, there was a youthful energy facing off what looked like re-makes of historic men’s costume. On one side, bold sneakers; on the other, elaborately decorated jackets as worn by aristocratic gentlemen before the retreat into solemn suits. 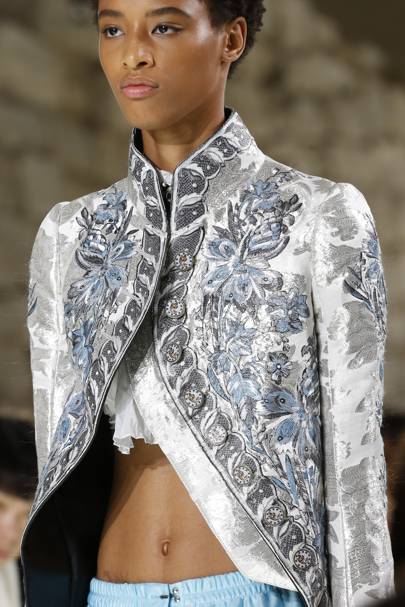 Not since his early days at Balenciaga, when Jules Verne was one of his subjects in 2001, has Nicolas Ghesquière shown such a powerful mix of history and modernity. In the past, the mandate was futurism with craft. Now the handcraft is used to re-boot historic pieces.

As cheers echoed among the ancient stones, the designer admitted that this Spring/Summer 2018 collection was a new experiment. 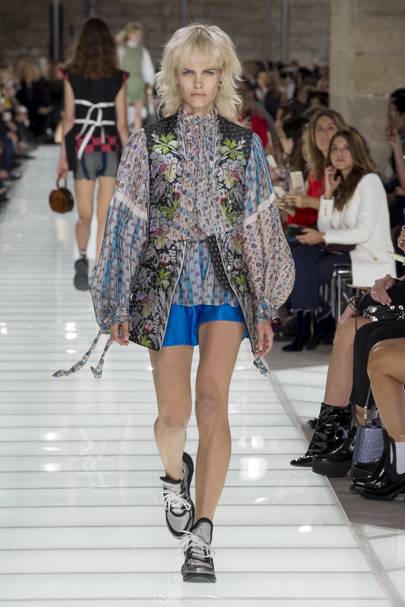 “It’s an anachronism,” said Ghesquière, who is in his fourth year at Vuitton. “It’s about how some pieces are considered costume, and it was interesting to explore a way of incorporating them again in a wardrobe that I love. Let’s call it ‘anachronism with a hint of romanticism’.”

Cate Blanchett wearing a sporty Louis Vuitton outfit was in for a surprise on the runway.

Indeed! Whilst Cate Blanchett was wearing a sporty, leather cap-sleeved vest, like a Space Age fencing ensemble, the models were back in the days of flower-embroidered tailcoats. But those were worn not with the pantaloons of the period, but a pair of lightweight shorts, bare legs and basic sneakers.

The juxtaposition of past and present included other pieces where a vest, floral and flourishing, was mixed with an equally decorative blouse. Or that full-sleeved shirt appeared in soft white chiffon with a tie neck – but again with shorts and bare legs underneath. Other hybrids included a bolero-cum-harness or maybe a version of the external brassière that no one wore two centuries ago.

What was the designer himself trying to say with this meld of history and modernity? And where were the roots of the concept?

“I went to the Met [New York’s Metropolitan Museum] and saw a wonderful collection of 18th-century frocks – that was a big inspiration, as you saw,” Ghesquière told me after the show. “I thought it was great to take the flamboyance from that collection and mix it with all the sports clothes that are integrated into our wardrobes these days. So they are not sports clothes any more, but street clothes, our clothes. And I thought, ‘What kind of category of clothes can I explore to make a surprise, with this feeling of costumes?’ “ 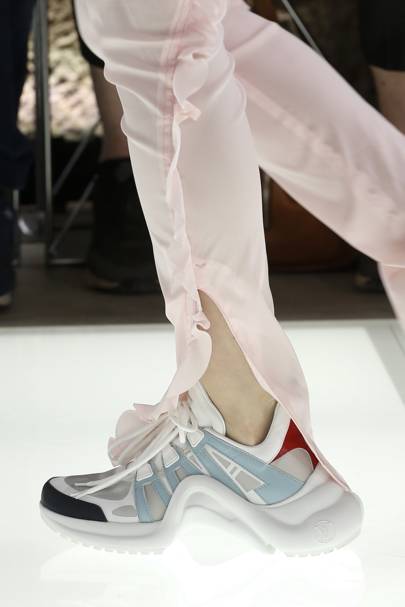 What made the mix work so well was the softness and sweetness of the historical references, compared to the hard silhouette and tough spirit for which Vuitton has recently been known. The two different visions merged in some of the newer fabrics, including Japanese jersey, stretch silk, and ultra-thin layers of French silk, jersey, and patches of linen. 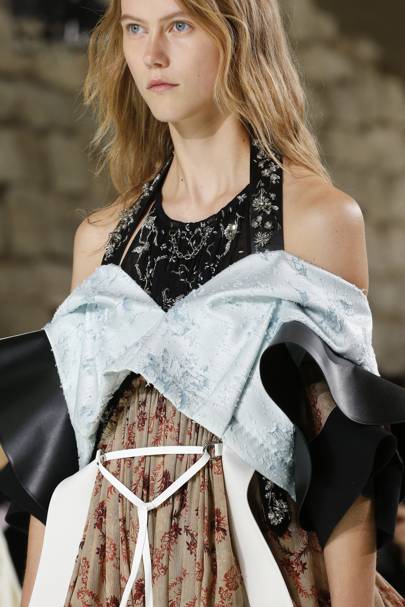 There were bags, of course, rather more streamlined and ergonomic than the clothes. But give the company time. It is sure to offer signature bags in floral brocades and embroideries, with their opulent silver and gilt sheen. 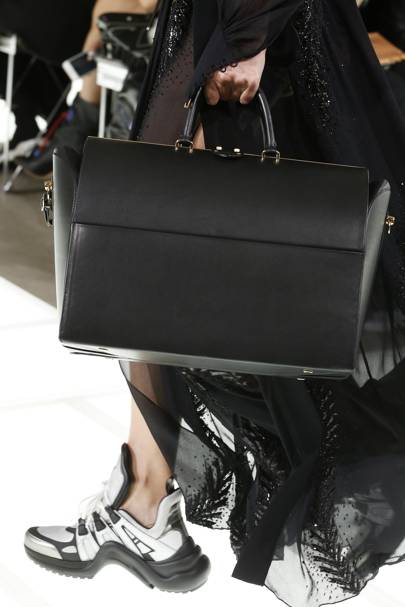 With this collection, Ghesquière found a way to dip into history and re-boot glamour for the sneaker generation.

“It’s the attitude: it’s the look and the walk of the girl, and the attitude it’s giving,” Ghesquière said. “We all walk like that now with sneakers, and I thought it was great to put it with the most extreme pieces – and what could be better than French and English 18th-century menswear?”