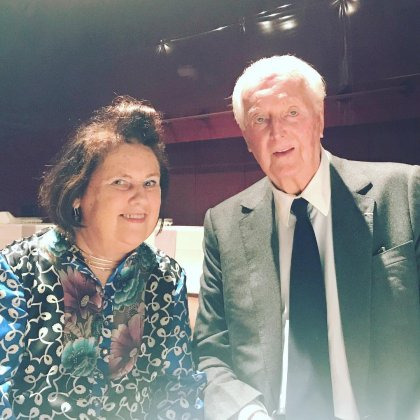 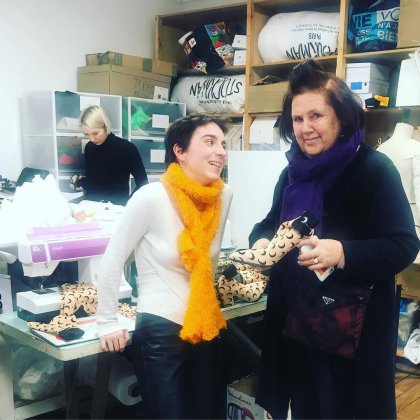 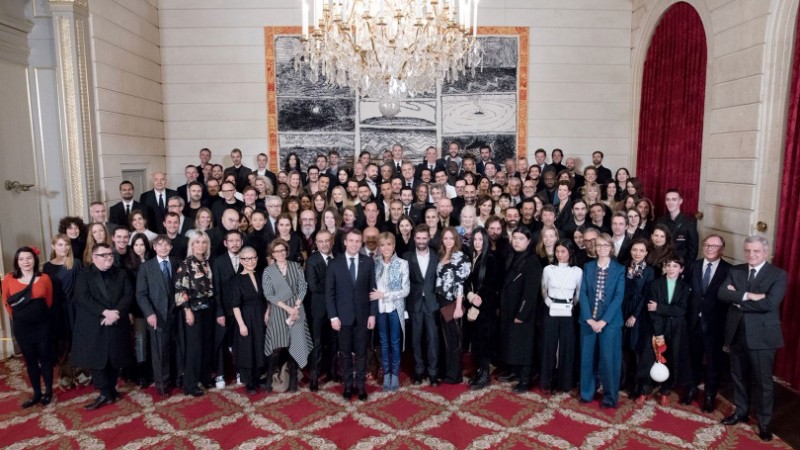 The breadth and influence of designers from outside France is now overwhelming ‘La Fashion Week’, as the Parisians like to call it. I remember when the wave of first Japanese and then Belgian names crept on to the French calendar. Now it is a truly global gathering.

President Macron is the first French leader to acknowledge the diversity of fashion today – and to celebrate it. The party at the Elysée Palace, co-hosted by his wife Brigitte, was proof of the global reach of an industry that used to be local, not global. Or perhaps it is fairer to say that it was built on the concept of ‘France First’.

Here is my overview of nine designers and what they they brought from their countries of origin to the City of Light.

Is it an advantage to have French blood in your veins? Not necessarily. Joseph Altuzarra moved from France to America in his late teens. And when he started to show in New York, he created a ‘Frenchie’ glamour with subtle details. Why doesn’t that work now that he presents in Paris with support from the Kering group? 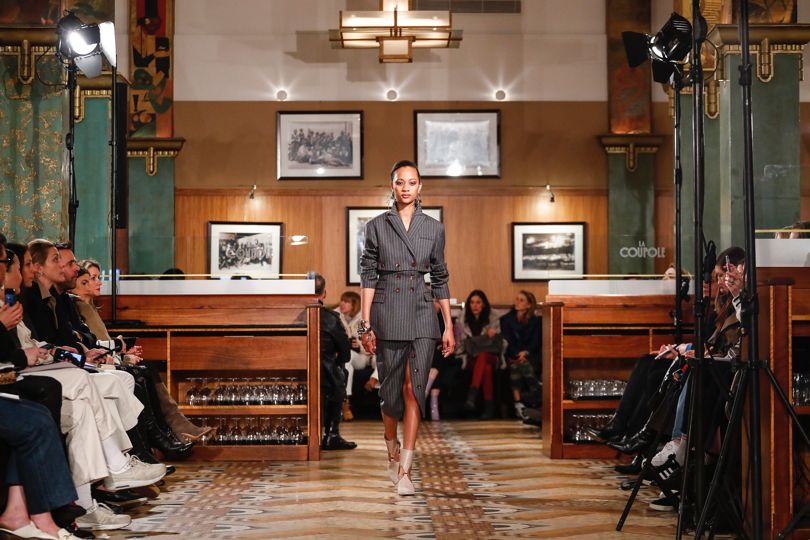 Because what might seem witty in Manhattan looks like a cliché in his country of birth, from the choice of venue at La Coupole – a tourist restaurant haven – to clothes such as familiar pinstripe trouser suits. 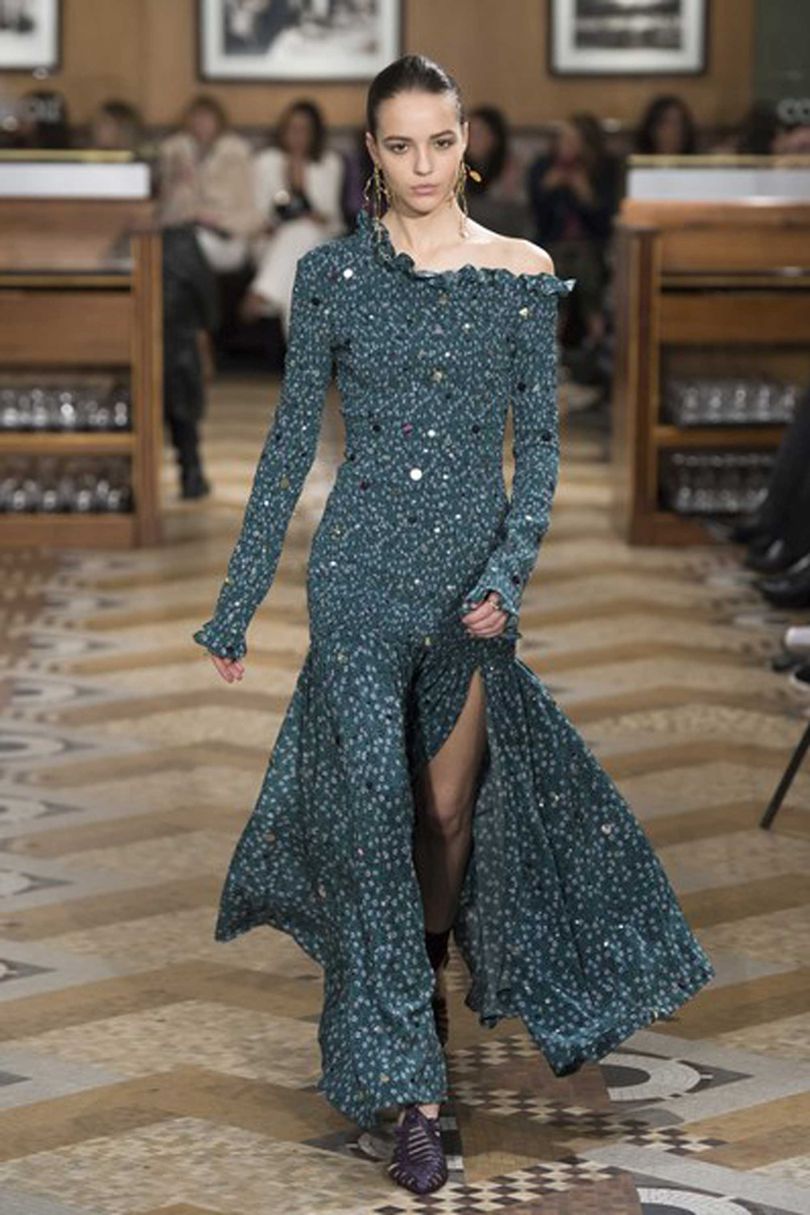 There are still takers for smart day clothes, and the designer knew how to put a swagger into a frilly white shirt or a play on hard/soft when a sleek black dress had a bodice covered with silvered eyelets. Upper-crust women could find some nice lunch-and-office wear, including a dress with a decoration of printed feathers. Yet even if the designer still pined for the discreet charm of the bourgeoisie, there was not enough original thought among the double-breasted coats and smart-casual dresses.

Manish Arora: “Pink-gold is my religion”

Manish Arora must be admired for his versatility; his ability to grow a new look from his Indian roots. From the graphic top-knot of a hairstyle to the multi-patterned Japanese geisha shoes, the designer had a witty way of embracing his heritage of colour and pattern – and looking for inspiration beyond India to the Far East. 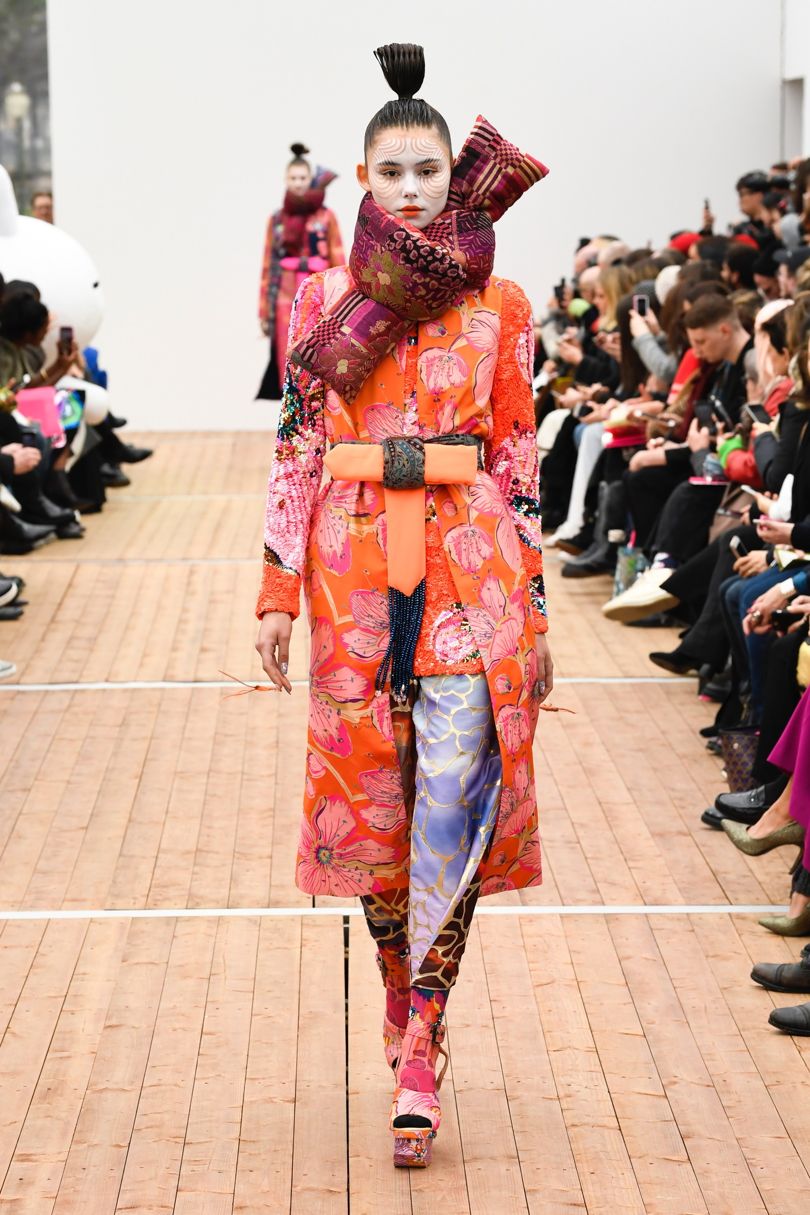 First there was the well-known sense of fun – this season with the outsize Chinese emoji mascot taking up space on the front row. Then there were the explosions of butterflies; flowers on a gilded rib cage; the padded scarves in stiff knots at the neck; and the minimalist kimono wraps with maxi patterns of cracked eggs and fish. Moving from India to Japan was an imaginative surprise. And there was a tilt, too, towards China, where Manish’s not-so-Zen outfits have captivated customers. The designer said that his sales in the Far East are soaring and that he will open five Manish Arora stores in China this year. 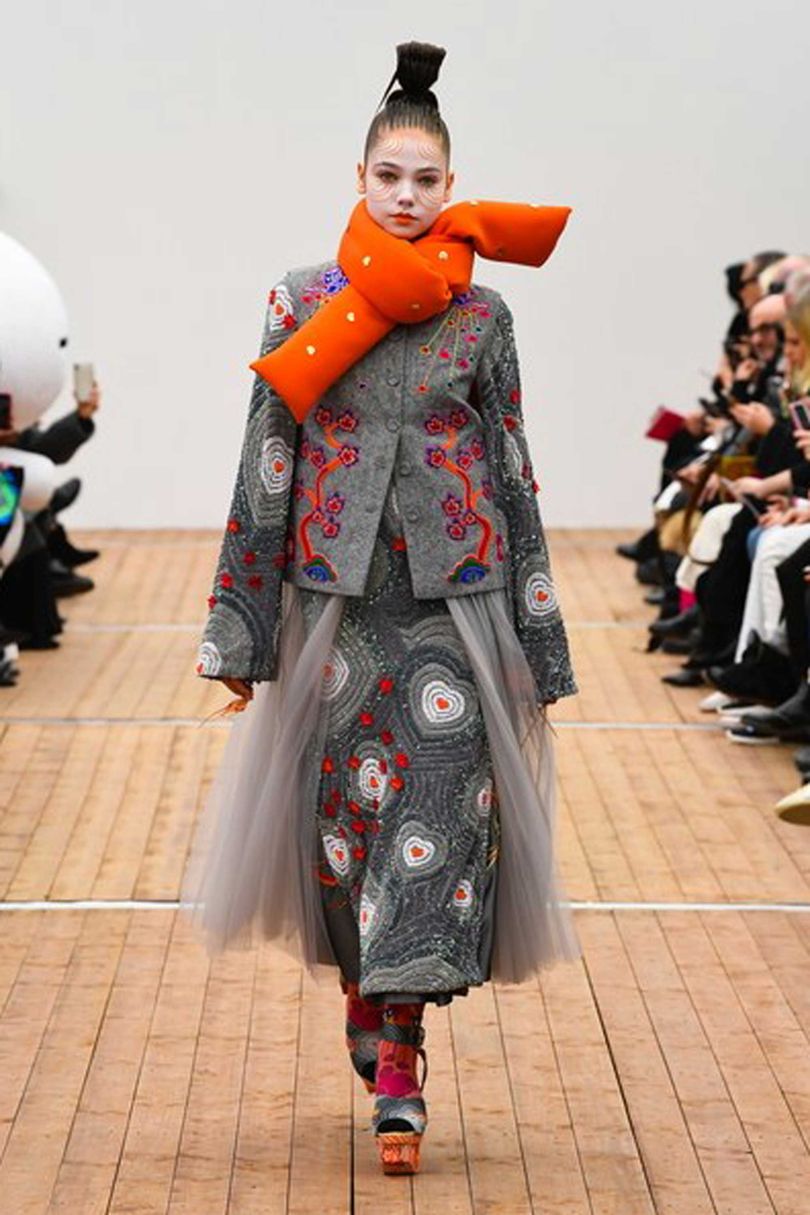 Thom Browne sees fashion as art and the backdrop to his show was magical. Models, all with identical hair do’s and outfits, which included the broadest of trousers, started drawing on easels, as if in an art studio, while the audience waited in little cabins for the show. 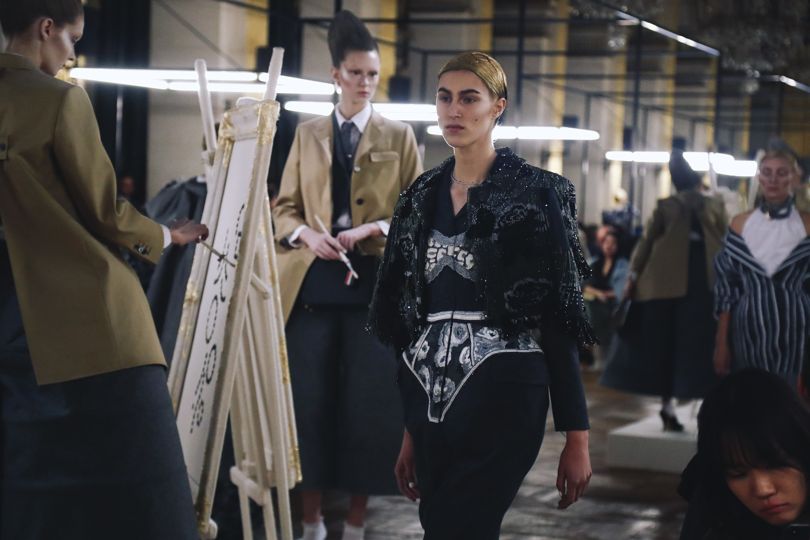 It could only be described as ‘body language’, for models came out to Madonna singing ‘Vogue’, while 50 shades of grey – from layers of body-conscious tailoring to slender, floor-sweeping dresses – presented fashion from the inside out. There was a deliberate focus on bosoms and other curvilinear areas. A jacket might have buttons strategically placed on the bust with roses gathered on the hip line. 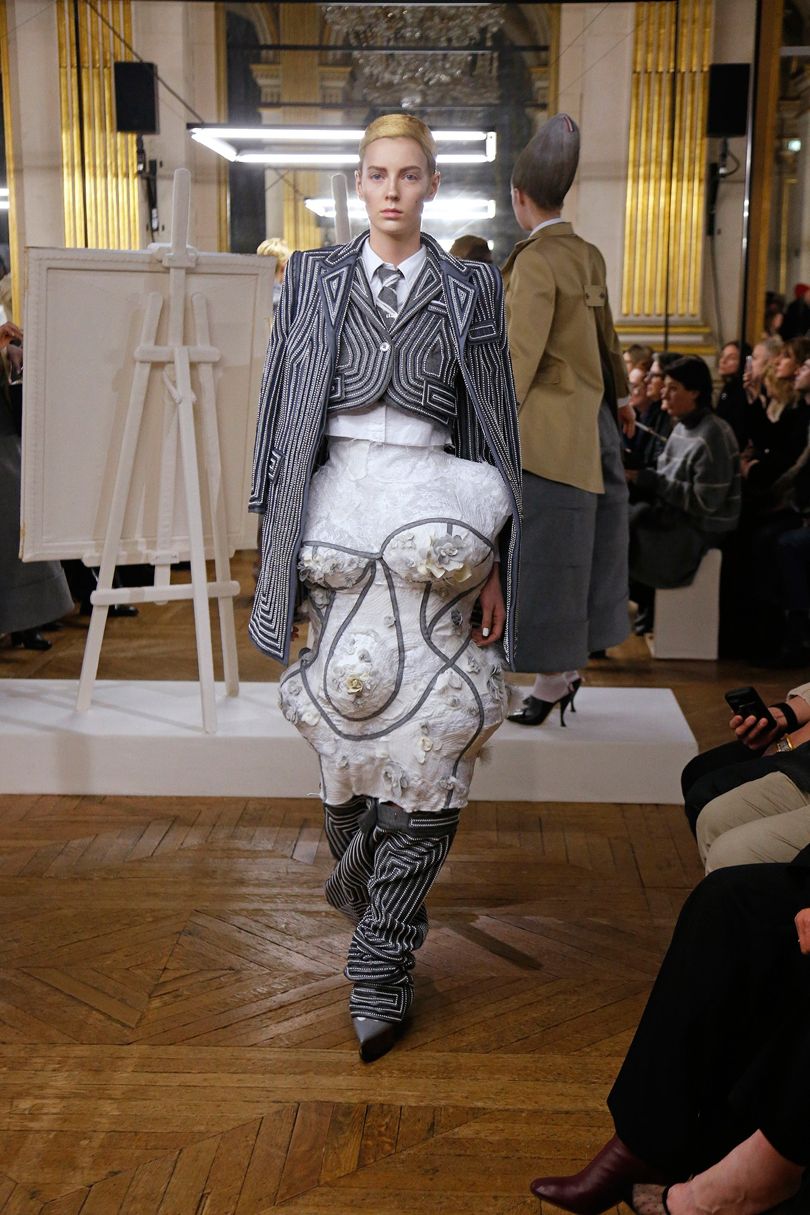 The brazen sexuality included a butterfly bow across the upper bodice, Picasso-like compositions of female bodies, and a finale of men in high heels and dog heads. It might all have seemed like kitsch, but the sophisticated presentation and fine workmanship produced a masterly effect.

The intelligence of Indian designer Rahul Mishra was to explain how he brought memory to modernity. He summarised in his show notes the words of Carl Jung’s Memories, Dreams, Reflections, which read, “I have never lost a sense of something that lives and endures underneath the eternal flux.” 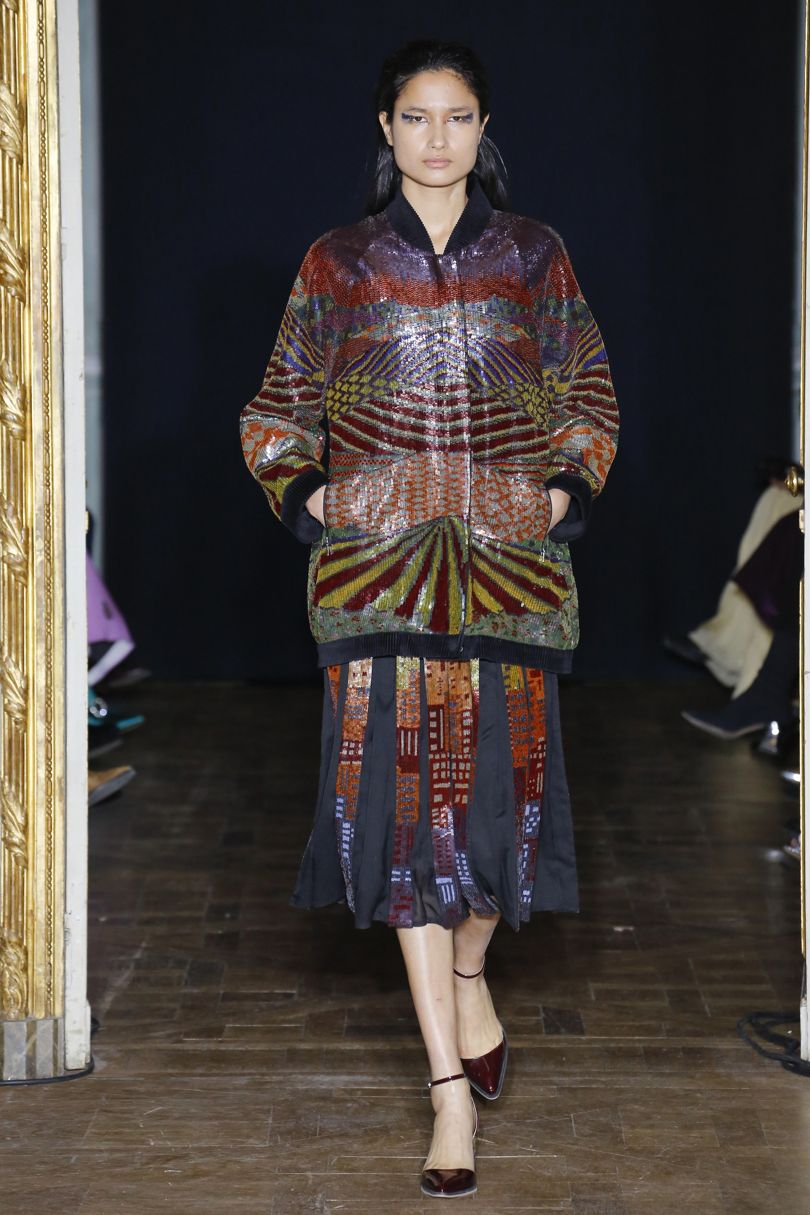 The Indian designer discussed openly the roots of his own creativity: the “bright yellow and the electric blue of my dazed youth; the withered brocades in my mother’s wardrobe; the ubiquitous corduroys of our childhood; empowering shoulder pads and the sequins of the disco era – a phase of our youth”.

Which designer has not been influenced by the past? Yet the wonder of Rahul Mishra’s work is that his collection expressed the poetic vision he has of his country of birth, while at the same time being sophisticated and international. It was composed, of course, on handcraft, such as an ankle-length coat slipped over a lacy blouse and graphic striped skirt, embroidered in checks and birds near the hem. Next was a wonder of a tailored suit and embroidered, coat, with memories of the Mughals and those words of Diana Vreeland from 1962, that “pink is the navy blue of India”. 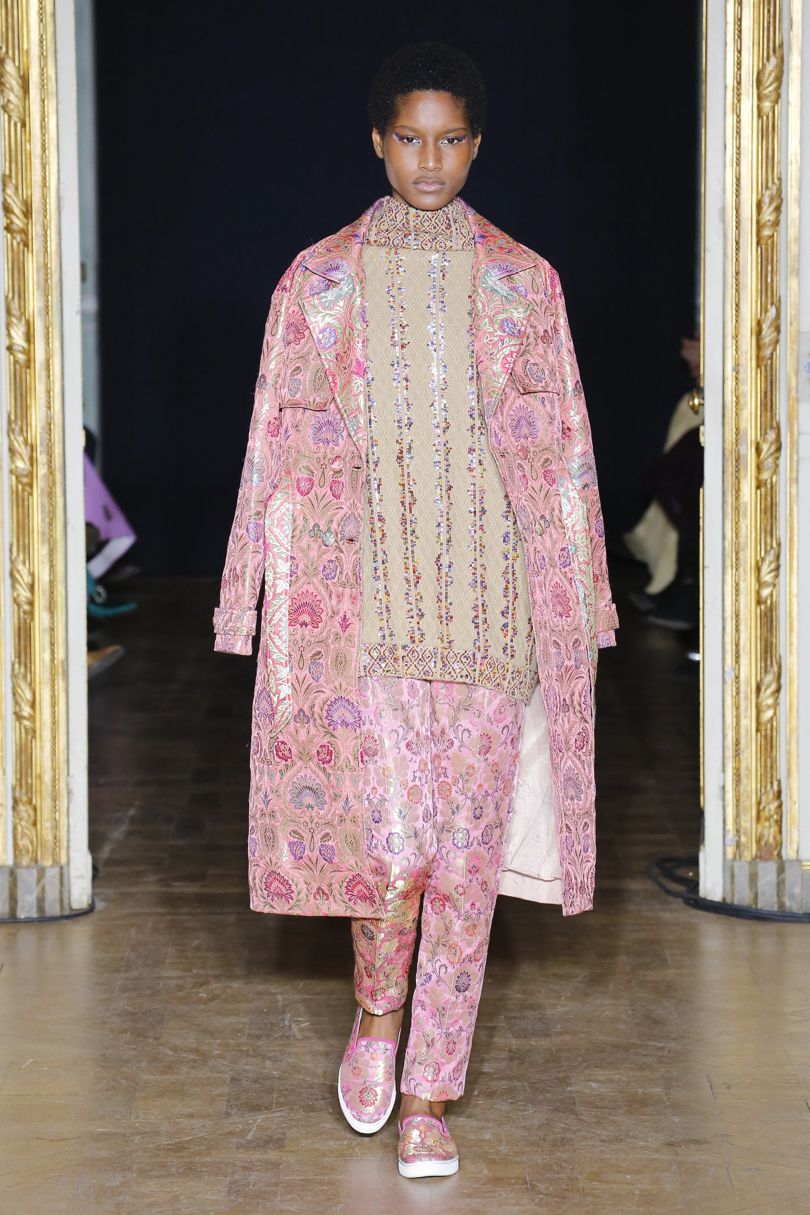 Rahul Mishra translated all that into a marvel of tailoring meeting lush surfaces of plaids, squares and geometric lines. Or he mixed colours such as a burnt-orange coat with a purple dress and peach-pink skirt. It was about handwork with a great vision: Indian craftsmanship at its finest, even when played out in black and white.

Miu Miu: Behind the beehive

Fashion and politics are always an awkward mix. But was the Miu Miu collection supposed to be a clown act in response to the Italian election and its populist Five Star Movement? Or just another attempt by Miuccia Prada to produce a zany fashion vibe? 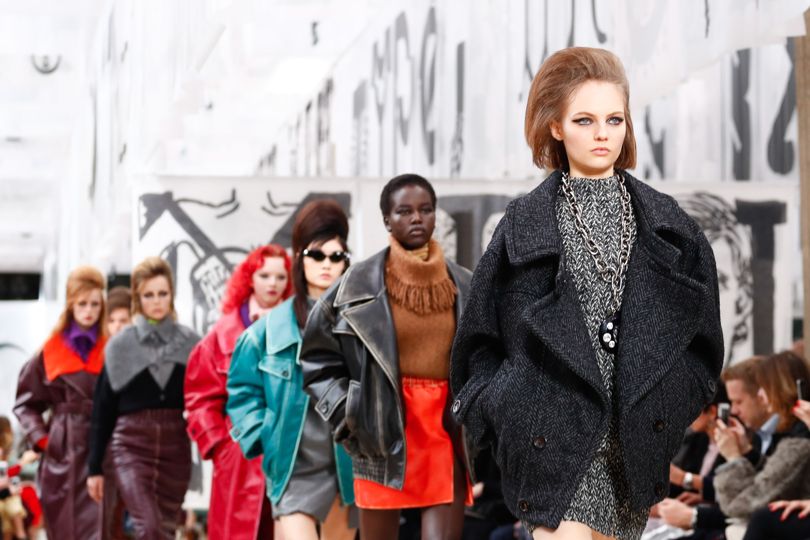 The clothes seemed to move from the 1950s to 1980s, and between models of all shapes and hair do’s – not to mention the beehives. It all started with drawings of women pinned to the walls defining the Miu Miu type as “an ABC of actions, behaviours and comportment”. Then the show moved to a period when fashion made a mockery of normality – the overblown hair do’s of the early 1960s and the big-shouldered denim suits of the more mannish 1980s. 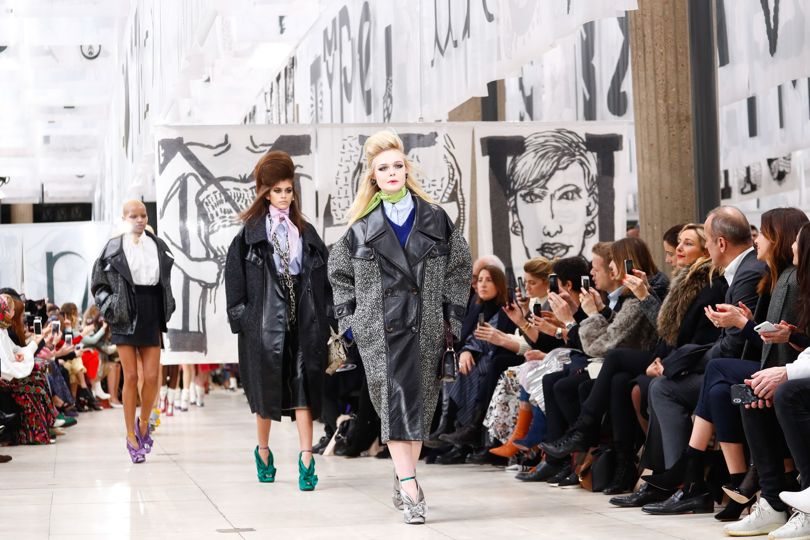 Taken apart, there were fine pieces, especially the tautly belted coats and rounded jackets – if not the familiar platform shoes with ankle socks. In contrast to shapely tailoring, dresses were over-the-knee and lean. Yet there was a feeling of desperation, rare with Miuccia. The ugly aesthetic that was the essence of Prada in the 1990s seemed like a joke that has turned sour.

Given the ritual enthusiasm with which Japanese people see cherry blossom as a rite of spring, it is not surprising that the words “silent energy” and the question, “From where does life come and to where does it go?” were on the programme notes at the Issey Miyake show. 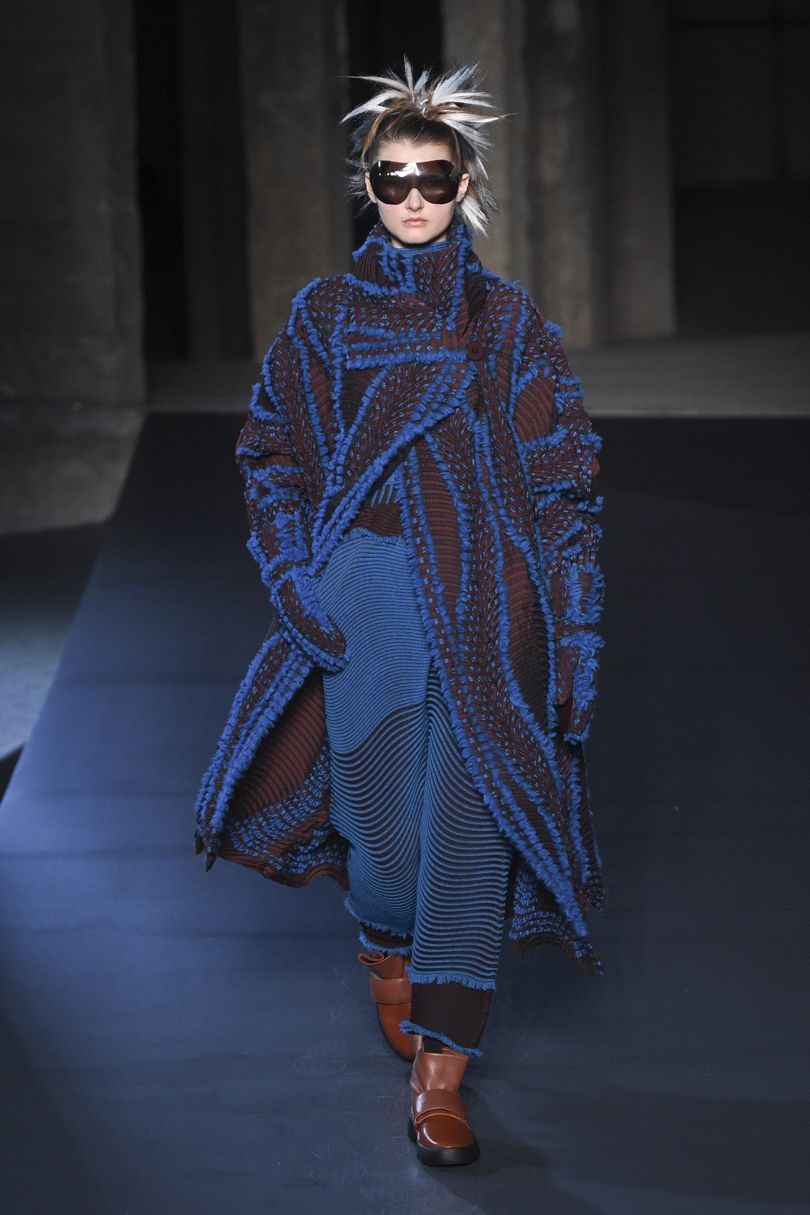 Designer Yoshiyuki Miyamae started the presentation as if in the depths of winter, displaying snow-white outfits with a hairy surface. In the dark stone basement of the Palais de Tokyo, they were followed – with a few flickers of light – by clothes in russet shades, as if they were remnants of autumn. But as ever with this innovative brand, the ‘Steam Stretch’ treatment seemed to bring spring to life, producing bouncy clothes in strips of black and white or even a plain black dress with varied surfaces of different fabrics. 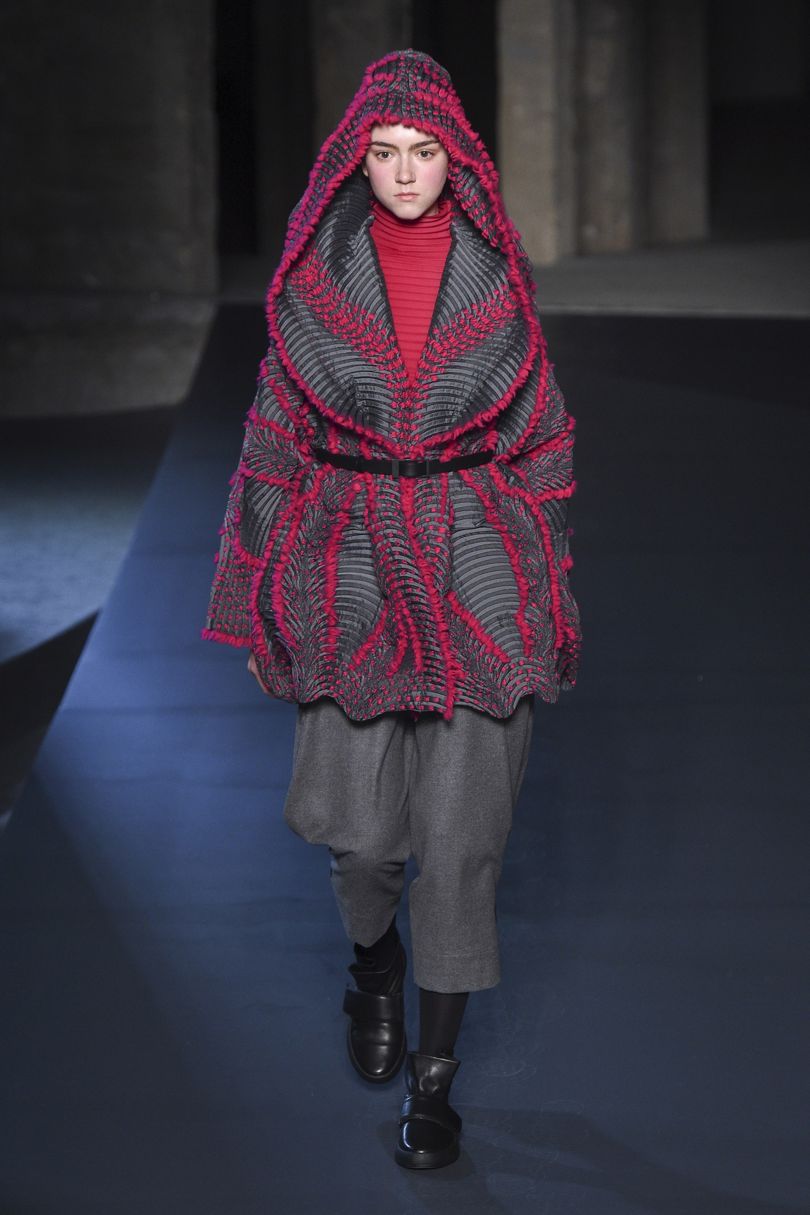 A sudden switch to sunshine yellow or sky-blue suggested that the permafrost had melted, introducing not only bright colours, but a sense of forward movement. Or, in the designer’s own words, “bringing joy and fresh surprise”. Even without understanding the ever-inventive Miyake fabric treatments, the show lived up to Yoshiyuki’s promise that “we envelop the breath of the wild, a sign of hope”.

“Capturing every last bloom” was Elie Saab’s description of his “bouquets d’hiver” – the winter flowers that inspired his collection. The effect of nature’s darker side was not just in the colours, often with a black background, nor in memories of his native Lebanon. The designer was inspired also by history – by the prim necklines of the Victorian era and the velvet bows in Renoir’s paintings. 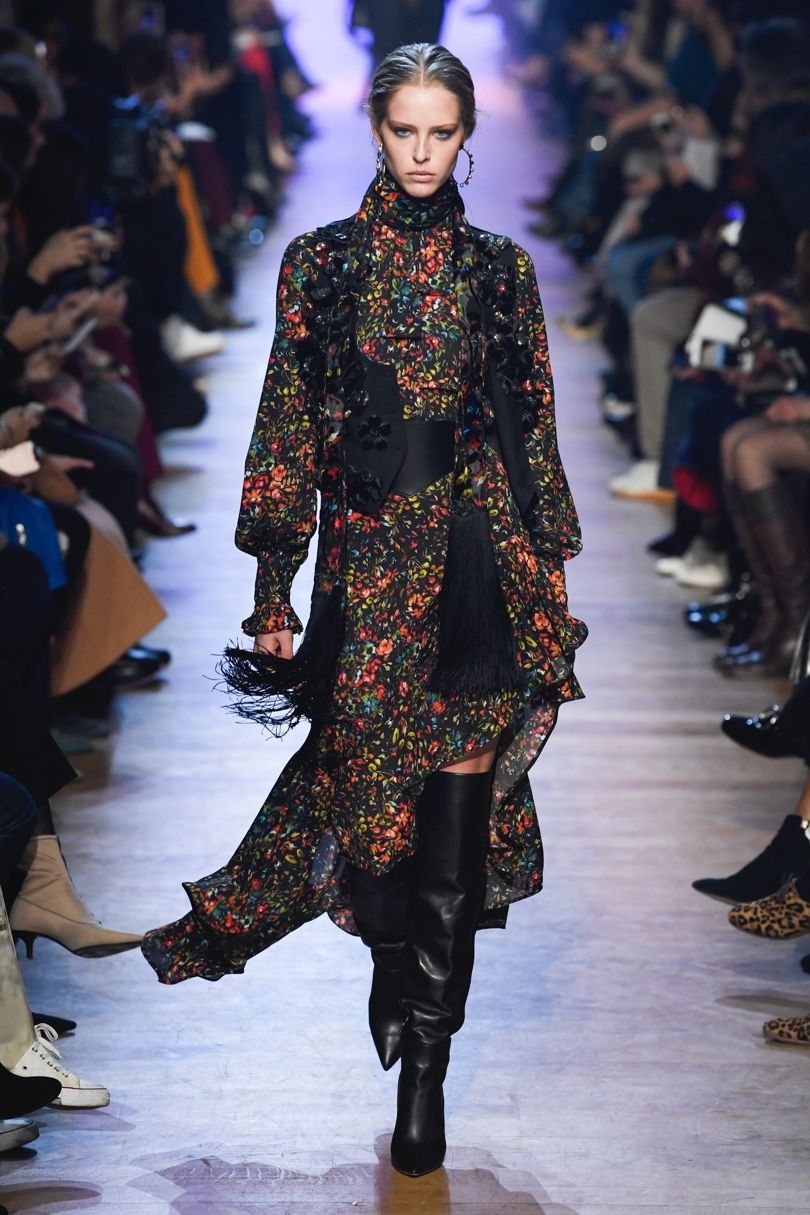 The creeping darkness caught the mood of the moment in an insecure world. So it was a smart move by the designer to keep the focus on delicate craftsmanship while cutting down on exposure of flesh, even though there was a graceful focus on lace. Parts of the show had an almost Dickensian gloom, with its fluffy black-feather decoration and the occasional trilby hat. But the Elie Saab gilded monogram shone a ray of light. 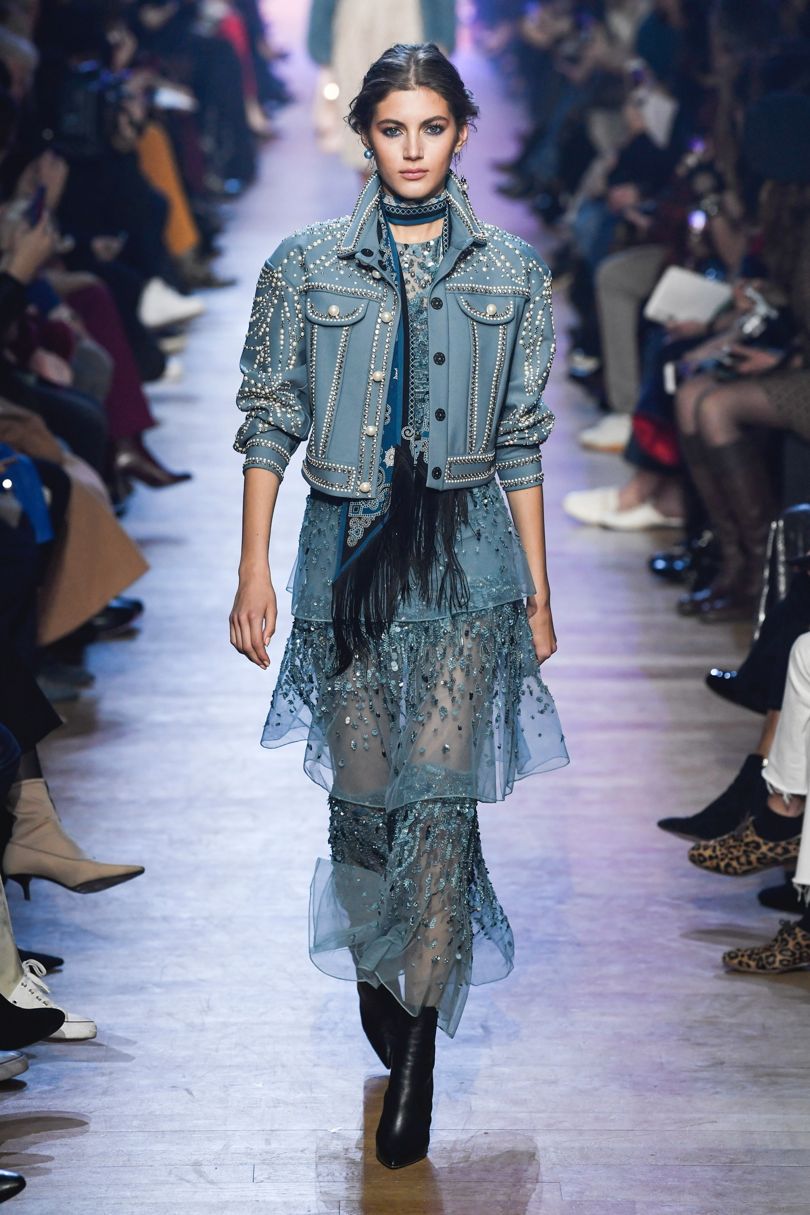 Sacai: A unique mix and match

The concept of patchwork has been around for centuries, always with a down-home look. But a decade ago, Chitose Abe took a different approach for her Japanese brand, Sacai, making clothes with a mismatching front and back. This season there was another step forward, significantly with some unmatched shoes, such as a pair of bootees, either plain or with zebra or leopard prints. 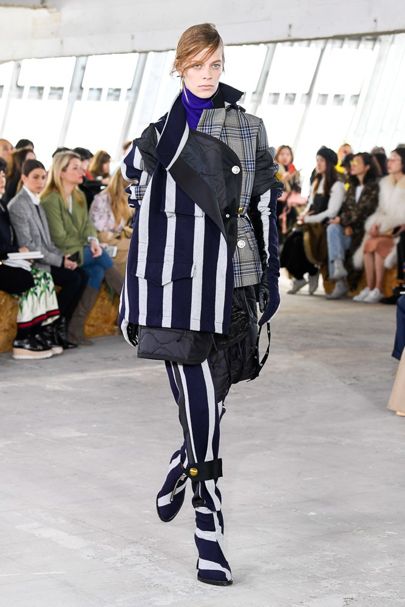 The mix and match was vertical, bringing two elements such as uniform stripes and mannish checks into a formal coat. The crispness of cut and shape made the collection powerful, but also whimsical, when a pattern of eagles seemed to be knitted on a long dress. But it was the sharpness of geometry – perhaps as just three different blue stripes on a stiff white cotton dress – that made the Sacai look unique. The vision and craftsmanship moved beyond the ‘pieces of a puzzle’ concept – as found at Vetements or, before that, Martin Margiela. Chitose Abe is a true original. 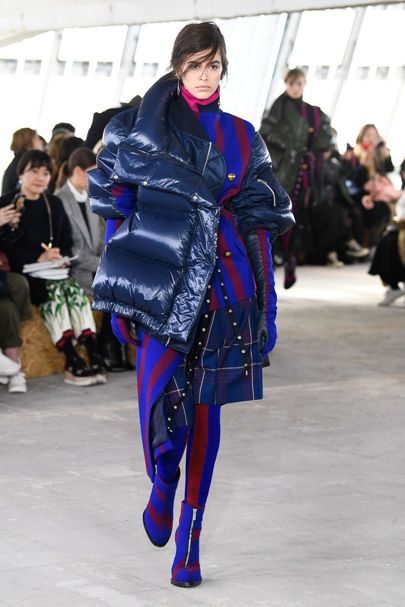 The enigmatic words that the Japanese Comme des Garçons group comes up with each season are noted for their inscrutable meaning. But the explanation that Junya Watanabe put forward seemed clear enough: “No theme,” announced the group’s President and CEO, Adrian Joffe. And so it was, as oversize jackets came out, forming a triangular silhouette over floral leggings, with the pattern looking like faded country-house curtains. 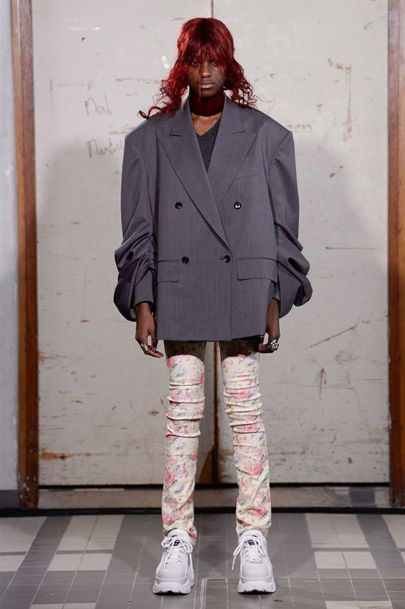 But even if those colourful stockings were the core of the collection, there was other body language, from perfectly tailored coats in typical mannish checks to mildly oversize jackets with more of those florals on long skirts. Was there a meaning in this balance of masculine – a double-breasted tailored coat – and feminine – roses blooming on a girly, off-the-shoulder dress? Were elements of the outfits, apparently fused together, really made like that? I interpreted the collection as saying that sexuality is no longer defined by the way we dress. And that the clothes were both pretty and purposeful. Whatever the non-message, these appealing looks will surely sell well. 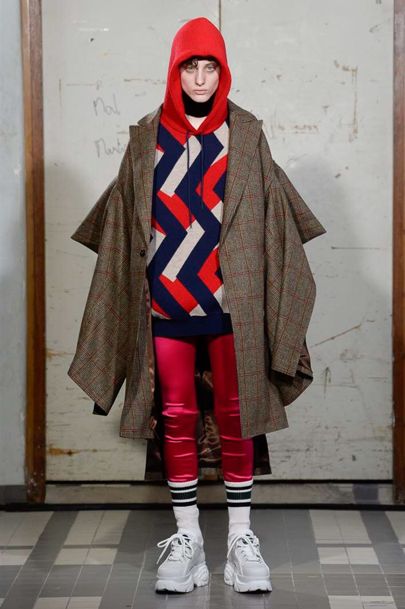