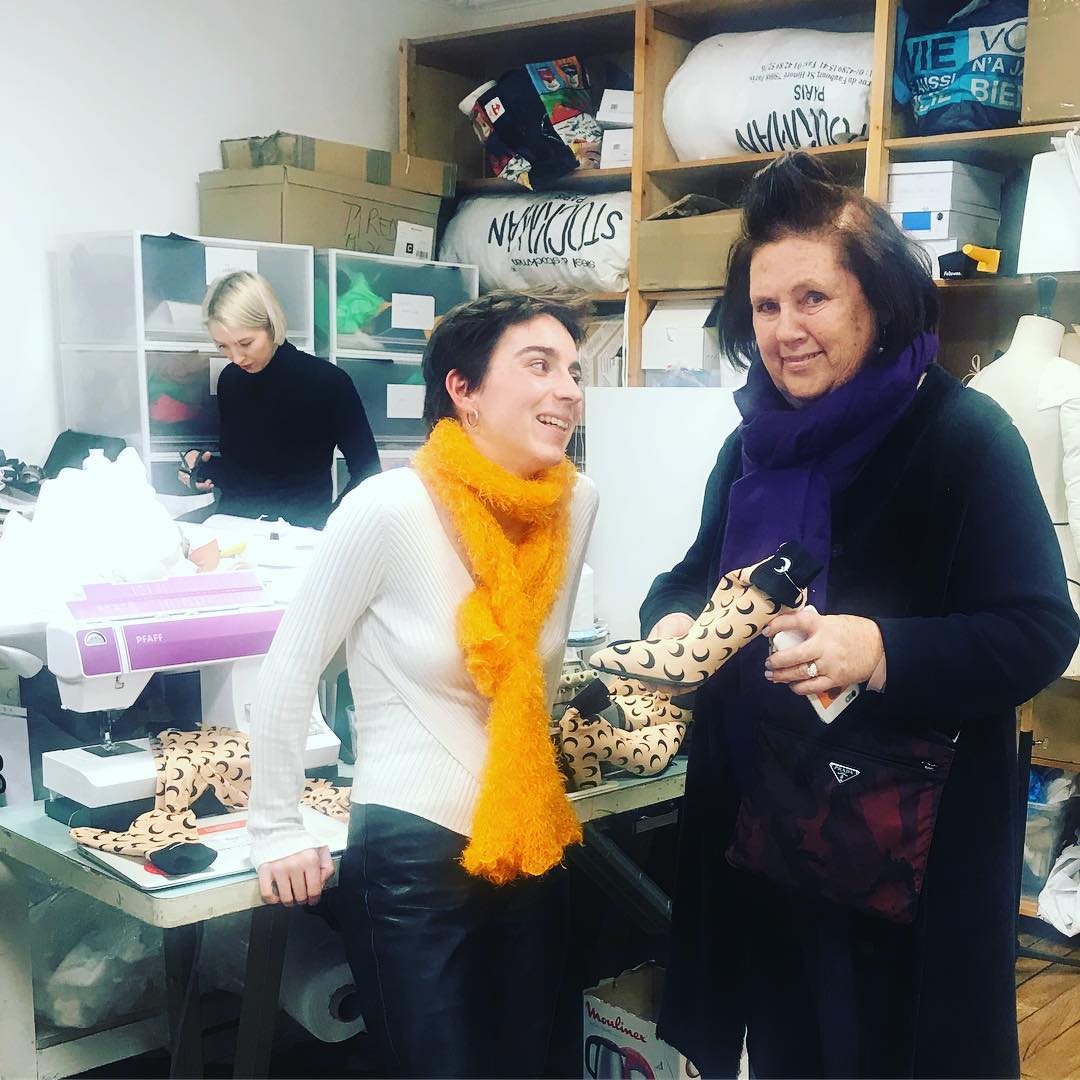 A curvy bodysuit, a net of crescent moons, and silk scarves lapping the legs… After reviewing some 100 shows in four different cities for the Autumn/Winter 2018 season, the one that has lodged in my memory is Marine Serre.

Her meld of futuristic, body-conscious clothes with nuances of Arabia caught the spirit of our times in a delicate but profound way.

To get to know her better, I went to meet the elfin designer in her studio in Paris’ traditional garment district. The two packed rooms, overflowing with fabric, crescent-moon boots, and a mood board of drawings, must have seemed generous to Marine, 26, in comparison to working from her one-room apartment. The expanded space was the fruit of winning the €300,000 LVMH Prize in 2017.

With just three weeks to go before her first show – which was held in a choreographer’s rehearsal area on the outskirts of Paris – the designer told me that its title would be “Manic Soul Machine”. The “Manic” element was for the crazy speed with which she has gone from fashion intern to lauded designer; “Soul” for the emotion coming from her heart; and “Machine” for the way she now has to churn things out. 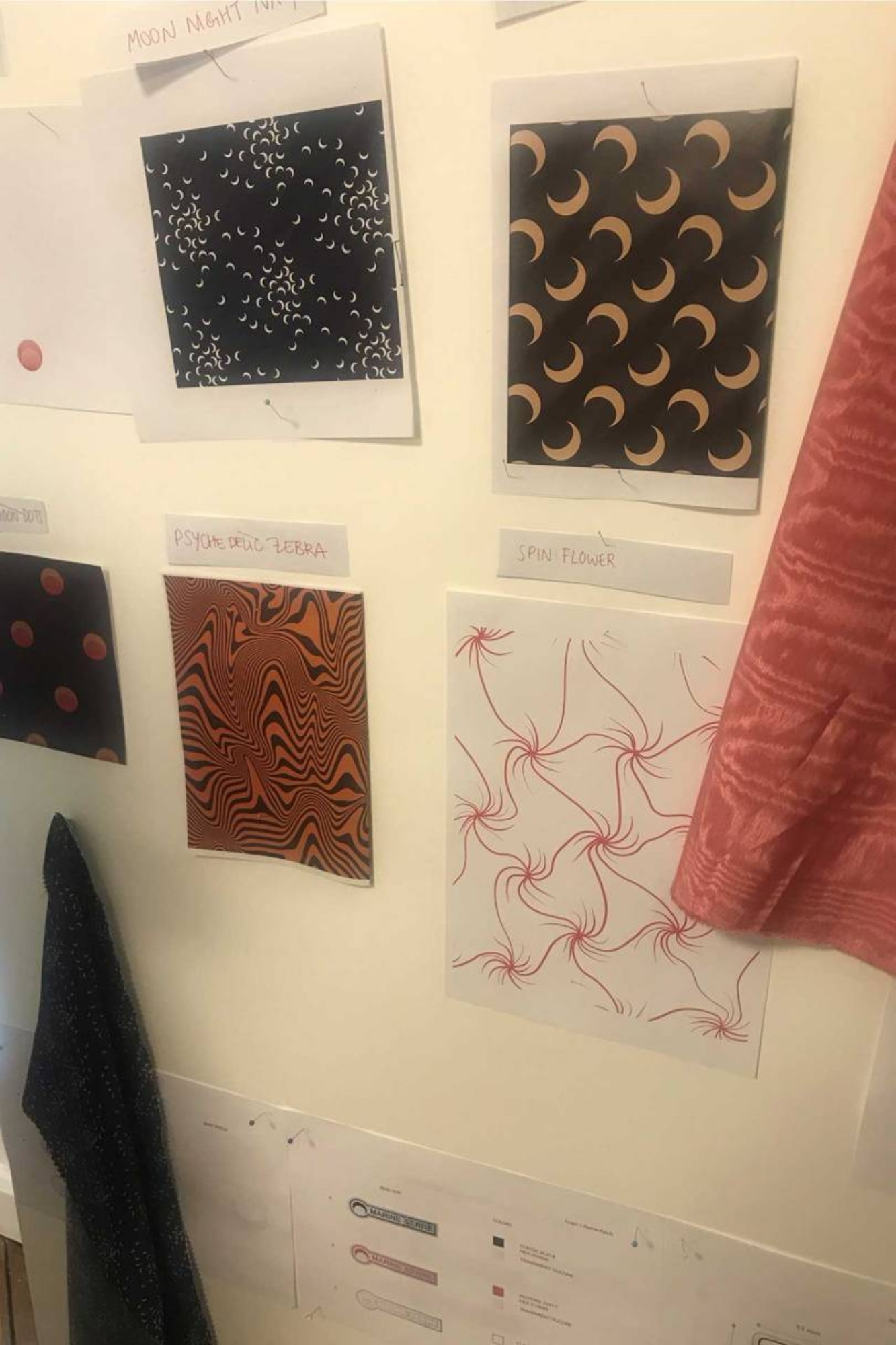 She described the upcoming collection to me. “The first part is outerwear – protective garments that we all need. Then there is a lot of normality,” she explained. “But even if it is an everyday garment, I want it to be desirable. Then the last, imaginary part – the dream that we are all attached to – is of things hanging and floating, a bit like a Flemish primitive painting, inspired from the time that I was living in Brussels.”

I saw that triptych vision come to life in the show itself, the models crisscrossing the pillared space. The first looks were city sportswear with a futuristic touch. That meant tautly-tailored jackets; slim, sporty shorts; and stretch leggings with the crescent-moon print. Then came basic outerwear, cut on a body-conscious curve, such as a leather jacket stitched around the bosoms. Add a transparent, sustainable Lycra coat; a trouser suit in a silken lilac; and ultra-practical accessories, many embedded in a jacket with a bottle of water or a pen nestling in a specially created space.

Finally came the scarf outfits – each unique – the patterned fabric draped to offer a combination of energy, sexuality and grace, and each made as an original, upcycled piece.

Throughout, there was the crescent moon, born of a desire to embrace this classic symbol of the Orient at a time when Islamist attacks in Paris and Brussels have sent shudders of fear through Europe. That moon, as a transparent, mesh face cover or just as a printed pattern, has become an instant symbol for the designer since her earliest work.

The Autumn/Winter 2018 show seemed so profoundly thought-through for such a young creative – proof, as if it were necessary, that she deserved the awards offered last year first by the Hyères International Festival of Fashion and Photography, and then by LVMH. It was at the ceremony for the latter that I first saw her work and met the designer, with her pixie hair and determined face, as she received her prize from Rihanna.

“I am very happy that she is a woman and that she’s French,” Louis Vuitton’s executive Vice President, Delphine Arnault, said at the time, praising Marine for a “mature presentation” and suggesting that the designer had “a great future in front of her”.

The luxury group has shown great warmth towards Marine, and when they came to see the work of the candidates for this year’s LVMH Prize, both Delphine Arnault and Karl Lagerfeld hugged the designer, who came to view the upcoming talents.

Marine’s debut collection in 2017, named “Radical Call for Love”, expressed the mood at a tense moment with its futuristic sportswear in jersey mixed with the rich silks of traditional Arab garments. The way that the designer absorbed that multicultural vision into modern and wearable clothes was exceptional and, unlike many fashion prizewinners, she was immediately signed up by buyers.

“Marine is such a huge talent, I knew she would win the LVMH Prize even though she had not at that time done a proper collection. It was a major feat,” said Adrian Joffe, President and CEO of Comme des Garçons and Dover Street Market.

“I first saw Marine’s work in the window of The Broken Arm concept store in Paris and was immediately struck by the originality and strength of the clothes,” Joffe told me. “I see many things, but these few pieces from her graduate collection stuck in my head. I went to see her a few months later in a sixth-floor walk-up to a one-room apartment-cum-atelier in the 18th arrondissement. The woman behind the clothes was as intriguing.”

I saw that collection for sale at New York’s Dover Street Market last September, when the mix of 1990s-style sportswear and Arabian clothes seemed so fresh and original – something that Joffe felt too.

“Marine has a strong, clear vision, gentle but powerful – a great combination,” he said. “We have worked with her ever since for all the Dover Street Markets, including getting her to design installations, which again were simple but very creative and beautiful.”

Marine Serre was born and raised in a small village in Corrèze, the mountainous spine of south-western France. “It was really green, there was a lot of water, an old stone house – not a lot of people or fashion,” the designer said, describing her childhood with her sister Justine, who is helping to build the business.

When she was 14, Marine left home for school near Limoges, where she was first addicted to tennis and later to art. Then she went south to begin her fashion studies in Marseilles, itself a centre of conflict between French residents and Arab immigrants. Marine then went to La Cambre, the renowned fashion, architecture and visual arts school in Brussels, where she learned to communicate in English from her Dutch boyfriend. “The training was based on a do-it-yourself approach and I think that really shapes you,” she said.

From then onward, the pace of the designer’s progress was manic, indeed. She moved from a three-month internship in London at Alexander McQueen (soon after the British designer’s suicide) to working in Paris – first at Maison Martin Margiela (when the head designer was Matthieu Blazy, now at Calvin Klein), then an internship at Dior and another at Balenciaga under Demna Gvasalia.

“It’s all been like a huge train, and I really wanted to stay connected to reality,” Marine confided. “I’m working hard to stay there because it’s going so quickly that you lose track. So I try to see my friends, my family, and go back home to the countryside.”

There is another aspect to the designer’s work that I admire: her belief in sustainability. “I don’t want to make a garment that you know is going to be thrown away in two years,” she said. “You see so much in the bin today. Maybe talent is making a garment out of basically nothing. I start working with an old chemise and try to make it look feminine and not like it came out of the garbage – but futuristic. Basically, I want people to see it as vintage, but also that it is a beautiful piece.”

The urge for a radical but authentic reality shows up in so many ways in her collections, not least the prominent pockets – a daring move in a world where the handbag is queen. But the Marine Serre vision is not about fashion now. It is, as she printed on some of her designs, “FUTUREWEAR”. Or, as she told me in another way, “Futurewear is now.”