In Portuguese, we have a saying that goes: “From Spain, neither good winds nor good marriage.” Though we must give it to them… Sayings like this one are very quickly established in our language, so critical of nuestros hermanos, almost making us forget that it was that (good) wind that brought us the most well-hidden pearl in Fashion: the teachings of what makes the look of a perfect invitee. 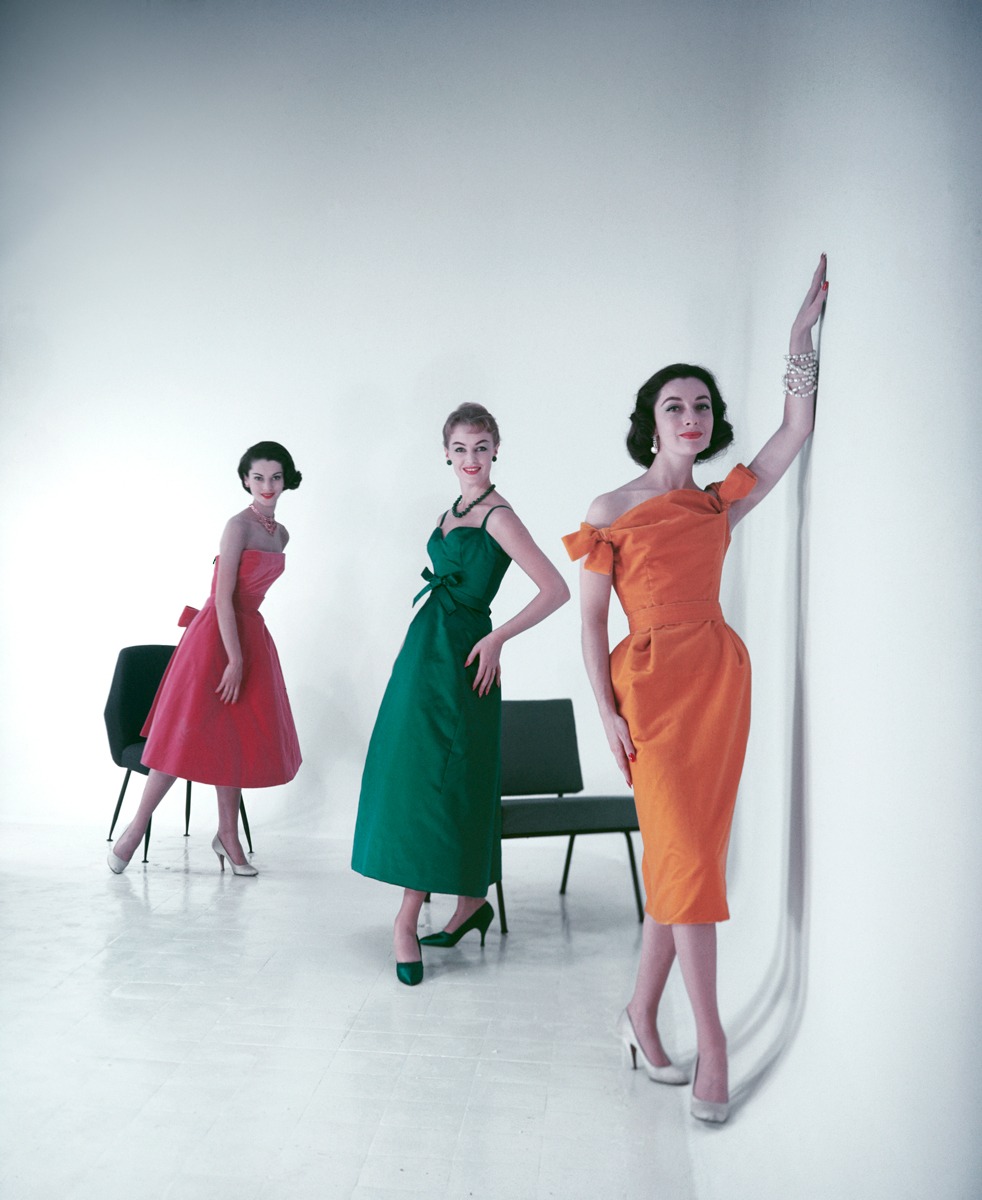 The topic of this article has nothing to do with meteorological conditions, but we could say it has something to do with wedding celebrations. Is there a bigger form of fantasy than that a good wedding? The potential ironical tone of this question is left to the reader’s discretion. The scenic setup, the characteristic intimacy of a big party, it all entails different levels of strain on guests’ wardrobes. Yes, because as guests, the conditions, restrictions, traditions, and particular trends that come along with any form of the event are of such magnitude, that the market itself had no other choice but to create a response to this demand. The “main characters” of these moments may rejoice in the fortune that is having only to live them to the fullest, with no other concerns for minor details – those are reserved for the invitees, whose job is to decipher them and build the fantasy. The social calendar has evolved to the point that we’re no longer only talking about the couple of weddings per year we had to factor in, during the heatwaves of July, in a farmhouse lost in the crossroads of the suburbs, because the bride’s parents live there, and the string quartet charges absurd fees for each kilometer of additional displacements. We’re talking about all the proms, the sweet-something parties (from the 16th birthday onwards almost everything is fair-game), the christenings and bar mitzvah’s, the graduation ceremonies, the bachelor (and bachelorette) hoedowns, and everything else in between. This exponential trajectory of pretexts we find to celebrate any and everything follows a theme we explored thoroughly a couple of issues back about the power, and duty, those dress codes have in backing up the storytelling. The premise implicit to what we choose to wear as guests denotes a subliminal push and pull game juggling various concerns simultaneously, especially in order to avoid the infamous faux-pas: wearing black or white to weddings, wearing a hat when attending ceremonies that start after 16h in the afternoon, short dresses to a black-tie event, uncovered shoulders for a religious ceremony, linen to a winter function… The list of possibilities is frighteningly long. Naturally, to elude further “pre-stroke” situations of social awkwardness, Fashion has responded with the explosion of brands, blogs, and propositions we see today, aiming at tackling the indecision of what we should wear for the next blockage in our agendas.

Who has never been tempted, faced with an invitation for a celebration of this sort, to go through the pages of one of those magazines? The reader knows what I’m talking about… Those we must refer to as a guilty pleasure every time we’re caught holding them under our arm on a Sunday afternoon. Those we secretly prefer to that classic we can’t seem to finish, those our mother adores. I suspect this fatal attraction has something to do with the not-so-little nervous sweat we break upon the realization that some of our safe options are out of reach – the little black dress can’t get us out of everything, regardless of how much we try – but it’s imperative we look at the situation as an opportunity instead of a fatality. It was exactly what Sandra Majada, better known as Invitada Perfecta on social media (@invitada_perfecta) has decided to do. Her handle says it all and her mission is simple: to act as a blank canvas for the brands that address the thirst for inspiration of her thousands of followers, including platforms like Instagram, where she gathers more than half a million. It becomes obvious that, to a certain degree, we all suffer from the same chronological pathology that is having a wardrobe filled with clothes and nothing to wear, particularly for special occasions. For Sandra Majada, with education in Publicity and Public Relations, the trajectory she has drawn over the years thanks to her online presence, mainly the blog she signs under the same pseudonym, is the result of the love she has for parties, events, and weddings – and, of course, for the liberty that Fashion allows her when it’s time to celebrate those moments. Between the different types of invitadas we find online, such as Margarita de Guzmán Luque (@invitadaideal), or the page of Susana Tornero (@ynosfuimosdeboda), we could be led to think that the content they produce is resumed to influencer-like pictures showing multitudes of dresses, and that’s it. And we would be gravely mistaken: the proposals are detailed, oftentimes in synch with important local traditions (such as the Feira of Sevilla), and stretch between christenings in summer mornings, sunset weddings, or prom soirées – proportionally to the number of brands willing to collaborate with this type of online outlet that has become the Google search for all the guests feeling lost when it comes to dress codes. On the Spanish market alone, the offer of cures for this problem are nearly infinite, and they come tailored to any sense of taste under the sun: Apparentia, Lola Li, See Iou, Miphai, Lady Pipa… The primary requisite? The label “Made in Spain” and lots, lots of color.

Let’s hold our horses for a minute. It’s also necessary to account for yet another highly relevant point around this subject: the royals. It might sound silly, but it’s not at all random that it is in Spain that most of this market is booming. The loyalty to the etiquette that has been dictated for decades (centuries?) by royal traditions remains preserved by the small number of families and entities that persist, in only a handful of European countries, and that live under a strict code of conduct – and of dress – dictating the right from wrong when it comes to any social interaction. That being said, we’re discussing environments that started by providing, first and foremost, a limitless source of inspiration: there is no other calendar in the world with more open tabs than the one of a royal family, where every wardrobe decision is thoroughly analyzed, not only by prying subjects’ eyes, but by the press, the brands, and an entire industry ready to jump on the next it-trend. But this “royalty” has also suffered mutations, and from these contexts, we saw the appearance of sublayers of influence that have awakened a nearly morbid sense of curiosity in the masses. Certain personalities and celebrities (but not only) with the ability to steal every bit of attention, even as plus ones. The Beckhams, in England, are a good example of precisely that. Being that they represent the closest thing to royalty that modern society has defined, a long time has passed since they were last able to go unnoticed as mere guests during any social appearances within their social circles. One could argue the dress that Victoria Beckham wore to the wedding of her oldest son, Brooklyn, caused more of a stir than the bride’s, and that David Beckham’s slim fitted suit stole the spotlight at the royal wedding of Meghan Markle and Prince Harry, in 2018. From the United States, we feel the reach of surnames such as Clooney and Fürstenberg, in Spain, from Sara Carbonero to the Infanta Sofía and Princess Leonor, there is almost no ink left on anyone’s pen to incur in such analysis.

What differentiates this highly specific (but almost all-encompassing) side of the market is one detail that comes that question circling around the head of any reader around this time in the text: why can’t a dress from a “normal” brand, meaning, not this specialized, be enough? It can, of course. It is, indeed, a great option most times. On purpose, the words used before were “most times” and not “always”, because sitting at the top of the pyramid of potential horror that are the various stages of this experience as a trying-to-be-perfect-invitee, is one thing, and one thing only: showing up with the same dress, or a suit, or whatever, as another guest. We could be tempted to think that would never happen, after all, the theory of probabilities tells us that, given the size of the market, the chances are almost null. But not zero – especially considering that the entire world is being catered by a few other selected brands, also Spanish, but whose labels very rarely read “Made in Spain”… Cue for the wonderful market niches, the small players that bet on their craft and creativity to create their own identity, with proposals that allow us to explore the trends of each season, always with a sharp focus on dressing up the fantasy of moments that stay imprinted in our memory. It’s important to point out yet another facet of common sense around this topic. Unless we’re talking about a wedding gown (and even then, we reserve it the possibility either way), it wouldn’t be exactly sustainable, not for the planet nor for our wardrobes, to hoarder suits and dresses every time we’re invited to something. It’s not because a dress is designed with a specific purpose that that should be its unique destiny and utility – these pieces in our closet denoted as “for special occasions” don’t lose any of their magic per wear. We give you Vogue’s word.

On the other hand, the emotional connection we can develop with a garment designed for one of these moments has the power to overcome time and space themselves. A few months back, when undergoing an expedition to the depths of my closet, I found two bags I had no recollection of – one of the symptoms of chronic disorganization, but that allows for a few surprises, once in a while. I opened one of them and could immediately feel the tears building up in the corner of my eyes, testing the limits of my composure: it was the dress I had worn to a family wedding, many years ago. My mother opened the second one, somewhat perplexed by my discoveries, from where she took out the dress she had worn for the same occasion. It was a cherry shade of pink, boat décolletage, and hem above the knee, with a short bolero jacket made from the same fabric, with an appliqué in the shape of a camelia on the lapel. It could have been designed today by one of the brands I mentioned before, caught in between the tight left and right turns of Fashion, like a stopped watch bound to be right twice a day – perhaps even more so, when we’re talking about a Jackie O. inspired cut. She held the ensemble in front of her, stopped for a second, and tried it on. I asked where she was going, all dressed up. She looked over at me serenely and said: “Me? I’m going to work.” I don’t know if we were the perfect guests at that wedding, nor can I point out the decisive factor to earn such denomination, but the fantasy, it seems to linger on forever, at least while clothes are able to encapsulate the memory of happy moments – even the one’s of others, that we make ours.