There is a hotel in Mykonos, one of the most emblematic Greek islands, where the notion of time has long been suspended. Here, nothing happens according to the rules of the world - because here, almost anything is possible. Oblivious to the prohibitions and obstacles of everyday life, this is a place that prefers, instead, to live of dreams and imagination. Its name is spelled softly, like a wind ballad: The Wild Hotel. 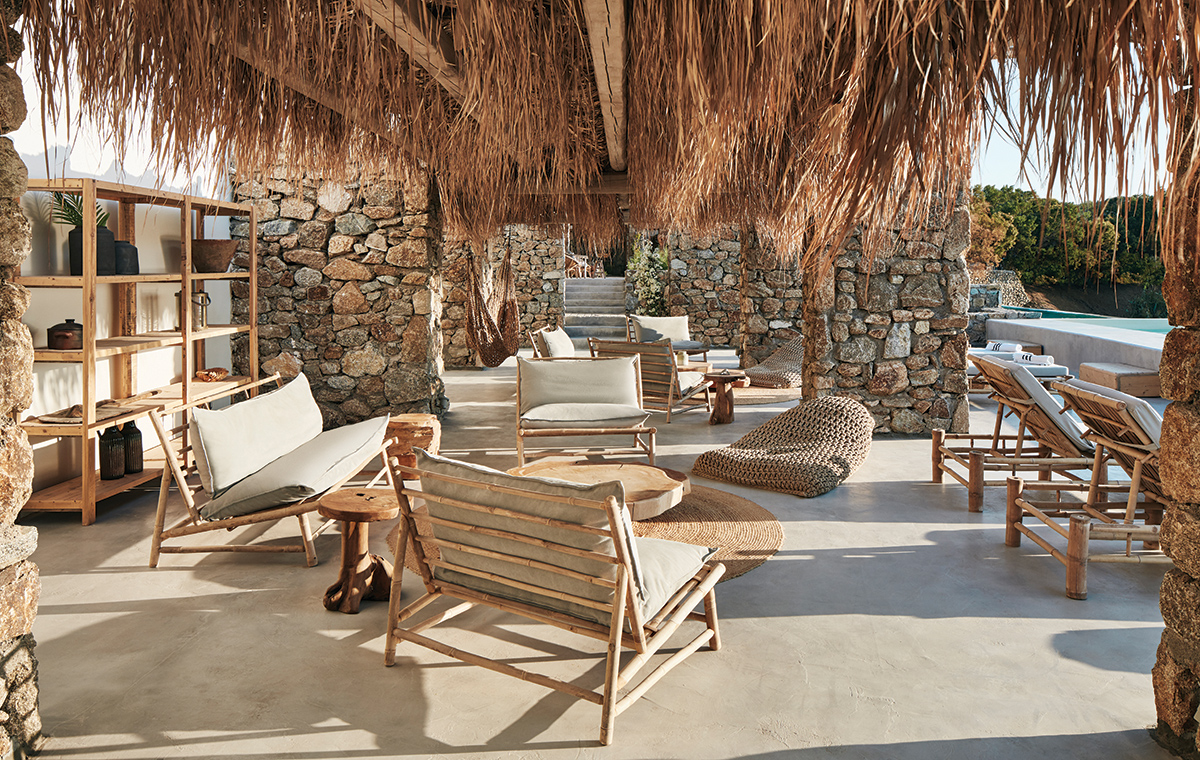 “It’s a bliss.”Trying to translate this expression is more or less like trying to pass “saudade” into another language. One always falls short. Because “bliss” is much more than happiness, it is much more than blessing, it is much more than that delight, it is much more than contentment. In fact, “bliss” is a mix of all of that, and maybe even more than that, since “bliss” contains, in itself, a superlative feeling of well-being. To spend a few days at The Wild Hotel it is precisely this: "It’s a bliss." That fact is not unrelated to its location: Kalafatis, one of the most privileged locations of Mykonos, which allows to the most attentive tourist to discover such special features like deserted and secluded beaches - in everything similar to the small cove that bathes The Wild Hotel, and in everything different, because they lack its raw and wild beauty, sculpted by the hands of Nature; because they lack the serene contrast between a five-star hideaway and an overwhelming Cycladic landscape; because, despite having the harmony of the Aegean Sea, its infinitely blue, they lack the charisma of a hotel that is, above all, a place of rest, of freedom, of serenity. Built by the Interni group, The Wild Hotel is not a labor of chance - it is a labor of destiny. Its location is one of its greatest assets. It’s what makes us say, from the moment we pass the small entrance gate: “It’s a bliss.” This natural amphitheater, an open-sky through which the most beautiful stars of all the heavens, real and imaginary, cross each night, imposes itself on a cliff that ends in one of the most beautiful beaches of Kalafatis, overlooking a stream that was once home to the most fearless fishermen in Mykonos, known as “the wild ones.” Hence the name: The Wild Hotel. And everyone who goes there will have to be, in some way, a little wild.

And so we were. In September 2020, for five days, we set aside the norms and prejudices of worldly life, which continues at a frightening speed, and agreed to stop in time. We arrived at The Wild Hotel and were welcomed by the joy of a staff that works for love. Here, no desire is unlikely. If the 70 steps of the winding staircase that leads to the beach seem too scary, someone will end up saying, "I can take you on my lap." And, even refusing the gesture - either out of modesty or because we want to experience the adrenaline of knowing, by ourselves, the stones that lead to paradise - we know that help would be possible. Right after the lobby, which, it should be stressed, is not a conventional lobby, it’s a place where people from all over the world meet, all of them looking, in these 40 rooms, suites and villas, for an escape from everyday life, our eyes are faced with an idyllic setting: an infinity pool that looks like it was taken from a postcard, some sun loungers that invite you to nap, enjoy the sun, and that dolce fare niente that we associate with holidays, small bamboo tables and impressive straw hats, that give us the necessary shade when the thermometer reaches higher values. In short, a discreet, polished luxury that does not scream ostentation or arrogance. Here, the charm comes from both the color of the bougainvillea and the eclectic mix of decoration, made from sophisticated design pieces, handcrafted objects or antiques. This extends to the rooms, where cotton and linen fabrics coexist with leather, soft, and wicker baskets share prominence with modern music columns. But let's go back. Still overwhelmed with what our eyes see, we turn left to The Tavern, a restaurant with the best tasca spirit, where traditional cuisine merges with the most contemporary flavors. They call it “slow food”, we prefer to call it “food made with love”, because each dish, made with the freshest ingredients, carries centuries of history, a history of affections, restless souls, challenges, of great creations. Can we say the same about drinks? We can, and we must. A mojito made at The Wild Hotel is not just a mojito. If you are lucky enough to land in Mykonos heading for this Eden, ask for one. You will not regret it.

Here, all the elements come together to provide the guest with an unforgettable experience. Feeling the sand on tiptoe, diving into the crystal-clear waters of the sea, watching the sunset, listening to the sound of birds, early in the morning, feeling the breeze of hot nights... This is the Mykonos that does not come in the tour guides, it is untouched, mesmerizing, beautiful Mykonos. It is the Mykonos that free spirits have fallen in love with for centuries, and to which they always return. And the Mykonos that can only be accessed through roads with a thousand curves, because its secrets are too well kept and privacy is something untouchable, that has no currency. It is Mykonos that carries itself in the heart even after we check out of The Wild Hotel. It is possible that we will not return to this unique place, without parallel. But the memories, these, will stay forever. For five days, everything seemed possible. As Mae West, a great observer of life's pleasures, would say, “They say you only live once, but if you do it right, once is enough.” If you want to know what she was talking about, book yourself a stay at The Wild Hotel.