English version | Staying in is the new going out

Wild animals from all over the world, unite! Quarantine is a ban, it is the worst thing that could have happened after the end of the Game of Thrones, but for a portion of the population it is just the extreme side of habits long practiced. We are not the ones who say it, there are dozens of inquiries carried out all over the world: staying in has been the new going out for years. 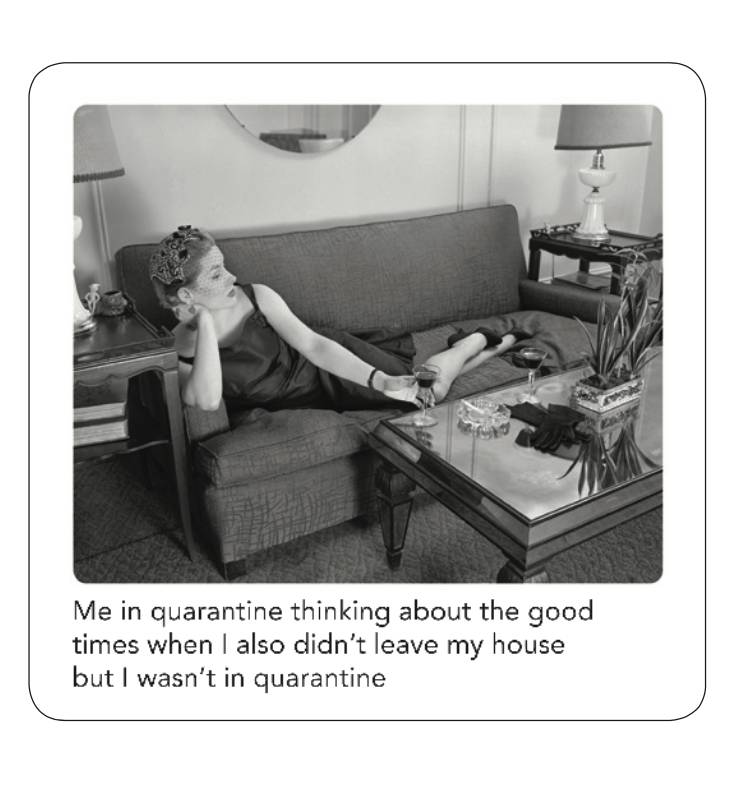 It's ten thirty in the morning. My phone, parked a few inches from the computer, vibrates with a notification. On the other side, someone who knows me too well sends a meme that sums up the mood of the past few weeks: “I can't wait for this to end to return to social isolation - on my own terms.” And then, another message. "I am a homely person, but damn, there were one or two places where I would even like to go!" Hours later, another millimetric image composed to adapt to these times of pandemic / madness / mental confusion (insert the most appropriate term): "My favorite part of social isolation is not having to think of excuses to miss social events." Shortly thereafter, and perhaps because conscience, or guilt, begins to weigh on me, I get a GIF whose content is more ... reasonable? First, we see someone visibly happy, then they start to cry. The caption is clear: “When I stay at home because I feel like it, and when I stay at home because I am forced to do it.” This virtual exchange is repeated over several days, several times a day. Humor is one of the few things we have left, now that we are confined to the (too narrow) freedom of our four walls. But ... what if a large part of us already spent a great deal of time inside these four walls, with or without the presence (scary, demonic, indecent) of the new coronavirus? Hypothetically speaking, of course.

But ... what if a large part of us, when faced with the possibility of getting into a car to run across the Príncipe Real-Cais do Sodré axis on a Friday night - a trip to last a good 45 minutes of insults and fogged windscreens - to then wait not-so-patiently until we are served, around 11 pm, in one of these trendy restaurants, where the meal will cost no less than 50 €, no right to wine, we roll our eyes and prefer to say “You know what man, I’ll go home. Tomorrow I’m going to prepare a dinner at my house, so today I want to chill.” If this were true, what would that say about our lifestyle, our habits, deep down, what would that say about us as a generation?

"Is Staying In The New Going Out?” It was this question that opened the article in The New York Times, published in April 2016 - one of the first to detect the problem - or the trend, depends on how we approach the issue. “Years ago, my co-workers and I shared the high points of ambitious urban activities before opening our laptops and pouring ourselves a tall, refreshing glass of work. [...] Currently, we answer the question with some kind of confused amnesia. Did we do anything? 'Not really', we say. 'It was very peaceful.' We frown trying to remember the main events, but nothing comes to mind. It is as if the last two days have disappeared in a narcotized and indifferent blur. A leisure blackout. We still have fun - probably? - we just don't know how it happened.” Molly Young, the journalist who wrote the article, listed the reasons for such numbness, while doing a kind of mea culpa: “The reason is obvious: we are no longer going out. And why would we, when the fascination of staying at home has reached irresistible proportions? Why risk a restaurant when we can order pre-cooked gnocchi or a Blue Apron sauté [reference to an American meal kit service with ingredients and recipes]? Why go to a bar when we can do swipe right [a term associated with dating applications, which implies a match with someone else]? Why go to a reading when we can download a podcast? Why pay $15 to watch a Marvel reissue in theaters when the premium streaming world of content is within reach? Food, entertainment, romance: basic weekend foods are now available on request. The centripetal strength of our homes has never been stronger.”

None of this means that we are alone, isolated, taken by loneliness, the author recalled, because after all, in almost every one of these homemade movements we stay permanently connected. “I sometimes enjoy these things with a boyfriend; sometimes I enjoy them with friends. Alone, I can always socialize from my cubicle - on Instagram, Twitter, Facebook, Tinder, Snapchat. All of these platforms have a way of bringing out the worst in people, it is true, but so do bars at two in the morning.” And, let's face it, with everything we know now, and for now we mean “now that we are between 30 and 40, and that the idea of ​​forever young seems increasingly difficult to put into practice, no matter how much we try to”, are we still willing to go to bars at two in the morning? Definitely not. That is how we got to 2020, the year when half the planet urgently wants to leave home, and the other half does too – and soon after will be (running) back home.

A few months and thousands of tweets later, the first sequels came to Young's discovery. The first took on viral proportions. It had the title Millennials don't deserve NYC and was released on June 8, 2016 in the New York Post, where those born between the 9/11 attacks and the global financial crisis were accused of being “the best generation ... of couch potatoes"; the second one was published in the American edition of Vice, on the 12th of the same month, entitled Millennials have discovered going out sucks, and summarized it as follows: “young people are the new old.” Shared to the point of exhaustion, these articles got the seal of approval from readers (of almost all age groups, which is curious), who related to the need to use the weekend to do nothing at all – no guilt whatsoever. In no time, consultancy companies rolled up their sleeves and set up megalomaniacal polls to translate all of this into numbers. The results were clear: between 73% to 75% of millennials prefer to stay at home rather than “going out”. This does not mean that these young adults have stopped socializing. They just do it differently. Many prefer to "go out" only at special occasions and, when they do, they opt for cultural sites, such as cinemas and theaters, or restaurants. Nightclubs, which until the end of the 2000s were the destination of choice for any noteworthy weekend, are beginning to be replaced by Netflix and chill - who enjoys JOMO, or the joy of missing out.

Night outs are increasingly rare and allocated for events that deserve the effort of a sleepless night – like a renowned DJ or a friend's birthday party. And if it is possible to say with some certainty that part of these changes are due to the greater awareness concerning the harmful effects that the old forms of socialization had on the health of each one of us - leaving the streets of Bairro Alto at six in the morning, three nights a week, causes real collateral damage, any of us who did it can show it in a selfie with poor lighting - there is no escape from the influence, in recent years, of a series of ideologies that proclaim a greater awareness of the self: practices such as wellness, mindfulness, esotericism, as well as the increasing time dedicated to some type of exercise, help to understand that the flâneur from other times, who let himself be seduced by the constant affair of the surprises he found in his wandering through the streets, has no place in today's reality. All of this very intertwined with an unstable economy, which taught the youngsters the value of money in a way they were unable to instill in their parents - why spend six euros on a beer in the trendy bar, if we can pay one euro for it in the supermarket and drink it comfortably indoors, with our friends? - and there it is, the perfect stir-fry for one of the many soirées spent on the living room sofa.

As with all postmodern phenomena, this paradigm may or may not be linked to the recent wave of not-so-anonymous introverts (socially awkward people), who have no shame of coming out as they are anymore and who now scream, loud and clear, that they're not that good at dealing with... people. They are the ones who, many times, are at the source of the memes with which we opened this text - is the author of these lines a hooded introvert? Well, that’s not your business. It would be premature to want to define someone on the basis of her seemingly reduced capacity for socialization - but it is also no less reasonable to make the mistake of confusing shyness with introversion. The bases of these personality theories, popularized by Carl Jung, are complex enough to deserve discussion (someone will do it for us, in a suitable place), so it is good to remember the words of the psychologist regarding this gray area that is between those at one extreme and the other: “There is no one who is purely introverted or extroverted. Such a person would be hospitalized in an asylum”.

That is why it makes more sense to assume that the explosion in sharing this common trait, this characteristic, is probably a sign of the times rather than the auscultation of a chronic pathology. We got used to sharing our photos, our fears, it would only be a matter of time before we share our crazes: we like to be on the street, yes, but we also like to stay at home, especially when we are not forced to; it can be really awesome to stay glued to the sofa 48 hours in a row, zombie mode on, but this sofa only fascinates us because we can, at any time, abandon it, leave it; it's nice to have moments of peace and reflection, with no one around - we need this like we need air to breathe - and yet you don't have to be a scientist to know that those moments lose their raison d'être if there are no people, if there is no contact with one other. The abysmal difference between the two, lies in the possibility of choosing what to do - the free will that permeates every decision of ours. That is why we propose a redrafting of this trend: staying in is the new going out - after going out. Or, if you may, a kind of "I go, but I’ll be right back". In any case, the important thing is to go. After that, we’ll see.