What to see, what to read, what to do. 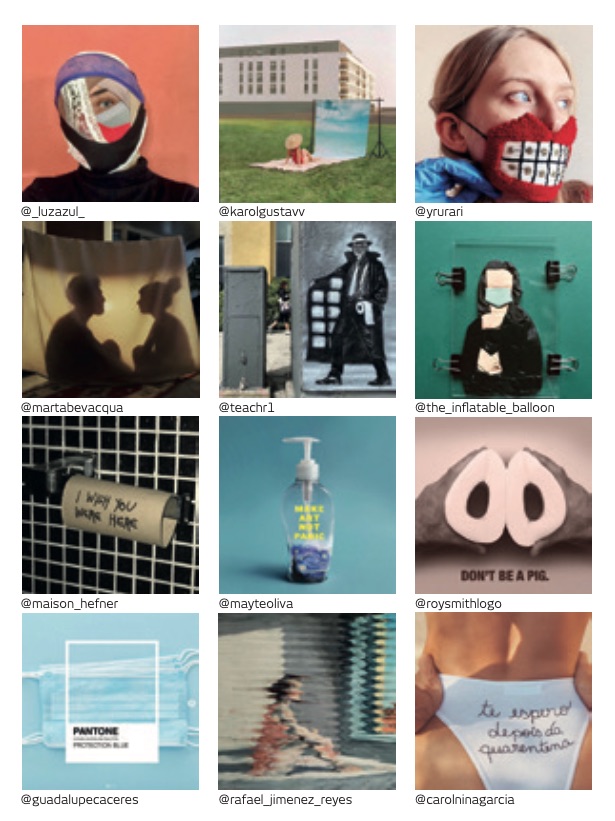 The books we choose to read, or flip through, during uncertain times, can also alert how we understand, and face, adversity. These are some suggestions to have around, now and always.

When faced with the impossibility of going out on the street as in the past, social media is the obvious sweet escape to a café, a trip to the cinema or a visit to an exhibition. This is precisely where the Covid Art Museum, an Instagram account totally dedicated to art in times of cholera, comes in.

It is, most likely, the first museum born in quarantine. It has no physical existence, nor would it have made sense when half the world is still under strong measures of social distance, but it exists in this universe where everything lasts ad eternum: the Internet. The name is Covid Art Museum and, in the first days of May, the closing date of this issue, it had more than 67 thousand followers - a number that grows every sixty minutes, because @covidartmuseum is one of the most refreshing cultural news of the last months. When most news related to the new coronavirus have a negative tone, it is a breath of fresh air to see a gallery open to everyone who wants to look at the pandemic in another way - from a creative point of view. Since time immemorial, art has been a powerful tool in times of crisis. But in the 21st century, when the world seems to have collapsed at the expense of an invisible and apparently indestructible enemy, it is just as or more relevant to use it to spend time. To survive. It was with this in mind that, on March 19, the Covid Art Museum was born, a virtual estate that gathers hundreds of works - from unpublished images to adaptations of classics - inspired by the outbreak of COVID-19. Behind the idea are Irene Llorca, José Guerrero and Emma Calvo, a trio of advertisers from Barcelona. "We realized that many friends were sharing artistic publications, were seizing the confinement to create everything from poems to illustrations", they told the Spanish issue of Vogue. “But it wasn't just in our circle. Many people were producing works inspired by the pandemic and its social consequences. That's when we thought it was worth compiling them in one place so they wouldn't get lost. A visual testimony of all the art that was emerging at the time.” We don't know what will happen to the world after this nightmare ends, but when it does, we will always have this file to remember that man's imagination knows no limits. Not even when circumstances seem to be averse to the creation of any kind of masterpiece.

"Without music, life would be a mistake," Friedrich Nietzsche said. The German philosopher may have been wrong about many things, but not about music. It, like few other things, has the ability to make us dream - and, often, save us. It, like few other things, is probably one of the greatest symbols of unity - and strength. Perhaps that is why, in this quarantine, the best surprises come from voices that we have longed to hear again.

The light at the end of the tunnel is not a train: it is a wonderful, and surprising, revelation. Mínima Luz is the first record of originals by Três Tristes Tigres since 1998, that is, since the world, and Portuguese music, were very different from what they are now. Alexandre Soares (ex-GNR) and Ana Deus (ex-Ban) had more than enough time to reflect on how they wanted to return to the main arena of songs - where they always moved with a certain freedom. Now they are even more free, and they mix the poetry of yesteryear with modular synthesizers and granular samplers that make up a fuller, more intense sound. A sound that screams more future.

"Together we are stronger." In the last few weeks, the quote has been repeated until exhaustion, but there are those who repeat it, nonstop, in their daily lives. Dino D’Santiago soon got used to singing the whole world - a world that can begin in Cape Verde or on the Sintra Line, as long as he believes, and claims, his story. Kriola, someone wrote, is “A record of revolution and cultural emancipation.” So it is. Accompanied by names like Branko, Kalaf Epalanga, Djodje Almeida, Julinho KSD or Vado MKA, the author of the celebrated hit Nova Lisboa presents a series of engaging songs, joined by electronic filters and rhythms such as batuque or funaná. To celebrate life, without borders.

After an absence of seven years, here is the longed-for return of Julian Casablancas and company. We still haven’t pressed play and two things are already visible: the artwork of the album cover, a painting by the author by Jean-Michel Basquiat, Bird on Money, and its title, The New Abnormal - do the Strokes want to play with the current state of the world, which is far from normal? The starter singles, At The Door and Bad Decisions would serve to pique the curiosity of those who would be in front of the New York collective at the NOS Alive festival. That being impossible, we need to listen to these nine songs until we get tired. #NotGonnaHappen.

This is something no one expected. And that’s because: a) Miss Apple has been silent for almost ten years - more specifically since The Idler Wheel, launched in 2012; b) the singer-songwriter was never one to launch the same thing over and over again be it in terms of sounds or in terms of lyrics. And here we are in 2020, with the brand new Fetch The Bolt Cutters, 13 big, huge, songs that fans (and there are many) are grateful for. There is jazz, unkempt pop, fancy arrangements, all in very agreement with Fiona’s modus operandi which is rules do not apply - the woman who doesn't know how to write bad songs.

Dan Snaith, the man behind the moniker Caribou, confessed to having more than 900 ideas for the album now released - which ended up reducing to 12 tracks. Suddenly is an album whose themes touch us closely: nature, pain, and the constant evolution of relationships with family and friends; and it's a record that constantly changes course, as if taking the rug off between each beat, disorienting our condition as listeners. We don't really know where Snaith is headed with this Suddenly, but we know that we will accompany him on this trip.

We can't wait to take refuge from other people again. On our own terms. Social distance is easy in these three sweet escapes. Two meters apart? We managed to raise the bar to kilometers.

This farm that rises in the heart of the Alto Douro Wine Region, between Pinhão and Ervedosa do Douro, could not be a better answer to relax away from crowds. The 29 rooms that make up the accommodation are distributed in seven buildings - with names as inviting as Casa Romântica, Casa do Laranjal and ... Balões? - and the surroundings extend for kilometers inhabited only by vineyards, which occupy 200 of the 400 hectares of Quinta de Ventozelo and which encourage hiking and nature walks. One of the largest and oldest Quintas do Douro (already over 500 years old), it was only in September 2019 that Ventozelo opened its doors to wine tourism and hospitality. Here, quarantine is encouraged in rooms that appeal to rest, in this “backyard” that meets the rules of social distance and includes a swimming pool to drown every sorrow, sunbeds to forget problems, grocery store with products from the Quinta and the region, so as not to lose the eating habits of the confinement, and a restaurant with a terrace so as not to lose the taste for the normality of catering. Cantina de Ventozelo, as it is called, occupies the space where workers' meals were formerly served, and promotes the traditional flavors of the Douro and Trás-os-Montes region, produced respecting their origin. Is there a better solution to follow the traveling without people motto? More info at quintadeventozelo.pt.

There is. Well, perhaps not the best solution, but equally valid and desirable. In the heart of the Serra da Estrela Natural Park lies the Casa de São Lourenço - Burel Panorama Hotel, a haven with panoramic views over the mountain, the Zêzere Glacier Valley and the village of Manteigas. Originally Pousada de São Lourenço, which opened to the public in 1948, was one of the first inns in Portugal, designed in the 1940s by the architect Rogério de Azevedo. Today, renamed and updated, it preserves its historical background, not only in the preservation of the building's history and the landscape, but also in the use of burel, locally made wool fabric, and in the reuse of the Pousada's original designs and furniture. With 17 rooms and four suites, it is a destination that excels in escape - even in the proximity: with vast views, private balconies and a garden of native species, staying away is desirable. More info at casadesaolourenco.pt.

This Sustainable and Organic Ecotourism (with a sustainable and organic focus), in the extreme south-east Algarve, neighboring the Castro Marim Nature Reserve, is not new, but it is a favorite. The 40 hectares of stone pine, cork and carob, apricot and fig, olive and orange trees serve as a backdrop for the solely six rooms and three suites built with lime, cement, wood and cork. All different, all urging rest and a return to a fuller, but simpler life - some even have outdoor patios that invite seclusion in the open. The surrounding green areas encourage nature exploring, and doing so with hosts Eglantina Monteiro and Francisco Palma Dias is adding an extra layer of privilege: the knowledge and passion with which they share local stories will make you feel closer to that land, that south, that charismatic double, without infringing the recommended social distance. If you still need to increase the distance, at 1.5 km is Praia Verde and, 4 km away, the historic village of Castro Marim. We strongly advise you not to go that far. Crossing the street is all you need to get to Haman, for a healthy bath or massage, and to the Cork Box, a covered space made of cork for moments of meditation, for example. So much and so little time? Here, time goes by more slowly and without crowds. More info at Companhiadasculturas.com.