It is the color of love, sex, life, hope, enthusiasm. It is the color of tomorrow, of the future, of adventure, of romance. It's the color of Christmas, of enchantment, sensuality, fun. Red is all of that and, on top of it, it's the fetish color of Fashion, which falls on its knees for red since the first cloth was sewn. 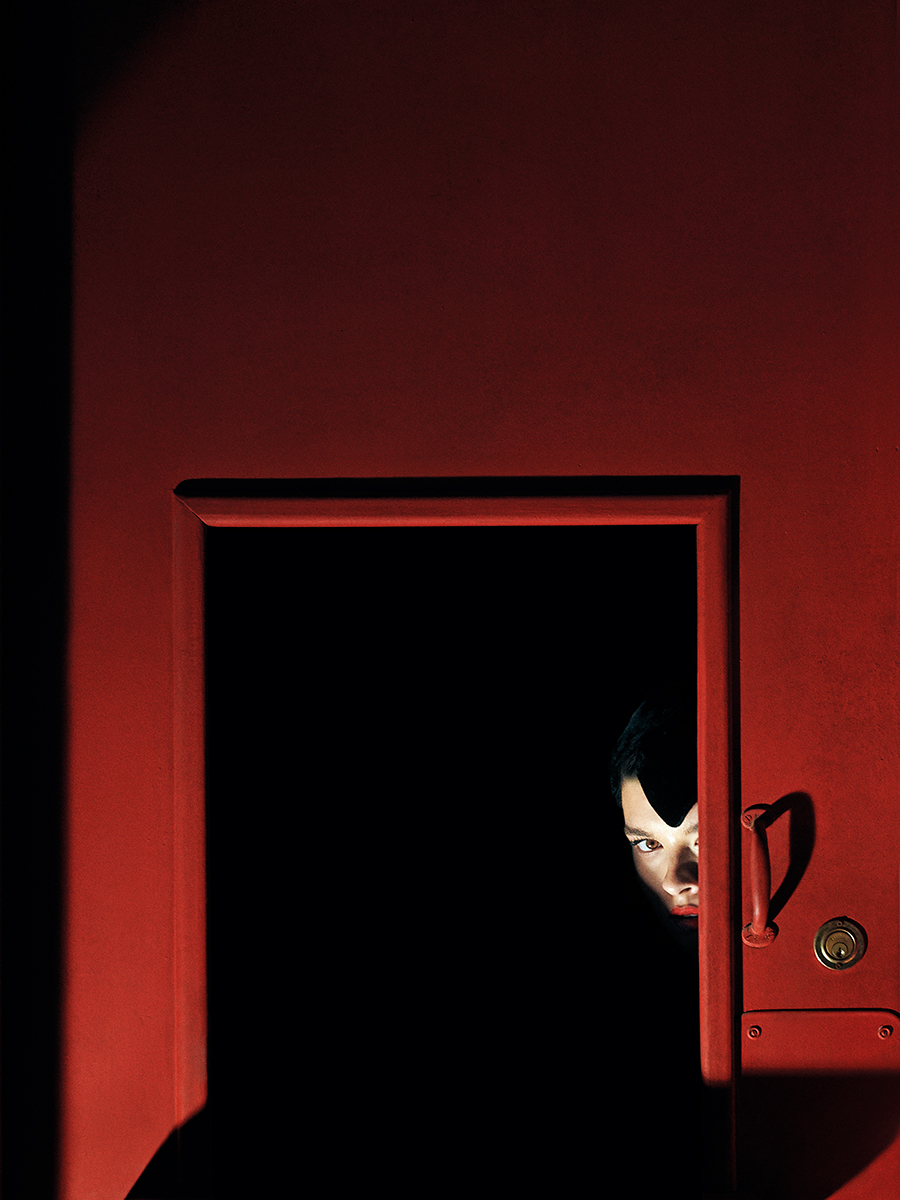 William Ralph Blass (1922-2002) was one of the most visionary, and successful, North American designers. Known as “the King of 7th Avenue” - referencing the famous New York avenue from where the most fascinating creations of Fashion came from - at the height of his career, between the decades 60s and 80s, he was a favourite of celebrities and ladies who lunch. Women trusted him for designing pieces whose impact lasted a long time beyond the first one. Blass, who received numerous awards for his work, it is an indispensable reference in any retrospective on the “Ephemeral industry” in the second half of the 20th century. And, however, for many his name is just something that sticks to a sentence repeated until exhaustion: “When in doubt, wear red.” Why red? The question should be: why not red? It's the first color that humans perceive, after black and white. It is the first color babies see, before any other one. It is the first color that those who suffer from brain injuries, “temporary color blindness”, see again. It's the color of life, in its ecstasy. It's the color of victory, of dreams, of magic. It is the color of freedom, of infinite possibilities. It's the color of the woman who enters a room and, just for her presence, takes everyone’s breath away. It's the color of Christmas, which is fast approaching. It is the color of love.

In 2017, journalist Charlotte Sinclair wrote a text entitled “The Power of Red”, published in the English issue of Vogue, where he praised the red: “We are connected to red. There is no other color so fundamental, so fused with our [more] primitive human temptations. Red makes no prisoners. It is the incarnation of the emphasis, the double underline, the stop sign, the alert, the road block, the alarm, the danger, enthusiasm, sex, passion, encouragement, excitement. And the color of kings and queens, war and empire, theatre and power. It's the Devil and the Jesus’ blood, Hell and the Holy Spirit, the animal impulse and the beating heart, the red dust and the magma core of the planet. It is the color of life and action, the chromatic equivalent of a lipstick kiss (with tongue) and a bleeding nose. Red is adrenaline, fireworks, breaking conventions. It's shame and violence, blush and anger. Red is an abbreviation for large passions: think of red rose sellers outside of the restaurants on a Saturday night, in hearts of love and in red briefs.” If you’re not into red briefs, think about Little Red Riding Hood (it is said that its scarlet tone comes from an old, rural custom of dressing children with pieces of red clothing to avoid losing sight of them). Think of Jessica Rabbit, Betty Boop, or Marilyn Monroe in that sequined V-neck dress with a slit only appropriate for over 18 individuals in the movie Gentlemen Prefer Blondes (1953), which destroyed any doubt about the concept of “immortality” that we could have. If you don't feel like thinking about red underwear, think about Julia Roberts in Pretty Woman (1990), in Scarlett O’Hara in Gone With The Wind (1939), in Audrey Hepburn in Funny Face (1957): three distinct versions of the power that comes from wearing red. Or think of Tilda Swinton in the poster for the brand new Almodóvar movie, The Human Voice (2020), in a crimson red Balenciaga that defies the laws of gravity.

Carla Buzasi, managing director at WGSN (Worth Global Style Network), one of the world’s biggest trend watchers, considers that the prevalence of red is something natural. In an interview with Vogue, the trend forecaster explains the phenomenon in a simple way: “I think that, as any other primary color, red goes in and out of fashion as a basic, but the fact that there are many different versions of it means that we have a version of red in almost every season.” In the cold season of 2014, for example, duo Viktor & Rolf made a collection of Haute Couture in which all dresses had one thing in common: red. This fall / winter, as it should be, the color has been everywhere. Alberta Ferretti, Alexander McQueen, Altuzarra, Balenciaga, Bottega Veneta, Chalayan, Christopher Kane, Givenchy, Marc Jacobs, Miu Miu, Preen by Thornton Bregazzi, Rodarte, Saint Laurent and Valentino (about Valentino we will discuss ahead) were the designers who used it the most in their collections, namely in total looks, which demand high doses of confidence and… audacity. This is because red will never be a neutral color, which disappears without a trace. “Although there are many different associations to red, what I find the most interesting is that it has in fact associations. It is not a passive color at all. It requires an emotional response.” And as such, it is the color we end up thinking about when feelings are the strongest - whether or not there is a happy ending. Therefore, underlines Buzasi, love could hardly be pink. “Red is the most dramatic version of love: the drama, the passion, the heartbreak.”

Heartbreaks aside, red is the color that gives us strength - that elevates our spirit. The creator Jean-Charles Worth (1881-1962) one of the members of the defunct House of Worth, one of the most important French haute couture houses, knew it well. He was one of the pioneers in using the tone “grenadine”, corresponding to Pantone 17-1558, in the mid-1920s. After the austerity imposed by the Second World War, in the 60s the color became popular again with the “Mondrian dress”, by Yves Saint Laurent, and with the “love boots” by Elio Fiorucci. Meanwhile, Valentino Garavani arrived with his assumed devotion to this color, which he describes as “the ultimate cure for sadness.” In 2007, regarding the exhibition “Master of Couture”, the Italian designer explained its relationship with this color: “Red is a color that is not shy. When I was young, I went to see the opera Carmen in Barcelona and the whole scene was red - the flowers, the costumes - and I said to myself: ‘I want to keep this color in my life.’ So, I mixed the tone with the people who make the fabrics - it contains a certain amount of orange - and Valentino Red became an official Pantone color.” In addition, Azzedine Alaïa and Alexander McQueen knew how to manipulate, without fear of falling into excesses, a color that started to be used to accomplish what we call body painting: according to scientist discoveries, Stone Age hunters (over 40,000 years ago ago) used red clay to make body paintings.  In the Paleolithic, people were burned with red powder, to exorcise the evil spirits. And, as is common knowledge, the color was also used for cave paintings, which are spread over the five continents. Although, over time, red has acquired different meanings in different cultures (in China red is still used in weddings, because it is believed to attract luck, in Russia it is possible to associate the tone to the communist revolution). Furthermore it has long played a central role in Christian iconography - because it is “the color jesus’ blood”, cardinals still use it in their costumes. In the Middle Ages, kings wore red to demonstrate their divine connections and "right" to reign.

Someone who has not yet lost the right to reign is Christian Louboutin, or rather, his wonderful red soles. Which originated in a happy fluke. The shoemaker told british Vogue that it was due to the failed prototype of some shoes, entitled Pensées, inspired by Andy Warhol's famous Flowers series. When he got the sample in the mail, Louboutin was disappointed by the impact of the color he had idealized in the final product. “It took me a while to understand that it was the color of the block that made up the black sole.” While he pondered the reasons for that flop, his assistant was painting her nails.” I took her red nail polish and painted the soles. She was not happy, but the color addition was a revelation. The original concept had completely resurfaced.” After all, the designer asked in that interview, “when you turn around to see a woman walk away, what do you see? A contour, a walk and the soles.” No other color has that impact. None.

Some of the best (and most unforgettable) looks by Lady Diana Spencer are based on red. The stunning Jacques Azagury dress she wore for the American Red Cross gala, three months before her death, and the “Illusion dress”, signed by Jan van Velden, that she chose for her first solo trip as a royal member. And let’s not forget the impeccably cut skirt and coat suit (with golden buttons), by Catherine Walker, with which she appeared in July 1989 at an event in West Yorkshire in the United Kingdom. She was the “Princess of the People”, one of the precursors in the use of red as a symbol of power. After her, names like Hillary Clinton, Angela Merkel or Michelle Obama never turned their back on this color in crucial moments of their public lives. The same goes for Alexandria Ocasio-Cortez, the youngest woman to be elected to the American Congress (she had 29 at the time), which made red lipstick her signature look. “Being a woman [is still] something very politicized here in Washington. There is a false idea that you worry about make-up, or if your interests are related to beauty and fashion, this is somehow frivolous. But in fact, I think these are some of the most important decisions that we take - and we take them every morning. So one of the reasons why I started using red lipstick was because when I was running for my first election, outside in our community, nobody knew who I was […] and one of the things I realized was that when you’re always running from one place to another, sometimes the best way to really look is with a bold lip.” The next time you have doubts, you already know. Chose red.