English version | Somewhere over the rainbow

Between odd-numbered communities of dwarves and witches that transform themselves into dragons, the fairytale world is ruled by the representation of our shared imagination. However, even in this world, we feel the shrill absence of LGBTQ+ characters and narratives, nowhere to be found in the fantastic fables. 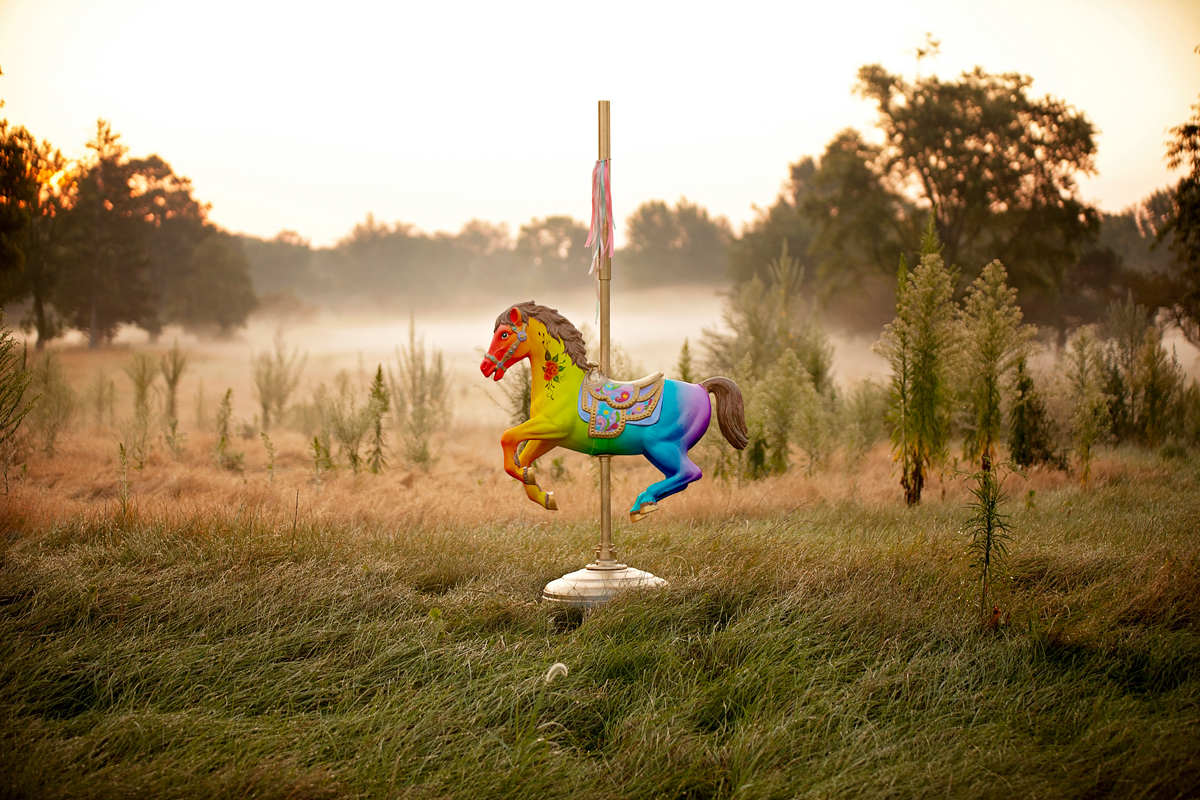 It didn’t take much for me to understand I was different. Ever since I can remember difference hovers over me like an omnipresent cloud, constantly challenging me to forget it, an effort that I frequently made, but a success I rarely felt. These small wins were only achieved through the wonderful haven of fairy tales, responsible in the formative years for their ability to show us the potential our imagination has. And still, in the world of the fantastic, of princesses and witches, princes and dragons, I felt different, excluded. Fables that tell us stories that trespass the limits of logic still make a point to not include any signs of homosexuality. If mermaids can be treated so seriously, why is it that the existence of any characters that aren’t straight and cisgender isn’t a reality? If you have never considered this absence it’s possible that now, for the first time, you might try to explain it as a mere coincidence, an inexplicable accident. But what if it isn’t? What if the exclusion of LGBTQ+ narratives, characters, and representation isn’t just intentional, but in fact completely deliberate? This idea becomes painfully clear when, looking to address this eclipse, crowds with pitchforks and torches in hand show up.

A Fairy Tale for Everyone, a Hungarian book that, as the title reveals, contains tales that are as inclusive as possible, is the proof of this phenomenon. Through its seventeen stories, the book reinvents classic fairy tales, adding characters that are queer or from racial minorities, that are absent in the traditional narratives. From a transgender deer to a lesbian Snow White and a Romani Cinderella, the anthology features well-known Hungarian writers, as well as up-and-coming authors. The book, which had an initial run of 1500 copies, was printed by a relatively small publishing company and became extremely controversial, placing itself in the epicenter of a political campaign that (actively) threatens LGBTQ+ citizens' rights. This small book, meant for children, was publically opposed by some of the most important political figures in Hungary.

The first to react to the publishing of A Fairy Tale for Everyone was the deputy leader of Hungary’s far-right Mi Hazank party, that, during a press conference, tore the book’s page apart, calling it “homosexual propaganda.” This public reaction was swiftly followed by that of the Hungarian Prime Minister, Viktor Orban, that publically opposed the inclusive fairy tales, declaring: “There is a red line that cannot be crossed, and this is how I would sum up my opinion: Leave our children alone.” The prime minister’s disdain allowed for a hate campaign against the anthology, legitimizing the voices that insisted all copies should be burnt, and immediately removed off the shelves from the few bookstores they were in. For Boldizsar Nagy, editor in charge of the book, the generalized hatred “was chilling,” making him feel “like a public enemy as editor of the book.” According to Nagy, the response the book was met with didn’t come out of nowhere, but as part of a “homophobic and transphobic campaign, which has been going on ever since, and unfortunately, with the new anti-LGBTQ+ laws being passed, has had a lasting toxic effect.” Even if he understands that this response is a mere echo of a political strategy that, under pretenses of concern, alienates and criminalizes the existence of queer citizens, the editor confesses he wasn’t expecting it: “I wished that the kids who are searching for answers and looking for affirmation, they would find this book and realize that they are not and will never be alone, that they are valuable, and that fairyland is theirs too.”

The arguments used by Hungary’s political class, that compare queer content with an attempt to sexualize children, aren’t exactly original — they’re in fact the most reoccurring justification for the prevention of LGBTQ+ narratives in fairytales. By correlating the queer spectrum with child abuse dangerous fallacies are committed. The comparison between the both not only discards and trivializes the weight of literal crimes and victims’ experiences, but it also bases itself on arguments without any type of scientific validity. Matters regarding sexuality and gender are still very recent in the public conscience, particularly when intercepted with puerile innocence. The fear regarding children’s LGBTQ+ identity only reveals the latent prejudice within our culture, the biased lens through which we perceive queer individuals. As Boldizsar Nagy highlights, “We feel it is wrong and immoral to bring LGBTQ+ into the nursery for fear of sexualizing children. If anyone thinks that children are too young to learn about LGBTQ+ people, it´s because most adults can only look at LGBTQ+ people through the filter of sexuality. And yet LGBTQ+ identity is only one element of our complex identity.”

There are other concerns, exponentially irrational, that argue that, if a child is exposed to LGBTQ+ content, they will become queer. These “arguments” not only base themselves on homophobic and transphobic beliefs, but they also presume that a person “becomes gay”, instead of being born that way. The impressionability is highly overestimated — if hiding LGBTQ+ content from a person made so people could not become queer, after 23 years of being bombarded with, not only straight characters but also heteronormative narratives, surely my homosexuality would have been revoked. Children don’t “become gay” by watching two men kiss, or a transgender protagonist for that matter, the perception children have of their sexual orientation and gender identity is more premature than usually assumed. According to studies published by John Hopkins Children’s Hospital, between the ages of two and three children start to develop a sense of gender roles and how they might fit in these, a placement that might, or not, correspond to their sex attributed at birth. There is however no scientific proof that somehow connects queer content to the LGBTQ+ identity of a child, although there is plenty of studies that detail the importance fairy tales have in the emotional and psychological development of a child. Responsible for the development of self-esteem and empathy, representativity in content designed for children is fundamental to the posture children will ha e when facing the world. In the words of Bodizsar Nagy, “If there is any new impact on today’s children as a result of inclusive fairy tales, it will be that they treat LGBTQ+ people as normal.”

If the scientific studies prove that representativity in fairytales would not only raise kids’ self-esteem but also actively contribute to a more empathic society, why are they so rare? According to Nary, the answer is a four-letter word: fear. “The kids’ market is funded by parents, it takes a lot of courage for a film studio or book publisher to experiment with an LGBTQ+ protagonist,” reveals the editor, experienced in matters of courage, having become a public enemy because of his. Even if the fear of consequences controls the way children’s content is produced, we’re slowly starting to see harbingers of change. Disney themselves, the most reliable source of fairy tales in the West, has started to reveal an impending metamorphosis. While in the past their movies would center around a heteronormative narrative, where the love between a man and a woman would consume the entirety of the plot — as well as their “happily ever after”— this is not the case for the movies Disney has been putting out as of lately. Movies like Brave (2012) and Moana (2016) approach storytelling in a completely different manner, replacing romantic love for expressions of independence as the catalyst of the narrative. But Boldizsar Nagy warns us to manage our expectations. Seeing an LGBGTQ+ protagonist in a movie with Disney’s dimension is highly unlikely, he advises us to “make do with lesser-known queer children’s films, series, and books.”

Anything that involves the heightened sensibility that children have requires special attention, especially the fairytales we tell them. It’s through these fables that we learn how to dream, to love, to be. It’s imperative we are demanding when it comes to the stories future generations are going to grow up with, we have the responsibility to give the children of the future dreams where they can see themselves, fantasies they can participate in, whether they’re queer or not. The path will have to be trilled, new fairy tales will have to be written. As Boldizsar Nagy reminds us, “let us create, let us make mistakes, let us improve, but let us do one thing: let us not let our children down.” The responsibility is heavier on our shoulders than it was for the storytellers of past generations, they lived in a different time, without the access to the information we have nowadays. Let us work to fix the mend past mishaps, let us invent new princesses, and new dragons, so that children of the future grow up in a world where the haven of fairy tales isn’t just another perpetrator of exclusion.