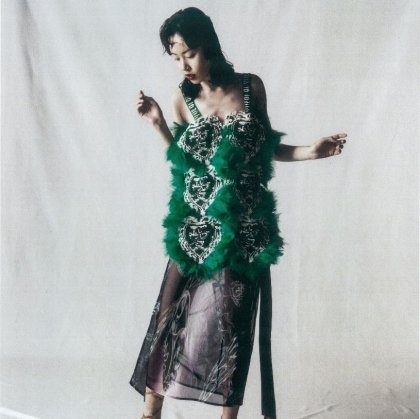 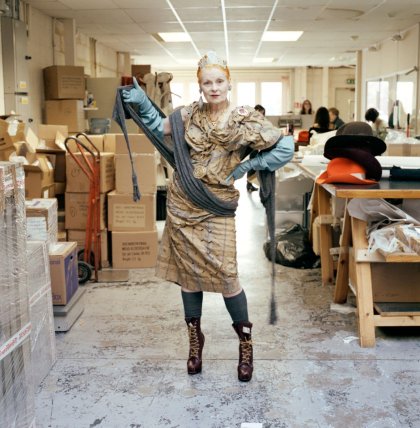 People call them eccentrics. We prefer the word unconventional. 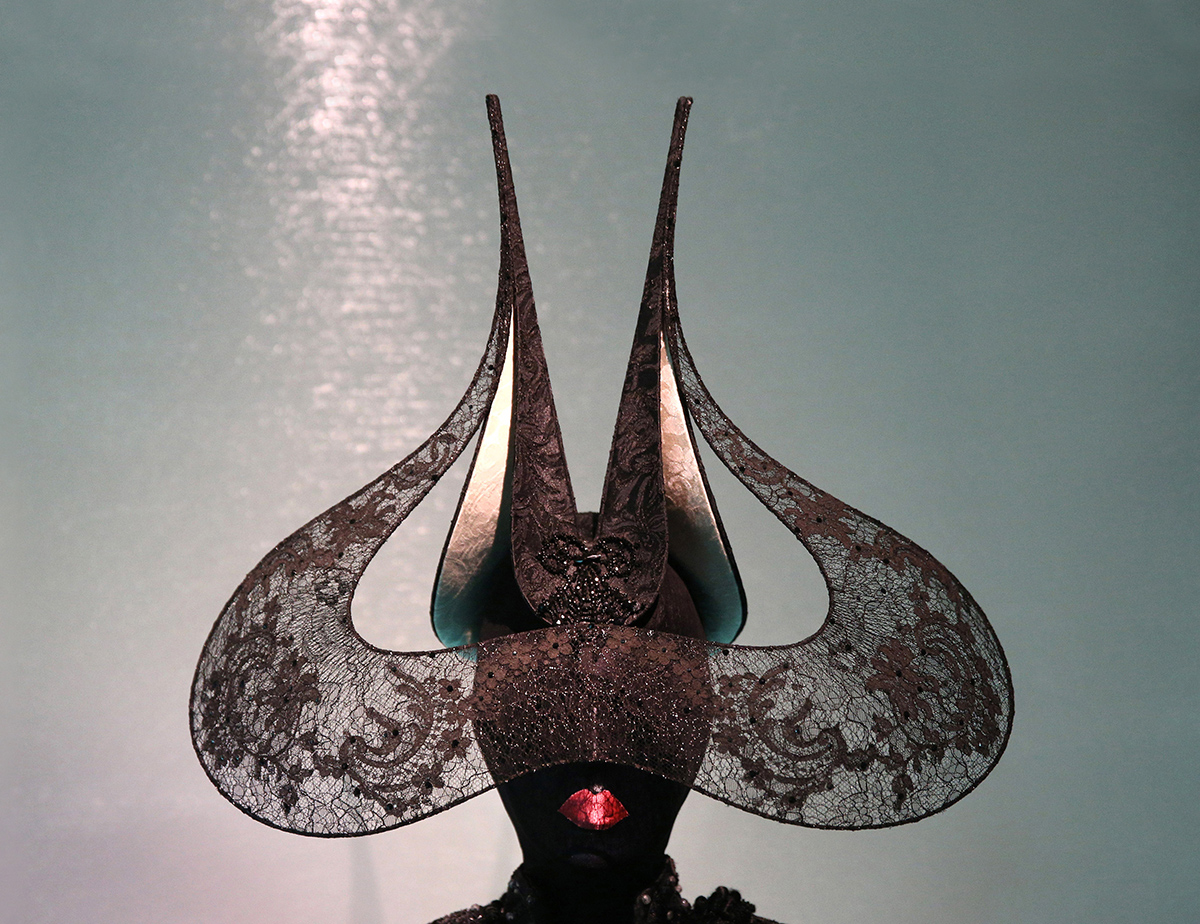 “I always had a very strong idea of ​​what I wanted to look like. When I was about eight years old, [I realized that] I didn't look good in pants - I still don't wear pants - so I told all the kids in the neighborhood that from then on we don't wear pants, only dresses. Even today I dress like a child, in a way. Sometimes I see a two-year-old kid on the street, wearing a giant tutu, a funny sweater and polka dot socks, and I think, 'That's my look.'” In 2013, iconic American journalist Lynn Yaeger was interviewed by the Business of Fashion where she discussed her long career and where she also addressed the genesis of her… peculiar style. Yaeger, known both for her talent for playing with words and discovering talents and for her appearance - an indescribable haircut, somewhere between the bob and the eggshell, in a shade of red that no one can replicate; the lips irremediably painted the darkest carmine; the white skin, immaculate, without traces of make-up, except for two strokes of pink blush that she won’t ever get rid of; and the outfit, which can be anything, the base ensemble is a black evening dress, with a thousand layers of tulle, coordinated with silk leggings, ballerinas, a fur coat, a scarf and a hat from the old Union Soviet - has never been shy about assuming her (immense) love for fashion. “Having an eccentric style can be a men repeller, because it's not about being sexy. It is too sincere, and I think that authenticity can be a little scary for some people,” she had told W. magazine a year earlier, in 2020, when the pandemic sent half the world home and suggested that we put aside our best outfits and succumb to the combo “t-shirt and joggers”, Yaeger wrote an essay on the website of the American issue of Vogue, where she appealed to all readers who still liked Fashion - especially at that time. “If You Love Fashion, You Don’t Stop Loving It In The Face of Adversity.” And his testimony, sincere, as usual, may well have served as an incentive for many people to insist on using, even if only occasionally, the pieces that they thought they would discard until the virus disappears. Because this is also the power of Fashion: to heal. “I ironed my skirt on 9/11. If you leaned far enough from my bedroom window, you could see one of the towers burning, but I still ironed my skirt - a Dries Van Noten dirndl [traditional costume from countries like Austria], if I remember correctly - because this is what I do, and what I have done, always.”

Yaeger is not alone. She is joined by a list of names, all of them industry experts, for whom the rules of style are as relevant as knowing the eating habits of an ant. Cleopatra (69 BC - 30 BC), Marie Antoinette (1755-1893), Isabella Blow (1958- 2007), Anna Piaggi (1931-2012), Zsa Zsa Gabor (1917-2016), Iris Apfel, Daphne Guinness, Catherine Baba , Lady Gaga, Rihanna ... Are we forgetting someone? We are, of course. A lot of people. It would take two issues of Vogue to include all women, and men, who couldn’t care less about trends and what can hurt the taste of others. Aware of their choices, which may seem blatant to ordinary mortals, they are not content to go unnoticed in the crowd. Especially because - or mainly because of that - they don’t dress to please others, but themselves. Let us remember the statements of António Variações (1944-1984) to the newspaper Correio da Manhã, when he was already a renowned musician: “I was always António Variações [...] and never just António the hairdresser ... And I always felt part of the Show. I always tried to make a show out of a haircut. And I will be the show even to just sweep the streets of the city.” Whatever he was doing, Variations did it at its best. And he did it with piles of glamor, which is something that is rarely associated with the male sex, even less with the singers. Because? Va savoir, as the French say. Right, right, the thing is the author of Estou Além exploded at a time when Portugal was beginning to open up to the world (end of the 70s, beginning of the 80s) and its eccentric, incomparable, unique figure emerged like a breath fresh air in a country used to seeing everything in black and white, until then: ultra-tight leather pants, wide belts, earrings with stones, jackets with shiny bands, XXL rings, the famous scissors “glued” to his eyes ... Variations was, in fact, beyond. As well as Isabella Blow, the woman who "discovered" (literally) Alexander McQueen and who once assumed that her passion for fashion "was close to insanity." Her impressions about style were able to fill an encyclopedia, so we left two to pique the curiosity of those who still don't know this English woman that gave a new meaning to the word diva: “If you don't wear lipstick, I can't talk to you”, or “My style icon is anyone who makes a fucking effort.” Too much? Not for Mrs. Blow, who was walking around London in couture dresses and lobster Philip Treacy hats - years later, Lady Gaga would wear a replica of the piece - like someone who goes out for a hygienic walk. Her notion of overdressed was non-existent, and that is what made her a legend. “I am a traveling billboard”, she even admitted, without shame. "The pleasure is mine." And, add up, ours.

But what is it about being overdressed? And why does it have to be a bad thing? After all, Rachel Zoe once shot, “What's the worst scenario, being the best-dressed person in the room?” We really don't know how to answer. Society has created an idea of ​​what is, or should be, suitable for certain occasions, and anything that escapes these patterns fits into this imaginary notion of overdressed. That, it should be stressed, only bothers those who are underdressed. Because whoever is having fun - read, delighting him or herself - with their wardrobe choices has more to think about. Believe us when we tell you that, who has the nerve to leave the house with tigress pants, a sequined blouse, and red stilettos (this example can be replaced by anything else that eventually causes you “horror”, just imagine Leandra Medine, the ex-Man Repeller, strolling the streets of New York with her improbable looks and you will understand what we are talking about) couldn’t care less about what others think.

What unites all these absolutely fabulous people is the fact that, at some point in their lives, they told conventions, prohibitions and everything that (someone) said to be right or wrong to fuck off. They preferred to start dressing for themselves, not caring about the seasons and the approvals of others, and turned their backs on everything that seemed to be prohibited. A lycra dress in an insurance company cocktail? "Frankly, my dear, I don’t give a damn." An example? To wear “party” clothes while the sun is still shining. The English creator Molly Goddard mentioned this in the last issue of Vogue, for having realized, at the expense of quarantine, that any moment is right for us to put on our favorite pieces. Such reasoning, at one point, made Anna Dello Russo, adored by street style photographers for her risky outfits - but never boring: “We usually wear our best clothes when we go out at night, and we feel fantastic. But why wait? Why shouldn't we wear our best clothes in the morning? I love evening clothes during the day, because the sun accentuates its beauty and silhouette. At night, you can't see so well.” We believe that it is be more or less what goes through the mind of the wonderful Iris Apfel who, about to turn 100 years old, continues to get ready, every morning, with the care and attention of those who do it for the first time. Its silhouette is unmistakable: gigantic round black glasses, necklaces of an inexplicable size - the size, sure, to exist, would be “Iris Apfel” - bracelets that wind up arms, a thousand colors, three thousand and one patterns, gray hair, red lips, and a smile that defies time. The key word, for her, is fantasy. A fantasy that knows no limits.

This is the word that we must take into account every time we fall into the temptation to point the finger at someone who (looks) loud, fantasy. Because this is what Fashion has been nurturing, since its beginnings, and it is this, fantasy, that sustains its incomparable quality of universal good - a universal good which serves, above all, so that we can express, through an endless number of materials, cuts, textures and tones, our personality. Whatever it is. And that means that, for some, it is garbage, for others it is luxury. Yves Saint Laurent's Libération collection (which came to be known as The Scandal Collection), presented in 1971, was both applauded and criticized. During the time he was in charge of Dior, between 1996 and 2011, John Galliano's creations for the maison achieved the feat of being simultaneously considered “works of art” and an “attack” on Monsieur Dior's legacy. The proposals of Mugler and Gaultier, Paco Rabanne and Pierre Cardin, Vivienne Westwood and Martin Margiela, all fashion giants, never reached consensus. Either because they were sexually stimulating (adapt the phrase for “the problem is in the eye of the beholder”), lustful and provocative, or because they broke taboos in the use of new forms and fabrics, or because, being different, they asked questions that the public was not prepared to approach. Can you imagine any of these designers hiding behind the curtain and thinking "it is best not to show this because it is not consensual?" Right, thought so. This is what happens with the incredible, extraordinary and, we repeat, absolutely fabulous, “rare birds” that roam the four corners of this planet, and that, with their inexhaustible sense of style, continue to give a new breath to Fashion. They don’t give a damn about what other people think and are only governed by one rule: to break all the rules.