English Version | Lado B: Music to my senses

Ludwig Beethoven exposed, in a way as genius as the sounds he composed, that music was the “mediator between the spiritual and the sensual life”. Ironically, life would end up taking away his hearing, forcing him into a state of late deafness. There are, however, some who have never even had the chance to listen to music: someone who was born deaf can’t listen to music. But they feel it. And they assure us: to be able to feel it is music to their senses. 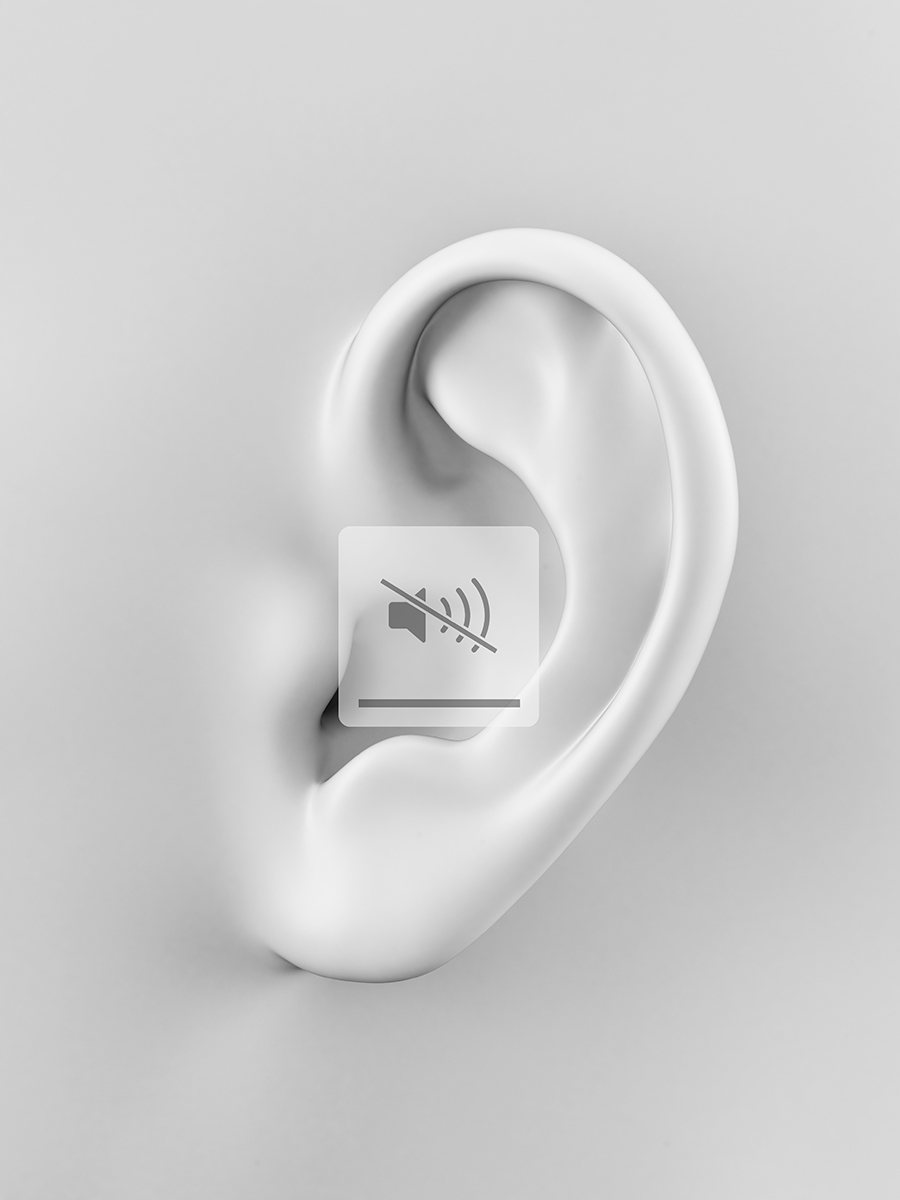 I’m writing this text to the sound of a classical music collection – the one I always listen to when I write. It’s like an antidote. It’s part of my writing ritual. Would I be able to write without it? Odds are I could. Would words flow the same way? I have no idea and have no wish in indulging in that thought. For the mere mortal, to listen to music is a natural thing: you listen to it just because. You listen to music to laugh or cry, to dance, to pass the time or watch time go by. You listen to music in the car because there’s a traffic jam and in the shower because we like to sing in there. Nietzsche expressed that “without music life would be an error.” The truth is that there are people who live – or have to live – without music. At least without the most formal way of listening to it, which is hearing it. “There are various degrees of deafness: light, moderate, severe and profound. The profound level is equivalent to those people who hear nothing, as some are born without hearing capacities. Due to congenital malformations or because they suffered some genetic destruction in which the formation of hearing organs didn’t even take place. Severe deafness, the most complicated one, is neurosensorial deafness, which hits the hearing organs of the internal ear canal.” This explanation comes from Jorge Spratley, otorhinolaryngologist at the Centro Hospitalar e Universitário of São João, in Porto, professor at Faculdade de Medicina, at the Medical School of the University of Porto and President of the Sociedade Portuguesa de Otorrinolaringologia e Cirurgia Cabeça e Pescoço (also known as SPORL-CCP). Let’s say that deafness can be, or not, not absolute: “The most common form of deafness is the one related to age or trauma” and not the one that appears from birth, since “today we have technology that allows us to supplement the shortage of some babies that are born with a profound hearing deficiency, with the inexistence of hearing capacities.” The doctor underlines: “Tracking is incredibly important. Because children, when they are born deaf, usually they have a window of opportunity that goes more or less until they turn four”. And explains that, indeed, children who are born deaf can’t hear a sound – at all. But they can feel rhythmic compasses. “It’s not exactly sound, what they hear is not a melody, but rather rhythms.”

Around the time he was 26 years old, Ludwig Beethoven (1770-1827), that at the age of 20 was already considered a brilliant pianist, started to hear buzzing in his ears. In 1800, when he was 30, the young composer wrote to a childhood friend, who worked as a doctor in Bonn, in Western Germany, manifesting his concerns: “In the last three years my hearing has weakened. I can transmit the idea of a peculiar form of deafness – during spectacles, I have to come really close to the orchestra to be able to hear the interpreters, and this happens at a distance where I can’t hear the high notes of instruments or singers’ voices. Sometimes I also can’t hear nearly anything of what people who speak softly are saying. The sound I hear is true, but not the words. However, if someone screams, I can’t stand it.” Beethoven tried to maintain his problem in secret. He feared that his career would be ruined if someone were to find out. “For two years I avoided almost every social gathering because it is impossible for me to tell people ‘I am deaf’”, he confessed. “If I was in any other field it would be easier, but in my profession, it is a frightening state.” This one time, Beethoven went out for a walk across the field with his colleague and composer, Ferdinand Ries. As they were walking, they saw a pastor playing the flute. Beethoven would have seen on the face of Ries that a beautiful melody was being played, although he couldn’t hear it. It is said that Beethoven was never the same after that incident. That is regarded as the first time that Beethoven faced his deafness. At 44 years old, the composer was practically deaf and incapable of hearing either voices or sounds. “He [Beethoven] progressively stopped hearing. However, he was already a post-lingual person. And he was a musician… He had all the ideas already on his mind. He could, through cerebral education and of music sheets, understand what he was doing. And continued to compose after becoming deaf. But that only happened because he already had that skill”, Jorge Spratley enlightens. The scenario is evidently not the same for those who are born deaf, as the doctor had already explained. Margarida, 66, is deaf-mute since she was born. She tells Vogue that her deafness “was caused by medication administrated in the first months as a baby. Since then, I have suffered from a permanent hearing deficiency, calculated at 72%”. Pedro, 30, and current President of the Associação Portuguesa de Surdos, shares that he was born with this condition: “Congenital deafness has always been, for me, a specific definition in medicine I didn’t identify myself with since, sometimes, I have difficulty responding promptly with these words. I identify as a Deaf Person.” Pedro suffers from profound deafness. It is considered profound when the only audible sounds, for a certain person, are above 90 decibels (dB). As a comparison to what would be considered normal hearing, this would be between 0 and 20 dB, and Pedro’s one is around 110 dB: “Sounds like a cutting machine, trucks, planes and other very loud ones are not audible to me, although I can hear certain ones that are extremely loud, for instance when an ambulance passes near me.”

For both Margarida and Pedro, the experience of “listening” to music is something else. The young President of the Associação Portuguesa de Surdos explains that for more than 20 years he wore hearing prosthetics, which allowed him to hear sounds closer to the levels of hearing considered normal. “This way, I could experience several pieces of music when it came to sounds and rhythms, except I couldn’t understand the lyrics. Now, it’s been many years that I stopped using prosthetics since I no longer feel the need to hear. To listen to music is possible for me now in two different ways: the use of high-quality headphones and a modification of the VLC program that increases sound by 300%. The sound becomes audible and good enough for me, though it is too loud and weird for other listeners. The second way would be, as it is so for many other deaf people, through vibrations on surfaces or, if strong enough, in the air itself, as it happens inside clubs and bars. We can’t hear the lyrics, but we feel the rhythm, and that is enough.” Margarida confirms: “There are many deaf people that feel the music through vibrations. And it makes us want to dance. It is great to feel those vibrations. The feeling must be similar to what other people hear, I believe… It makes you really want to stand up and dance.” The otorhinolaryngologist doctor recalls that, before, the following scenario was very commonly seen (and recommended): “The mother played the piano and the child [deaf] would like to go ‘listen’ to their mother. Usually, the mother would put her hand on the piano, and it would vibrate. Thus, while the mother was conveying an emotion, playing, singing or dancing, the child knew and felt that there was an environment of happiness there and gladly participated. They would laugh, be happy. And that is positive.” It’s interesting to realize how habit really does make the monk. Pedro, who is perfectly aware of the advanced technology in the field of deafness, tells us that there are deaf people who want to hear and search for ways to do so, as well as there are others that are happy without hearing and don’t feel the need to: “I am one of those. It should always be up to the person to opt for hearing rehabilitation or not. It should never be forced by third party’s intentions, because it is equivalent to deciding for another their preferential skin tone, correct body shape, gender, amongst others. Someone’s identity is defined by what they see and feels about themselves, not by what others want them to be.” He adds that, in the absence of his hearing, his other senses are extremely stimulated: “What to me is a normal peripheric vision, for someone who is said to be a ‘normal’ listener is very difficult to reach, since ‘normal’, in that case, is supposedly more limited. Here we play around with the word ‘normal’ deliberately, since we still live in a homogeneous society in such a way, that, in order to give purpose to one’s life, we use the word ‘normal’. The capacities I am in the hold of, relatively to eyesight, result from a better reception of visual information, I am naturally more apt to perceive details that the common eye won’t see, such as someone’s body language. I also react more rapidly to movement and subtle details that an ordinary person would take longer to perceive or that they wouldn’t perceive at all. There are studies that indicate that the brain, being that it is a very efficient organ, reuses cells, that are numb when it comes to hearing, applying them to vision, allowing for a ‘visual colonization’. Curiously, studies also indicate that when hearing appears, the sharpest vision is reduced to more common patterns. It’s as I like to say, where society sees a shortcoming, nature finds a way to transform it into efficiency.” Jorge Spratley corroborates this theory: “Because the brain is a plastic, adaptable organ… And if brain cells that are destined to hear are not being stimulated, if they are not ‘watered’, they stop their hearing functions and begin to take up new roles. They survive from being in contact with other cells, so if they have no hearing preset, they will begin to develop other functions such as visual, sensorial…” And this is a significant claim that fits perfectly in the best of both worlds: on one side, for those children born deaf, whose parents are still “in time” of reverting their condition – as the specialist adverted at the beginning of this text by mentioning the advances of technology; on the other hand, for people like Pedro who, living well in their deafness, take that as an opportunity to develop other senses being perfectly happy and content this way. The world is not black and white in it all forms of existence can fit. Such as the 30-year-old deaf man referred, the term “normal” is just another way of conferring meaning to our existence. But it doesn’t define an existence. Not even the way of “listening” to music.