English Version | Art is the mirror of life

It's the object that fascinates any painter or that which brings to light something hidden in a photograph. It's the object that multiplies perspectives and that represents expertise. The mirror and its reflections have been dazzling and inspiring artists to create. Eternal or not, those works of art have infinite possibilities of being, of seeing and of reflecting the world. By Maria Nunes 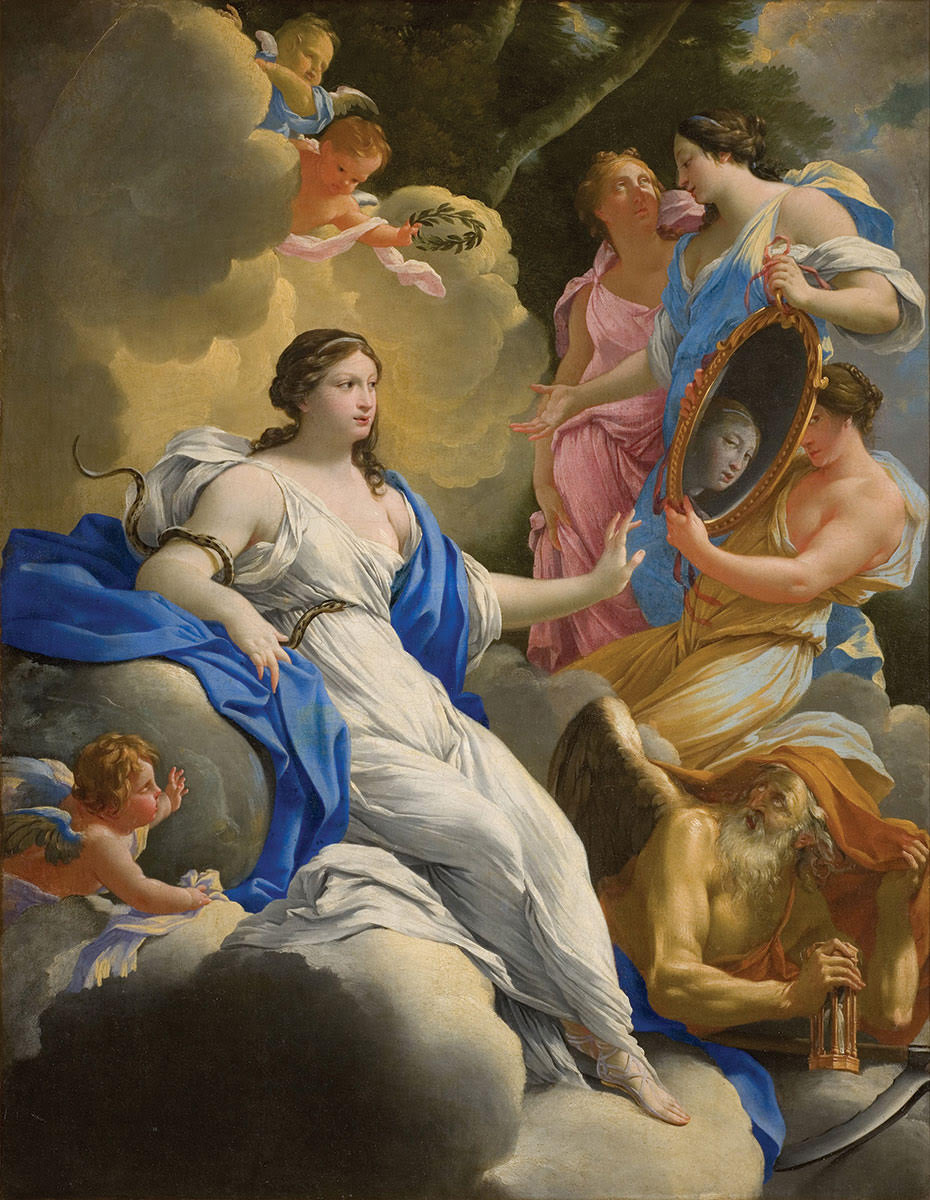 Chicago Tribune, issue of the eighth of September of 1912. On page 48 one could read an article entitled "Those deadly little mirrors", which explained how the little pocket mirrors had become an obsession for the ladies at the time, but also a danger. The illustration of the news justified the use of the adjective "deadly" and it showed pictures of ladies crossing the street while looking at themselves in those mirrors, completely unaware of the environment surrounding them and even using the mirrors of the parked cars without any prejudice or preoccupation. Mirrors had made vanity reach all of society, but this effect was not something new, as it can be understood by the observation of the painting by Auguste Toulmouche, Vanity, of 1890. However, the ostentation and wealth were also synonyms of these objects, which in the XVII century were still very expensive and considered a true luxury. It was precisely with this thought in mind that the French king Louis XIV ordered the construction of the, now globally known, Palace of Versailles. The best form of showing his power and wealth that he wanted to flaunt and have everyone lust over. The Hall of Mirrors, which is part of this huge work of the baroque period, it's the room that best reflects the domain and vanity, intrinsic characteristics of that monarch. It was a request done in 1678 to the architect Jules Hardouin-Mansart, who coated the 17 arches with mirrors that reflected the windows which led to the garden, projecting light and assigning a grandiosity to the room, using a total of 357 mirrors. History tells us that, even after its perfection in the XVI century by the hands of Italian craftsmen, mirrors were not something that could be found in any place but rather something that quickly turned into a source of inspiration to the different art forms. Mirror art with its eminent reflective characteristic can take various forms. Mirrors carry numerous and powerful symbolism, in life as in art and are an instrument that offers infinite possibilities of use. Certain artists explore this concept by its narcissistic side and seek to confront themselves and its spectators with an analysis of their own physical existence and its reflections. Nonetheless, there are also many who use the mirror as an instrument to delve into spacial distortions that originate different variations on the surface of an object. But the narrative is common to any of the explorations of this art since all of them move around the perception of "self" and of the different understandings of the world that surrounds us. When two mirrors are placed in front of each other they create an illusion of infinity. And the relationship of art with these fascinating objects show to also be eternal. In the words of the English playwright George Bernard Shaw, "You use a glass mirror to see your face; you use works of art to see your soul." 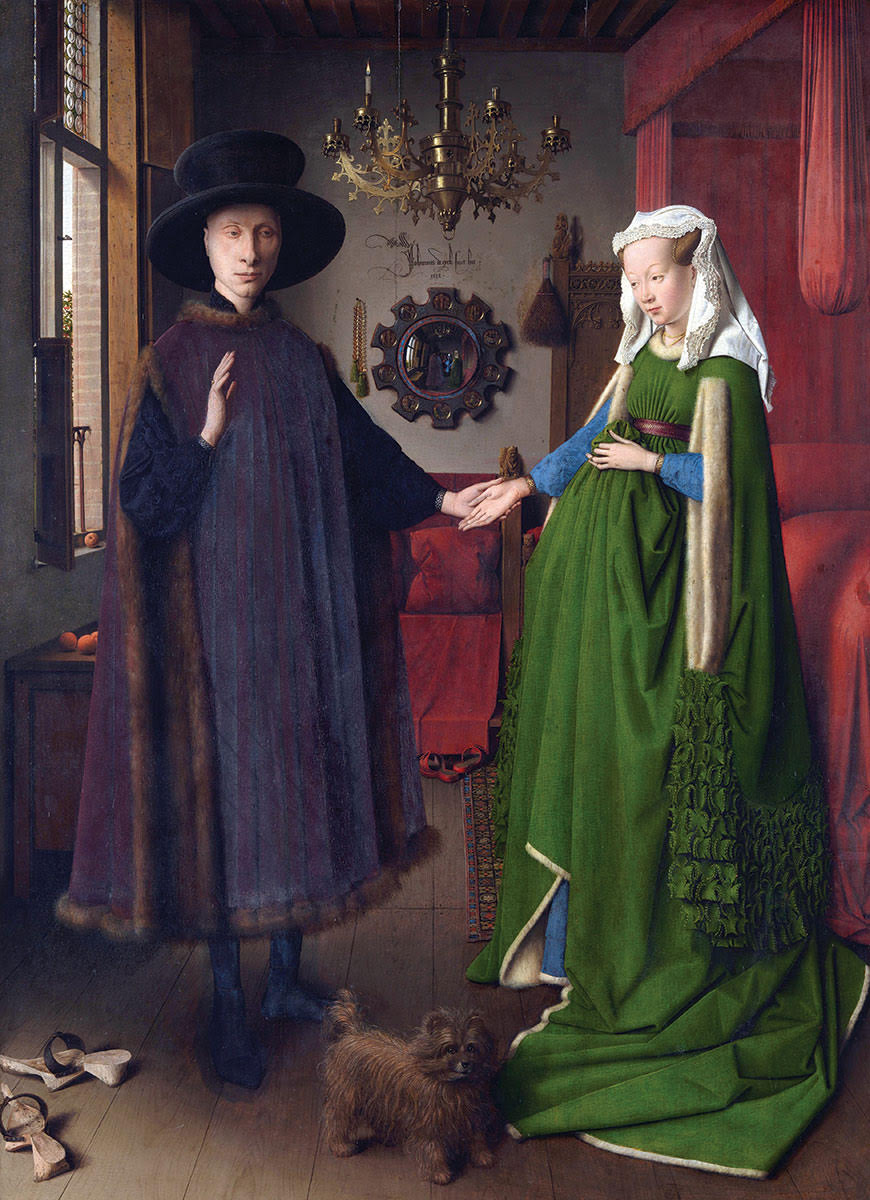 The symbolism of mirrors in art started by having two meanings – different but recurrent. If, on one hand, they were associated with the truth, since the mirror reflects that which we believe to be the reality, on the other hand, they represented superb and lust. Like the myth of Narcissus, who fell madly in love with his reflection and ended up being the object of countless interpretations, like the scene painted by Caravaggio in 1599. This allegory associated with mirrors, that is the idea that mirrors work as a window to the truth, could be something positive (or not) to who was seeing its reflection and chose to delve its thought into what it was seeing. It would be as if the mirror revealed something that was hidden in the soul. Similarly, there are also several representations of the seven deadly sins holding mirrors. In one of the most famous, Lust, which then represented women's vanity and its power to seduce, is painted by Ticiano Vecellio, in 1514, in the painting Women with a Mirror. During the renaissance and baroque periods, the feminine figure is characterized mainly naked, looking at herself in the mirror, surrounded by elements such as a hairbrush – this image became recurrent and was interpreted as a symbol of futility and vanity, as in the painting by Diego Velázquez, Rokeby Venus, of 1647. Another meaning associated with the mirror, also very present in paintings of the renaissance era, was connected with the cardinal virtues, in this case, the figure of Prudence. She was portrayed alongside the figures of Time and Truth, this last one holding a mirror where it could be seen her reflection, which meant wisdom because the mirror should reveal her true self and was an instrument to reach verity, as represented by Simon Vouet in 1645 in the painting Allegory of Prudence. The famous work of the Flemish painter Jan Van Eyck, Arnolfini Portrait, of 1434, which portrays the wedding of two important personalities of the XV century society, has the particularity of revealing, on the mirror that is in the back of the room, the reflection of the ceremony as well as the painter and a witness, something that was revolutionary for the time. In this period it started to appear new ways to use the mirror, to portray it in art and new interpretations regarding its symbolism. Las Meninas by Diego Velázquez, dated 1656, is also a very important painting in mirror art, due to the different perspectives it offers: the innovation, at the time, was in the fact that the painter presented in the left, was looking towards the spectator, giving the illusion that he was painting its portrait. These different perspectives sought by artists of the time, transmitted duplicity associated with the author’s work, who seemed to be as inside as it was outside the painting. On the other hand, the mirror was also used as a mean to express the trustworthy representation of the act and of the figures present in that moment, it was like a confirmation of the expertise and the excellent work of the painter. As Leonardo da Vinci stated, "the mind of the painter must resemble a mirror". Many renown artists of the XX century have leaned over this theme. René Magritte, master of metaphors, painted the sky in the place of the iris's eye in The False Mirror (1928), whose title itself provokes debate and discussion, but also in his surrealist painting Not to be Reproduced (1937), where he does a "portrait" of Edward James (commissioned by himself), although not painting his face. Picasso (Girl before a Mirror, 1932) and Salvador Dalí (Dalí Seen from the Back Painting Gala from the Back Eternalized by Six Virtual Corneas Provisionally Reflected by Six Real Mirrors, 1972-73) have also made use of the several perspectives that the mirror brought to their art, as well as Roy Lichtenstein in all his series Mirrors (1972) or the work Standing Man (1962) by the Italian artist Michelangelo Pistoletto. 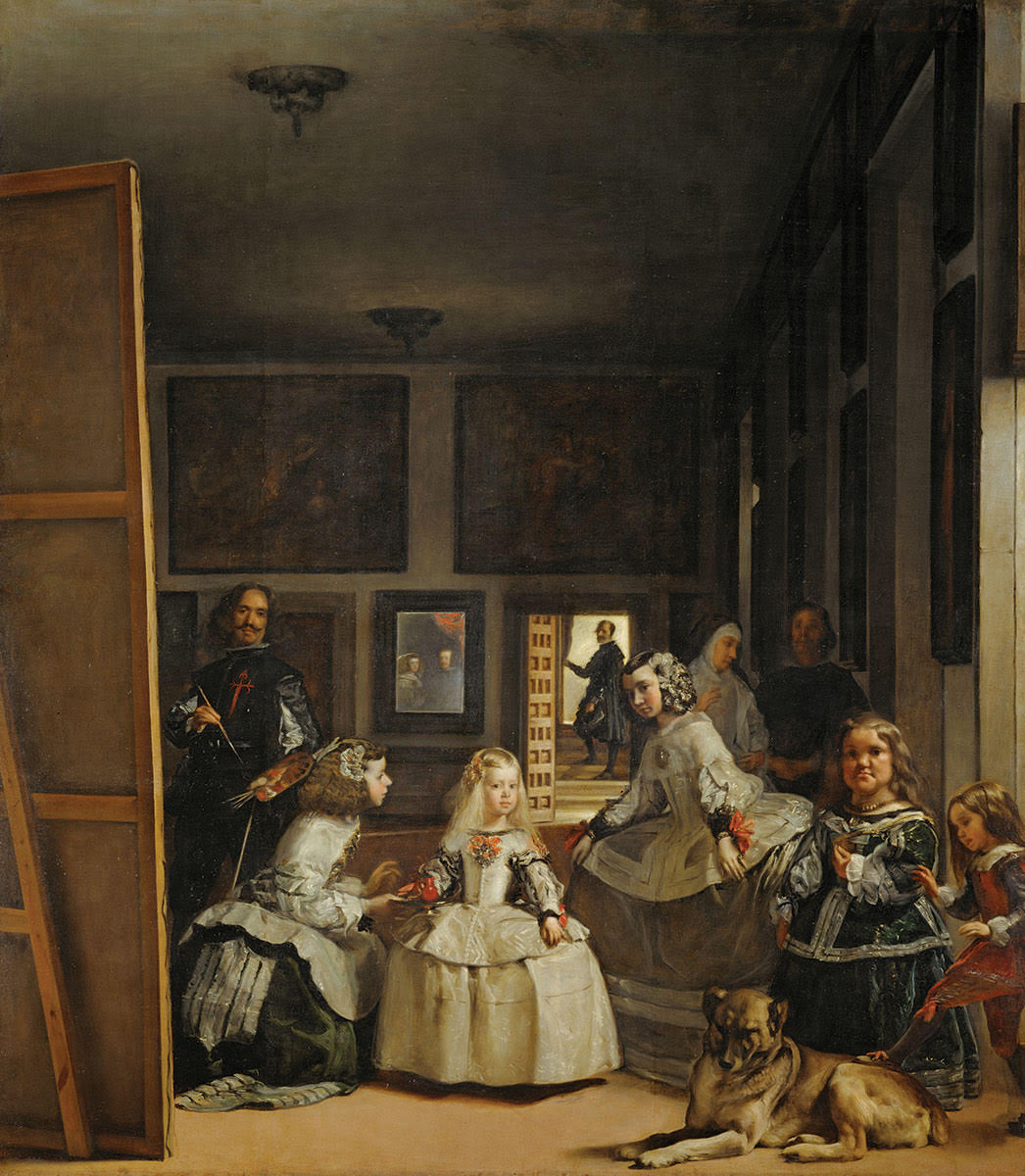 In modern art, female artists have kept delving into the idea of vanity and the female reflection in the mirror, but to break up that stereotype created by classic art. The mirror was used to reflect about identity and was a game between what is the reality and was is just appearance, like in the photograph of Ilse Bing (Self-portrait, 1931), in which the camera lens is pointing towards the spectator, making it one of the elements of the work, or be interpreted at the same time as a self-portrait of the artist. In contemporaneity, the mirror loses this more allegorical meaning to a more palpable symbol, it is a physical object with which the art of photography interacts and delves over matters of identity, seeing and introspection, as in, reflecting about ourselves. In a way, many of the more contemporary installations and works of art that use mirrors as the principal medium, would not possible to accomplish without the spectator/user, at least not in the same way or with the same impact. The north-American artist Robert Smithson, pioneer and famous for its land art, used mirrors a lot as a material for his installations, he used to say: "I'm using a mirror because the mirror in a sense is both the physical mirror and the reflection: the mirror as a concept and abstraction: then the mirror as a fact within the mirror of the concept." Dan Graham, a north-American artist of the period of contemporary art and minimalism, a precursor in interactive art and video in the 1970s, sought similar ideas. With the Present Continuous Past(s) installation, of 1974, he had the goal to confront the spectator with himself/herself, with his/hers perception of time and space and what was an approximation of what others saw of us. He tried to explore other ways to see ourselves and think about how we are subjects that interact in time and space. What we think is not defined and restricted, but an ongoing change without a definite ending. His work is hybrid and does not seek a factual definition, since Graham uses glass and mirrors as well as infinite transparencies and reflections which they provide so that the spectator has an active role in his work.

A quick Google search would lead to recognizing the works of art mentioned above, as well as the big (in size too) works of Anish Kapoor and the dazzling installations of the Japanese artist Yayoi Kusama. Regarding Kapoor, there is, for example, Sky Mirror (with several versions in the UK, in New York, Saint Petersburg and others) and Cloud Gate, the famous giant "bean" that takes over the AT&T Plaza in Chicago, in the USA. The works of Yayoi Kusama, Infinity Mirror Room and Chandelier of Grief, illustrate the possibilities of reflections and fascinating images that can be created when combining lights and reflective objects with totally mirrored spaces. Others, like Arnaud Lapierre or Doug Aitken, have been using mirrors to create a personal aesthetic with dozens of followers all over the world. For centuries, mirrors have always been a powerful instrument for art, being present in painting, photography, video and in all that are the most alternative installations of the imagination of the most restless minds. Its relation with art promises to last and to be seen reflected in all directions. Regardless of its countless variations, all the uses of the mirror as an object in art, whether it being literal or metaphorical, have a common goal: the confrontation with its reflection and the deconstruction of the concept of identity. 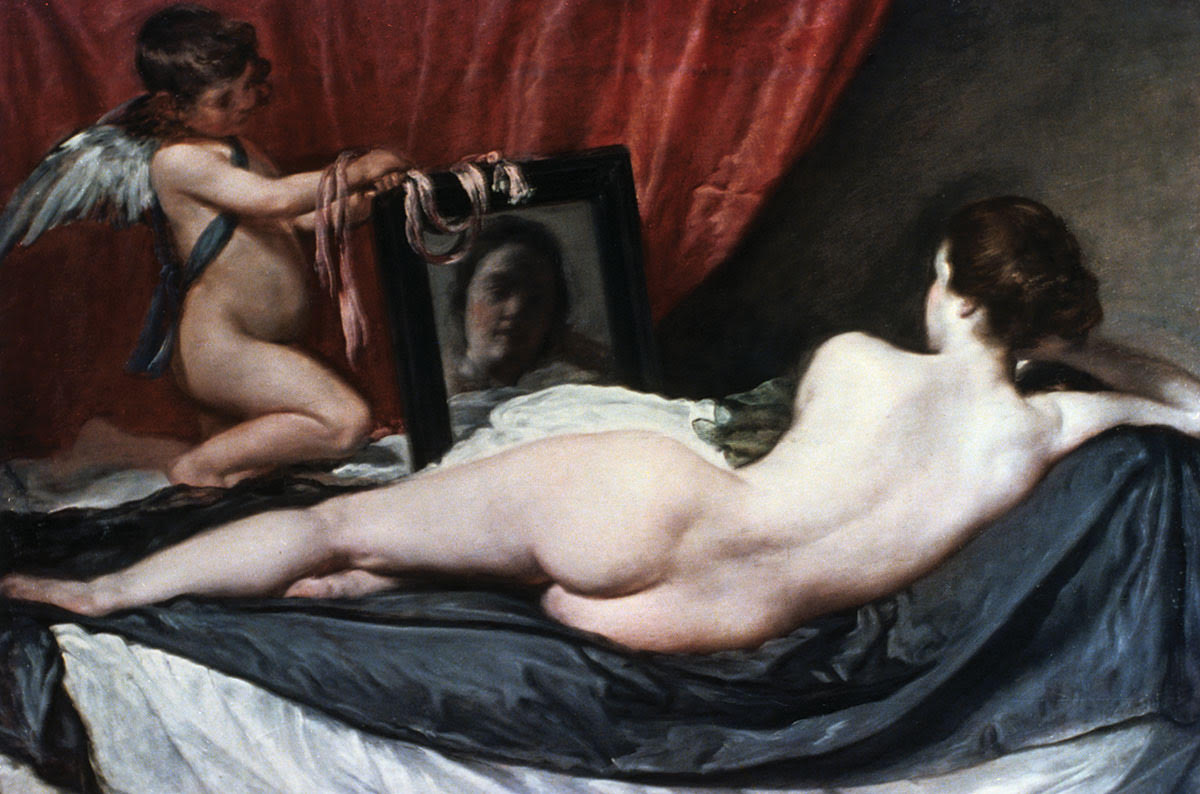 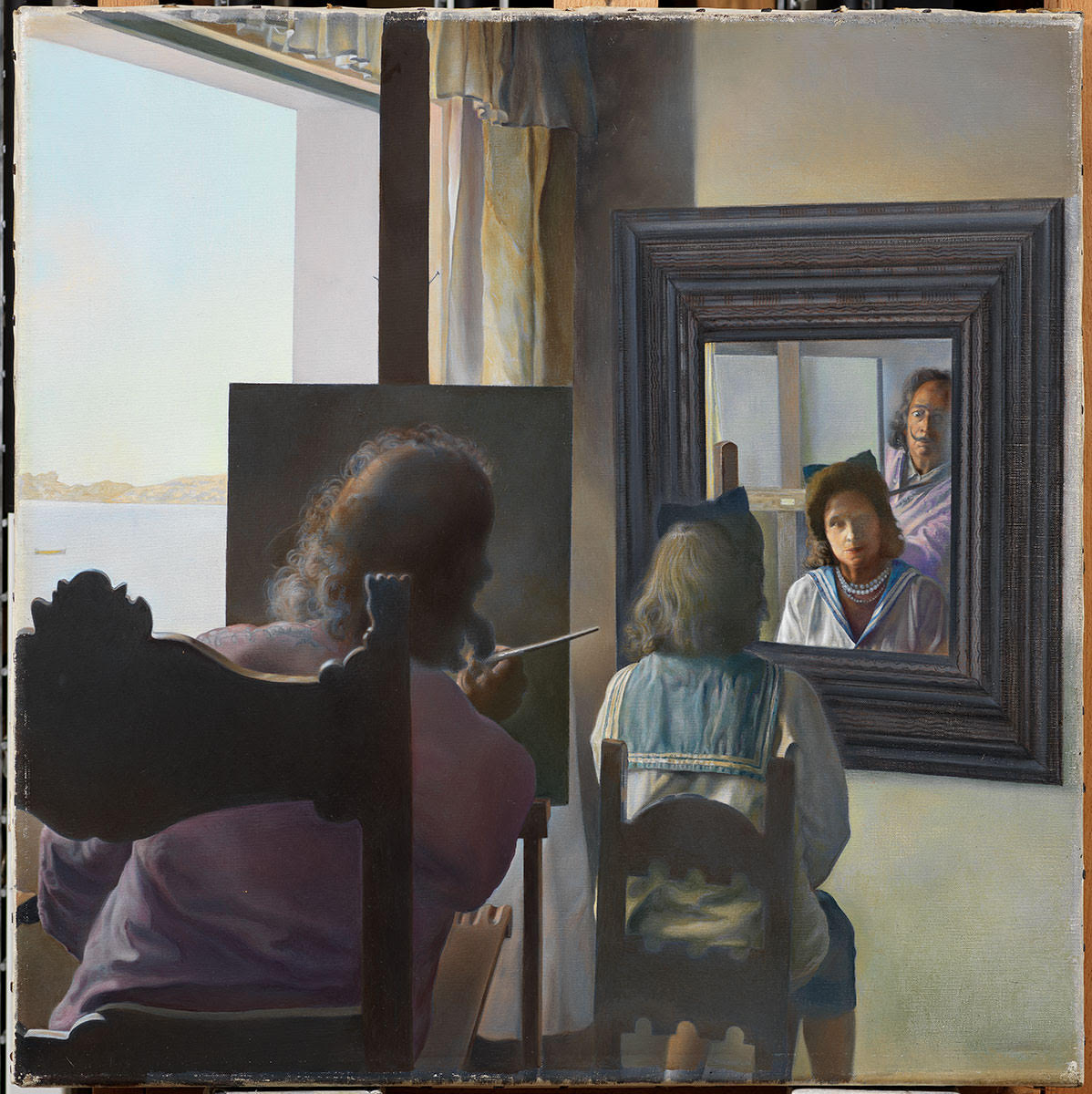 Dalí Seen from the Back Painting Gala from the Back Eternalized by Six Virtual Corneas Provisionally Reflected by Six Real Mirrors, by Salvador Dalí, 1972-73.

Translated from the original on Vogue Portugal's The Mirror issue, published january 2021.
Full credits and spread on the print issue.