English Version | Rebels with a cause

What would be of Fashion without its rebellion movements? It is hard to imagine, but it would certainly be more boring and a lot less charismatic. After all, these were the voices that added personality to the world. From hardcore punk to hippie, get to know some of the movements that gave an aesthetic to Fashion. 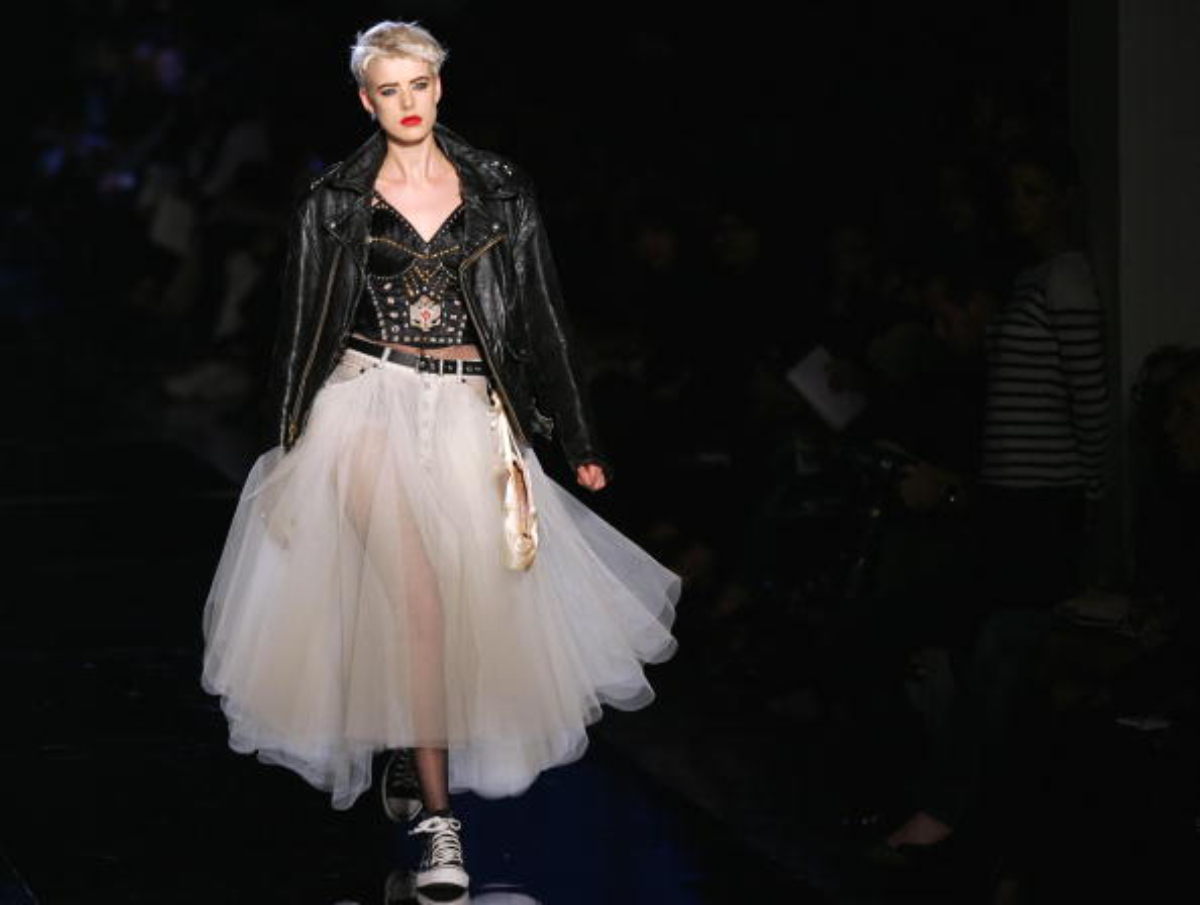 “I used to wear Fashion as a vehicle to express my resistance and to be a rebel. It was an ambition of mine to understand the world I was living in”. The words are from Vivienne Westwood, also known as the most faithful representative of the punk movement in Fashion. Music, anarchy, rebellion and revolution, punk is the mentor of all these irreverent movements. It has its place of birth in the United Kingdom and the United States around the 70s, and it intended to be a cry for rebellion against the general structure of these countries - unemployment, disbelieve, and lots of poverty. The norms were challenged through a variety of ways: leather jackets, chains and spikes, t-shirts referencing punk bands, military boots, piercings, tattoos, the loudest hair colours, crazy make-up and lots of black. In Fashion, the British Vivienne Westwood was in charge of starting to spread the punk style and feeling, a job which she shared with her boyfriend at the time, Malcom McLaren, also known as “the father of punk”. While heading the Sex shop, the couple was the responsible for the transgressor look of the band Sex Pistols. They were the first to sell leather clothes, at a time when the hippie movement was the most popular. Besides this designer, also Jean Paul Gaultier took punk Fashion out of the streets and translated it into runway looks. Today, there are many creators who draw inspiration from this style when showing their edgier sides - season in, season in.

It is still called today “the sound of Seattle”, because it was precisely in that area of the United States that the grunge music genre was born, during the 80s. The term in American slang means something like “someone or something that is repugnant” or yet “dirt”. Let’s stay that, just like with the majority of the movements that emerged directly from the underground scene, it is not a kind word to describe it. Still, its style winged at Fashion and Fashion surrendered. In the beginning, this movement was led by an anti-Communist spirit which advocated that, the lesser the amount of money spent on clothes, the cooler they would be. The worse the look - junkier or sloppier - the better. Charles R. Cross, music journalist, used to comment about the look of Nirvana’s lead singer: “Kurt Cobain was too lazy to put on shampoo”. In fact, it was Kurt’s long and messy hair, as well as his ripped jeans, his old shirts and his torn sneakers, that would end up establishing grunge as a Fashion trend. Designers like Marc Jacobs, Perry Ellis or Anna Sui fell in love with the Seattle style, showing in their collections elements allusive to it, right from the 90s. Today, the American brand R13 is probably the one that better represents the “I don’t give a shit” look that grunge is all about: slip dresses, prints that vary between leopard and chess and platform boots, are some of the pieces common in its collections.

A few issues ago, Vogue Portugal showed how Fashion and music have always been hand in hand. It is one of those relationships where we do not know exactly who came first, if the chicken or the egg. The fact is that one and the other influence each other mutually ever since the world is the world. Therefore, the rockabilly look is just one more of the most praised styles that, because of its strength and power - visually and in terms of lifestyle -, ended up becoming in itself a Fashion trend that would last until this day. It was born as a music movement, somewhere between the 50s and the 60s, and it was a kind of a mashup between “rock” and “hillbilly”. Its clothes reflected the style of the musicians from that season: jackets with popped collars and the very particular footwear worn in the 1950s, we now know by the name of creepers, which were basics and essentials for this look. Besides these, Levi’s jeans (501 or 505) among other casual garments, such as biker jackets, created the rockabilly look. Today, this style, and its vintage American cousin, are the most glamorous alternatives to pin-ups. Much like pin-up, rockabilly is accessible to women of all shapes and sizes, as it celebrates curves and body diversity. Women’s rockabilly fashion is characterised by heart-shaped necklines, high-waist pants, kitten heels, “out of the box” sunglasses, tattoos, neon hair colours, as many as needed hair accessories, and also piercings.

The goth subculture in Fashion was born from goth rock, a music genre originated from punk rock and post-punk, in the late 1970s. This subculture is known for having a grim vision and a well-known fascination for dark themes. It is not by chance that the colour elected by this movement/trend is black. In his book The Death Proclamation of Generation X: A Self-Fulfilling Prophesy of Goth, Grunge and Heroin (2008), Maxim W. Furek noted that: “the goth is a rebellion against the Fashion movements of the 1970s”. Besides black clothes, the hair is also painted in dark shades, creating a creepy contrast with the skin tone, which is wanted as pale as it can be. The goth style is equally characterised by the copied elements allusive to church, like crosses. Among some of the designers that better represent (or represented) the Haute Goth, there are names like Alexander McQueen, Rick Owens, Gareth Pugh, Ann Demeulemeester, Philipp Plein, Rei Kawakubo and Yohji Yamamoto. It is, howeveer, the name of Riccardo Tisci for Givenchy that comes to mind when the subject is the gothic trend in Fashion. Named by the Financial Times as “The Goth Samaritan”, if he is not the owner of this trend’s monopoly, then he is certainly the person who wears the best compliments - Tisci left us wanting to wear goth, and that is talent.

There are many inspirations that made the streetwear culture popular, but the biggest of them is skate - and skaters. If there is any doubt, let us recall the biggest names in street style nowadays: Supreme, Trasher or Palace, all of them brands that originally created clothes for skaters and that ended up being elected by many non-skaters. And by Fashion, of course. Once considered dark, these types of brands gained masses of cult-followers, in particular the Hypebeast/Hypebaes, a community united by the love for streetwear style. The exorbitant and hyper popular collaboration between Louis Vuitton and Supreme is a great example - or why would a big fashion house collaborate with a streetwear brand if its not to gain the recognition of a different type of public and a new market niche? In an article published by American Vogue, it reads that “the last decade saw luxury Fashion concentrate on skate and it subculture clothing codes”. The skater style originated from the so-called The Z-Boys that, in the streets of Dogtown, carried their little surf boards (the skates) with them every time they could not surf. These young people brought energy, style and rawness to the sport. The clothes that they wear reflected, on one hand, their lack of money, but on the other hand, their need for movement in order to be able to perform even bolder manoeuvres.

In his collection for Fall/Winter 2017, Marc Jacobs placed his models on a naked runway in Park Avenue Armory, New York, wearing sweaters covered by thick golden chains, retro style jackets and eccentric hats. The collection, said Jacobs, had been inspired by two things: on one side, the Netflix documentary that narrates the ascension of a musical genre from the 70s to the 90s, Hip-Hop Evolution (2016); on the other, the memories from his own childhood in New York. “This collection is a representation of the sportswear style”, explained the designer in an announcement at the time. “It is an acknowledgement and gesture of respect for the polish and consideration applied to fashion from a generation that will forever be the foundation of youth culture street style.” And this is just one example of how hip-hop and Fashion are profoundly interconnected, a relationship that had its beginnings in the 70s, staying strong in the 80s and 90s. Today, it is also the stars of hip-hop that show to Fashion “how it is done”: it is the case of Kanye West with its line Yeezy; or the rapper ASAP Rocky, who is the face of campaigns for maisons such as Dior Homme or Calvin Klein. Even though the hip-hop community has been in love with the world of Fashion for far too long, this appreciation has been reciprocated in the last years as luxury brands, including Balmain and Saint Laurent, embrace hip-hop artists and imitate part of their aesthetic.

The term was created by the trend agency K-Hole through its 2013 report. Under the title Youth Mode: a Report on Freedom, normcore was explained as a trend that “moves away from a coolness that relies on difference to a post-authenticity coolness that opts in to sameness”. Designed to be a kind of an antidote against extremely ornamented and styled collections, this trend puts emphasis on casual looks that, long ago, would have been interpreted as anything but Fashion. Translated by its colour palette that varies from white to black, beige or grey, in normcore there is no room for prints and logos. The American designer Alexander Wang stands out in this style. His first collections were mainly composed by basic pieces that hardly came out of that colour universe. Just remember his T-line, a collection of basics made by the designer that always privileged the excellence of materials. Not long time after, we were able to see Vetements, from Demna Gvasalia, giving a certain kind of a continuation to this trend (with some nuances). Vetements, that means “clothes”, was all about reflecting a philosophy of not possessing a sub or a supra-identity - Gvasalia created clothes to be worn. The designer added, however, other basic day to day garments - as unpretentious as a DHL t-shirt could be. The same became viral and the price of the item that for so many years had gone unnoticed started costing more than a fortune.

Placed partially on the opposite side of all those other mentioned counterculture movements, here is the hippie movement. We do not mean to say that this was not a counterculture group rising against the system - actually, that was the hippies’ starting point. They manifested against a society that created misery, violence and wars (specially the Vietnam War). But it happens that the hippie’s cry for rebellion, unlike the majority of anti-system movements, was made peacefully and happily. It was a voice that came from a place of love - of peace and love, the slogan praised at the time, which marks the movement until today “Peace & Love”, or yet “Make Love not War”. Free love, respect for Nature, pacifism, a simple life without consumer worries were some of the ideals they followed. In the body, they worn colourful clothes, fringes, bell bottom pants, dyed and stained fabrics; their hairs were long and had many times flowers stuck by crowns; the use of hallucinogenic substances, which gave them the legacy of a psychedelic aesthetic. The hippie Fashion trend dragged until today and there is no season where there are no hippie style references. The most recent trend was tie-dye that, in the last two years, has emerged season after season on the most distinct houses: Tom Ford FW 2020, Proenza Schouler SS 2019, R13 SS 2019, Versace SS 2020 ou Dior SS 2020, to name a few.

Originally translated from The Underground Issue, published October 2021.
Full credits and stories on the print issue.