English Version | “Animals don’t hate, and we’re supposed to be better than them” - Elvis Presley

Verónica Forqué. Cheslie Kryst. Hana Kimura. Three names inscribed on tombstones with the most violent of all scopes: the one that tears one's life apart. Verónica, Cheslie, Hana: three reasons why we should never, for any reason, let ourselves fall into the temptation to make hate a message, and to make that message fuel someone's suicide. 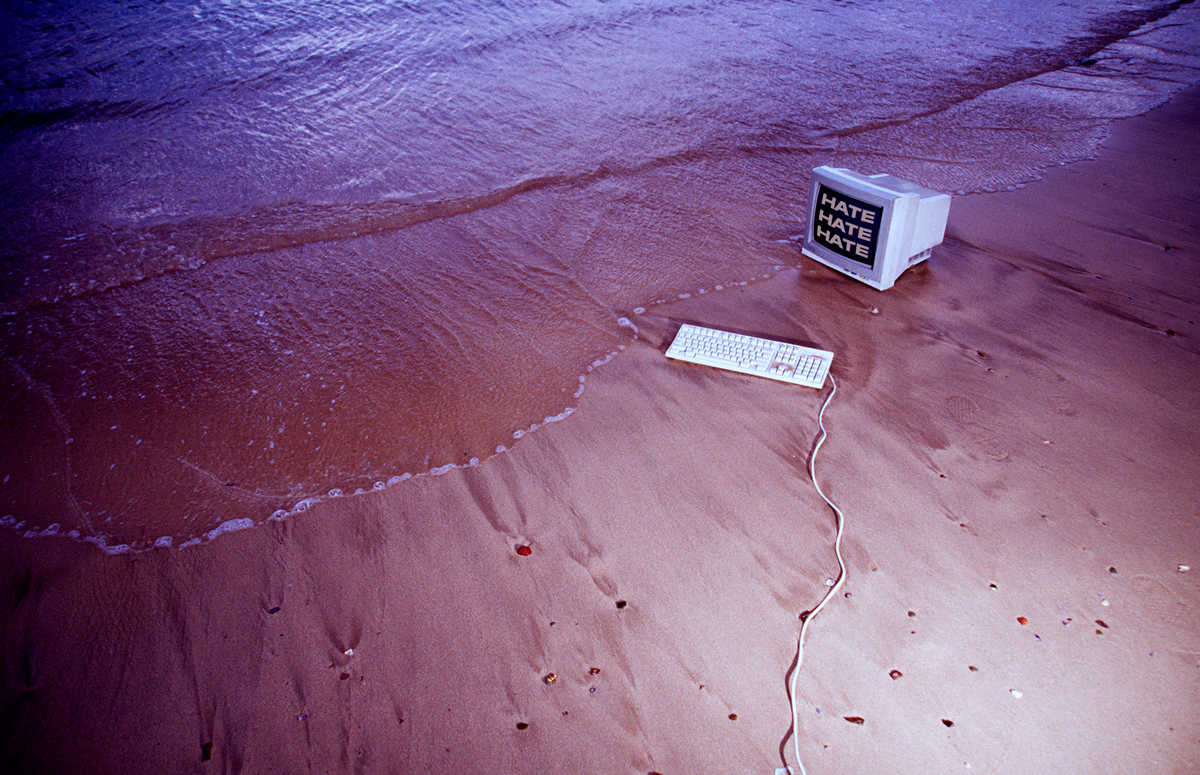 “Pepe, it's Veronica. Chef, I don't have good news. I don't feel well, I'm exhausted. I fought for ten weeks, it was one of the best experiences of my life. You know that. I'm a fighter and I'm learning a lot, what a shame, I'm sorry I can't live up to it but I can't do it, the body can't do it, I can't do it, wholeheartedly. I will return when I am well.” This was the voice message that Verónica Forqué, one of Spain's most renowned actresses, sent to Pepe Rodríguez, well-known chef and one of the hosts of MasterChef Celebrity, to justify her absence from an elimination test. The message was heard by her colleagues, Juanma Castaño, Miki Nadal, Belén López, Carmina Barrios and David Bustamante, all celebrities in Spain, who could not hide their surprise. And the discomfort. And the sadness. Verónica Forqué would put herself aside, for a while, because “mentally I couldn’t.” But she would come back, her trembling voice assured. She didn't. In the next episode, she appeared on the stage and announced: “I can't do it anymore, and I'm not one to throw in the towel, but I have to be consistent, I try to be, and humble, and if I can't do it anymore, I can't do it. My body and my universe were telling me I needed to stop.” That's how, last November 16th, Verónica Forqué ended her participation in the TV show for good. At the moment she handed in her apron, a metaphor for leaving the contest, the protagonist of Pedro Almodóvar's Kika (1993) said goodbye not only to the other participants and the thousands of viewers of that television format, but to all Spaniards. “Thank you, chef. I love you. I love you”, she said to Pepe Rodríguez, visibly moved. On December 13, less than a month later, the 66-year-old artist, winner of four Goya awards, was found dead in her Madrid home. She had hanged herself in the bathroom. Forqué had an extraordinary career, divided between film, theater and television. She was a living legend of the stage — the kind of legends that, as they say now, “are no longer made.” Still, that didn't prevent the downpour of criticism for the “flamboyant” posture she showed during her stint on MasterChef Celebrity. By the time she decided to put an end to her performance, Forqué was more of a laughingstock than the woman who filled movie theaters with hits like What Did I Do to Deserve This? (1984).

“Either the contestants would quit or Verónica Forqué would leave”, wrote a columnist for El Mundo newspaper. “What happened last night on MasterChef Celebrity is so heavy that I don't even know where to begin. What I do know is that the abandonment — or not — of Verónica Forqué, although it was something unprecedented on the show, was the least that could happen to Vero [the actress’ petit nom].” The least because, according to media reports from nuestros hermanos, the actress was “improper”, “rude”, “hysterical”, “abnormal.” Her companions were “more afraid of her than of Freddy Krueger”, the author of the aforementioned review assured. To mention her by name would be to give her a status she doesn't deserve — it would mean putting her on the same level as Forqué, who confessed her weaknesses in front of millions of viewers and yet did not earn the forgiveness of those who, on Twitter, compared her attitudes to the killer Chucky toy and the characters from Squid Game, reproducing her crazy image to exhaustion in memes of dubious taste — and who nevertheless couldn't stop watching her, week after week, on MasterChef Celebrity. Her public catharsis escaped the pre-rehearsed script of the gigantic reality show she lived in (that we live in?) and her colleagues were unable to reciprocate with empathy. Forqué's pain was too real. It was too uncomfortable. It was not compatible with the likes and ratings that depended on her “insanity.” It didn't fit on a television screen, much less on a computer monitor where, these days, decisions are made about who should or shouldn't be “cancelled.”

“May this day bring you rest and peace.” Cheslie Kryst posted this message on her Instagram profile, where she had over 600,000 followers, on the morning of January 30. A few minutes later, around 07:15, she jumped from the 60-story building where she lived in New York City. The model and lawyer, known to the public for winning the Miss USA pageant in 2019, was also a reporter for the ExtraTV channel. She left a note in which she showed willingness for her mother to be the one to keep all of her possessions — she did not, however, mention any motive for the suicide. There are, nevertheless, several theories that point to the pressure and harassment that surrounded her since she became "the prettiest girl in America.” Cheslie was 28 years old when she was crowned. According to the (unrealistic?) parameters of some unconditional Miss USA fans, she was “old.” There was even a petition to lower the age limit for contestants. “Each time I say, 'I’m turning 30,’ I cringe a little. Sometimes I can successfully mask this uncomfortable response with excitement; other times, my enthusiasm feels hollow, like bad acting.” This is how her essay, published last May in Allure magazine, began, detailing her journey as a student, a beauty queen and, above all, an empowered woman — Cheslie Kryst was ambitious, except that ambition was seen as something negative; she was successful, yet each new achievement was seen, by others, as a way to “hide her weaknesses.”Victory, in 2019, only exacerbated those problems. “Pageant girls are supposed to be model-tall and slender, don bouffant hair, and have a killer walk. But my five-foot-six frame won with six-pack abs, earned after years of competing in Division I Track and Field, and a head of natural curls in a time when generations of Black women have been taught that being ‘too Black’ would cost them wins in the boardroom and on pageant stages. My challenge of the status quo certainly caught the attention of the trolls, and I can’t tell you how many times I have deleted comments on my social media pages that had vomit emojis and insults telling me I wasn’t pretty enough to be Miss USA or that my muscular build was actually a 'man body.’” And that was only her appearance. Her opinions bothered even more. Apparently, Cheslie had it all. She lived in a luxury condominium. She had been nominated for an Emmy for her work in television. She had a number of projects. Her death came as a shock to those who only knew her through a filter of glamour — which she always tried to cleanse. After her death, it was learned that she had long been struggling with depression. The toxicity that surrounded her, namely online, did not allow her mental health to protect herself from those who were asking her to kill herself. She eventually did.

“I love you Hana.” When I first visited Hana Kimura's Instagram profile, this comment had been written only seven hours ago. It was one of several messages that followed the same tone (a mixture of affection, dismay, and longing), despite the fact that the account has not been updated since May 22, 2020, when the JWP pro wrestler published her last post. The next day, she committed suicide. The thousands of people who now sign this virtual condolence book, unable to cope with the disappearance of the 22-year-old, could not stand up to an invisible but powerful hatred, propagated by so many others. In the weeks before her death, Hana was slaughtered in that court of public opinion that is the Internet, much to the cost of her participation in the reality show Terrace House — her outgoing personality annoyed some viewers, who did not forgive her supposed lack of femininity, nor the “dark skin” she had inherited from her Indonesian father; they also disdained her appearance, disgusted with her muscular build, calling her a “gorilla.” The verdict of this amalgam of judges without toga or empathy was clear. They wanted Hana to “disappear.” They told her so again and again, about “a hundred times a day.” In a plea for mercy, her response was that of someone who has already given up fighting — she just doesn't know she has given up fighting yet: “If I do this will people like me?” No one could answer. Hana Kimura struck dozens of blows to her wrists and arms, and before long the world was “free” of her presence.

What would those who couldn't stand her hair be doing then — would they be hiding, ashamed to know that one day, protected by the deceptive power of the universal keyboard, they uttered yet another disgusting, hostile remark just because they were bored or because they hated things about themselves, helping to kill this girl they knew so little about? I wonder how the daily lives of the trolls who couldn't stand the fact that Hana was a bubbly, happy-go-lucky person changed, for the better — did they suddenly get a promotion, win the lottery, find a soul mate? According to The New York Times, Facebook, Twitter, and the Japanese chat app Line, issued a joint statement shortly after the tragedy, assuring that they would take steps to reduce personal attacks on their platforms. Among these measures was the eventual banning of users who “intentionally” demeaned others. This decision was heavily criticized for allegedly being a limit on free speech. However, in late 2020, Japan's police opened a case against a 20-year-old Osaka man suspected of “indirectly” interfering in the death of Hana Kimura. The individual allegedly committed harassment and cyberbullying. Among the messages he sent were “You have a horrible personality, is your life worth living?” and “Hey, hey, when do you die?” In May last year, the man was ordered to pay a fine of 70 euros. Twelve hours ago, a fan wrote on @hanadayo0903: “Next month will be two years.” The dedications continue, addressed to an immense void.

Translated from the original on The Quote Issue, published in April 2022.
For full credits and stories, check the print version.