English version | Before it was “Forbidden to Forbid”… What about Now?

The world keeps spinning round, it doesn’t evolve in a straight line, from darkness to light. The euphoria and hope for freedom of the 1960s turned into this sort of stiffness where we need to stop and think twice before saying or doing anything at all. 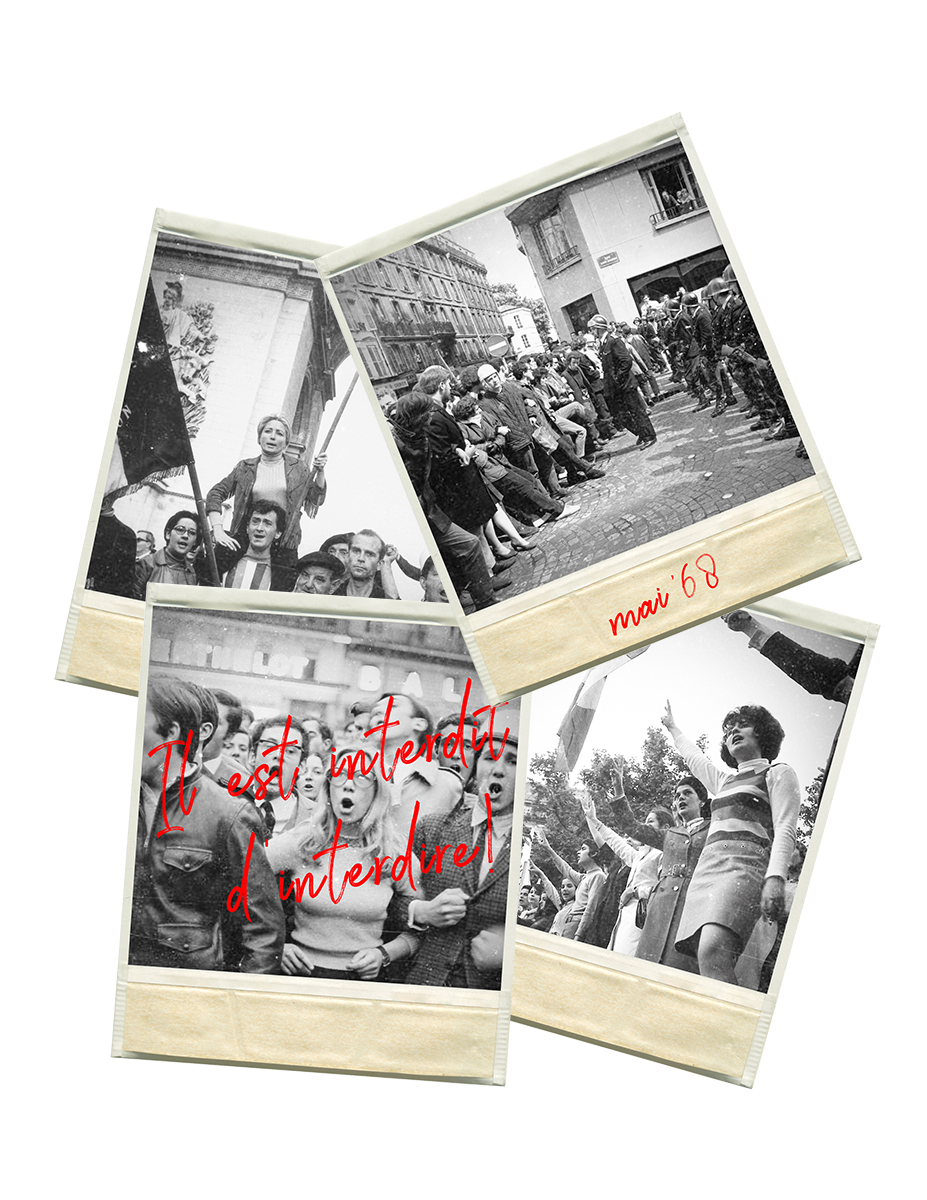 It is intuitive, and everybody knows it: there is no world culture, perceived as the set of knowledge and beliefs that define Humanity’s behavior. Certain manners are accepted in the West and frowned upon in the East; socializing is done differently in the North and the South. Plus, there are cultural variants from country to country, even though they share the same historical roots. What we call “occidental values.” Or “African traditions.” Besides, we justify “our” values and criticize the ones of “others.” It has always been like that and always be; there is no globalization when it comes to moral values. That being said, we, the occidentals, and we, Portuguese people, live in our own social reality, which may or may not have been compatible with others, though they are cotemporaries. Sometimes there are movements, like big waves, that seem to encompass the entire ocean, though they break unequally on different beaches. In the 60s of the previous century, there was one of those storms. Quickly enough, the “occidental world” revolted in criticism of the values that ruled over it until then. Youngsters realized that they were living corseted within prejudice and preconceived notions that no longer suited them. They didn’t like to be told what to do. They yearned for political and behavioral changes. They rebelled. Literally.

In France, a country that, since 1789, with some back and forth, has always been considered as a reference of freedom, the rebellion made History: “May of 68.” It was kickstarted by the revolt of Nanterre’s students, and soon after the ones of Paris, led by the notorious Daniel Cohn-Bendit (“Dany, le Rouge”) and was immediately validated by intellectuals such as Sartre, Lacan and Foucault. In the United States, where democracy is more of an exportation buzzword than an internal value, the hippie movie was born, driven by the words of Jack Kerouac, Allen Ginsberg and William Burroughs, and the music of Frank Zappa, The Velvet Underground, Led Zeppelin and so many others. At the same time, the fight for the rights of black people was renewed, led by Martin Luther King, and gay people openly confronted the police for the first time (Stonewall, New York, 1968). In Brazil, there was Tropicália, with artists such as Caetano Veloso and Raul Seixas, and the “left-wing” intellectuals. In fact, it was Caetano Veloso who composed the famous song É Proibido Proibir, translated from the iconic graffiti found in the streets of Paris, “Il est interdit d’interdire”. It was in the United Kingdom, where, although a precursor of parliamentarism, was extremely conservative, the movement later called the Swinging Sixties, personified by Beatle’s humor, the Rolling Stones’ provocations, David Bowie’s androgyny and Mary Quant’s miniskirt. In Germany and Italy, the terrorist radicalism of the Red Brigades exploded. Even though not all movements were openly political, nor were they even organized, they were clearly anti-system, both in a political component per se – to take down the previously instructed order – as a behavioral one – “free love”, the choice of sexual preference, the escape by drugs.

Protesting through writing, art and, above all, in the streets, was the way people found to react to the oppression of established norms and, in authoritarian countries (which were many at the time), against the heavy hand of power. And there was a lot to protest: in France, the authoritarian presidentialism of Charles de Gaulle and the rigid teaching system; in the United States, the Vietnam war, racism and social inequality; in Brazil, the military dictatorship enforced in 1964 by the A15 bylaw. In Portugal, under the dictatorship of the Estado Novo, in 1961 the Colonial War started, which led to the stiffness of the regime that forced young men to risk their lives to defend the values that meant nothing to them. From 1967 onward, there was a permanent student contestation situation, with strikes and police repression. Besides the political inflexibility, the State exerted moral control over behaviors, down to the detail of prohibiting boys from having long hair. Censorship wasn’t just applied to the press; books that were considered an attack against “morals and good practices” were forbidden and apprehended. Portuguese intellectuals, with no means to contest, preferred to emigrate. To sum up all this commotion into a single idea, we could say that there was a strong belief that the world was moving towards better days, of peace and liberty. However, despite open protests’ deaf resistance, the results were not immediate. Only in the following decades, in the 70s and 80s, in a time when the young rebellious people had grown up and faced the realities of life, were some of their aspirations institutionalized. Dictatorship regimes fell (Portugal, 1974; Spain, 1975; Brazil, 1985; Soviet Union, 1989), the Vietnam war ended (1975) and, in general, the occidental world entered in a period of liberty and acceptance of “habits” previously considered as immoral. To forbid didn’t become forbidden, but it was out of fashion.

The dream was fulfilled, so is this the end of the story? Not really. The so-called End of the Story does not exist. That myth was created by Marx, to the left, and by Fukuyama, to the right: where we would reach a perfect and stable social situation, therefore there would be no need for evolution. There is a book by the Catalan sociologist Manuel Castells, titled Redes de Indignação e Esperança (2012), which explains why this nice idea never happened. And it has nothing to do with a socialist society or a capitalist paradise. To cut a long story short, what happened between the collective dream of the decade of 1960 and the fragmented reality of the decade of 2020 was a technical development with unimaginable civil repercussions, the Internet. Social networks, that forum of communication both personal and universal at the same time, completely changed the dynamics of our relationships and, consequently, the perspectives and expectations of people. We’re still at the beginning of this change and many of us have not yet grasped its reach, though we’re already living in the middle of the vortex. Governments, power, are not the ones deciding what is good or bad (though some, in certain countries, hold on dearly to that); the decision of our values is out in the loose, in a wild mix of personal opinions, cantoned in thousands of groups that consider themselves the owners of the truth. The right to forbid or to allow has lost its meaning. Nothing can be prohibited, but nothing is also allowed by these movements that have formed, so jealous of their own perspectives that they refuse to consider any alternatives that might challenge them. From a permissive society, we’re now in an authoritarian society. If all this sounds a little too abstract, all it takes are some concrete examples. Isolated cases – there are millions of them – that show how the so-called “politically correct”, or “cancel culture”, have transformed the dream of equality into a bible of irritated norms.

It is the case of the legendary Oscars, the Hollywood awards which, since 1929, have rewarded those the North-American cinematographic industry considers as the best movies (and all that is intrinsically connected to them, from performances to the soundtrack) and, implicitly, the ethical values the seventh art should embody. Pedro Gomes Sanches, sociologists, shared online in the newspaper Expresso, a sarcastic analysis of the values that are actually in place, which we could not have resumed any better: “In order to be eligible for the Oscars of 2024, the movie has two fulfill at least two out of four standards. The first standard is to ensure one of the three following conditions. First condition: the lead actor or actress or one of the main supporting ones has to be Asian, Hispanic or Latino, black or African American, indigenous, native American or native from Alaska, Middle Eastern or North-African, native from Hawai or from a Pacific island or of yet another race of under-represented ethnicity. Second condition: at least 30% of the supporting actors need to be of at least two of the under-represented groups; meaning: women, ethnic or racial groups, LGBTQ+, or people with physical or cognitive disabilities, or deaf people. Third condition: the main storyline should be about one of the under-represented groups (the same ones as aforementioned). The second standard should fulfill one of two conditions. The first one is that two of the department directors (casting, cinematography, composing, props, hair and makeup, etc.) belong to one of the under-represented groups. The second one is that at least one of them respects the first standard’s condition.”

Another case to be discussed is the one of Amanda Gorman, the poet who recited at the ceremony when the American President Joe Biden was sworn in, in January. Amanda is young, black, and the daughter of a single mother. The poem, The Hill We Climb, was shared a little all over the world, and ended up becoming a book, published at the end of March, and various foreign publishers decided to translate it. However, drama arose around the Catalan and German translations, as they had been done by white men. It’s true, it seems that the “new normal” of the politically correct demands even that the translators are of equivalent ethnicity and morality as the author. And, as it is becoming more and more frequent, one case kickstarts the scrutiny of other previous ones which, at the time, were seen as normal. The moment Amanda Gorman and her editors showed they had a problem with the translations, the black writer Grada Kilomba complained about how her 2008 book, Plantation Memories, had been translated by a white male. This technicality led the historian António Araújo to speculate: “Who is it that can translate Amanda Gorman? Can a middle-aged man? Or is it that Amanda Gorman is the only one who can translate Amanda Gorman? Can a man translate feminist literature? Can a straight person translate the written work of a gay person? Can an agnostic give voice to the Bible? And who can translate the classics, Aristotle or Plato, Joyce or T. S. Eliot? Are we not jeopardizing, more than evidently so, with the creation of such barriers and limitations, the very universal and conversational essence of the act of translating?”

Freedom, even if inconvenient, has been replaced by a clumsy, when not ludicrous, sense of prohibition of all that might offend a certain status. Servants are now maids, blind people are now visually impaired, single mothers are solo parents. A particularly odd case is the title of Presidenta (a made-up feminine version of the word Presidente, in Portuguese), used by the Brazilian Dilma Roussef. A President is the denomination of those who preside, whether they are male or female. It is right there, dictated by grammar, the active participles as verbal derivatives; those who attack are attackers, those who rule are rulers. And those who don’t know this and still talk a big talk are ignorant. I could dig up thousands of stories, so many other examples. But you get the gist: this is where we are, in the decade of 2020. Oh, how I miss the gentle time when it was forbidden to forbid!