In this case, meaning when you think you've made a mistake but actually got it right. Case in point, designer fashion: as a rule, there are no regrets about failure, it will always be a lesson. Sometimes, design in error is just a beacon for innovation. 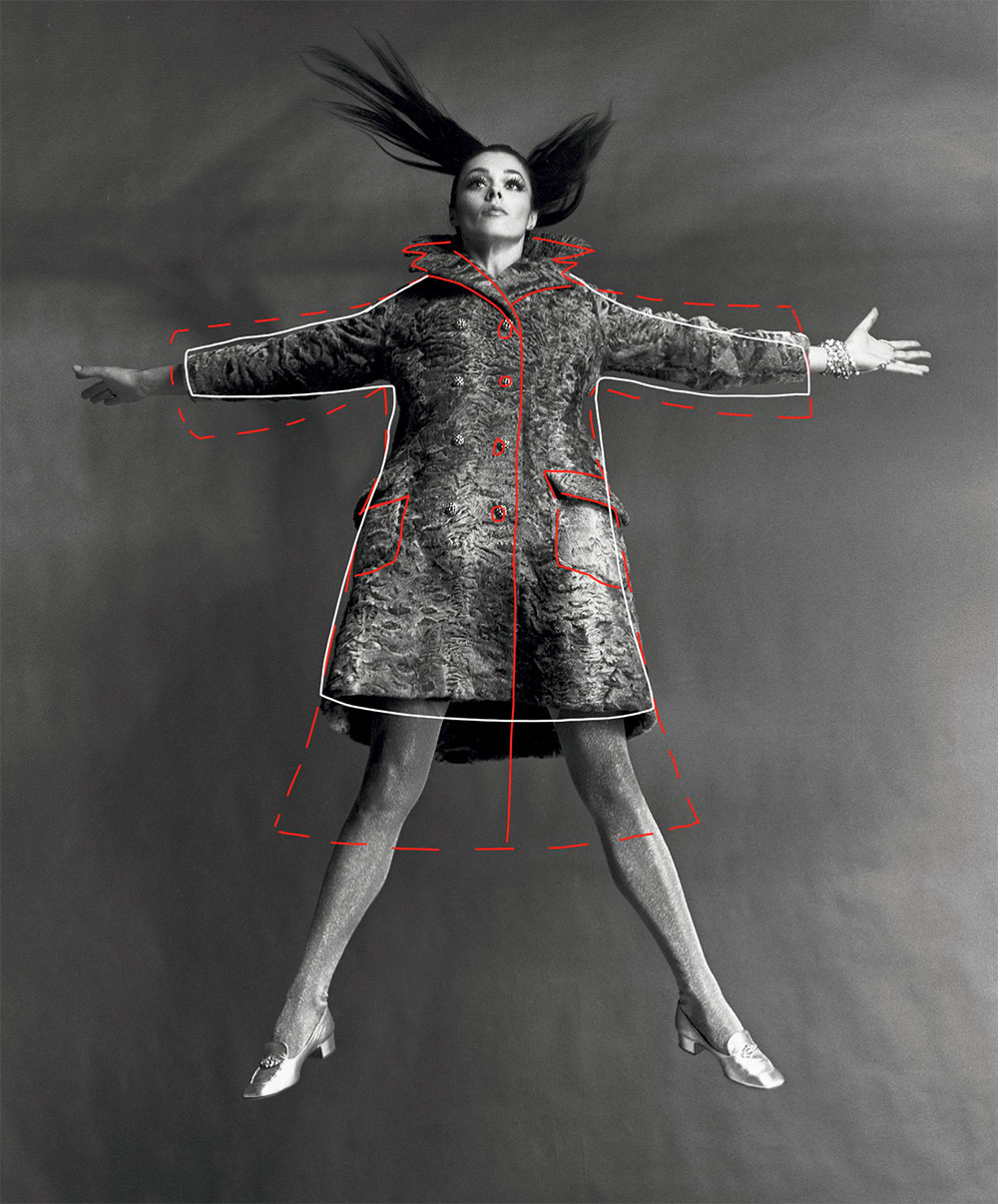 The trial and error method is a fundamental problem solving procedure and consists of repeating different hypotheses over and over again until you hit one successfully - or eventually give up. Regarding designer fashion, it even means accepting it. This term of behaviorism, i.e., an observable behavior as a case study for psychology, shows that this way for an organism to learn through a series of failed attempts until an acceptable solution is presented or when solutions are exhausted is a way of knowledge gathering. And in the case of applying it to the cutting and sewing business, the dimension is clearly noticeable. One day, many years ago, on the fairly known and busy main street of Príncipe Real, standing store-front of Alexandra Moura's shop, which no longer exists (perhaps a product of trial and error - the designer moved into a bigger studio and now sells online), I spoke to the portuguese designer about the role of experimentation in the creative process.

Today, we returned to that conversation. We were no longer on that street in Príncipe Real that everyone knows and where everyone goes; but neither were we, according to modern dictates, on a zoom call. As it happened, we were just on the phone, that old school device where only the voice is heard and no image is seen. It was not a trial and error call: we got it right the first time. “Designer fashion has that as a principle, trial and error, experimentation as a basis”, confirms the Lisbon designer. “This experimentation phase, especially when working with manipulation, when working with modifying the base modeling, when working with a series of processes while creating and trying to assemble the idea, whether on paper or in a mannequin, meaning already with the fabric, this trial and error is essential, because many times what we project in our mind gets better - or worse - when we start experimenting, when we start making mistakes and when we start to be surprised by the materialization of the piece or of the process that we are developing at the moment. Therefore, it is essential ”, explains Moura, whose silhouettes do not obey expected standards, which is why her commitment to constantly innovate, explore, surpass herself, implies a phase of trial and error.

Something that her fellow designer, Constança Entrudo, also knows well. Renowned for not considering preconceived notion on her work, her approach to creation involves freedom of the imagination, without constraints related to pre-existing rules or common frameworks, consistently opting to create new realities through a process of research and experimentation. It is not surprising, therefore, that the following is her first comment on this topic: “I would say that the basis of my entire creative process, or even of my brand, in general, is experimentation”, corroborates Entrudo. “I can even say that the experimentation for me is not even a phase, but a constant mood because, most of the time, even after it is finished and‘ presented ’, the piece remains just an experience for a future project.” In the creative process - in general, but in designer fashion in particular - to err means to move forward. Whether to understand the limits of an idea that breaks down barriers, or to, in a next piece/collection, master this process evolve into a new experimentation phase, just simply to raise it to another level. Which means that error is synonymous with learning, confirms Constança, as does Moura: “I learn a lot more when I make a mistake”, states Alexandra. “As in many things in life, we learn from our mistakes, as they say. It sounds like a cliché but, in fact, within it, we often learn much more technique from the piece itself when there is an error. Either because you are going to take it like it is and it is incredible, or because you are going to have to turn it around so that it becomes feasible. So there is a great deal of reflection here on the error and the error always turns out to be positive. It is definitely a learning experience. ”

It can also be a synonim for success: a mistake does not always have to be corrected; sometimes, many times, it guarantees the innovation of the final piece. “Many times, in fact, most of the time”, guarantees Entrudo. “Although my collections are the result of a long research work, I don't make a habit of designing clothes or using mannequins. My process goes through working for months on textiles and materials that will somehow become wearable. An example of an ‘error’ made into a final piece is the Threads Top, one of the most sought after pieces of my brand, which emerges from the joining of two fabric tests that had been ‘badly printed’ by me at the factory. I'm a little scruffy, as they say, and I get really excited when I'm at the factory with Paulo (textile printing specialist I've been working with since college). These two factors lead me to make many 'small mistakes', such as introducing the fabrics too early, inside out or with the wrong temperature. The results of these ‘small mistakes’ always end up in my collections.” "I don't know if it happened more often the mistake making into a final piece, or if everything went well at our first go, because there are pieces and there are techniques that are very clear in our head", explains Alexandra Moura. “Others are the ones you can more or less predict a detail, the volume, the trim, but that often in its construction, it reveals that it's not as simple as the mechanical process of idealizing it. So, I can tell you that maybe it's 50/50. Because there are those that are much more assertive, which we already know from experience and the modeling itself because it is already part of the brand, but the other half are those that are much more experimental, but these are often through trial and error in the mannequin itself, or in the fabric or in the mold itself, and we are surprised by the mistake. ” And he continues: “These last collections in which I work a lot with the deconstruction of the mold itself, and put together pieces that would not be together in the first place, that alone is a 'cause of error'. And then all you have to do is be aware of provoking it in a way that it can be wearable, in the end. There are the pieces that are purposely together, creating one, but I can tell you that, for example, the latter was derived in layers, and we went on to deform certain pieces because they had others on top that deformed them and created errors." So, making mistakes is not only human, is it creative? "No doubt about it. The act of making mistakes always comes from a new perspective. And new perspectives are fundamental for all of us, especially for the creative ones ”, assures Constança, corroborated by Moura: "To err is completely creative. Thankfully, we creatives made a mistake in our creative process because, often on the basis of an error, something new appears and, at times, much more brilliant than what we thought it was when it [seemed] perfect to our eyes. For me, it is clearly an evolution and an innovation. When it's like this ”, she says. “Not when something has to be straight and comes out curvy. It is the error when it works, when it is organic, not as a bad quality or poor production error. In that case, I'm a perfectionist, so I no longer allow these kind of mistakes. I don't allow sloppy mistakes.”

More than being creative, error often assumes, in designer fashion, a conscious dimension. It has a purpose, for the sake of design, of being unexpected, of making something new happen, explains Alexandra Moura. “In designer fashion, embracing error is very conscious. And many times there is the desire to provoke the error and to want to assume the error. Because the error itself and the perfection itself are concepts that can become abstract in creativity and for those who look at it. Often, errors emerge, or I happen to be touching a piece that, unintentionally, was badly pinned and that pinning went on to create a new thing. So, I think that when I assume them, many times, these errors turn out to be things that are perfect for me. This seems to be all a little abstract, what is the error and what is the perfect thing. While another person may look and think that it is a mistake, for me the piece is perfect for that very reason: for having the error. It is perfect because it is imperfect. Especially because I always like to escape a little from what stereotypes are. Even when choosing models, when choosing faces for the brand, I always like to go to the 'less perfect' mannequins in what the ideal beauty stereotype is concerned. I like the least expected. When there is a different characteristic here and there, that to me is my perfection, about the error or imperfection of someone who is stereotyped in another way", she explains, adding that" it is also a little bit to go against the tide in order to innovate … Mistake is innovation.”

A philosophy largely shared by Constança Entrudo: “Despite having a strong sense of organization, I am a little perfectionist and very easy to adapt to circumstances, whether good or bad. Mariuccia Mandelli [Italian fashion designer, 1925-2015] said that ‘Fashion is a matter of humor’ and I agree. I take my brand very seriously, of course, but I always add a sense of humor to it. I don't like to take myself too seriously, I think it's boring. I try not to let my team do it either, to acknowledge mistakes when they make them and to help them be better. I've worked in brands where making mistakes was almost forbidden and I never felt that it was good, in fact, I learned, but I felt that it was an obstacle to creativity. And that’s why it’s so difficult for me to categorize something as a ‘mistake’. My creative process is a constant dialogue between me and the material. The relationship I have with my fabrics is very personal, it is a constant behaviour of the materials concerning the e way I handle them. Throughout this process, I go through moments of frustration, euphoria or satisfaction. However, at no time do I interpret these frustrations as a mistake. Always a learning experience.” We misjudged. We thought we were going to talk about trial and error and ended up talking about trial and innovation. And of trial and lesson: “None of us are perfect when we do things. I have an ability to look at things and have a self-criticism and a self-analysis and ‘What would I do now again?’”, concludes Alexandra Moura. "I think that a creative person should look at their things not like 'I made this masterpiece come ito life and I won't touch anything else'. I think there is a little constant dissatisfaction and always looking for what you can do differently, that brings you something different, even if it is that piece that you keep reintroducing in a collection. I think that even here we are imperfect, because we are never satisfied. The creative person lives in a constant state of trial and error. ” I propose to change the expression "to err is human" to "to learn is human". And the first learning is that, in this attempt at evolution, there is always room for error, forgive me, knowledge.