It's something we wish the pandemic had been, a wee hour. Confinement, a past that continues to hover in the present, sets the tone for the images of the production these next editorial, placing the actress Milena Smit in a scenario that has become, for all of us, all too familiar. But a tiny hour is not something that fits the life of the star of Almodóvar's new film. Who has time for 15 minutes of fame when you're too busy conquering cinema forever and ever? 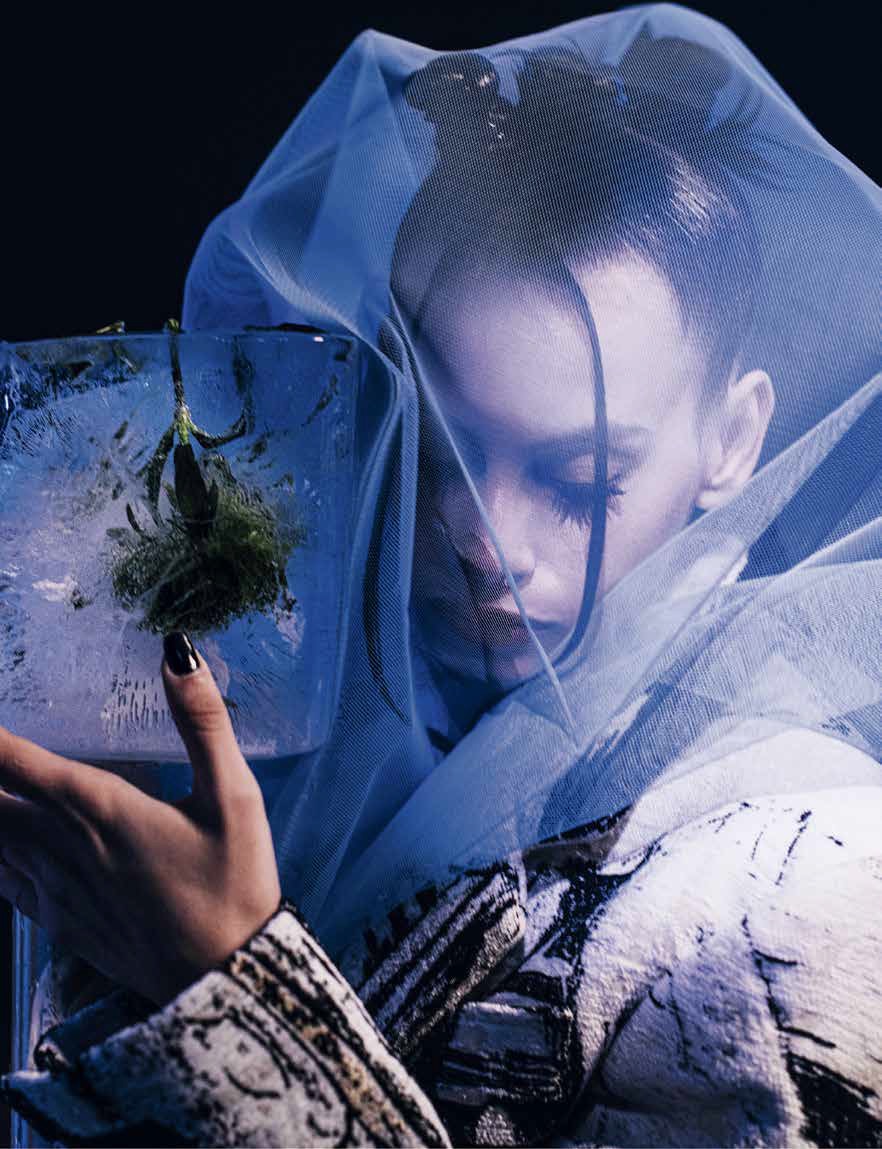 "Hora pequenina" - a tiny hour -, that phrase made for future mothers that expresses the desire for a short delivery birth, a title that's fitting in several dimensions here and not just because it uses a measure of time in an issue dedicated to it. The most recent work by Pedro Almodóvar stars two characters about to give birth in completely different ages, emotional situations and contexts but who, despite these discrepancies, form empathic bonds as strong as those of a long-standing friendship. On one bed, there's Penelope Cruz, that Pedro muse who needs no introduction. On the other, Milena Smit, Spanish cinema's new Cruz and, we bet, Almodóvar's muse-in-the-making, he who has already praised her widely in public. Not without reason: Smit (born Elisa Milena Smit Márquez), 25, only stars in her second feature film with Madres Paralelas (she has gathered a few short films along the way) following No Matarás (2020), a film for which she was nominated for a Goya Prize for Breakthrough Actress. She didn't win, but neither does she need it to assertively predict a long and successful path ahead. The awards are meager when her talent is innately manifested: “The first time I saw Milena was on Eva and Yolanda's computer screen, my casting directors”, Pedro Almodóver writes in an article for Vogue Spain. “She appeared dressed in total black and looks very oversize. Long hair, as dark as her sweater and pants. Clean face. She was the image of an amorphous, shapeless girl, but the moment she opened her mouth, everything changed. It didn't matter how she was dressed, those heron eyes, so peculiar, were instantly emotional, lighting up an innocent and hurt face.” In the text, he applauds her maturity, one of someone who has lived long despite her young age. He even says she has a thousand women inside her. Maybe that's why he talks about Milena's duality, the one who wears a tracksuit in an audition and the one who rules a red carpet in Givenchy. But, he assures, she is sweeping in both, a feature transversal to her acting. One could say that Milena's time is now, but the feeling that lingers in time is that Smit's now will linger into the future.

Your film career has begun strong - you were nominated for a Goya Award for No Matarás and your second feature film is with Pedro Almodóvar and costarring with Penelope Cruz. How long did it take for you to get here - do you feel that it was a struggle or too fast? It has been only two years since I finished filming No Matarás and only one since the film was released, from then on everything went really fast, I was still promoting No Matarás when I started auditioning for Madres Paralelas, sometimes I look back and it seems impossible that so little time has gone by. It is a very satisfying journey professionally but sometimes a little complicated on a personal level. I have had to learn to adapt to a crazy schedule and work rhythm and not let it overwhelm me. I always say that it is very easy to lose your mind when things like this happen, you have to learn how to take care of yourself and have people around you who love you and keep you grounded.

How did the invitation happen? And what did you feel when you got the call? Did you feel time stopped? When I started auditioning for the film, I didn't even know what the project was, we didn't have any information, it was only in the last call back that I found out it was Pedro Almodóvar's next movie. I remember I thought they were trying to fool me, it was impossible to imagine that this project could come when I had only begun.

How much time did it take you, in castings, until you got the part in Madres Paralelas? I started auditioning during the promotion of No Matarás, if I remember correctly in October 2020, at the beginning of November they already gave me the role, after 4 castings with Eva and Yolanda, the casting directors, and some rehearsals with Pedro and Penelope in his office, in El Deseo. From then on, we rehearsed for about 4 months until the filming began, which was another 2 and a half months.

Madres Paralelas shows a less polished version of motherhood. Do you feel this is one of the strong points of the movie? And what do you feel are the most important messages of the film? Of course, in Madres Paralelas we can see some imperfect mothers, as Pedro always describes them, it is very interesting for me not to see the typical model of exemplary mother because, this way it brings us closer to reality, nobody is perfect. I think one of the most important and sincere messages of this film is the empathy that each character shows and that makes the audience understand the good or bad decisions they make.

Which is your favorite scene? The birth was a scene that I really enjoyed, it was also the first day of shooting, so symbolically I was giving birth to everything that had worked on for so many months and bringing it to life from that moment.

There’s an expression in Portuguese that you say to women who are about to give birth that is “uma hora pequenina” - a tiny hour -, meaning wishing that the birth is swift. How much time do you spend working on a character before it’s ready to be “born”? And how did you prepare for your character in Madres Paralelas, how did you imagine her, once you read the script? Pedro was very generous with us, giving us so much time for the characters to develop and be ready to be born on set, it is a true act of respect for the actor. Every day I came home and kept working hard to be ready for the next day. I always imagined Ana as a very sweet and innocent girl and I think those qualities stayed with her in the film. Pure tenderness.

Do you relate to your character in any way? Which? For me, Ana mirrors a part of my life that I skipped because I wanted to feel older, I have been able to reconcile on a personal level with that part thanks to her.

“She has an emotional intelligence and a sincerity that are not learned in any school”, Almodovar has said about your performance. Do you feel that this is a fair assessment about the way you approach acting (as hard as it may be to analyze ourselves and our skills)? I always work with the characters from the intuition and the energy that they provoke in me, and it is almost always the right one, in my personal life I try hard to learn and develop my emotional intelligence and that is always a plus that I try to add to the characters.

And do you feel that a lot in acting comes from within and not from schools? Or it’s a bit of both? Of course, training gives you tools, but getting your feelings out, using your experiences, etc., help you to make a character real, to bring it to life.

This is your second feature film. What have you learned from Penélope Cruz that you’ll take with you for your next projects and life? And what have you learned from Pedro Almodóvar that you’ll take for your next projects and life? I think I have learned the same thing from both of them: to approach your work seriously and with passion and to fully give yourself to the moment. It is without a doubt, the best lesson I could have learned now that I am starting out at this.

The story for Vogue also focused on the time we all lingered at home, during quarantine because of the pandemic, and approaches all the uncertainties of the past two years. What did you do whilst confined and what helped you coping with all these uncertainties? One of the things that helped me the most to get through the confinement was to carry out a study on anxiety and other disorders that could appear in such a situation, and also in more general terms. I talked to 3 psychologists and a psychology student and then I did a live on Instagram trying to be a bit of a speaker with all the information that I had gathered to try to help anyone who needed it to better cope with the situation.

In Portugal, there was this notion that the quarantine show how much we rely on culture - movies, books, music - to help us relax and spend quality time, for instance. What do you hope this quarantine has contributed to, cultural-wise? To value culture, to give it the importance it deserves and of course its place. It has contributed and has been the support of many during difficult days, dead time and that should not be forgotten.

This issue is dedicated to time. What would you like to have more time for? To be with the people I love without a doubt.

How much time do you take in the morning to get ready for your day? I have a hard time getting up, and I love spending time in bed when I am already awake, but then also, many times I am working and when I am shooting I get up very early and in the end you get used to it. It depends on what period of my life I am in.

Translated from the original published on Vogue Portugal's Time issue, from December/January 2021-22.
Full credits and story on the print issue.