A divorce is never something to celebrate. It is the end of a life project that, for various reasons, did not go as planned. But if putting an end to a marriage is not easy, insisting on a failed union can be much worse. 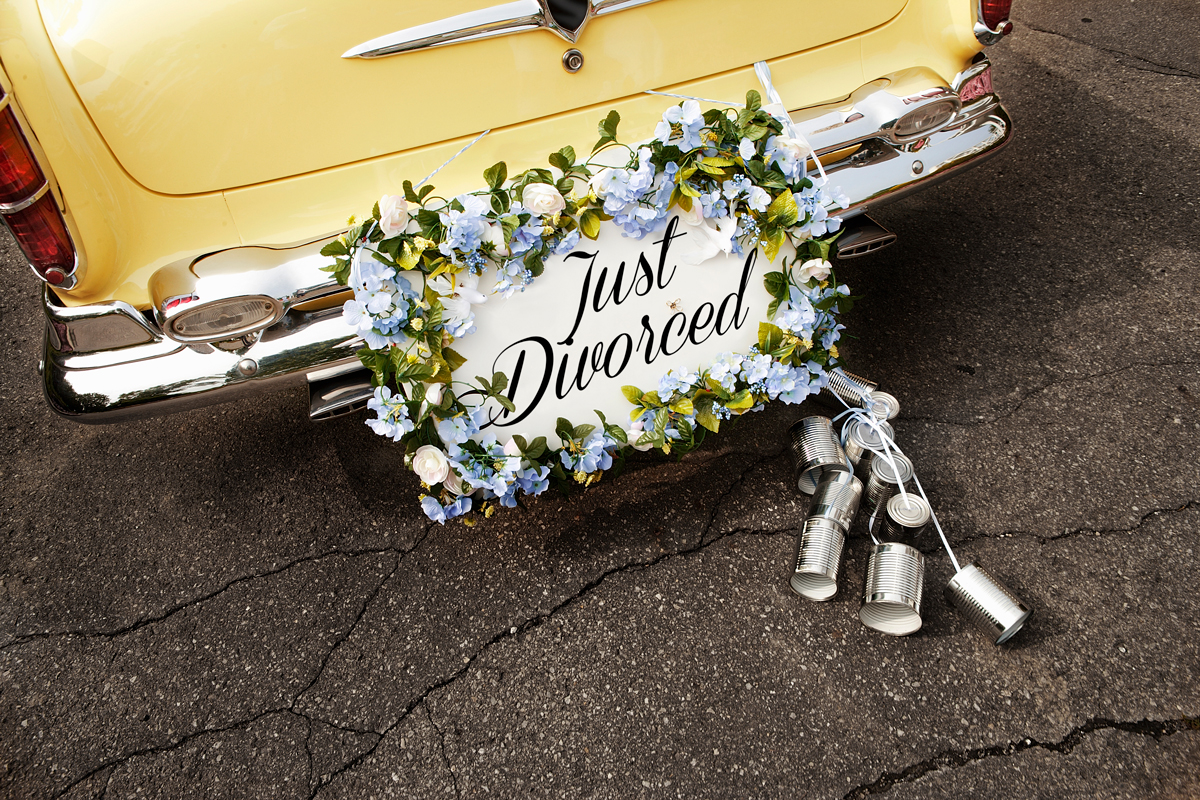 An entire childhood spent looking up to Disney princesses in their beautiful, long dresses, always accompanied by their enchanted princes, and the result is what you'd expect: women who look at marriage as if it marks a magical milestone from which to live "happily ever after." This is a saga that continues throughout life. Similarly, in the romantic comedies we watch in between yawns on a boring Sunday afternoon, "the end" is invariably preceded by the moment of marriage in which the couple prepares to "live happily ever after." The reality, however, is that there should be a "to be continued" instead of "the end." Because marriage is not the end of anything, but the beginning of everything, of another kind of story. Difficult? Absolutely. Challenging? Supposedly so. But happily ever after? It may be so, but it may not. And that's where divorce comes in. In the event that the "happily ever after" gives way to a "tremendously unhappy ever after," it is preferable to opt for the "happily divorced" — forever or not. And, as with marriages, some divorces can even prove to be quite laughable. Not being anyone's dream in the first place, it may very well be the direct path to a dream life — at least a fuller, more genuine one.

"When two people strive for a project as a couple, but over the years of living together end up changing their ways a little bit in a way that doesn't make them happy, less harmonious situations start to happen. I think that is the main reason why relationships end. My case was precisely that. There was a great deal of wear and tear between the two of us, and we came to the conclusion that in order to continue together, one of us would have to give up his or her essence. And I — and my ex-husband — considered that this didn't make sense and we ended up choosing to end this project of life together that was our marriage.” These are the words of Sofia Carvalhosa, divorced and happy with the split. She explains that there are divorces and divorces and that she considers hers a very positive one, especially when compared to many experiences she sees around her. It turns out that the notion that things might be bad, to the chance of divorce, can go a long and tortuous way. After all, as Sofia mentioned, this is a life project, and nobody gives up a big project lightly. Fernando Eduardo Mesquita, psychologist, clinical sexologist, and psychotherapist, explains: "Some couples seek help at the beginning of the problems, others only resort to specialized help as a last attempt. One thing is certain, as a rule, couples who seek help earlier tend to overcome difficulties more easily because they do not allow them to crystallize and contaminate other areas of their marriage." He assures us that the best solution for the couple is not always to continue together and that sometimes the best thing for the partners is to drift apart. "Therapy may help them find ways to deal with that decision." The role of the therapist, he stresses, is to point out various paths and help the couple reach their destination: "It is up to the partners to decide which path they wish to follow, which can be as varied as seeking to repair the damage done to the relationship; improving various areas of the relationship such as communication or intimacy; going to individual therapy (if appropriate); or even separation. The therapist's role is to help the couple walk the path they have decided." A decision that, in the end, is always the couple's, regardless of third party opinions.

Although the therapist may have the idea that the relationship doesn't make sense, this is a decision exclusive to the main actors, who are the partners. In other words, a therapist must not attribute judgments, even when faced with a couple with certain types of attitudes
and/or behaviors that go against their moral or ethical principles. If the therapist is unable to distance himself emotionally from these cases he should look for another colleague to refer the couple to." It can still happen even within the couple the discord "to divorce or not to divorce, that is the question." And in that case, too, the therapist can do nothing but a guide. "It varies greatly in how each of the parties perceives the relationship. Some couples present divorce as a decision and seek a therapist in order to expedite the process emotionally and to help them find the best way to deal with some issues they will have in the future (for example, childcare). In other cases, that decision may only be one of the partners' and the other may not take divorce so well." It is, therefore, best if the decision is made together, thus avoiding weariness and (even more) suffering: "When the decision is mutual, nobody gets hurt. Of course, there's a party that always gets sadder than the other, a little bit due to each person's way of being, but I don't think that happened to us. We still have a very strong friendship and this is also one of the secrets for things to go very well," explains Sofia Carvalhosa. Even when the decision is not made by a couple, the psychologist and clinical sexologist insist that "no matter how much you love someone, you should ask yourself if it makes sense to stay in a relationship where you are not respected. Sometimes, as difficult as it may be, the best decision is to separate. In some cases, partners communicate more and understand each other better after separation. It's a case of saying that divorce has brought together what marriage couldn't." And when there are children in between? The solution is, once again, common sense and respect between all parties. Sofia recalls: "When Inês' father and I divorced, she was very young. In the beginning, it's not easy, even for us adults, emotionally, to feel that she goes a little to the other side, she stays a little here... Because there is really that division. But I know that Pedro has always been a spectacular father, so I never stopped having confidence when she wasn't with me - which I think is very important. And the feeling is reciprocal."

Sofia believes that the children should never be a pawn in the middle of negotiations: "It's obviously an extremely important situation... Any divorce means the end of a journey to two and not necessarily a situation of radical cutting or disrespect. That to me is one of the mistakes that most people who have less good divorces make. And that is then mirrored in everything because people are hurt, resentful... If there are children in the mix it's terrible because unfortunately, and as we can see in many situations today, you end up using your children as a bargaining chip. And this is not good for the balance of any human being, and it ends up being reflected in the future lives of the children. And she continues: "From my perspective, and that of my daughter's father, the foundation for the life of a divorced couple with children to run 'smoothly' are such simple things as respecting each other, respecting your daughter, and trying, whenever possible, to be clear when asking for date changes, etc. We have very non-routine lives and very different schedules from most people - even this could be a challenge. And so far - and it has been over ten years now - it has gone very well. Of course, on the other side I have an extremely organized person and that, I confess, is part of the secret. But I think that, above all, it is to be aware that children come first and that we should - if we want to be parents - think about them and try every way we can to make their lives harmonious and happy. I think happiness is the key to any situation, option, or choice in our lives. And never forget: one day we may be the ones who want to be mean to the other side, but then the reverse can also happen. And so I think it's essential to put ourselves in each other's shoes and try to make sure that everybody gets what they want. It's not always easy, but it's just a matter of consistency. And pure feelings."

As divorce is the last resort, the figure of the couples’ therapist can appear much earlier in the lives of couples, from a preventive perspective. "The best known of these programs are associated with the preparation processes for religious weddings," explains Rita Fonseca de Castro, clinical psychologist and family therapist, in a text published in the Oficina da Psicologia. A study conducted in the late 1980s by Linda Waite, a sociologist from the University of Chicago, interviewed 5,232 married adults: 645 reported being unhappy in their marriage. Five years later, the same adults were interviewed again. Some had divorced, others had separated, and there were still those who remained married. The study — which somewhat devalues divorce — found that, on average, married adults who divorced were no happier than adults who had stayed married. Even unhappy spouses who had divorced and remarried were, on average, no happier than those who had stayed married. "One does not stay married just for the sake of one's children. Divorce is necessary, but results like these suggest that the benefits of divorce are overrated," Waite remarked. A divorce is never a situation to be celebrated - it is still the end of a life project for two. But it is, without a doubt, and very often, the best route. "As a divorced mother for more than ten years, I leave this advice: if we [the parents] are OK, the kids are OK. Because they are sponges, they feel everything we feel and replicate that in their essence. Especially young children, who are starting to build their way of being, and who keep those memories for life. The advice is to be well because if you are well the kids grow up happy." At the end of the day, we all want only one thing: to live happily ever after. A goal that one pursues at all costs, whether one is married, single, or divorced. To underline that status, all we need is our identity card.