English Version | Would you excuse me? 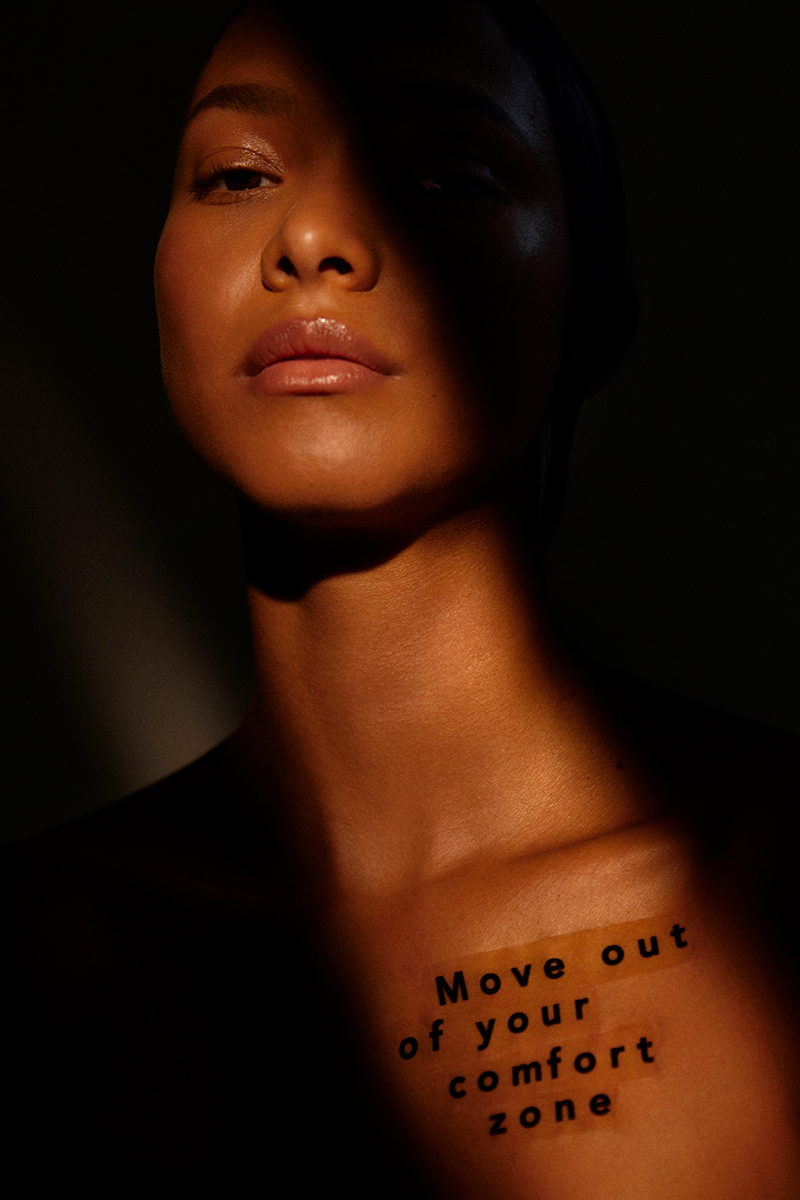 Brazilian. Alexandre's mother. Super model. From the top of her 1.84m, black skin and dazzling brown hair and eyes, Lais Ribeiro is a dream. Born in Miguel Alves, in the Brazilian state of Piauí, she began her modeling career at just 19 years old, leaving behind her desire to be a nurse. She lovingly recalls her childhood surrounded by nature, with friends with whom she played with freedom and security in the quiet streets of that northeastern city. Leaving Brazil was not part of her plans, but everything happened naturally, as she describes in a couple of e-mails with Vogue. “I took the opportunities that arose and ended up taking on new challenges, looking for opportunities to build a solid future, especially for my son, Alexandre.” But let's start at the beginning. It was 2009 when a friend encouraged Lais to try to embrace a different opportunity: to be a model. “I participated in the Beauty World contest held by JOY Management. Shortly after, I was already working in Brazil and in the international market. That's how it started,” she recalls. Overnight, she became the record holder for the spring / summer 2011 season, with more than 50 shows between São Paulo and Rio de Janeiro. And the international market was no longer a mirage. It was then that she realized that there was a decision to be made and chose to move on, heading towards the city that never sleeps - New York - without speaking a word of English. Since that moment, more than ten years have passed and many fashion shows (Chanel, Louis Vuitton, Versace, Gucci, Dior and many other fashion houses), campaigns (among them Michael Kors, Ralph Lauren and Max Mara) and numerous magazine covers. “It was not an easy decision, but it was something I needed to face, if I wanted to look for new horizons”, she recalls. “It was my first international trip and adaptation was not easy, especially in the first five years, when I was away from my family and missed having my son with me. At first, it was a huge but necessary challenge. I traveled to several countries, without a routine, and Alexandre needed to stay at home in Brazil, studying. Some time later, when I settled down, I was able to bring him to live with me and it was undoubtedly one of the most special days of my life.”

Alexandre was born when Lais Ribeiro was only 18 years old. In the course of life, women assume several versions of themselves and become a new version when they become mothers. Motherhood was not a burden for young Lais, but a gift instead. “Motherhood has a very transforming power in a woman's life. Alexandre was the greatest blessing I had in my life, and the process of maturity is quite remarkable”, she says. “You start to have with you a human being who depends on your actions, so this relationship that has been created since pregnancy is very transformative.” When asked about the most vivid memory of the time, she recalls breastfeeding. Although being Alexandre's mother fills her with joy on a daily basis, in 2013 her son was diagnosed with autism - a condition that needs, and very much, to be demystified. April is Autism Awareness Month, an initiative that aims to draw attention to the tolerance and acceptance of the differences that exist between us humans. Celebrating what sets us apart is important and it is also urgent to eliminate the association of the word “normal” with certain people at the expense of others. It is a process of constant evolution, where a lot of didactics are needed so that prejudices are fought against. “We need, more and more, to look at others with empathy, to understand that differences should not distance us, but rather unite us,” says Lais. “Living with differences makes us better human beings and better able to understand others. Alexandre teaches me a lot about it, every day. No one is the same as any other human being. We have always been taught by society that what is different is strange, and I believe that we must change this train of thought.” The change involves understanding that, contrary to what many people think, autism is not an impediment in a person's life, but a characteristic that makes him or her unique. For Lais, who has recently been following her son more closely in terms of schoolwork, it is important to have access to more information and more support on the subject. That's why she uses her influence and reach in the digital space to raise awareness and promote more compassion in this and all matters that need a little extra attention. In 2016, for example, she became an ambassador for the British sustainable brand Bottletop which, through the production of wallets made from bottle caps and other recycled materials, supports artisans and finances education and health projects aimed at children and young people in Africa, Brazil and other parts of the world.

Lais does not hold herself back when the topic is philanthropy: “I believe that time gets us involved with life issues to which we need to be linked to. It is important to give a voice and promote what, in some way, will bring positive reflection or effective change in people's lives. I increasingly believe that the visibility that comes with the career can - and should - be channeled towards constructive issues and actions.” She feels blessed with her journey and happy to be able to give back and use her platform positively, trying to inspire people and working together. “Throughout my life, I have met incredible people with a strong will to want to do more so that we have a better world and today I am honored to be able to be part of this movement.” She does it with all her heart. And it is easy, therefore, to understand the longevity and success of her career. It is based a lot on an attitude of gratitude and above all on the balance between her professional and family life. A balance in which she tries to keep her feet firmly on the ground, connected to reality and in which she understands “the gift that is living in the moment.” It looks simple. And when it comes to the present, it is impossible to ignore the giant elephant in the middle of the room: the pandemic. Something that is a no-brainer for Lais, who argues that this is the moment when we have to understand the importance of changing some habits that were previously common and harmless in order to save lives. “It is a time when we look for things that really make sense and are important in our lives. Our role here, how fragile we are and our impact on everything and everyone around us. In the face of so many challenges, with so many vulnerable people and suffering so many losses, it is very necessary for each one to look at themselves and what they represent - and how we can collaborate for a more harmonious future.” That's how Lais describes her mental space in the past year. A year in which we could not move freely, meet with friends, give hugs and in which we carried a great responsibility - that of the common good - as if it were a heavy backpack that we carry on our backs. As she matured, Lais stopped looking for future things and started to connect more and more with the present, with what exists today and just wants a world where there is more unity between people.

We took the opportunity to ask about her latest project as a host of the Brazilian reality show Born to Fashion, which debuted in August 2020. An inclusive show, much in the style of the iconic America's Next Top Model, in which the goal is to break prejudices in a didactic way and open space in the industry to transsexual models. Relevant in order to trigger dialogues on Fashion, identity, diversity and equal opportunities. But above all to encourage a transformation in society in terms of human rights. “It was one of the most transformative experiences of my life,” says Lais. “Born To Fashion's premise is precisely this: to serve as a platform for breaking prejudices, seeking equality and giving opportunities to so many deserving talents. The most important message that this project reinforced was precisely the human eye for people, how important it is to listen to them and to know their stories. We have been following the industries’ initiatives in search of inclusion and respect for diversity, and Born To Fashion seeks to accelerate this process, which has a lot to evolve. “We still have a lot to do, we need to create more opportunities, because we have a lot of talent. I was very moved during the recordings, following the lives of women so strong.” Despite her enriching experience as a host and the opportunity to explore other areas parallel to fashion, her focus remains on her modeling career. And to use her platform in a positive way, paying more attention to projects that she have been dedicating herself to during the quarantine, namely related to the theme of sustainability. “I want people to be inspired to build a better world” is a great statement and at the same time admirable in its simplicity and sensitivity. And quoting fellow countrywoman Daniela Mercury: “When one of us dances, it's beautiful to see, but when everyone dances, the floor rocks. And so a revolution is made!”

Regarding this issue’s topic, Lais believes that the forbidden transit through very different fields. There is that simpler prohibition, such as not running in the school playground (a rule that she broke, like all children) and there are prohibitions that organize society and where the prohibited has another purpose. Why do we covet what is forbidden? Because it brings with it an element of mischief, and causes a kind of shake to our existence, which is very much governed by rules of all kinds. All children are curious about what they are forbidden to do, it is part of human evolution. “When I was younger, I always followed the rules, but I matured and understood the importance of looking for the reason for each rule and prohibition to exist”, she comments. In relation to Alexandre's education, more than prohibiting, she seeks to make him understand the impact that actions have on him and those around him. “Education asks that limits, common sense and respect for others are always taken into account, so in this sense I try to pass on values that are very similar to all those I had in my house, learning more from example and with didactics, than only with an unexplained prohibition.” That said, what is next for Lais Ribeiro, in addition to the marriage with basketball player Joakim Noah? A fighter and hard worker, an example not only for her son Alexandre, but also for all those who have the privilege of meeting her, even if via the Internet, she replies: “For the future, I only wish for health, peace and love. For life, I am already very grateful. The rest is luxury.” That’s what she said.