English version | That’s how the light get’s in

There is a crack in everything, everywhere, in all beings, living and non-living. It is there, through that small crack, that light, however small it may be, manages to enter. And thus transform what was an apparent error into a detail of the most amazing beauty. 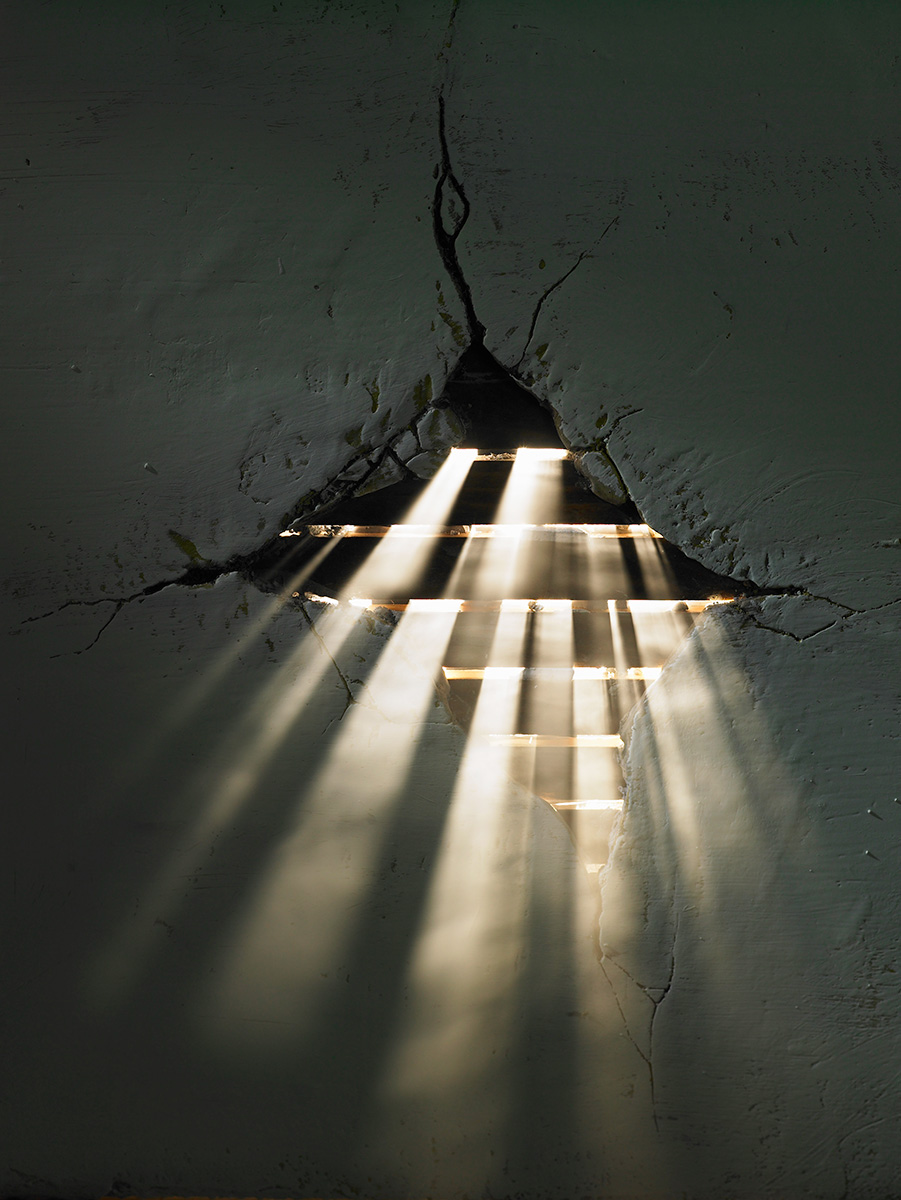 The lyric is, itself, a hymn to redemption. Because it's not just music, it's pure poetry, the kind that, we imagine, the Gods would be able to write. Anthem, track number five on the album The Future, released in 1992, took a decade to be composed. The song is, for lack of better words, a masterpiece. And such a statement is absolutely redundant, were not Leonard Cohen (1934-2016), its author, one of the greatest artists in memory. Because there is a very fine line that divides excellence and genius, and the Canadian overcame it with a candor that is not common, thanks to his words - a mixture of philosophy, whisper and prayer - that are, even today, of the most noble examples of empathy. But let's go back to Anthem, and the verse that brings us here: “There is a crack, a crack in everything / That's how the light get's in” (although commonly shared as “There is a crack in everything...”, the original article contemplates the repetition of the expression "a crack", which reinforces the author's idea). Cohen's warning does not point in the direction of an exit, but of acceptance. Life is imperfect. Let's embrace it. Even in the moments that seem impossible, or in the face of the most bleak scenarios, the moment will come when a fissure will allow us to see the sun. The metaphor serves for the beauty of all things, because the world is made up of a series of entities, which surround and involve us and, in the constant search for any perfection (or justification) for what does not fit our understanding, we think we are thrown into chaos. And we forget that chaos can also have a sublime, peaceful side. In any sphere, even in love: "There's a blaze of light / In every word / It doesn't matter which you heard / The holy or the broken Hallelujah.” Leonard Cohen's repertoire would compile an encyclopedia on the art of facing the crudeness of everyday life with elegance and humility. Because the man who left us precisely four years ago never denied darkness or melancholy, but chose to fight them with sweetness, grace, and an almost transcendent glimmer of hope.

If he had the gift of eternity, Albert Camus (1913-1960) could write, with the precision and ambiguity that the theme requires, a treatise on human existence. If he had the gift of eternity, we emphasize, because the reason for being here, its meaning and its limits, would imply a thousand and one lives, lived intermittently, so that it was possible to suck, in a clear way, or at least evident the naked eye, the dilemmas that affect man's conscience, from birth to death. Camus, who was one of the youngest recipients of the Nobel Prize for Literature - precisely for the “clairvoyant and serious” way in which his work “illuminated” the society of his time - he was excellent at (trying to) establish a parallelism between the complexity of the universe and the absurd to surrender to the fact that we never get final answers about that same universe. His essay The Myth Of Sisyphus, released in 1942, opens with one of the most breathtaking phrases about the paradox of what is it to be/being alive: “I draw from the absurd three consequences, which are my revolt, my freedom, and my passion.” Something remarkable, if we think that the writer produced a significant part of his work in the middle of World War II, one of the darkest periods of the 20th century, where little space existed for hope - or for the light that seems to come through such a crack, however small as it may be. It was also he who, years later, declared (in a book to be published posthumously, Lyrical And Critical Essays) that it is not possible to have love in life without a certain despair for life: “There is no love of life without despair of life.” On its whole, Camus's message is simpler than it appears. Restlessness and revolt are essential to man's experience as a thinking being, because his experience, whatever if might be, it always relative - no two people are the same, so there will never be two ways of thinking, feeling, which are equal. The reason is somewhere between common sense and freedom. Everything else is susceptible to error. It is what defines us, because, even without realizing it, error is something that is, and will  be, constantly around us - because it is also within us. But it is precisely this error, this fissure, that allows us to contemplate the clarity, and the beauty, of everything that surrounds us.

A thousand and one wars may come. A thousand and one explosions. A thousand and one virus of unknown origin. A thousand lockdowns. A thousand hurricanes. This place we inhabit, and which we call home, Planet Earth - him and all his stories and secrets - will be here to the last final point, incessantly, despite everything, imperfect, erratic, incomprehensible. His magic comes from both his wrinkles and his rivers of clear water, it comes both from his dark craters and from his flowering fields. His charm is a mixture of doubt and clarity, of diamonds and rocks, of ruined houses and glorious palaces, of births and deaths, of beginnings and endings. Nothing is lost, everything is transformed, ad eternum, into a return that we can never reach. And this is also a form of perfection - in the most imperfect sense, for us humans. Just before ending his life, Chinese photographer Ren Hang (1987-2017), one of the most brilliant of his generation, shared: “If life is a bottomless abyss, when I jump, the endless fall will only be a way of flying.” The strength of his images would never make one think that this outburst would be the harbinger of what was to come. Because his work screamed creativity, energy, sensuality. Future. Too much future, as far as the future can be measured. And yet, even that was not enough for Hang, adored by critics and the public, to be able to see such a light, however small, that light that Cohen's hoarse voice still sings, in a whisper, in the ears of all lost souls.

What to do when everything burns? Where to look? Which way to go? When it is impossible to see the beauty of things, even the imperfect beauty, the decadent beauty, the beauty that corrodes - and here beauty serves as a metaphor for both salvation and assent - what to do? Read Bukowski. The American writer, poet and novelist, born in Andernach, Germany, is the master par excellence of restlessness. Because Henry Charles Bukowski Jr, or simply Charles Bukowski, wrote without filters, without thinking about reviews or applause, and he did it painfully, as if he poured his heart on a sheet of paper that is already covered in blood and tears. It was there that, affected by an alcoholism that transcended his thoughts and illuminated his spirit, he tore himself to pieces, put himself to the test, mutilated himself. His works are proof of that experience on the edge, that race against time, that constant battle between the mortality of man who, through his genius, tries to be immortal, and the cosmos that contemplates him, indifferent, with the planets and stars and galaxies in constant rotation. The Laughing Heart, one of his most cherished poems, is a reflection of all that was, and still is, Bukowski: “Your life is your life. / Don’t let it be clubbed into dank submission. / Be on the watch. / There are ways out. / There is a light somewhere. / It may not be much light but / It beats the darkness. / Be on the watch. / The gods will offer you chances. / Know them. / Take them. / You can’t beat death but / You can beat death in life, sometimes. / And the more often you learn to do it, / The more light there will be. / Your life is your life. / Know it while you have it. / You are marvelous. / The gods wait to delight / In you.” In an edition that celebrates the beautiful side of error, how serious will it be to leave one of the most beautiful texts on human imperfection in its original form, without the boldness of translation - is there any other way to castrate the feelings and emotions of its author? Google is just a click away. It’s where we search for help in hundreds of stories, like trying to pay homage, in the same score, Cohen, Camus, Hang and Bukowski. None of this makes sense. But there will certainly be a light that penetrates all these hollow words, hollow because they are poor at the foot of so imposing gentlemen: the light of attempt, the light of will. None of this makes sense. But, like the stars, which to be born need the collapse of a gas nebula, here we collapse before our defects and we accept, with open arms, our fall. This is not our destruction. This is our birth.