Put a crystal ball between his hands and call him a fortune teller: in 1984, George Orwell left his prediction for the future, and it couldn't have been more spot-on. Big Brother is watching you. 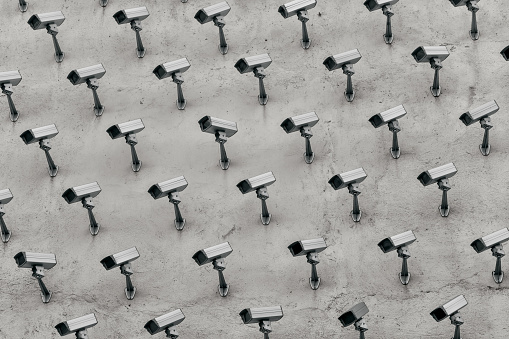 We are being watched, and there is little room for doubt in this statement. I have had a good deal of experience that leads me to accept the reality of our contemporary digital society. Before the conspiracy theorist labels appear, let me make it clear that I am not talking about government surveillance, Orwell style, I am talking about the electronic devices that we gladly surround ourselves with. The moment I realized the seriousness of the situation was no more than two or three years ago, I was already well acquainted with the cookie policy used by most of the apps on my smartphone, which carefully curate ads for fast fashion brands, jewelry, and the occasional camera. I remember having a conversation about the walks I used to take in the Arrábida Mountains with my dog - a little 30 kilo beast named Óscar Manuel - while my electronic appendix was lying on the table, with the screen locked.  I won't have talked about it for more than ten minutes, but it was enough to see that when I opened Instagram, the ads that were thrust upon me were no longer for clothes and accessories, but for dog collars and leashes. An overwhelming feeling of euphoria washed over me. I had been told stories before about cell phones that (allegedly) eavesdrop on our conversations, and I had my suspicions too, but here I had before me the blatant proof that my smartphone was snooping. There was no other explanation, I had neither searched for anything related to animals nor had I talked about it in messages. Even without going to the extreme of assuming audiovisual surveillance (although at this point it is no longer just an assumption, but we’ll get there), we have proof of this espionage in something as simple as Google: the company collects everything it can and, in the end, draws up a profile of the user with age, gender and tastes, available for consultation on the search engine's website.

Now, how does one go from saving our research to the act of miraculously activating the microphone of the device from which we access the Internet? It is difficult to pinpoint the beginning of this chain of dominoes, but we know the moment when our eyes were opened to this reality. The date was June 9, 2013 and The Guardian had just published an interview with Edward Snowden, recorded in Hong Kong, in which the former employee of the NSA (National Security Agency, in the United States) revealed that the state institution collected data from the American population through their communications, meaning messages and calls, be it in text, video or audio. According to the analyst, the government's purpose has always been to neutralize threats to national security, but the means to this end was through generalized surveillance. The greatest fear of Snowden, who has been in exile in Russia since 2013, was that nothing would change. Since the stunning revelation, there have been some changes, such as increasing transparency in the various data collection policies, but when it comes to preserving privacy, little or no progress has been made. The trend seems to be to take this responsibility out of the hands of companies and place it in those of consumers who, now better informed, must make the decision to accept the terms of use or refuse and not be able to use an application at all. Such is the case with Instagram, which in December 2020 updated its data policy to inform of the collection of information "from the content you provide through our camera feature or your camera inventory settings, or through our voice-activated features." Although it is not clear, what this seems to mean is that we are living in a kind of "digital panopticon" in which incessant observation is the rule - a technological and fragmented version of the concept formulated by Jeremy Bentham. The philosopher conceived, at the end of the 18th century, the formula that guaranteed constant surveillance in a prison setting: the "original panopticon" is a circular architectural structure with a tower in the center. In this establishment, the prisoners' cells are scattered around the circular walls, and in the central tower is the guard post, with a peripheral view of all the cells. According to Bentham, the idea is that the prisoners cannot see the guard, thus being afraid that they are being seen, ensuring good behavior. Therefore, even if they are not, in fact, being watched, the inmates comply with the rules, coerced by the feeling that they are being watched.

In this day and age, it would be difficult to materialize this concept, but the truth is that we are living it in a slightly different way. Instead of being centralized, this vigilant authority is fragmented, spread not only by the electronic devices we use every day, but in stores, in restaurants, on the streets, and instead of feeling threatened, we are submissive and, in a way, we desire this omnipresent observation. The logic is compelling: I'm going to be bombarded with ads on social media, so I might as well let myself be analyzed and have content tailored to my needs. The problem with this digital panopticon is that it goes through much more than collecting and storing our Internet searches, the more haunting issue is that all the devices that make our lives easier somehow have this catch. And, come to think of it, there's hardly a device that doesn't treat data like the most valuable currency on the market: we use apps that record our sleep patterns, smartbands that store our vital values, artificial intelligences that have access to the speakers and lamps in our house, electronic punching bags that adjust the intensity of the training based on our physical strength and even vibrators that store in an app all masturbation sessions. Put it this way, it becomes unpleasant - and somewhat repugnant - to have such intimate information recorded somewhere on the Internet, but the fact is that this omniscient and omnipresent authority has benefits that many of us are not willing to give up. After all, unlocking your phone with your fingerprint or face is a must-have convenience, even if it means that Apple knows us better than we know ourselves. It is practically a given that thousands of these small companies are watching us via cell phones, computers, and smart devices. When it comes to government institutions, on the other hand, it is rather more difficult to find evidence of a panopticon - with the exception of CCTV. Although these are often private security cameras from stores, offices, or even installed at the entrance of residential buildings, we know that the state easily has access to this footage for judicial purposes. Even if the recordings are not all handed over to a state entity, the fact is that, adding up all the CCTV cameras, the likelihood is that we are being filmed practically all the time. The only place we can get away from the lens is in the comfort of our own home, and yet some people have this surveillance even indoors.

Closed-circuit has its advantages too - right from the start, it's thanks to surveillance cameras that YouTube is full of compilations of catches, funny falls and fails. When it comes to our security, CCTV has the potential to make a difference in the judicial system (in an ideal world where bureaucracy would be significantly reduced). When used in court, this footage has the power to exonerate or convict someone, and a study done in 2019 proves the influence of this evidence: according to researchers Anthony Morgan and Christopher Dowling, in Australia cases in which CCTV is requested and used in court are substantially more likely to be solved. In fact, a bus surveillance camera was crucial in finding Sarah Everard, the young English woman who was raped and killed by a police officer in March 2021. Whether on a macro level (for generalized security) or on a micro level (in the little day-to-day facilitations), constant surveillance has its benefits. Okay, we are capable of seeing the good side of such a digital panopticon, but in recent years we have witnessed the transformation of this paradigm that, besides conditioning our privacy, has been adapted to become a source of entertainment. We think of everything that is reality TV, Big Brother and its variants: a group of people lock themselves in a house for months and there is a channel on TV where we can follow everything that happens inside through surveillance cameras. And the fact is that this is a type of content that many people make a point of following - the premiere of the new season of the Portuguese edition of Big Brother, last September 11, was watched by over a million viewers. Even fiction itself is already making parodies of this meta-reality, in which we, real people, watch fictional characters watching another fictional character, whose life is broadcasted 24 hours a day through cameras in everything and anything (we are talking about “The Truman Show”, the comedy that keeps alerting us to this highly realistic and realizable situation). In a world where we are all Truman Burbank in one way or another, shouldn't we, too, want to get off the set? Maybe not. We have nothing to hide, and personally I don't feel ready to go back to the archaic pre-app age where I had to write down, on a paper agenda, when my period came.

Translated from the original on The Butterfly Effect issue from Vogue Portugal, published October 2022.
Full story and credits on the print issue.