English version | Your Fire is not Enough 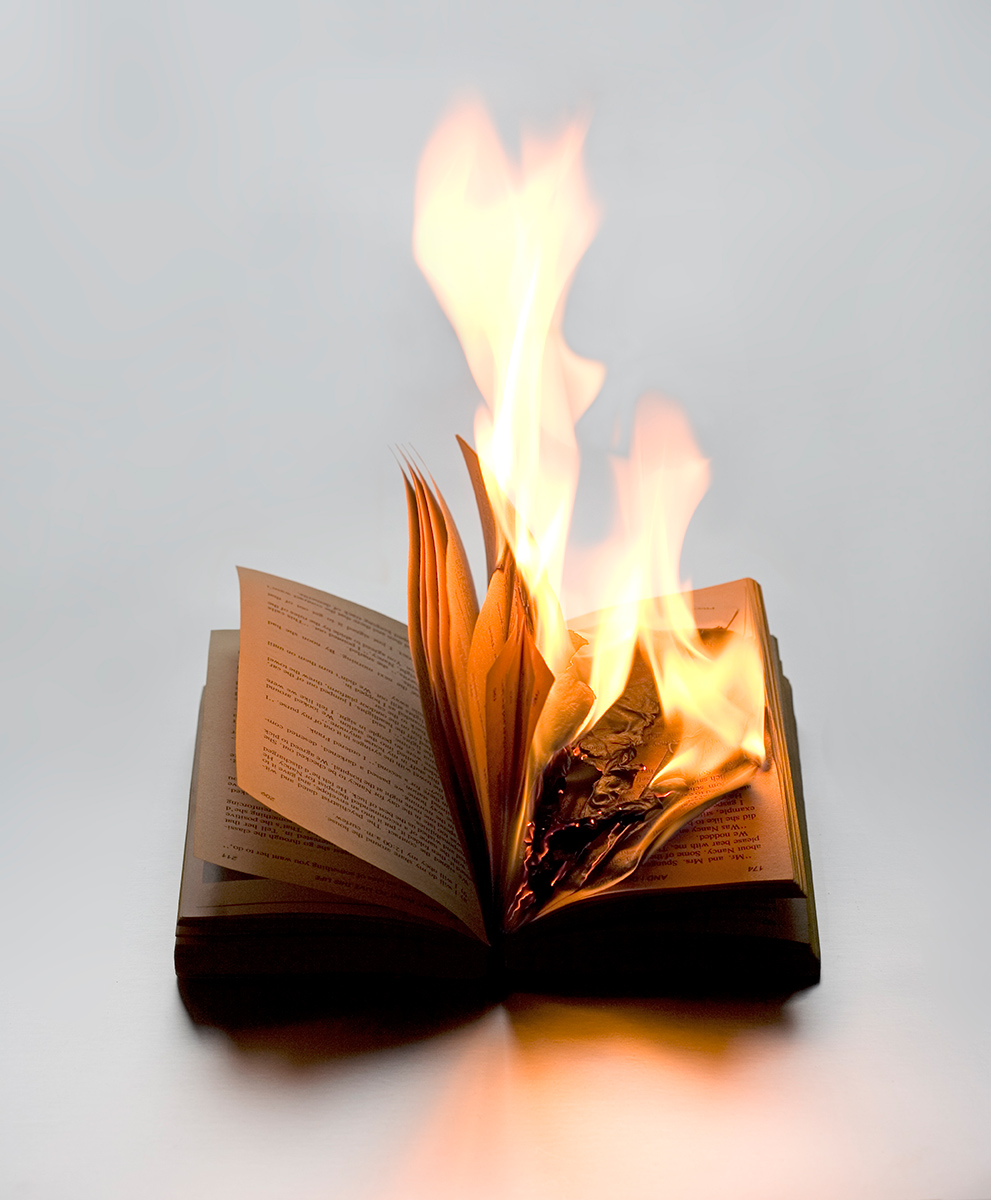 “There is no such thing as a moral or an immoral book. Books are well written or badly written. That is all.” Although I sign it off with no reservations whatsoever, I am not the one saying it. The author of these words is Oscar Wilde, in the preface to the 1892 edition of The Picture of Dorian Gray. The gothic-philosophical, today regarded as a classic in universal literature, was firstly published on Lippincott’s Monthly Magazine in cut-up versions the author would reveal. The thing is this work was susceptible to causing distress and even offense amongst prude readers, or at least that was what the publishers thought. This moralist concern with general welfare, that fear of the possibility that it was perhaps, in the readers’ eyes, too gay, for example (or mostly), was what caused 500 words to be taken out of the original text. The editor himself would have said about this concealed censorship, that the book would only be printed when it was “appropriate even to the most fastidious of tastes.” Even if cut and censored in more than one version, The Picture of Dorian Gray was worth all the insults and flabbergasted appraisals from the audience and critic. Even amputee and softened up, Wilde’s original manuscript was taken down the shelves a little all over England because it was considered to be a bunch of things, always in between inappropriate, offensive and scandalous. Oscar Wilde, who was not someone that would take things quietly, did not allow for prude spirits and souls destined to mild existences to walk all over him. He took his quill – actually, he would have sat down to typewrite – and wrote a preface in defense of his word. In that text, a real apology of artistic freedom and the disentanglement between the work and the creator, Wilde constructs a manifesto from which we underline one quote: “Vice and virtue are to the artist materials for an art. […] All art is at once surface and symbol. Those who go beneath the surface do so at their peril. Those who read the symbol do so at their peril. It is the spectator, and not life, that art really mirrors. Diversity of opinion about a work of art shows that the work is new, complex, and vital. When critics disagree, the artist is in accord with himself.” The author finishes off his preface with an apparently laconic – and I won’t dare to go beyond the surface at my own peril – “All art is quite useless.” History and time would end up placing The Picture of Dorian Gray on the pedestal it deserves. In 2011, The Picture of Dorian Gray – An Annotated, Uncensored Edition, was published, an integral version of this work, edited and annotated by Nicholas Frankel.

A writer can be, as it is known, a very bad influence, even for those who don’t read their work. Or, perhaps, precisely for those who haven’t read their work and come to know through others – who might have read it – how much of a libertine, inconvenient, offensive, agitated, and finally, dangerous, a writer is or can be. Sometimes writers can really have no shame, in case what Wilde wrote in his magnificent preface about vice, virtue and art, slipped our mind. And that is why so many times, writers, by trying to dive into the depths of what it means to be human – that creature who is often weak, frequently a coward, almost always a pervert, infinitely cruel and eternally selfish -, end up bringing to the surface the outrage and offense, turning themselves into easy victims of censorship and outlawing in the name of morals and good practices. It’s better not to disturb the morals and practices of human beings who are perfectly established, relaxed as a cucumber, comfortable with their own sins as long as no one reveals them. It is not advisable to take a mirror to reflect people’s interior motives, exposing them to their demons, fragilities and temptations. Vladimir Nabokov knew it well, he who had the audacity to write Lolita, a novel that is mostly complex, but also erotic, between a middle-aged professor and a 12-year-old girl. Naturally, the theme is not exactly light, and the literary analysis varied according to if the readers and critics were able or not to separate the book from the writer who wrote it. If for many it was an absolute masterpiece of the XX century, Lolita was also banished and prohibited in France, England, Argentina, New Zealand and South Africa.

If Nabokov’s work was – and is still to this day – contested and in many places prohibited, then Gabriel Matzneff’s is curiously accepted pretty much everywhere, especially in his country, France, (or at least it was until French courts called him to the stand). The case of Matzneff, whose whole work revolves around the themes of the debacle, dandyism and quite openly, pedophilia, is quite different from the previous one. The thing is that Matzneff really mixes the art and the artist: numerous were the number of diaries he published with narratives that wondered in between fiction and his autobiographic experience – the writer and editor Vanessa Springora recently published Consent, a description of the relationship she had with Matzneff when she was 13 years old and him 50. The writer, who even went as far as writing defense essays on pedophilia (Les Moins de Seize Ans), still was praised and complimented by his peers for years. For much less than what Matzneff did, Ulysses, by James Joyce, was not only banned but burnt in the USA, in 1918, in Ireland, Joyce’s homeland, in 1922, in Canada, on that same year, and in England, the following year. The English banned the book in 1929. All this fervorous reaction was due to the passages where the book describes, with a level of thoroughness that is as exaggerated as it is brilliant, the human anatomy, along with everything it might – I stand corrected: with all it can – makes us imagine. “Obscene” is a term that resurfaces whenever, throughout the decade of 1920, someone – a critic, an academic, a writer, a reporter or any other traditional prude whose opinion mattered enough for it to be printed and published – referred to Joyce’s work. People say someone’s trash is someone else’s treasure: it’s not that hard to deduct what within Ulysses made so many want to climb up walls and burn down bookshops, it was the same that compelled various others to identify a plain touch of genius, a superior writer, one of the best in the history of literature.

“You shall not invoke the name of the Lord, your God, in vain.” The commandment is clear and simple, despite the diversity of versions – “you shall not take”, “not use” – which, naturally, have come about ever since the day when, there on Mount Horeb, Moses received in two tombstones the divine words. However, the assertiveness of the message seems to have not been enough to stop writers such as John Steinbeck from fulfilling such a simple rule. Steinbeck, whose work includes various books that were targets of censorship – The Grapes of Rath was burnt due to its improper language, for example -, saw Of Mice and Men banished, contested, taken out of circulation for (among other unacceptable offenses such as “being an obscene book”) “containing profanity” and “using the name of God in vain”. The name of God distresses plenty of people. It troubles even institutions and the State itself. In Portugal, it was The Gospel According to Jesus Christ, the novel by José Saramago, rattled the country, unleashing censorship maneuvers, on one hand, of general and mainly intellectual revolt against that same censorship, and on the other hand, but above all the surprising recovery of the term “Inquisition” back to the current lexicon. The year was 1992 and the Secretary of State for Culture – under the rule of Cavaco Silva, culture, the famous nest of lazy artists, was not even worth a ministry – had to submit a shortlist of candidate work to the European Literary Prize. Saramago’s book was an obvious candidate for the list, at the very least. António de Sousa Lara, the State’s subsecretary for Culture at the time (slowly now: sub-se-cre-ta-ry), who confessed in 2017 in an interview to the paper Observador that he had not read the book (only some of it after all, according to him: “Someone had read it and said, ‘this guy is a prick, have you seen what he wrote about God?’ And then I went and read that bit. And it was offensive)” -, said, “with this junk, Saramago is not going on that list, over my dead body”. And he didn’t. After this decision, the writer left Portugal and moved to Lanzarote, in the Canary Islands. And won the Nobel Prize for Literature, in 1998.

The spell of time

We’ve gathered that obscenity and vulgarity distress a lot of people and that brushing upon religion even more so. The Color Purple, by Alice Walker, to Kill a Mockingbird, by Harper Lee, the Catcher in the Rye, by Salinger, As I Lay Dying, by Faulkner, going through the work of Hemingway, Burgess, Vonnegut, Burroughs or Miller, the conservative and imperial necessity of preserving good book-table manners took their victims, set up targets, burned down pages while trying to strangle the creative freedom of those who wrote them. There were even written pieces whose ideological substance – oh!, these writers again, those wizards that charm their readers only because they can align a few words and make them make sense – were the targets of the most furious pursuits. George Orwell with 1984 or Animal Farm, William Golding, with Lord of the Flies, or Aldous Huxley, with his Brave New World, all conceived dystopias that unleashed, in many latitudes, the most reactive of dreads. Thankfully, writers have had the help of yet another spell, besides that witchcraft they wield when throwing words onto a piece of paper and, abracadabra, puff, a text, there you have it, a text! It’s called time. Time, which consumes and destroys all things, is in charge of revealing the things that truly deserve to prevail and endure. And the great masterpieces of universal literature will always resurface, despite the many attempts of the guardians of good practices and adequacy inquisitors to stop it, prohibit it, exscind it, or – as so happened in the also censored Fahrenheit 451, by Ray Bradbury – burn it. Always.